“Excuse me sir. You’re going to have to sit down. Or you can stand but on the side.” I was flabbergasted to say the least when I heard those words from an authoritative tall man who came all the way to the front of the stage where I was standing by myself during the first one or two songs played by Canadian veteran hard rockers Helix. Talk about ruining a concert goer’s experience! I had never been told to sit down before at a rock n’ roll show. It just seemed so contrary to the spirit of rock n’ roll. 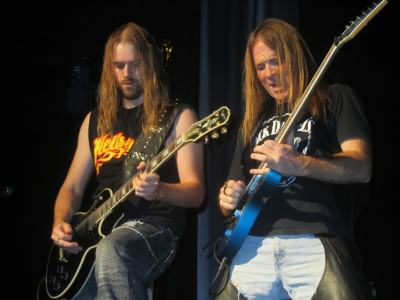 The venue that Helix were playing at was the Seneca Queen Theatre, which is really an attractive old styled movie theatre with what appears to be 302 seats (according to the venue’s online seating chart) spread over 12 rows. The mostly older looking crowd stayed firmly seated in their seats when Helix launched into their first two songs of the night: “Bastard Of The Blues” and “Wild In The Streets.” About a month ago, I had been extremely pleased in being able to purchase a front row ticket — and I emphasize front row — almost right at the centre of the stage. This was my first time ever that I had been able to purchase a front row seat for a concert. As soon as Helix launched into their first song, it seemed like I was the only one who got out of his seat to get a bit closer to the stage. Being my first time at the venue, I did notice that there were a few people standing to the side but I did not think anything of it. Either someone complained to the venue’s owner and/or manager about their view being blocked by the lone guy standing away from his seat or it is simply the venue’s policy to have people attending concerts seated in their seats! Whatever the case, I grudgingly remained seated for the rest of Helix‘s performance not wanting to give up my great front row vantage point to go rock out from a standing position from one of the ends of the rows of seats. 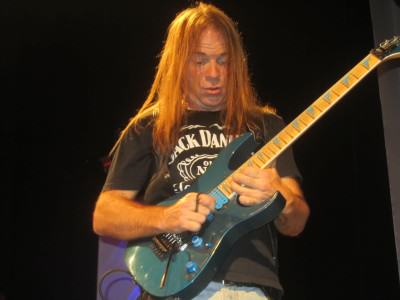 Clearly, what should have happened is that the venue should have let me stand near the front of the stage and simply advise the other patrons to get up from their seats themselves if there were any complaints that I was blocking some patrons’ views. After all, the stage was probably about waist height so my standing did not exactly completely hinder others’ vantage points of the stage. It also set a very bad precedent for the rest of the night given that the crowd — or the great majority of the crowd — stayed seated for Helix‘s entire set. Sure, there were a few people standing for portions of songs but they eventually sat back down likely anticipating someone coming to tell them to sit down. Although I still enjoyed Helix‘s set, I would have enjoyed it a lot more if I could have been standing at the front centre near the stage rather than seated in a front row seat with the potential of suffering from neck whiplash by the end of the night. 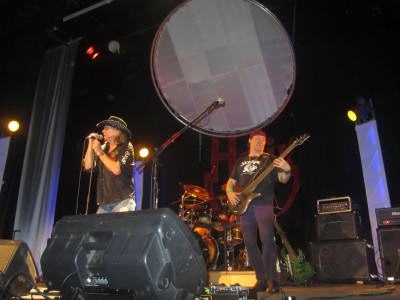 As much as my concert experience this time around was hampered by the venue’s seating policy, Helix were the consummate professionals putting on a kick ass performance and rocking out despite the mostly seated concert goers. Helix‘s set started off slowly with the title track to the band’s new album Bastard Of The Blues, which has a slower bluesy feel to it. However, it seemed that Helix were firing on all cylinders by the time that they launched into their next two songs “Wild In The Streets” and “Kids Are All Shakin’.” Helix‘s lead vocalist Brian Vollmer addressed the crowd numerous times between songs including commentating early on that bassist Daryl Gray — who looked a lot slimmer and leaner than when I saw Helix back in April 2015  — had just recently had open heart surgery. I always thought that recovery from these types of surgeries took some time but you could not tell that Gray had any such surgery as he was a bundle of energy throughout the night. Funny enough, after the third song was played, Vollmer announced that the band would be playing the new track “Even Jesus (Wasn’t Loved In His Hometown)” before guitarist Kaleb Duck looked somewhat agitated as he reminded Vollmer of the next scheduled track to play. Vollmer then humorously explained that someone had taken his setlist for the night — while looking towards a smiling guitarist Chris Julke — given that this person had forgotten their own setlist. This was the sign of true leadership from Vollmer in giving up his setlist to a bandmate and then having to take the fall for that bandmate! 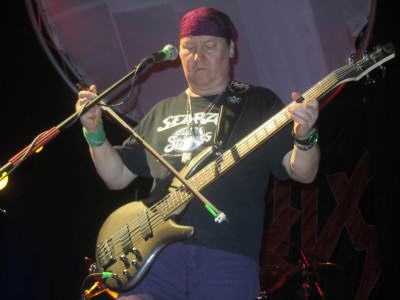 After playing the surprisingly good “Get Up” — which unfortunately did not get the crowd up on its feet likely due to the venue’s apparent “sit only” policy — Vollmer explained that the new song “Even Jesus (Wasn’t Loved In His Hometown)” was actually in reference to the band in its own hometown. While I have never seen Helix play in their hometown, I have seen the band play within a couple of hours from their hometown and have always found the “hometown” audience’s reaction to the band somewhat puzzling. For this last show, the venue is to blame for hurting the atmosphere of the show but it seems to me that a great band such as Helix that has been around for more than 40 years should get more love from their fans that are within a few hours striking distance from the band’s hometown. As Julke recently and candidly advised me in an interview, some of the hometown crowds are sometimes “hit and miss.” I have never been crazy about any type of solos but seeing Gray play a bass solo partly with a violin bow is pretty cool and original! What struck me while listening to Helix play was just how many great songs that the band has in its repertoire. Despite playing a whopping 21 songs on this night, there are at least ten other songs that the band could have easily played such as “Dream On” and “The Storm” which would have most likely went over really well with the audience. Although the setlist turned out to be quite similar to the one that the band played back in April 2015 when I last saw them, the order of the songs had been substantially changed which gave the impression that it was like a brand new setlist — a crafty move by a veteran band! 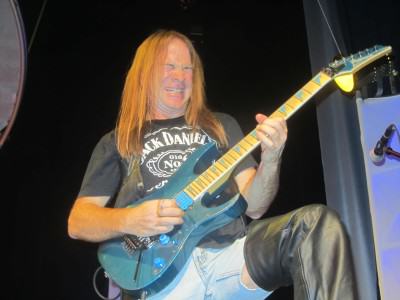 It was really for the most part just one great song after another from “Gimme Gimme Good Lovin'” to “Heavy Metal Cowboys” to “(Make Me Do) Anything You Want” the latter which prompted a lot of couples to start dancing together. It is always a weird sight for me to see but I was not surprised this time compared to when I saw this occurring the first time I saw Helix play at The Legendary Red Rooster in Burlington, Ontario, Canada back on March 25, 2011. The great songs kept coming with “Deep Cuts The Knife” and one of my favorites, “I’m A Live Frankestein.” There were a couple of tracks that I was not that fond of such as “Danger Zone” and “Does A Fool Ever Learn” but you can’t expect to be excited about all the songs when a band plays 21 songs in one night! Funny enough, the biggest pop from the audience came when Vollmer asked the crowd if there were any “old school rock and rollers out there?” Vollmer was also pretty funny when he asked the crowd if anyone was going to be attending the next Monsters of Rock Cruise, which Helix would be a part of, but upon obtaining some crowd feedback, he advised that wives and girlfriends did not count! Other song highlights included “Dirty Dog” and the set closer “Rock You” which prompted two people that were seemingly frustrated having to sit in their front row seats next to me (due to the seating policy) to get out of their seats and rock out while standing. I was surprised to see that they were not asked to sit down although they did not remain standing that long. 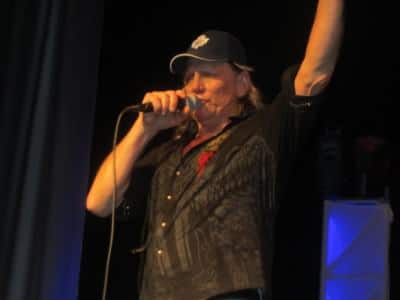 For the encores, Vollmer explained that he was a long-time Toronto Maple Leafs fan since 1957 — we’re talking hockey for those outside of Canada — and that it had been a downhill slide for the team ever since. Helix then launched into their aptly named tribute song to the Leafs with the super long title — “All I Want For Christmas Is The Leafs To Win The Cup” — which had Vollmer don a Leafs baseball cap given to him by a fan for the occasion. For the second last song, Vollmer explained that the song was written in only 30 minutes and that most good songs tend to be that way before launching into one of my favorite Helix songs — “Good To The Last Drop.” Helix closed off their excellent set with a rousing rendition of “No Rest For the Wicked.” 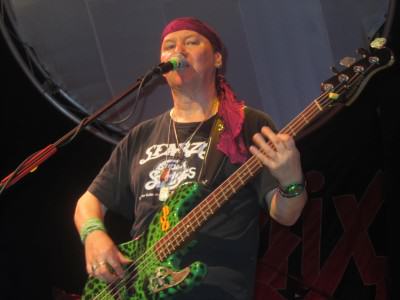 Vollmer then announced to the crowd that the band members would be coming out after the show near Helix‘s merchandise table to sign and take whatever photos that people wanted and that people did not even have to buy anything for the band to sign stuff. As usual, the Helix merchandise table was a veritable smorgasbord of Helix memorabilia and music at reasonable prices and just too hard for me to resist. This time around, I purchased the new album Bastard Of The Blues and A Heavy Mental Christmas, the latter since we are getting close to Christmas! I also got to finally meet Julke whom I had interviewed by telephone less than two weeks ago. Julke was every bit as nice in person as he was on the phone and he went out of the way to arrange for me to get photos with him, Vollmer and Duck (thank you Chris). Gray and drummer Greg “Fritz” Hinz did not seem to be around yet. I should note that while Julke put on another spirited and enthusiastic performance just like when I had previously seen Helix play back in April 2015, this time I thought that everyone in the band seemed to have the same type of Julke level enthusiasm while playing. All in all, it was a great night of rock and roll from a great veteran hard rock band.