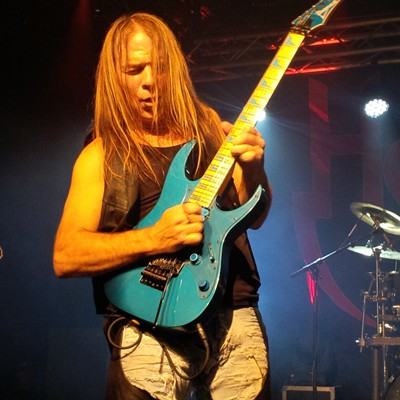 Benefit concerts… Toy drives… Christmas gigs… Helix may well have found a niche when it comes to playing all over the province of Ontario in Canada. This time around, Helix were the headliners at The Ranch in Barrie — which is about one hour north of Canada’s mega city of Toronto — for the “I Rock For 911 Benefit Concert”. The concert was to provide a community salute to and celebrate the people handling challenging professions in healthcare, corrections, military and first responders, with any proceeds going towards “Children’s Wishes” and “I Run & Rock — United by Trauma”. While heavy metal may not have the best public image overall (who can’t remember the folly of the PMRC’s filthy fifteen list, with nine of the songs being provided by “heavy metal” bands), but Helix are really a feel good story these days, getting chosen to headline one benefit gig after another.

The downside for me with Helix playing in Barrie was that the show was an hour away from home and, as seems to be the case with any hard rock band that does not have the mega status of a Van Halen or Judas Priest, the headlining band would only hit the stage later in the evening. I don’t mind the late starts on a weekend, but only getting three hours of sleep heading into a workday is always a consideration when attending these far away performances. In any case, I was glad I attended on this night, as you will read, and as often is the case I find that I have a surge of energy the next day from the high of a great concert. 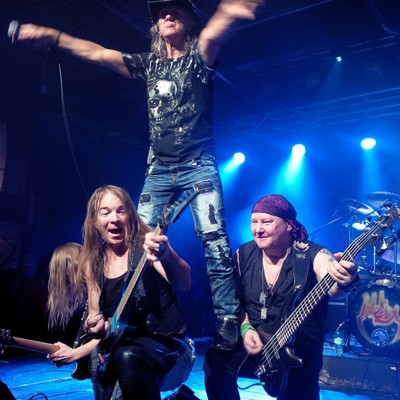 With some rather quick driving, I made it to The Ranch a little after 10:30 pm and met my friend and huge Helix fan, The Meister, who was celebrating his birthday — I believe his third in a row at a concert/gig. Having never been to a concert of any kind in Barrie, I have to say that I was very impressed with the size and overall venue of The Ranch. Although it bills itself as “Canada’s Largest Country Bar”, The Ranch has all of the attributes of a great hard rock and heavy metal concert hall and I hope to see many more concerts in this venue.

The obvious downside of playing a benefit concert, for whichever bands are booked to play, is that usually a good portion of the audience might not be fans of the music a particular group plays. Sure, the organizers try to get a headlining band that will please a majority of the benefit attendees, but the reality is that when Helix hit the stage it seemed like there were only a few of us there specifically to see the seasoned rockers. What that meant was that it was very easy to get right front and center inside the massive open concept venue which probably easily holds over 1,000 patrons. Whether Helix are playing in front of a handful of diehard fans near the stage or a packed sold out venue, you really can’t tell and that is a true testament to how professional this band remains 41 years after they first started. 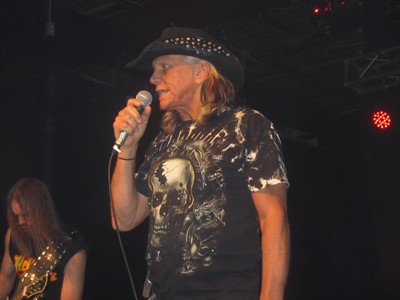 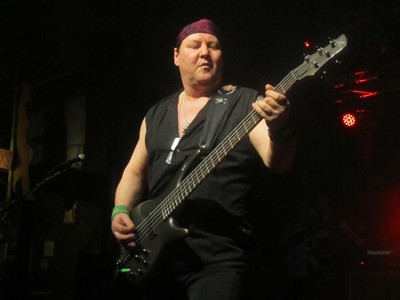 Helix hit the stage with a double blast from the past in the form of “No Rest For The Wicked” and “Wild In The Streets”. The first time I had seen Helix live was more than four years ago at The Legendary Red Rooster in Burlington, Ontario and the one line-up change since that time has been the addition of guitarist Chris Julke, who has taken the spot of Brent “The Doctor” Doerner. I have to say that I thought Julke stole the show — not because of any grandstanding of any kind — but rather because he was so into it and his enthusiasm level while playing was off the charts. Julke‘s constant smile made it seem like he was living the dream while playing on that stage and his various facial expressions while tearing it up on his guitar were entertaining and a lot of fun to watch. It’s not that the guitarist’s bandmates were not into the performance on this night, as I thought lead vocalist and band founder Brian Vollmer, bassist Daryl Gray, guitarist Kaleb “Duckman” Duck and to the limited extent that I could see drummer Greg “Fritz” Hinz all put in strong performances, but Julke‘s enthusiasm was something else — and the guy can certainly play the guitar as well!

As is often the case with a veteran band such as Helix, who have a new record that came out in the last year or so, they played a few tracks off their new record ‘Bastard Of The Blues’ while regaling the audience with classic after classic (fifteen to be exact) from their “golden” era — which I consider to be the five albums from ‘No Rest For The Wicked’ to ‘Back For Another Taste’. Helix’s new songs from ‘Bastard Of The Blues’, namely “Screaming At The Moon”, the title track, and the aptly named “Even Jesus (Wasn’t Loved In His Hometown)” all sounded pretty good, but I must confess I wasn’t that familiar with those songs as I have yet to pick up the band’s latest release (although I did listen to the last two mentioned tracks a couple of times prior to the show). My favorite songs played on the night were logically my preferred Helix songs including the live stalwart “Dirty Dog”, the more commercial sounding “Kids Are All Shakin'” and one track that I was not expecting to hear, “I’m Alive Frankenstein”. 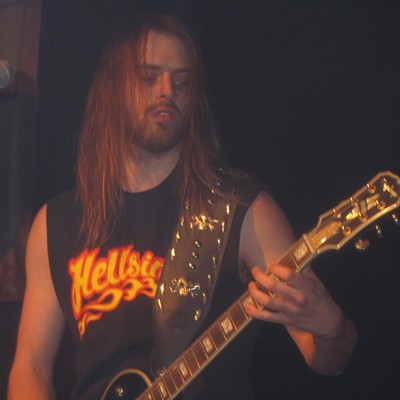 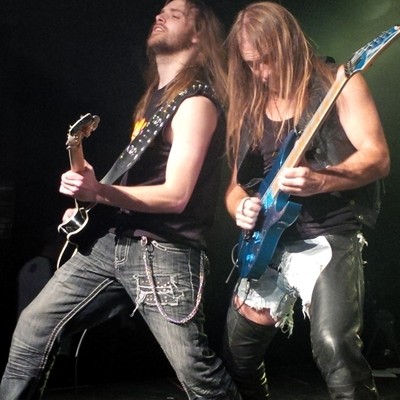 What did surprise me was how much I enjoyed some of the other songs played during the night, ones I might not be into that much otherwise. Songs such as “Deep Cuts The Knife”, “When The Hammer Falls” and “Heavy Metal Love” really seemed to come alive on stage and it helps that all three have that sing along factor to them. While some tracks sounded better live, there were a handful (and most notably one) which I thought did not live up to their potential. Vollmer‘s voice has more than stood the test of time after over four decades of singing, but I did notice that there were a few song verses where he had “switched” his style to perhaps conserve his voice. The most evident were the verses for “Running Wild In The 21st Century”, which sounded pretty different and lacked the oomph that you can hear on the studio version. One song I would have loved to hear live was “The Storm”, and although The Meister and I screamed the song’s title on repeated occasions, it seemed like none of the band members heard us and the odds of Helix altering their setlist simply because two people at the front were screaming seemed unlikely. In fact, I have seen where certain other frontmen, who will remain nameless, have looked quite annoyed at hearing song requests from the audience.

After a whopping twenty song set, if you include the entertaining bass solo from Daryl Gray (who played his bass with a violin bow at one point) and the dual guitar solo from Julke and Duck, it was great to see Helix come back for an encore. First up was the very good ballad “Good To The Last Drop”, which was good news to me since I thought that they would likely end their set on a more spirited song. It was therefore no surprise that Helix closed off their quality set with the faster “Heavy Metal Cowboys”. Within literally five minutes of ending their show, most, if not all, of the band members were out talking to fans and signing things at their merchandise booth. I usually don’t say anything about a band’s merchandise, but I have to say that Helix have one of the most enticing booths around — t-shirts, mugs, guitar picks, a wide selection of CDs with some at too good to pass prices, and even Vollmer’s autobiography ‘Gimme An R!’ were all available for sale. Just like the first time that I saw Helix more than four years ago, I simply felt compelled to purchase a couple of items. I believe that a lot of credit has to go to the friendly Randy Heywood, who I understand runs the Helix merchandise booth and who advised me that he was the “Randy” in the ‘Gimme An R!’ book I purchased that night.

It may be 41 years since Vollmer first formed Helix, but it certainly appeared from the band’s performance at The Ranch that the frontman and his group have a lot of gas left in the tank! 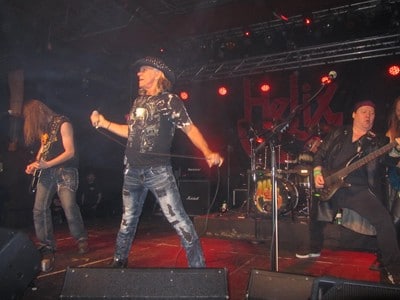