FINALLY! THE HESS EXPRESS IS BACK PLAYING LIVE!

The last time that Hessler offered a live video feed to one of their concerts back in March 2014, I couldn’t resist checking it out given that it was the debut of their lead singer Jessikill. However, the video feed wasn’t great and I pretty much decided not to go that route again. However, with Hessler‘s line-up having imploded since that time with only band founder, guitarist and now lead vocalist Igz Kincaid and bassist turned guitarist Erik Michael remaining from their Ghost Dance line-up, I was very curious once again to check them out via the live webcast being (conveniently) offered by the band.

The occasion for the return of the Hessler machine on stage was the passing of one of their friends, Dee Cain, whom I would learn was like a second father to Kincaid and Michael (more on that later in this review). As it would turn out, this is not the definite new line-up for Hessler as I was advised by Kincaid prior to the show that this was simply a line-up put together so that Hessler could pay tribute to their departed friend Cain. 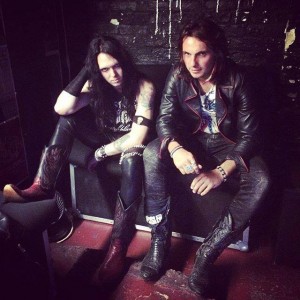 Luckily for me, the live video feed this time around was way better — from what I remember — than the first time that I saw Hessler play from a live video feed. That made the whole experience way more enjoyable until the second last song played when my video feed started — to my chagrin — breaking up and I missed the end of that song and the beginning of the last song “Never Lost My Way”. Perhaps the band was able to squeeze one extra song that I missed between those two songs but my feeling is that this likely did not happen given the amount of time that passed for me to resolve my video feed technical difficulties. Hessler kicked off their show with three songs from their debut EP Bad Blood: “C’mon”, “Kamikazi” and “Windy City Wild Child”. As I have come to expect from Hessler based on previously seeing them live once in person, the band was full of energy and always delivers an energetic and passion filled performance.

The big difference this time around, aside that half the members were new ones, was that Kincaid was handling the lead vocals. Certainly, it has to be viewed as a ballsy and gutsy move on Hessler‘s part and especially Kincaid‘s part because the latter has to replace one of the best female singers of recent times in my opinion: Jessikill. The reality is that if you are going to compare Kincaid‘s voice to Jessikill‘s voice or even the previous former lead singer Lariyah Daniels‘ voice, I will most likely always choose the voice of Jessikill or Daniels over Kincaid‘s vocal delivery that is more of a screaming / talking type of delivery. That being said, with Kincaid assuming the singing duties while continuing to play guitar, the band had a very W.A.S.P. feel to them — which is not a bad thing — and really the ultimate frontman stage presence wise. I have always felt that Jessikill and Daniels — the latter from what I had seen on live videos on Youtube — just did not have the stage presence and confidence to properly address the crowd and/or were overshadowed somewhat by Kincaid who would address the crowd from time to time. This time around, it was clear who was the leader of the band and Kincaid was not shy about telling some stories about what Cain meant to the band. I have always viewed the duties of a band’s frontman as being more than just singing but also being able to properly connect and communicate with the crowd such as what Twisted Sister‘s Dee Snider is so good at doing in a live setting. Finally, Hessler now have that frontman in Kincaid. So whatever Kincaid is lacking in vocal delivery, he makes up in terms of stage presence as a frontman. 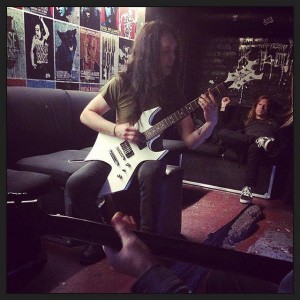 As expected, most of Kincaid‘s comments to the crowd had to do with the  band’s departed friend Cain. Kincaid shared a few stories about how Cain was like a second father to he and Michael. For instance, as a struggling artist, Michael really needed a job and even though he had no bartending skills whatsoever, Cain took him under his wing training him and giving him a job as a bartender. Another story was when Kincaid‘s father passed away in 2012, Cain showed up at Kincaid‘s home a day later with free tickets to the latest roller coaster in Chicago to try to cheer Kincaid up. It was nice to hear Kincaid share some stories about Cain and it certainly was a nice reminder why the event was put together in the first place.

At the end, Hessler played seven songs by my count. Four of those tracks originated from the band’s debut 2011 EP Bad Blood which I found a bit odd given that I consider the songs on 2012’s Comes With The Territory and 2014’s EP Ghost Dance to be superior to the ones on Bad Blood. Nevertheless, Hessler sounded really good and it was interesting to hear Kincaid handle the lead vocals after having heard a female voice tackle those older tunes up to that point. The best tracks in my opinion were the new one “King Of Sting” and the cover of Agent Orange‘s “This Is All I Need” as the music behind those songs seemed really powerful. Hessler closed off their show with “Never Lost My Way” and that was really the only time I felt that Kincaid was struggling to hit certain notes while singing. Kincaid had previously mentioned that he was not used to singing and playing guitar at the same time and it felt like he was getting his ass kicked all over again. So perhaps he was starting to feel it vocals wise towards that last song.

Whatever the case, it was great to see Hessler playing live again — even if it was from a live video webcast — and I am really looking forward to this next new chapter of the band and in particular getting to see them play live in person once again.