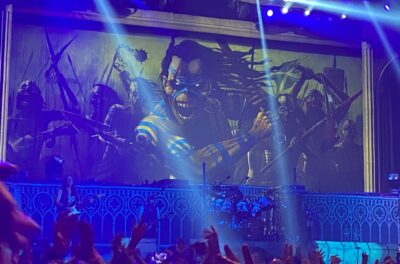 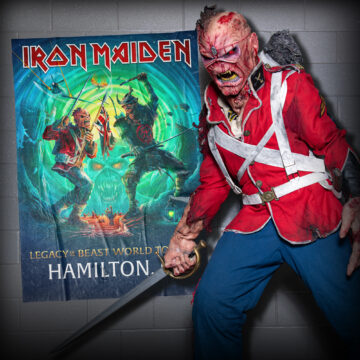 I had bought my Iron Maiden ticket so long ago that at first, I did not remember why I elected to go see the heavy metal giants in Hamilton, which is roughly a 45 minute drive from where I live, instead of at the Air Canada Centre in Toronto (which is only about a 10 minute drive from my place) the night before. In fact, I had assumed that I would be heading to see Iron Maiden at the Air Canada Centre in Toronto until a few days prior to their stop in Canada’s biggest city. It’s only when I saw / remembered on which weekday that Iron Maiden were playing in Toronto, that realized exactly why I elected to go to Hamilton rather than Toronto to see them play live. Knowing that I was likely playing in a tennis league every Tuesday night, I decided to travel a little further on the Wednesday night (to Hamilton) rather than miss out on my tennis league and catch Iron Maiden playing in nearby Toronto.

As it turns out, I ended up playing tennis on the Wednesday evening too but I knew that I could get to Hamilton before 9:00 pm on that night. Of course, that meant missing the opening act but since I had never heard any songs from Within Temptation 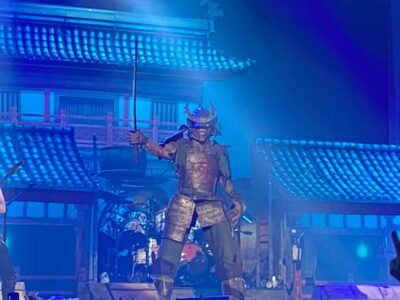 but knew that they were most likely outside the usual genre of music that I like to listen to, I didn’t care if I got to see them play. Ten years ago, I would have probably been there to check them out but life is a lot busier now and catching a set from a band that I know nothing about doesn’t rank high on my list of things to do. Yeah, I know. It might go against the grain of what a “concert reviewer” should be doing but whatever. I am a paying customer and as a paying customer, I wish that Iron Maiden would bring some better opening acts like they did for instance in 2012 when they had the mighty Alice Cooper as the “support” band.

I had already caught Iron Maiden’s Legacy of The Beast Tour back in the summer of 2019 and to their credit, the veteran UK rockers changed their setlist quite a bit since then. Of course, Iron Maiden also had a new studio album Senjutsu to promote so 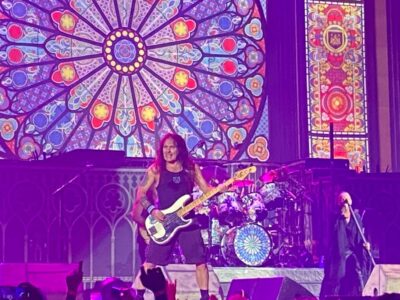 it was no surprise that they played a couple of tracks from that album this time around. Unfortunately, although Senjutsu is a good album and I even placed it at #10 on the Sleaze Roxx’s Top Ten Albums of 2021, there is one really great song (“The Writing On The Wall”) on that record that is worthy of being included in all of Maiden‘s live sets going forward but the rest does not stand up to the band’s classic tracks. Nevertheless, Iron Maiden elected to plays three tracks in a row from Senjutsu to kick off their live set in Hamilton. Sadly, the title track was kind of flat. Sure, the Iron Maiden band members benefited from the crowd’s excitement during the opening song but all I could think about was ‘let’s get through these first two songs” so that we can hear and sing along to “The Writing On The Wall.” “Stratego” was a better simply because it’s a superior song but out definitely is a notch or two any other song that was in Maiden‘s setlist on this night. On the other hand, “The Writing On The Wall” had seemingly everyone in the audience singing along.

Within the first few songs, Bruce Dickinson addressed the audience to proclaim that he was a Hamilton “virgin.” Although he had recently been in Hamilton to do his Spoken Word Tour (I skipped that one due to the pricey tickets — over $100 Cdn per 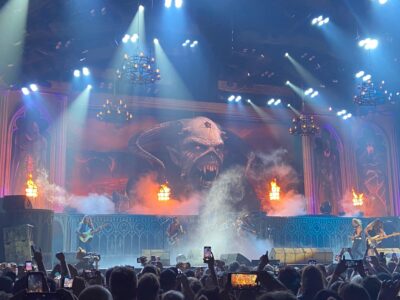 ticket I think), Dickinson noted that Iron Maiden had never played in Hamilton with him in the line-up. Dickinson admitted that Iron Maiden had previously played in Hamilton in 1998 but that was of course with Blaze Bayley fronting the band, which Dickinson understandably did not count. After the trio of new songs had been played, it was truly time to sing along and go back in time with Maiden as the setlist was focused on material dating back 20 years or earlier. I loved all of the remaining songs from the setlist except for “The Sign of The Cross” which I have always found to be one of the weaker tracks off 1996’s The X Factor album.

There were no real surprises in Maiden‘s setlist with one song from their debut self-titled album (1980), three from The Number of The Beast (1982), three from Piece of Mind (1983), one from Powerslave 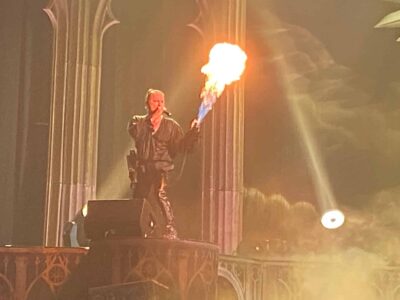 (1984), one from Fear of The Dark (1992), one from The X Factor (1996), one from Virtual XI (1998), one from Brave New World (2000) and three from Senjutsu (2021). Every Maiden band member seemed to be in fine form. Dickinson still has one of the greatest voices of any heavy metal singer out there. The songs were played flawlessly. Obviously, the band members aren’t moving as quickly and as often as they would of when they were in their 20s or 30s but you have to keep in mind that bassist Steve Harris is now 66 years old, Dickinson is 64, drummer Nicko McBrain is already 70, and guitarists Janick Gers, Dave Murray and Adrian Smith are each 65. Accordingly, taking the band members’ ages into consideration, Iron Maiden definitely put on an energy filled set. Dickinson in particular was seemingly always on the move and using props whenever he could from a glowing lantern during “Fear of The Dark” to some flame throwers through one song (I forget which one) to a sword during “The Clansman.”

Overall, I was thoroughly entertained, sang along as much as I could to the many Maiden classics and simply had a great time! At the end of the day, that’s all you can ask for. Maiden continue to set the benchmark very high and I would think that any band would not relish the almost impossible task of having to play after them. That being said, that seems to rarely, if ever, happen these days as Maiden are continuously headlining their own shows and festivals that they get to play. I look forward to seeing Maiden live again and hope it doesn’t take another three years for them to bring their upcoming The Future Past Tour somewhere close to the Toronto area. 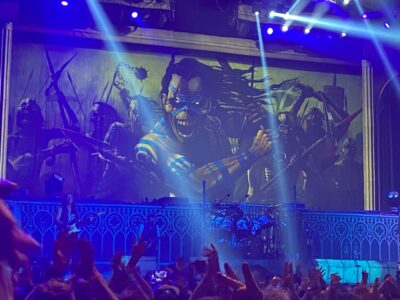