What a difference sixteen years makes! Back in 2000, I attended the Air Canada Centre in Toronto to see Iron Maiden play live in support of their comeback album Brave New World. Ticket sales must have been disappointing because rather than play for the entire arena from the traditional spot where the stage should be, Iron Maiden‘s stage in 2000 was placed to play to only a few specific sections of seats. Bottom line is that Iron Maiden (with Halford opening!) played to about 4,000 people. The crowd for that show sixteen years ago was a rather rough looking practically all male audience. I specifically remember one biker looking dude passed out in his seat before Halford even came on stage. Iron Maiden‘s frontman Bruce Dickinson even complained about the poor attendance to the concert goers who had attended on this night. 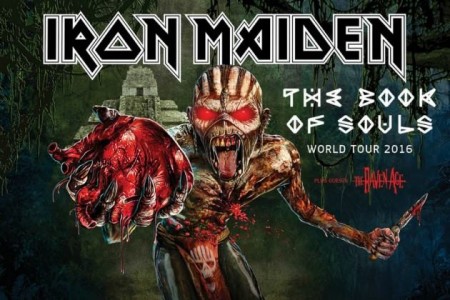 Fast forward almost sixteen years later and Iron Maiden were now playing in front of a packed audience of 14,000 people at the same venue in Toronto. There were now many more females in the audience and the crowd looked more like a Van Halen audience than the rough biker crowd that Maiden had attracted back in 2000. Clearly, Iron Maiden have done a lot of things right since 2000. Even though none of their studio albums (2003’s Dance Of Death, 2006’s A Matter Of Life And Death, 2010’s The Final Frontier and 2005’s The Book Of Souls) have been as good as Brave New World or any of the Dickinson led Maiden albums beforehand, Iron Maiden have done a truly remarkable comeback in terms of their popularity in at least Toronto and likely the entire world. What a difference sixteen years make! 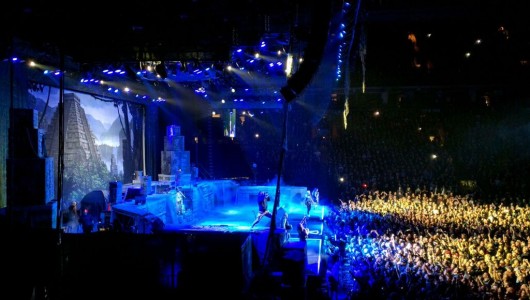 Although I knew a lot of people going to the Maiden show this time around, I ended up buying a solo ticket since my usual partner in crime (for concerts) Eduardo was not sure whether he could attend. A few months later, Eduardo confirmed that he could indeed attend the concert but to his dismay, there were no tickets left by that point. I advised Eduardo to keep trying to purchase tickets every day given that Ticketmaster would likely open up some additional seats closer to the date. As it turns out, that is exactly what happened as Eduardo happily reported that he was able to purchase a ticket to what he had marked as a priority concert to attend. After all, Eduardo did give The Book Of Souls a rave review for Sleaze Roxx about eight months ago. To both our surprise, by the time that we connected at the show itself, we were only six rows apart in section 109 (if that helps for anyone who actually went to the Toronto show). Although my seat gave me a better vantage point (you can tell from our respective photos), it was still rather surprising that Eduardo could be so close to my seat when I had purchased mine months earlier. 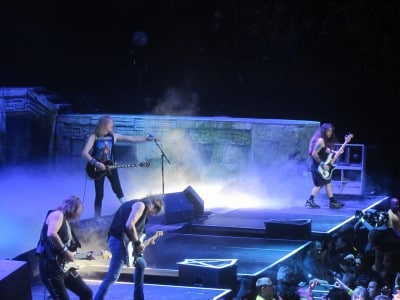 While there is no question that Eduardo has been enamoured by The Book Of Souls album, I have been slower to warm up to it. It is therefore with a little bit of trepidation that I attended the concert knowing full well that the first half of the show would be heavy on material from The Book Of Souls. You see, I simply could not help myself and had to check Iron Maiden‘s set lists from prior shows. That being said, I like all the songs on The Book Of Souls but they just don’t compare to the Maiden tunes from the ’80s and ’90s that I have grown up listening to over all those years. After the customary UFO track “Doctor Doctor” blared through the PA system, Iron Maiden opened the show with the track “If Eternity Should Fail” from The Book Of Souls. A myriad of feelings came over me when the iconic heavy metal giants started with that song since I had the excitement and euphoria of finally seeing Maiden live again after an almost four year absence counterbalanced by having to listen to a song that I honestly did not really like that much. Luckily for me, the rest of the songs played from The Book Of Souls were surprisingly quite enjoyable with “Tears Of The Clown” and “The Red And The Black” really standing out. 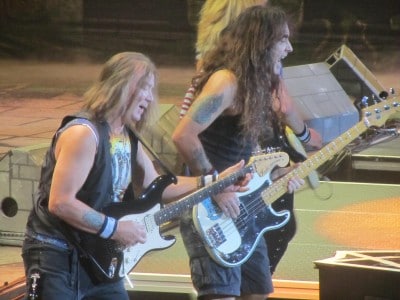 I still remember Dickinson‘s words when Maiden were playing in Toronto back in 2000 where he explained that Maiden were essentially not a nostalgia act, still making relevant new music and that is what we would be hearing on this night. This is also the band that played its entire A Matter Of Life And Death album on that tour before unapologetically playing a sprinkling of older songs at the end. The stage show itself this time around was everything that you would expect from Iron Maiden — colourful, elaborate, steep with history and huge! Based on Mayan history, the stage was impressive to look at. However, I did not feel that I got the full impact of it given my side view of the stage. With the new songs played running at about 49 minutes based on the album’s length time plus probably another five or so minutes when Dickinson introduced a few of the new tracks, this meant that there was likely only one hour left to play some of Iron Maiden’s many classics. The first surprise of the night was “Children Of The Damned” which dates back to 1982’s The Number Of The Beast album. That track always makes me think back to the extra tracks that were on Iron Maiden’s phenomenal Live After Death album (and one of my 12 albums chosen as having stayed with me over the years). 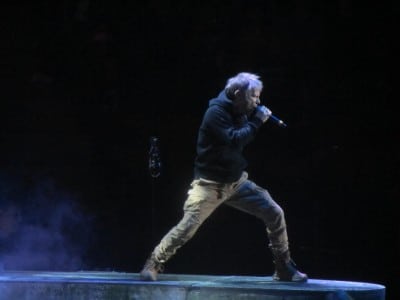 The first “older” track that really seemed to get a loud response from the audience was “The Trooper” which had Dickinson don a red coat military smock while waving a Union Jack flag. “Powerslave” was a nice surprise as well, which saw Dickinson put on some sort of presumably Egyptian mask during the song. Although I had checked the setlist from prior shows a while back, I didn’t remember exactly which songs were going to be played so “Children Of The Damned” and “Powerslave” were still nice surprises. The last six songs were predictably the usual Maiden staples at concerts such as “Hallowed Be Thy Name”, “Iron Maiden” and “The Number Of The Beast.” The best song of the night in my opinion was “Fear Of The Dark” which has one of the best beginnings to any song that I have ever heard. The song still gives me goose bumps and having the seemingly entire crowd sing along “Ooooh Ooooh Ooooh” to the music is always cool to hear. The one oldie but goodie surprise at the end was “Blood Brothers” from Brave New World, which is a great track that doesn’t get its just due! 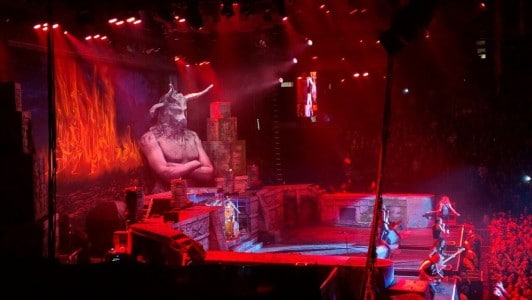 In terms of the band members themselves, it felt like time stood still for bassist Steve Harris who looked pretty much the same as 30 years ago despite the passage of time and still seemingly singing all of Dickinson‘s lyrics throughout the entire show. The triple threat guitar assault of Dave Murray, Adrian Smith and Janick Gers was impressive as always with each of them getting a bit of a breather during certain songs since the pre-Brave New World songs were written with two guitarists in mind but now the work was shared among three guitarists. I really could not see drummer Nikko McBrain for most of the night but he certainly was impressive throwing some of his drum sticks way up high for people in higher seated areas to be able to catch them. The star of the show though was singer Bruce Dickinson who showed no signs of any lingering issues from his tongue cancer issues from a while back. Dickinson was also entertaining while showing an interest with what is going on in the world with some of his stories to introduce certain songs. For instance, prior to “Blood Brothers”, he explained that Iron Maiden had just played in El Salvador which was in a sad state due to two major gangs trying to kill each other off leaving many casualties along the way. Dickinson went on to state that Iron Maiden do not care where you’re from and bring people together, or something like that, since apparently no one was killed during Maiden‘s stay in El Salvador. 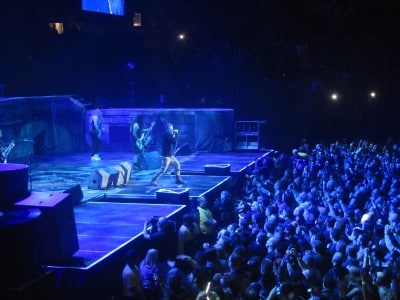 Iron Maiden closed off their strong set with their sing along classic “Wasted Years” from 1986’s Somewhere In Time, which was voted as the Iron Maiden album that has stayed the most with Sleaze Roxx readers over the years (along with Live After Death). Overall, Iron Maiden put on a fantastic performance and I really respect that they are able to play so many new songs from their latest album yet continue to grow their audience and certainly a lot more than back in 2000. While many heavy metal bands continue to rest on their laurels from their ’80s past, Iron Maiden are one of the few that continue to make relevant music that they are not afraid to play more than 35 years after first forming. It was therefore no surprise when Dickinson advised that The Book Of Souls had reached gold status in Canada and was “this close” to being certified platinum. I truly hope that Iron Maiden have at least one more studio album in them and will release a live album based on their The Book Of Souls tour. Up the irons!