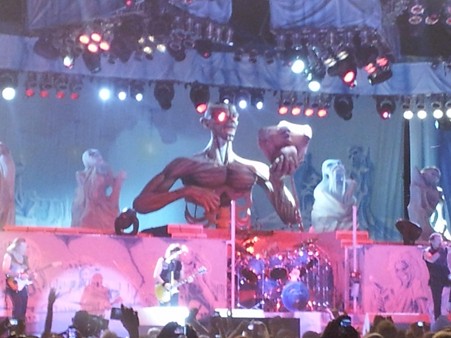 What makes Iron Maiden one of the most unique metal bands is the breadth and reach they have when it comes to their audience. In the last week, I have discovered that two clean cut ‘executives’, an engineer and a lawyer, are big Iron Maiden fans and both attended Maiden‘s latest retro tour through Canada celebrating their Seventh Son Of A Seventh Son tour/CD.

This is why Iron Maiden has, for the last decade, been able to do what most other metal bands have not been able to do — actually expand their audience as time goes on. As an example, when I saw Iron Maiden in Toronto for their ‘Brave New World’ tour in 2000, there might have been about 4,000 people in the audience. Fast forward to 2012, and Iron Maiden had over 15,000 people attend the, most likely sold out, July 13 show in Toronto. You may wonder why I am talking about Toronto rather than Ottawa, but that is where the adventure starts. I had tickets to go see Iron Maiden with Alice Cooper opening at their Friday, July 13 show in Toronto but happened to be in Ottawa the weekend before. Usually bands that have Toronto and Ottawa on their itinerary play these cities a few days apart so I was very surprised to learn on the day of the Ottawa concert from a clean cut engineer that Iron Maiden and Alice Cooper were playing the not so aptly named, Ottawa Bluesfest, on Saturday, July 7.

The nice thing about the Ottawa Bluesfest is its old school rock ‘n roll feel. The show is held at a big outdoor venue (Le Breton Park) and most of the audience is in the ‘general admission’ section. In other words, most of the audience is standing, body to body in sweltering heat, while various mosh pits and crowd surfing takes place. The chances of getting tickets and a good spot to see the show on the day of the concert were therefore excellent since I had heard that the location for the Ottawa Bluesfest could easily handle over 25,000 people.

Accompanied by a first time metal concert attendee, I set foot on the dusty grounds and we were able to get within perhaps 20 rows of the stage despite only arriving about 15 minutes before Alice Cooper was set to hit the stage. What a treat to have Alice Cooper and Iron Maiden on the same bill. Alice Cooper could have likely headlined an Ottawa Bluesfest show by himself. 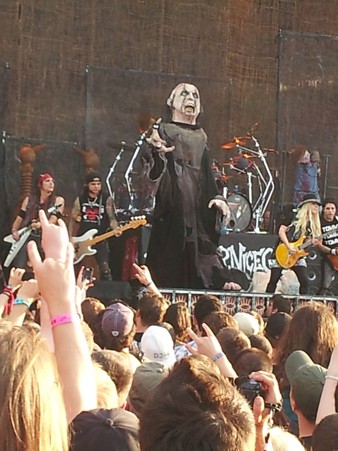 Opening with the classic “Black Widow”, Alice put on an awesome display of fine rock ‘n roll tunes while displaying some entertaining visuals on each song. Although Alice Cooper‘s back song catalog is extensive and some of his bigger hits were notably absent (for example, “Under my Wheels”) from his opening set, the crowd did not seem to mind when he played relatively newer tunes (from after his comeback in 1986) such as “Brutal Planet”, “Feed My Frankenstein”, “Hey Stoopid”, “Poison” and “Wicked Young Man”. Most of the expected classics were also played such as “I’m Eighteen”, “No More Mr. Nice Guy”, “Billion Dollar Babies” and the timeless show closer “School’s Out”, which was extra special with snippets of Pink Floyd‘s “Another Brick In The Wall” included during the song. Alice Cooper has always had amazing back up bands and this time was no exception with three guitarists, including a young attractive blonde female guitarist who seemed to be playing most of the solos. The bassist even sang “I Love The Dead” while Alice presumably took a little break. All in all, Alice put on an amazing show and this was just the opening band!

Unfortunately, there was about an hour wait between Alice Cooper and Iron Maiden‘s sets. By the time we got refreshments, I started debating with my first time metal concert attendee when we should make our way back into the audience since I knew that the crowd would tighten up and it would become harder and harder to make our way through the crowd the closer we got to Iron Maiden‘s start time of 9 pm. I should have insisted that we move back into the crowd a lot sooner because by the time that we started making our way closer to the stage, it became more and more difficult and we ended up further back than we were to see Alice Cooper. We could have of course just pushed our way through the crowd as some people like to do, or simply act drunk like some people do to have the crowd disperse, but we elected to remain fairly civilized in our quest to get closer to the stage. 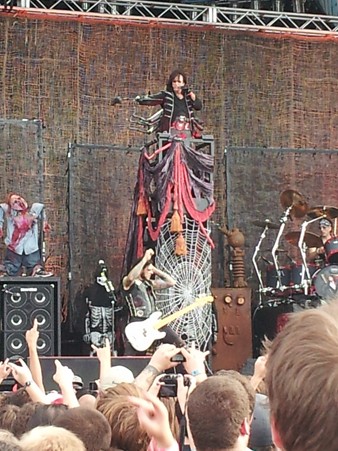 Little hints of Iron Maiden‘s stage show could be seen prior to the curtains dropping — light blue icicles could be seen over most of the lights above. By the time Iron Maiden kicked off their show with “Moonchild”, the crowd was treated to a cool light blue icicle stage and backdrop which brought back flashbacks to Iron Maiden‘s 1988 tour in support of their ‘Seventh Son of a Seventh Son’ CD. By the time, Iron Maiden started their second song, “Can I Play With Madness”, you could tell that a large amount of people in the audience were long time Maiden fans singing every word to every song. All of Iron Maiden‘s greatest hits were played but for me the best songs were the ones that are usually not played these days such as “The Prisoner”, “Afraid To Shoot Strangers” and “Phantom Of The Opera”.

While some people may criticize Iron Maiden for doing these retro tours, the reality is that the band strikes a fine balance between what it plays from tour to tour. For example, in support of their ‘Matter Of Life And Death Tour’ in 2006-07, Iron Maiden played that whole new CD live and ended the show with only five older classics. In any case, it seems that the greatest response that Iron Maiden gets is when they do play these retro sets. That being said, the crowd in Ottawa seemed relatively quiet compared to other crowds (for example, about a week later in Toronto the atmosphere was absolutely electric). Lead vocalist Bruce Dickinson was always urging the crowd to be louder when he belted out his classic “Scream for me… Ottawa”. Perhaps having to stand for about four hours in sweltering heat made the Ottawa crowd a little more tired than usual.

As expected, mascot Eddie came out during one of the songs, this time during “The Trooper” decked out in full combat gear (from the old days). In addition, as expected, the light show was spectacular — the back drops kept changing with different giant pictures of Eddie customized to the song that was being played, and all the pyros, fire (especially during “The Number Of The Beast”), and everything else that you would expect was displayed. Surprisingly, Dickinson ended up apologizing to the fans given that, apparently, the Ottawa Bluesfest stage was a little too small to accommodate Iron Maiden‘s show so some of the props that Iron Maiden would have usually displayed or used did not make it its way for the Ottawa gig. I think that most people in the audience would have never known/noticed had Dickinson not alerted the audience to that fact.

Perhaps the only downsides to the evening was having to deal with the mosh pit that unfortunately came close to where I was standing and seeing some crowd surfing people fall on their necks/heads when portions of the crowd would all of a sudden disperse. That has got to hurt! The joys and pleasures of a large general audience crowd…

The main set closed off with the sing-a-long classic “Fear Of The Dark” (which always gives me goose bumps) and the obligatory show closer “Iron Maiden”. Iron Maiden returned for three encores following the classic “Churchill’s Speech” that had old time war scenes playing in black and white on the big screens at the side of the stage. “Aces High” really seemed to get the crowd going. The second encore “The Evil That Men Do” has never been a big favorite of mine but kept the crowd’s energy going. Iron Maiden closed off its show with its timeless classic “Runnin’ Free”.

What a great evening, and I am glad that I was able to experience it all over again six days later in Toronto!