On a cold night in early March, Jackyl made their triumphant return to Central Pennsylvania to play to a packed house at Club XL Live in Harrisburg. Despite the snowy conditions on the night of the show, their faithful fans showed up in droves to stake out a place in line for what frontman Jesse James Dupree would call a “family reunion.” If this was the case, it was more of an “extended family” gathering, as hundreds of fans showed up to welcome the Georgia band back to Pennsylvania. 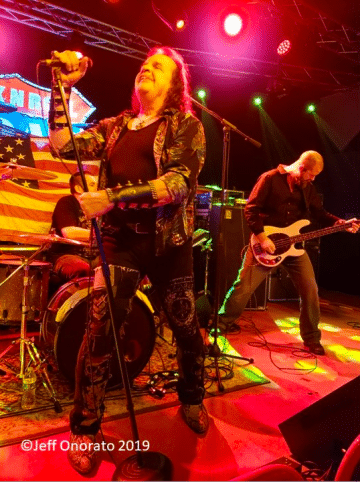 The evening’s festivities were kicked off by two local area bands, Road Case and Adrian Blitzer, respectively. Both excellent bands in their own right, playing faithful renditions of various rock/metal hits from the past few decades. Road Case kicked off the evening with a set of classic rock covers spanning the late seventies, eighties and early nineties. They played great versions of “Hard To Handle” by the Black Crowes, The Cult’s “Love Removal Machine”, Rhino Bucket’s “One More Night Stand”, “It’s So Easy” by Guns N’ Roses and Aerosmith’s classic “Mama Kin” among others. The band played with a true passion for their art and had great enthusiasm for the music. I thought Road Case were the perfect choice to open up a Jackyl show, and those in attendance seemed to agree. The crowd was really into their set and clamored for more.

Area favorites Adrian Blitzer followed Road Case with a blistering assault of hits originally performed by various nu metal acts of the nineties. They kicked off their performance with an energized cover of “Bawitdaba” (Kid Rock) which immediately commanded the crowd’s attention. They pulled off a great rendition of Rage Against the Machine’s “Bulls On Parade.” Tom Morello’s guitar parts in the original version of the song are very distinct, however Adrian Blitzer’s guitarist did a commendable job of replicating the scratching effects used in the solo. Other songs in their set included Saliva’s “Ladies & Gentlemen”, “Stupify” by Disturbed, Linkin Park’s “In The End”, and Limp Bizkit’s “Break Stuff.” They finished up their set with a crowd favorite — Drowning Pool’s “Bodies.” While these songs may have been slightly misaligned with Jackyl’s repertoire, Adrian Blitzer brought a tremendous amount of energy and fun to the stage nonetheless. 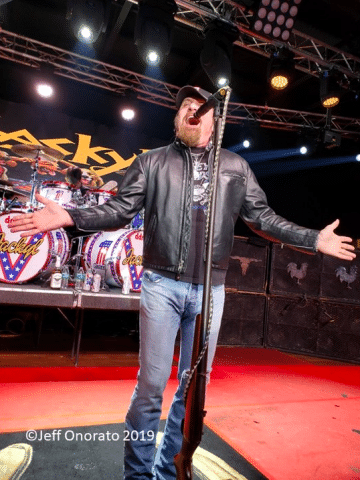 Jackyl then hit the stage with a full-on rampage that hit the crowd like a locomotive. “Blast Off”, from ROWYCO, kicked their show off in a high-octane fashion that continued with “My Moonshine Kicks Your Cocaine’s Ass.” Both songs were exhilarating and demonstrated why the band remain a fan favorite after all these years. The band was super tight and played with great intensity. The rhythm section of drummer Chris Worley and bassist Roman Glick was thunderous and never missed a beat as they flawlessly continued to pummel the crowd with “Mental Masturbation” from Night of The Living Dead and “Encore” from Best In Show.

The band then slowed things down for a moment while Jesse James Dupree jokingly schooled the attentive crowd on the unimportance of “fixing things that are bound to get broken again” before segueing into “Screwdriver” from Best In Show. Jackyl’s audience seemed to love the crowd interaction and shtick in between songs. Strapping on a Les Paul to assist on rhythm guitar, Jesse and the boys then harkened back to their eponymous debut for the next song of the evening. Much to the crowd’s delight, “Down On Me” was immediately recognized as the next song as soon as those first few notes trickled out. It was a lot of fun to hear them play songs from their debut album. They would be the first of many from their self-titled release.

Push Comes To Shove would be represented twice during the show. The first visit being the title track, which went over great and continued the high-energy pace of the performance. This was possibly my favorite song of their performance that night. After the wallop of “Push Comes To Shove”, Jesse performed a solo version of the Hank Williams Jr. classic “Whiskey Bent and Hell 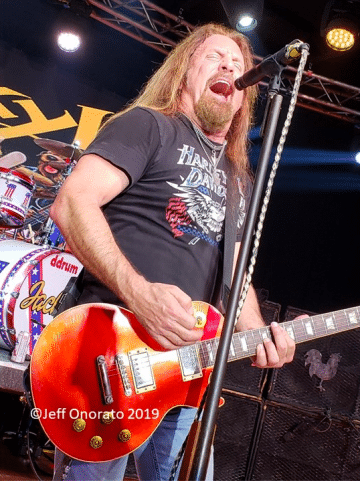 Bound” which transitioned nicely into “Just Because I’m Drunk” from ROWYCO. To the band’s credit, they do give a fair amount of attention to their newer albums rather than sticking to the hits off of their first few releases. Their up-tempo newer material goes over very well in a live setting. I would like to see them change up their set a bit in the future and include something from the unrepresented Cut The Crap album. “Locked & Loaded” would be a great addition to their show.

The second showing from their Push Comes To Shove disc came next, in the form of another ballad — “Secret of the Bottle.” That would be the final slowdown of the show though. From there on out, a barrage of classics from their first album would keep the crowd swaying right up through the end of the set — “I Stand Alone”, “When Will It Rain”, “Dirty Little Mind”, “Redneck Punk” and “She Loves My Cock” were dropped out in succession and the crowd loved every moment of it.

The band then welcomed a young lady onto the stage that was celebrating her birthday. I thought she would get a piece of cake in the face for sure, but no. After that, a revving of the infamous chainsaw let everyone in the club know that it was “time for the blues” as Jesse put it. A member of their road crew then carried out a wooden barstool and the Stihl for Jackyl’s crowd pleasing encore “The Lumberjack”, their biggest commercial success to date. True to form, Jesse James laid waste to the wooden barstool with just a few slices and then smashed it to pieces in their finale. 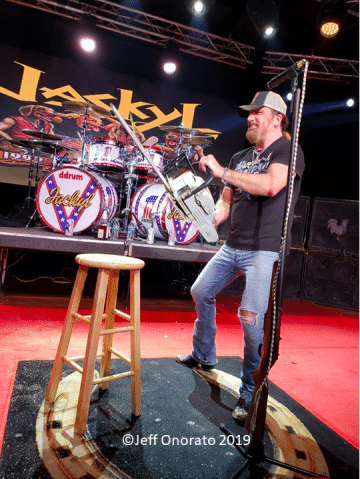 Jackyl will be playing scattered dates throughout March, April and May. Visit their website for a complete list of upcoming shows. Don’t miss them!