JACKYL CREATE MEMORIES OF A LIFETIME 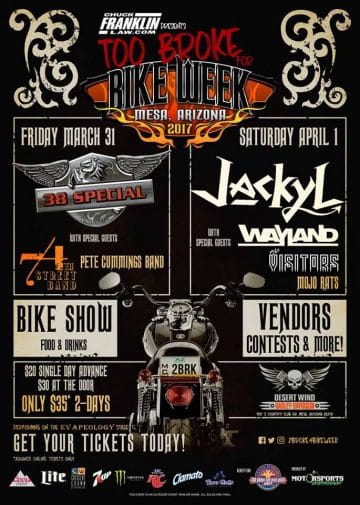 What a show it was as Jackyl headlined last night at the Desert Wind Harley-Davidson in lovely Mesa, Arizona. The pre-Arizona Bike Week event, really a kickoff of the week, saw the veteran Southern sleaze rockers take the stage to a crowd ranging from Valley talking teens to Vietnam veterans on a night that was made for outdoor fun. The weather was perfect and there was excitement in the air not only for Bike Week but also for the finals of March Madness.

We arrived at the show at about 7 pm. We walked in as the opening act, a band called Wayland, was performing. I must admit, I had not heard anything by this band before but immediately was impressed by the musicianship and vocals. So often in modern music, especially with newer bands, I either like the vocalist but the band leaves something to be desired or, as is more commonly the case, the band sounds great but the singer can’t sing a lick. In this case, the singer could sing and the band rocked too. It would be tough to describe Wayland as they were clearly a hard rock act but they also had a little pop rock to style and maybe a touch, though not a lot, of country. The lead singer is named Mitch Arnold. When going for it, he could be compared to Quiet Riot‘s late frontman Kevin DuBrow and all the way to the other end, like the vocalist of Hanson… not Kelly Hansen the Los Angeles vocal jukebox currently singing for Foreigner but the grown up version of the kid band that sang that 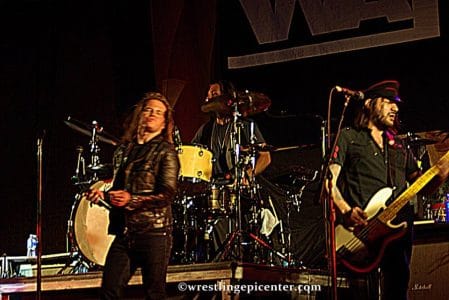 silly song “Mm Bop.” But, I’m off on a tangent. Bottom line? My 15 year old son loved their performance and bought some merchandise of theirs. We, my wife and I, liked what we were hearing also and bought the CD although the CD doesn’t seem to pack the same punch as their live show.

Wayland‘s drummer, however, was familiar to the Jackyl family. Because, well, he is Jackyl‘s family! Jesse James Dupree‘s son Nigel Thomas is Wayland‘s drummer, which would both explain why they were opening but also would explain their influences and sound. It is good stuff and worth checking out. If you like what you hear, buy some music and support them!

But, it was time for the main event. 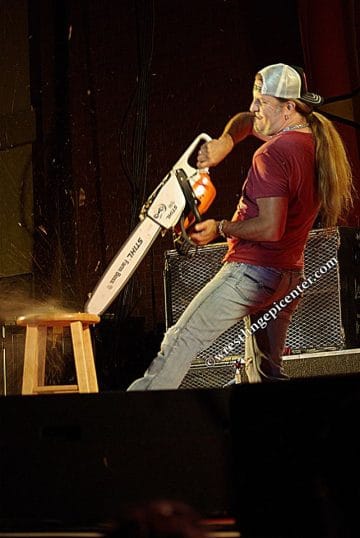 Jackyl took the stage to the start of “Redneck Punk” which they have done since the live album of nearly 20 years ago. The crowd went nuts on the second song, “My Moonshine Kicks Your Cocaine’s Ass” and with that, Jesse seemed to have the audience ready to go. I will say I was a tad surprised at the amount of newer era Jackyl songs they used early in their set including “Rally,” “Screwdriver” and “Encore.” Not that it is a bad thing, but you just typically expect a lot of bands with a large catalog to draw heavily from the classics instead of the new stuff. It actually was refreshing having it go the other way.

It should be noted that Jesse‘s son, the drummer from Wayland, joined his dad on stage playing guitar on “I Stand Alone” and others. It was a family affair!

As time went on, the band hit hard with hit after hit including “Down On Me,” “Push Comes To Shove” and “When Will It Rain.” After a country block featuring “Just Because I’m Drunk (Don’t Mean You’re Right)” and “Secret Of The Bottle,” the band went back to the hits including “I Stand Alone” and “Dirty Little Mind.” The encores featured Jesse calling out the owner of Rocklahoma who was on hand at the event. Jesse advised the Rocklahoma owners’ son bought their debut album when he was a 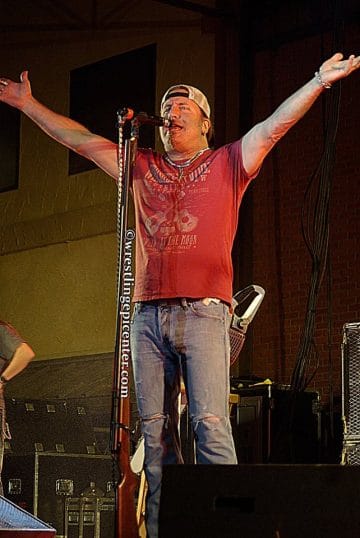 teenager and his dad kept breaking the record because of their next song, “She Loves My Cock.” After “She Loves My Cock” came the closer “The Lumberjack” — chainsaw and all. There was a burnt and destroyed stool involved in the finale as well as which has become the norm.

All in all, it was a great show with some incredibly funny commentary from Jesse throughout. The songs were a solid mixture of the hits and the later era Jackyl stuff though not much, if anything, from Cut The Crap or Relentless made the set list. That is a bit of a shame as both are strong records and Relentless is actually one of my favorites.

After the show, Jackyl did a meet and greet. At the meet and greet, Jesse teased my seven year old challenging him to a wrestling match and drawing, with the other side of the marker, on his face. My son loved that. Guitarist Jeff Worley teased my son that it was time for him to go to bed as well. It was the perfect way to end an amazing night. In 2009, when my oldest was just a little older than my youngest is now, Don Dokken called out to my son in the crowd and was awesome to him. It stuck with my son and made him a fan for life. I am certain what Jackyl did here will do the very same for my youngest.