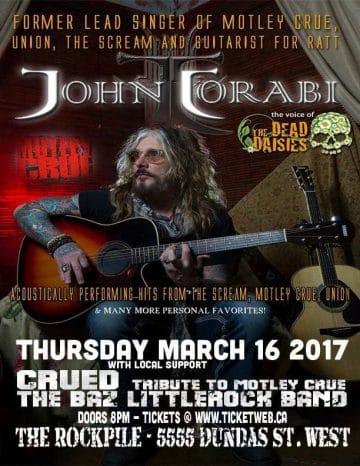 For those who are unfamiliar with Baz Littlerock, he has doubled as the singer, for the past 15 years in the Bon Jovi tribute act, Bon Jovi Forever. This is not an easy task. There are those who can pull this off, and those who fail miserably. In the case of Baz Littlerock, he is the most dead on Bon Jovi vocalist out there. I will even go out on a limb and say that Littlerock sounds more like Jon Bon Jovi these days, then Bon Jovi himself. For fans of Bon Jovi, Bon Jovi Forever is a must see. There are other Bon Jovi tribute acts in Southern Ontario, but they lack that one key ingredient — a singer who sounds exact.

With all this said, Littlerock was not out performing as Jon Bon Jovi on this particular evening. Littlerock and his band were at The Rockpile to prep the crowd up for John Corabi. Littlerock and co. did a nice job of mixing covers with original material. The band started their set off with a kick ass cover of Van Halen’s “Jump.” Keyboardist John E. Keys was spot on with his duplication of Eddie Van Halen’s classic keyboard line. Littlerock’s set was powerful and possessed the energy of a great opener. Bassist Darryl “The Rock N’ Roll Kid” Coleman and drummer Kevin “Keggy” Kunkel fit nicely in the pocket as the band performed two originals. “Live It Up” and “Me And My Guitar” went over very well with the crowd. Next up, the keyboard work of Keys was on display once again as the band did a great version of the Guns N’ Roses epic classic, “November Rain.” Littlerock played the guitar solos with the same feeling that the great Slash would and I am positive that Slash himself would be impressed.

Littlerock switched gears again and did a nice cover of Sweeney Todd’s classic “Roxy Roller.” From there, it was back to the originals. They performed the last two of the four the band would do on this night. “Perfect Crime” and “To Lean On” were catchy tunes that still kept the audience’s attention. Littlerock then asked the audience if they had seen the movie Rockstar. It was at this point that Coleman broke into the bass intro to “We All Die Young.” To keep the performance moving, it was only natural that Littlerock do something by the band that he has made a living emulating for the past 15 years. Littlerock introduced the song by stating that ¾ of this band are members of Bon Jovi Forever. They quickly broke into “It’s My Life.” The band ended this stellar performance by doing Journey‘s “Separate Ways.” A nice end to a great performance and exactly what you come to expect from the opener.

As John Corabi entered the stage, the crowd quickly erupted. The presence of this man was felt immediately, wearing cool glasses, t-shirt, vest, scarf and sporting a very long, but neat beard. Corabi introduced himself and mentioned his son Ian would be playing along with him on percussion this evening. Corabi seemed to be in very good spirits as he joked about his son being “his bitch” on this particular tour and that his goal was to send young Ian Corabi to therapy by the end of the tour. 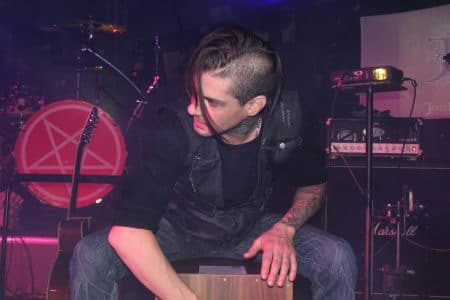 Corabi then slammed into “Love (I Don’t Need It Anymore)” from the first Union record. It was very well done and I couldn’t help but sing along. Corabi then spoke about his acoustic solo album that came out a couple years prior. From this album he performed “If I Never Get To Say Goodbye” with exuberance and feeling. Being that this was an acoustic show, Corabi did a great job of engaging his audience. He mentioned his love for the late great David Bowie and he would perform something off the Ziggy Stardust album, but not the one you’re expecting. It was a song I was not familiar with, but I thoroughly enjoyed Corabi’s distinct voice covering a truly amazing artist. “Lady Stardust” was played as if Corabi had written it himself. It was at this time that Corabi performed a song from his latest project, The Dead Daisies. As Corabi was ready to perform “Something I Said” from The Dead Daisies’ Revolucion album, Corabi stated that there is talk of The Dead Daisies possibly performing in Toronto in August of this year. The crowd at the Rockpile cheered wildly at the mention of such an event.

John Corabi playing acoustic cover version of The Dead Daisies‘ “Something I Said” in Toronto, Ontario, Canada on March 16, 2017:

“Mother, Father, Son” from The Scream’s masterpiece Let It Scream was up next. It was great to hear Corabi perform old and new material spanning his 25 year career. This song gave me the same feeling that it had back in 1993 when I purchased the album. This song’s lyrical content has always appealed to me. As I stated Corabi was very open with the audience. Corabi went 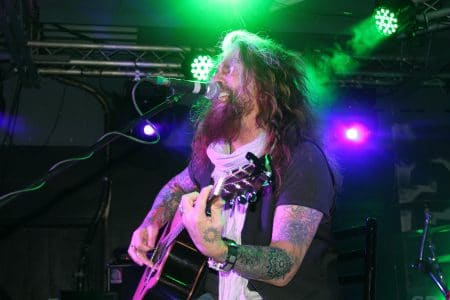 into this very cool story about The Dead Daisies being in Europe last summer. The band was to perform in Paris a week after the terrorist attacks took place. The Dead Daisies were apprehensive about doing the show, but charged on and made the decision that the show must go on. It was at this show that Corabi met a fan that wanted to thank the band for playing the show regardless of the turn of events. The fan stated that the band were his heroes. The fan then proceeded to tell Corabi that he had been one of the hostages. Corabi was taken back by this and told the fan that “we’re not heroes, you’re the hero.” The way Corabi told this story was very heart felt and with much emotion. Corabi said for the rest of his life, he will never forget that meeting with this fan. “When You And I” was then announced and Corabi did a great rendition of this great song from the Revolucion album.

It would not be a Corabi show without the man touching on his Mötley Crüe material. Just before performing “Misunderstood,” Corabi went on to say that the long awaited Corabi/Mötley 94 live album from his 2014 tour would see the light of the day this year. Not to mention a new The Dead Daisies live album. So expect two live albums in 2017. “Misunderstood” sounded fantastic as Corabi picked every note precisely on his 12 String Acoustic guitar. Keeping up in true fashion to the classic Mötley album, Corabi went straight into “Loveshine.” The crowd sang along to both these classic songs. For many, this album is believed to be the best Mötley Crüe album ever.

“Everything’s Alright” from Union’s Blue Room album would be Corabi’s next song. Corabi had asked the audience what they wanted to hear and someone shouted this song out. It sounded just as good acoustically as it does with the full band on the original album. From there it was back to the Mötley 94. Corabi played the opening notes to “Driftaway” and the crowd was 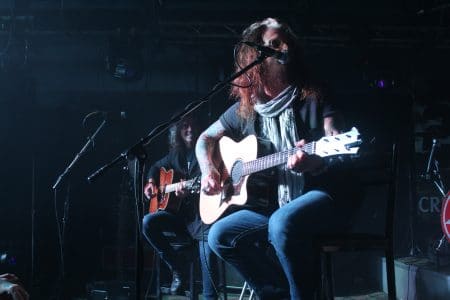 focusing on his every move by this point in the performance. For Corabi’s next composition, he would play one that I love, but I couldn’t understand why he would give up one of his own songs to perform this one. It would be “Home Sweet Home” — a Mötley Crüe classic from long before he joined the band. Don’t get me wrong, it was a great rendition of the song and he had the crowd singing along to it, but it’s just not a song I associate John Corabi with.

It was at this point in the show, Corabi would bring up a special guest from the audience. Guitarist Gerry Finn of the Killer Dwarfs. Finn immediately plugged in his guitar and they proceeded to play the Beatles classic’s “Oh Darling” which Union released on the reissue of their self-titled debut album. It was great to hear Corabi sing this song. This was one that I always felt Corabi did a tremendous job on. As Corabi and Finn conversed, they established they would perform the Rod Stewart classic “Maggie May.” Corabi had done this song on a tribute album a number of years back. Corabi stated to the audience, “Hold on, gotta see if I remember this.” It was quickly decided he remembered it. Finn did a great job emulating the licks that were originally done on the song. By the expressions on his face, you could tell he was doing his best to remember the original guitar lines. Whether they were exact didn’t matter, Finn did a fantastic job.

With the show quickly coming to an end, Corabi and Finn started into the Mötley classic “Hooligan’s Holiday.” It’s funny, this song for being so heavy on album, really comes across great in an acoustic setting. The last song of the night, although never a big hit in Top 40 terms, is one that to Corabi fans is a classic. “Man In The Moon” by The Scream closed things out perfectly. In all, I thoroughly enjoyed this performance. Corabi is really a great songwriter and performer. His personality shows in his music and he engages the audience so well with his seriousness and humour, which were all used at the appropriate times throughout the show. This is third time I have seen Corabi perform acoustically and he never disappoints. I look forward to the next show with Corabi, be it The Dead Daisies or solo. 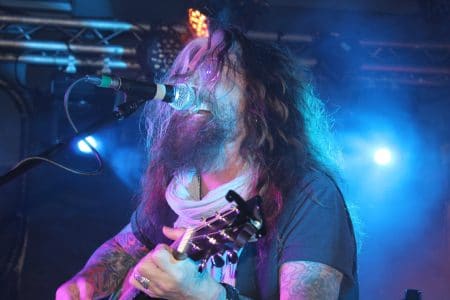 Crued was the last band of the evening. It was very to cool to see their stage set up lurking behind. The double bass drum kit with the Shout At The Devil pentagram stood out and created anticipation for the crowd. Being that I am a huge Mötley  fan and have been since I was 10 years old, I am always curious to see how this band would come across.

Crued came out in true rock n roll fashion. Decked to the nines in their Mötley stage gear. The confusing part for me was this. The Nikki Sixx character was dressed in the long beige leather coat that Sixx wore on the 1994 album. The Tommy Lee character was dressed as the modern day Tommy Lee. The Mick Mars resembled the Mars of the Dr. Feelgood era. As for the Vince Neil character, he was a little more confusing because he had long red hair, in more of an Axl Rose way and he wore leather that was somewhat Too Fast For Love era, but not quite. Mötley Crüe were always a band that you knew what era they were from because of their stage wear. They changed and evolved as each album came out. With that said, the band itself was very tight and sounded dead on.

The Nikki Sixx lookalike was also wearing sunglasses and really looked like Nikki Sixx. He had all of Sixx‘s cool moves down. As for the others, they looked good and believable with the exception of the singer. He did his best, but didn’t remind me of Vince Neil. His vocals were decent though and sounded close to that of Vince Neil. To be honest, it was such a strange element that night. Live heavy band, then acoustic artist and then an over the top, very loud band. So in terms of adjusting your ears, it was a little hard and not the ideal situation.

All and all, Crued were decent and did a good job of imitating Mötley Crüe. For me as a big Mötley fan, I feel that some bands are just harder to duplicate. Mötley is one of them. So my hats off to Crued for their stage set up, costumes and overall sound.