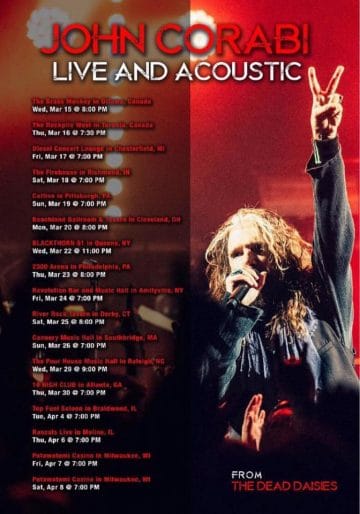 Traveling four hours to see John Corabi play one of his acoustic shows was a small price to pay. This would be my sixth time seeing his acoustic show and I was just as excited this time as I was for those before. Since March, John has been playing a short string of acoustic dates that took him from Canada, down the east coast and will end in the mid-west before he begins touring overseas with The Dead Daisies.

This would be a hometown show for John and his opener, Heaven’s Edge singer Mark Evans, would share that honor with him as he, too, is a Philadelphia native. Mark played an enjoyable set of song’s he’d written and even let us in on the stories behind a couple of them. One, in particular, was the song ‘Jacky’. He said the song was about a guy friend of his and not long ago he was talking to the friend and told him the song was written about him. The song references him being a womanizer. The friend seemed offended and said, “What do you mean? I’m married. I’ve been a faithful husband for five years” to which Mark replied, “Yeah, but you’ve been married for 12.” Mark’s voice sounded great and while I had only heard a couple of 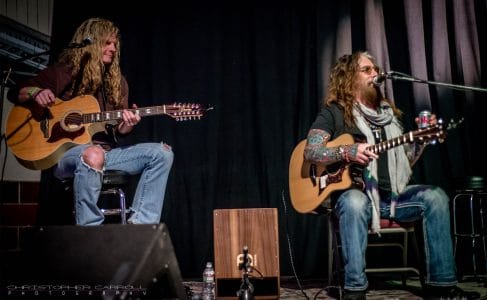 Heaven’s Edge songs, I found myself sitting back, enjoying his playing and singing. He’s definitely a talent and if you ever have the chance to see him, you won’t be disappointed.

When John Corabi took the stage, it was like he’d walked into our living room. We were all excited and he was thankful for the invitation. He went about playing his acoustic guitar with a rhythmic flair and confidence that was simply relaxing. He sings with such conviction and plays with such ease that the audience completely buys in. There is no “Is he going to be able to hit this note?” or “Can he play this guitar lick?” He is so far beyond having to be measured that we all just sat back in our chairs and were 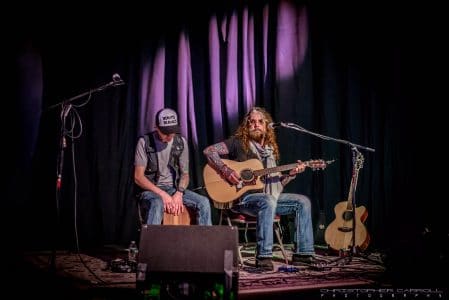 able to truly enjoy the ride on which he took us. You’ve heard of “comfort food.” In his acoustic shows, John Corabi plays comfort music. It makes you smile and anxious for the next course. It makes you happy and full, and then you want more.

John’s son, Ian Corabi (who also plays in John’s solo band) was there for this show. He isn’t at all of the shows for this tour and this is the first time I’ve seen him at one of the acoustic gigs. He played the Cajone and fit in perfectly and took his father’s onstage ribbing like a man. It’s nice that Ian is given the opportunity to join in at some of these shows. He’s quite an accomplished drummer.

John played songs from The Scream, Union, Mötley Crüe, The Dead Daisies and even tossed in some old Rod Stewart and David Bowie. Since he was taking requests, we got him to play an 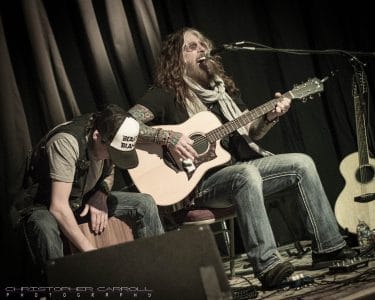 amazing version of KISS’ “Hard Luck Woman” which Paul Stanley originally wrote hoping that Rod Stewart would record the song. Someone shouted out something about Bobby Blotzer. He didn’t play any songs from that period, but he acknowledged his short stint in Ratt, as a guitarist, and then the fact that he was in a band Twenty 4 Seven) for a short time, with Ratt drummer Bobby Blotzer. He described the experience as “someone reaching up through your ass to give you a root canal!” This man does have the gift of gab. He tells you stories like about the conversation he had when he was recording in the same studio as Steven Tyler or when his model girlfriend broke up with him as soon as she found out he was kicked out of Mötley Crüe. He told us about the autographed Rod Stewart soccer ball that he recently caught at a Rod Stewart concert.

I’m telling you, you could sit and listen to John Corabi play, sing and tell stories for days. The stories are so interesting and he tells them so well that, as soon as he finishes one, you just want to hear another! And he will tell you another….. the next time you see him.