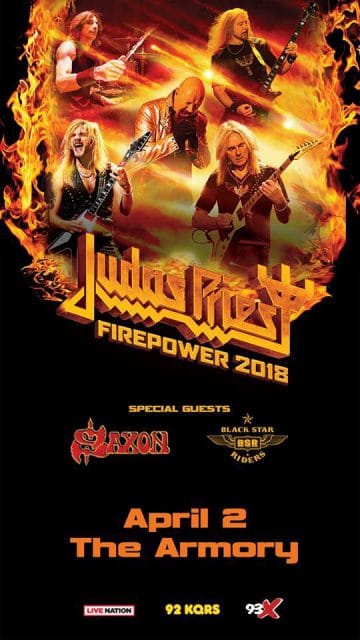 On April 2nd, British metal band, Judas Priest invaded Minneapolis, Minnesota. Even though they could have handled this musical assault by themselves, they brought along back up. Fellow Brits Saxon, as well as the Black Star Riders rounded out the musical onslaught on this old brick building called The Armory.

The Armory first opened its doors as a modern music venue on December 31st, 2017. Before hosting concerts during Super Bowl LII, a couple big name musicians have been within its walls before. In 1982, Prince shot his music video for “1999” here and sixteen years later, Aerosmith found themselves here for their video for “Don’t Want To Miss A Thing.” It was originally built in 1935 for the Minnesota National Guard and was also once home to the Minneapolis Lakers before they moved to Los Angeles. It also held some boxing and even some concerts back in the day. Knowing this, I was a little worried about how modern live bands were going to sound in an old brick building of this age. I would soon find out.

I headed out early since this was my first time to this venue and I wanted to get a close parking spot and find will call to get my press pass. I found it with ease and parked in the garage below the venue. I went up a flight of steps and there was will call. This was too easy. I guess there was really no point in leaving early, but I got to check the place out before the crowd stormed in. I noticed the post war architecture right away with a little Art Deco. This gave the venue a really cool look. The main floor was all general admission with raised levels on each side which housed the bars and restrooms. The two upper levels were reserved and VIP seating with what looked like comfortable, upscale chairs and sofas.

First up on the night was Black Star Riders. This band is comprised of the most recent members of Thin Lizzy. They decided to change their name when they wanted to record new music. They are fronted by singer/guitarist Ricky Warwick along with 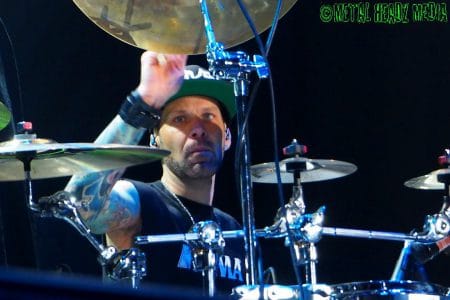 Songs off of their latest album, All Hell Breaks Loose, including the title track, bookended their setlist. “Jailbreak” from the Thin Lizzy years fit right in with the new music. Even though they changed their name, they still have a bit of the old sound with a heavier edge to it. The rest of their set was comprised of songs off of their first two albums, with my favorites being “When The Night Comes In” and the closing song “Bound For Glory.” The band sounded tight and I was surprised at how well the old building was handling it. Was the sound great? No, but what do you expect from a building that once was home to tanks, jeeps and soldiers. It could definitely use some more sound dampening, but I’ve heard far worse.

Black Star Riders live at The Armory in Minneapolis, MN on April 2nd, 2018. 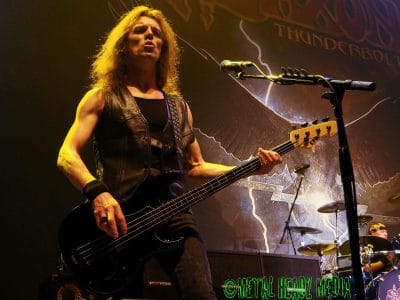 Carter. Filling out the rest of the band was Doug Scarratt on guitar and Nigel Glockler on drums, who has been in and out of the band since 1981. They mixed in three more tracks from this album along with a great mix of their classics during their twelve song set. These included “Power And Glory,” “Motorcycle Man” and my all time favorite, “Wheels Of Steel.”

As long as Saxon has been around, they surely didn’t show any signs of calling it quits quite yet. Biff‘s vocals were as strong as ever belting out many of my favorites with ease. Nibbs was an animal on stage, thrashing his long hair around like a teenager at a Metallica concert. Their sound quality was up there with the best of them and could hold their own with the likes of Iron Maiden, Mötorhead and the mighty Judas Priest. They wrapped up their set with Biff on the microphone speaking to the crowd, “We have time for one more. Do you want something new or old?” The crowd responded with a resounding response. “OLD”! They proceded to tear into “Never Surrender” for what I thought was going to end the night, but they had an ace up their sleeve and snuck in one last oldie, “Heavy Metal Thunder.”

Saxon playing “Princess Of The Night” live at The Armory in Minneapolis, Minnesota, USA on April 2, 2018:

Saxon – Princess of the Night (The Armory, Minneapolis, MN 2018) 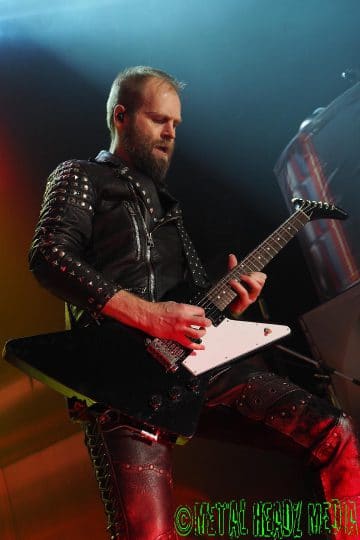 Standing in front of the stage waiting for Judas Priest to begin, I thought back to the first time I saw them live in 1988 in support of their Ram It Down album. Seeing them with their most popular line-up and thinking that on this night, there would be no Glenn Tipton, no K.K. Downing and long gone is drummer Dave Holland. It gets harder and harder to come to terms how fast the “Metal Gods” of our youth are disappearing from our eyes. It’s rare these days to go to a show and see a band with all the original members, so I settled back to see what this incarnation of Judas Priest will bring to the stage.

“Firepower” started off the night before the band took a trip back into time with “Running Wild” and “Grinder.” They were sounding great from the start. Rob Halford took center stage and seemed in control of his vocals. They stuck mainly to their familiar hits along with four off of the newest release, Firepower. Fists were in the air as they rocked through “The Ripper,” “Turbo Lover” and the great cover of Fleetwood Mac‘s “The Green Manalishi (With The Two Pronged Crown).” Along with Rob, long-time bassist Ian Hill took his usual place at the back right of the staged as he swayed with the music. Helping Ian keep the pace was Scott Travis behind the kit. He makes every song look so easy, especially one of my many favorites, “Painkiller.”

Rob kept his vocals strong throughout the night by strategically placing his signature screams. “Painkiller” is the only song I noticed his voice falter with the high demand for his upper vocal range. This definitely did not put a damper on the night. Hats off to any 66 year old 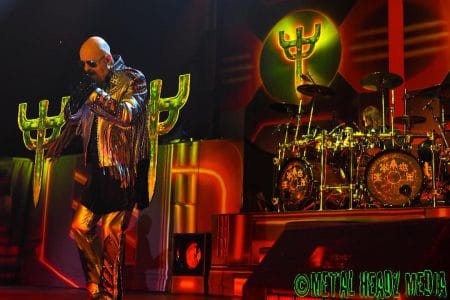 singer that can still do what he does at this stage in his career.

Taking over for K.K. when he retired from the band was Richie Faulkner. He handled most of K.K. and Glenn‘s solos on the night while Glenn‘s replacement, Andy Sneap, played most of the rhythm guitar parts. What seemed like an endless setlist continued with “Some Heads Are Gonna Roll,” “Breaking The Law,” “Hell Bent For Leather” and another favorite of mine, “Metal Gods.” The night was closed out by a couple of their most memorable songs, “You’ve Got Another Thing Comin'” and “Living After Midnight.” Overall, I thought this turned out to be a great show, complete with a blend of new and classic material along with great lighting and stunning videos that blended well with every song. If you get a chance to catch this tour, I highly recommend it!

Judas Priest live at The Armory in Minneapolis, MN on April 2nd, 2018.