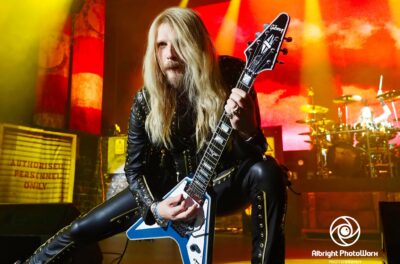 BOTH QUEENSRŸCHE AND JUDAS PRIEST PUT ON AMAZING SHOWS! 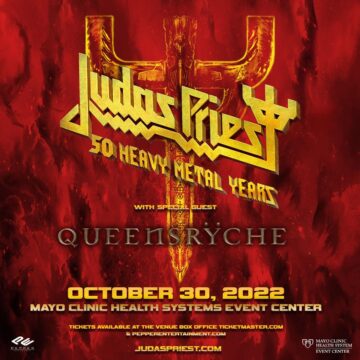 Mankato, Minnesota hosted the 50 Heavy Metal Years Tour on October 30th. Mankato is a mid-sized city south of the Twin Cities and does host a few good concerts from time to time. When I saw Judas Priest was bringing back Queensrÿche for their tour, I knew I had to go. I am ashamed to say this, but this would be my first time seeing the mighty Judas “Fucking” Priest in concert.

Queensrÿche hit the stage at 7:55 pm and kicked off the show with “Queen of The Reich.” The energy of the band and crowd kept the momentum going with “Warning,” with bassist Eddie Jackson a.k.a. Ed Bass providing the back up vocals. Vocalist, Todd La Torre, welcomed the crowd and thanked everyone for showing up on a Sunday night. He asked the crowd if they like the older songs in their catalog and informed us that there is more old shit to come. La Torre then introduced the next song, “En Force,” then jumped into “NM 156.” 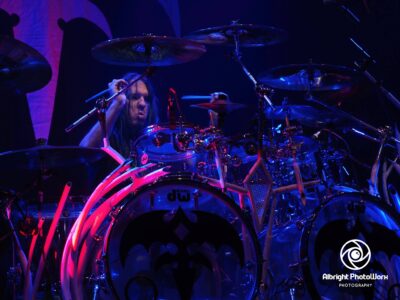 Queensrÿche just released their fourth album with La Torre on vocals, Digital Noise Alliance. This new album is fantastic from beginning to end. They mix all things Queensrÿche in the last 40 years on this album. With the album just being released a few weeks ago, La Torre asked the crowd if they wanted to hear one of the new songs, “Behind the Walls,” which is one of my favorite songs on their new album. And even better — it sounded even better live than on the album. With only having half a stage to work with, Queensrÿche had banners that looked like stained glass windows with depictions of their previous albums on both sides of drummer, Casey Grillo. Queensrÿche also had a great light show that was synced with every song they played. Not only were the lights in sync, but the band was in sync too! Guitarists, Michael Wilton aka Whip, and Mike Stone, the latter having returned to the band fairly recently, sounded amazing with every solo and while harmonizing melodies.

Crowd favorites “Empire” and “Operation Mindcrime” had everyone screaming for more. Queensrÿche gave the crowd another taste of their new album with “In Extremis.” Closing out the night were the hits “Take Hold of The Flame,” “Screaming In 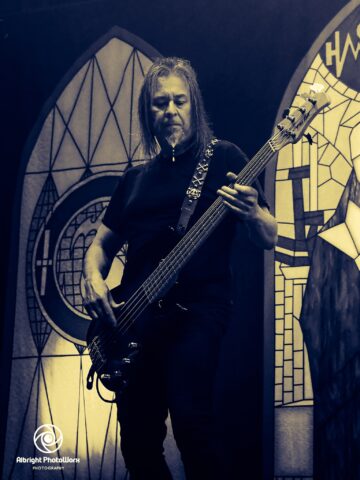 Digital” (which La Torre did an amazing job on), and “Eyes of A Stranger.” Prior to walking off the stage, La Torre told the crowd that “this is the one and only Queensrÿche.”

There is no slowing down for Queensrÿche as I am sure they will be going on a headline tour to promote their new album. I will make sure I am there in hopes of hearing more of their new songs live. 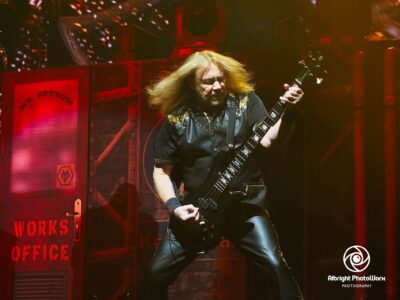 Now it was time to cross another band off my bucket list — Judas Priest. When the lights went out, a voice came over the PA system to get the crowd pumped up. During the intro, a large display of the Priest logo( which was laying horizontal from the stage), started lifting up and was put right above the stage and had lights that went every direction that was all part of their stage show. The band came out on stage and ripped right into “Electric Eye.” Another part of their stage show was a large backdrop screen that showed numerous videos, lyrics to songs, the band performing on stage and footage of the crowd. The rest of the stage showcased the 50 Heavy Metal Years in Priest fashion with a display of a rusty industrial/post-apocalyptic scene.

During the second song “Riding On The Wind,” I started thinking to myself, Rob Halford is truly the Metal God. He was firing on all cylinders, and showing no sign of slowing down. Not only is 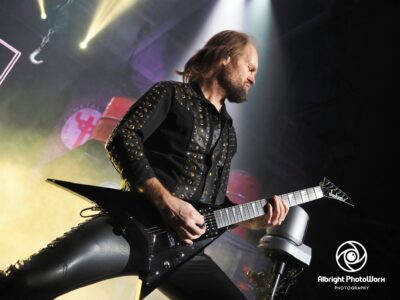 Priest known for the Metal God, but they are also known for their amazing guitar solos and dueling guitars. Ritchie Faulkner and Andy Sneap (who is touring as a replacement for Glenn Tipton), did a fantastic job trading solos and displaying synergy with their guitars the whole night. Bassist, Ian Hill, was rocking stage left next to drummer, Scott Travis.

It wasn’t until “You’ve Got Another Thing Comin'” that I heard the crowd the loudest all night. With a catalog of music that goes back 50 years, Judas Priest filled the night with some of their biggest hits and some of their deeper cuts. I know there are fans that didn’t get to hear certain songs they were hoping for (“Painkiller”), but it is also a treat to hear some of their songs that you might not have ever heard live.

Judas Priest did play two songs off their latest release, Firepower — the title track and one of my favorites, “Never The Heroes.”  Then the middle of the set saw some of their deeper cuts with “Beyond The Realms of Death,” “Devil’s Child,” and “Genocide.” 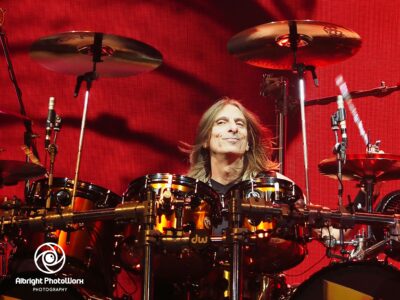 After “Halls of Valhalla,” Halford insisted the crowd echo back to him after he would do some chanting on the microphone.  Once he was pleased with our response, Judas Priest went into the Fleetwood Mac song “The Green Manalishi (With The Two Prong Crown).” Scott Travis introduced the next song as the song Mankato picked for Judas Priest to play live –“Screaming for Vengeance.”  Once that song was over, the band members said their goodbyes and left the stage.

I know this was my first time seeing Judas Priest, but I know well enough that Halford has to come out on his bike and sing “Hell Bent For Leather” which did happen once we heard the motorcycle start up. Closing out the night was “Breaking The Law” and “Living After Midnight.”

Both Queensrÿche and Judas Priest put on amazing shows. I was thoroughly impressed with how both bands sounded, performed, and interacted with the crowd. 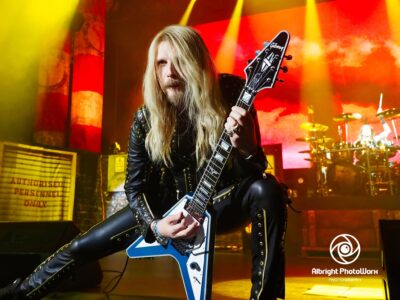