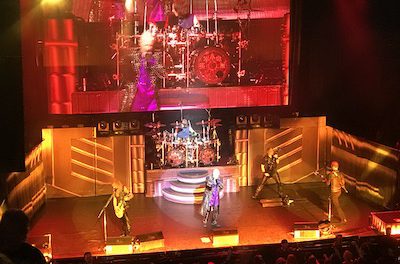 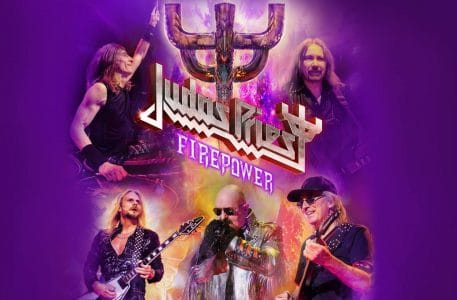 Judas Priest is one of those bands we’ve been wanting to catch for some time but haven’t been able to (we live in an obscure part of Florida). We knew we wanted to go to San Francisco this summer and when I saw Judas Priest was coming, we arranged the whole trip around their show.

We devoured pre-show food at Popson’s Burgers mainly because it was close to The Warfield and after an exotic lunch in Japantown, I wanted to balance that with something more familiar to me. Almost everybody was wearing a Scorpions, Iron Maiden, Judas Priest or other similar shirt and the restaurant’s soundtrack matched the shirts. Toward the end of our meal, Popson’s started playing the entire Firepower album. Lots of tour cases were stacked on the sidewalk, some of there were

stenciled Judas Priest, and various crew members were unloading equipment so there was a bit of a backstage feel to the whole experience.

The Warfield is a great venue. It opened in 1922 and has 2,300 seats. It’s big enough that bands can bring in a lot of the production and show, but small enough that there really are no bad or nosebleed seats. The Grateful Dead played numerous shows there and Slayer thought enough of The Warfield to record a live album on it stage, so there’s a lot of history here.  We’ve had it with the line skippers, front pushers, people tall enough to be NBA centers standing in front of us, people blocking our view with cellphones held right at eye level, and having to stay stuck and standing in the same spot all evening to keep our places, so we opted for reserved seats in the balcony close to the center and the edge (I bought tickets back in early December).  We’ve been soaked in the rain at festivals and burned to a crisp in the summer in outdoor Central Florida shows, so unless it’s a small club, free, or a rare opportunity, the current rule is reserved seats and air conditioning.

Uriah Heep opened up with a 60 minute set. I wasn’t familiar with them, so I bought a two-CD collection from 2003 that ended up containing most of their setlist. The collection didn’t stun me, but it wasn’t bad. Uriah Heep live, however, was a lot more powerful than the recorded version I listened to. At times, Uriah Heep sounded similar to Helloween and their vein of power metal. Bands often sound harder, faster, and heaver in concert, but this was especially true for Uriah Heep on this night. I am definitely glad I didn’t skip their set. 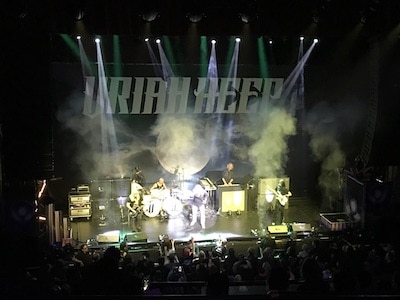 I distinctly recall that vocalist Bernie Shaw saying that the night’s setlist was not identical to the previous night’s setlist. However, the setlist that I found for both nights was identical. I trust my memory of Shaw, and I certainly believe Shaw would know what his band played in the previous 48 hours. Thus, I include the night’s list of songs with some unsureness. 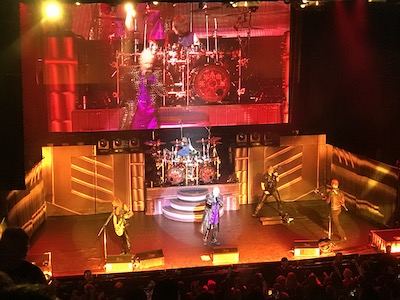 Judas Priest opened with “Necromancer.” Looking like a Mardi Gras Daddy, Rob Halford appeared in a purple outfit complete with a skull-tipped staff. Halford used a number of screeches, deep booms, and high notes indicating that his voice is completely intact. I’ve read that he doesn’t warm up before shows in order to save his voice for the public performance. While I do think his voice grew stronger as the concert progressed, I think he sounded fine from the very beginning. His is the timeless voice of boiling blood and crushed diamonds, jet planes breaking the sound barrier, the crackle of lightning, the soul leaving the body.

After “Necromancer”, Halford disappeared briefly behind the stage, which became a pattern. Sometimes he changed trench coats or jackets and sometimes I imagine, he was drinking the hot tea that he has talked about sipping in between songs to keep his throat clear and his voice strong.

Judas Priest performing “The Sentinel” live at the The Warfield in San Francisco, California, USA on June 25, 2019:

judas priest the sentinel live 6/25/19 at the warfield, san francisco.

“Out in the Cold” was otherworldly. A shimmering ball of light started rotating and the stage screen displayed a frigid outer space scene of planets and asteroids floating silently past one another in an endless cosmos, which reinforced the song’s feeling of 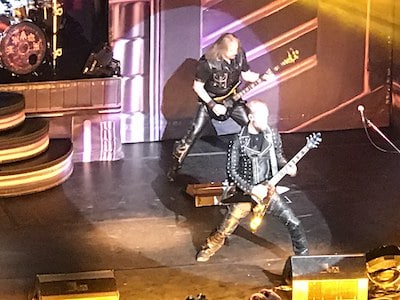 futilely trying to connect or reconnect with someone whose whereabouts are unknown. This was a real highlight.

Priest touched back on Redeemer of Souls with “Halls of Valhalla” and Halford used his death metal voice for the chorus. Before playing “No Surrender,” my favorite song from Firepower, Halford reminded us that “We never give up. We never give in. And like our hero Glenn, we say, ‘No surrender.’” I recall somewhere during one of the ’70s or ’80s songs, archival footage of Glenn Tipton playing guitar appeared on the video screen while Priest performed.

For some reason, San Francisco got “Hot Rockin’” on this night but not the previous night, which received the same setlist minus “Hot Rockin’.” While it’s not the first bonus song that I would have picked, I’ll take all the Priest I can get, and I did enjoy it more live than on Point of Entry.

The main set finished up with “All Guns Blazing,” which probably took the place of “Painkiller.” Again, Halford used his death metal voice for the chorus. If I could have chosen beforehand, I would probably have picked “Painkiller” instead, but “All Guns Blazing” was quite good. A three-song encore of the classic songs “Hell Bent for Leather” (with Halford riding a motorcycle on to the stage), “Breaking The Law,” and “Livin’ After Midnight” finished up the show. With that, it was time to head out into the foggy 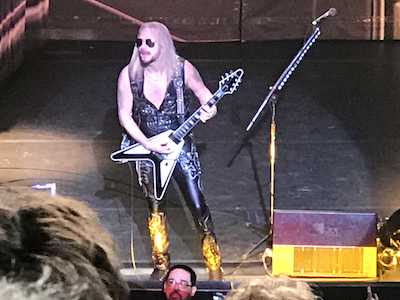 night and see what else the city would offer.

I appreciate that Judas Priest haven’t been playing the same setlist over and over, relying on mostly older songs with a sprinkling of new songs from recent, uneven albums that are intended to keep the band in the public eye, but don’t come close to matching the older catalog or pushing weak songs on us from their latest record to fill out half the show (it also helps that Firepower is such a consistent album and has so many strong songs). Instead, they play a lot of the classic material, mix in some setlist changes and underplayed tracks, and give us some current — but powerful — material as well. It’s the right balance. They have a good sense of and respect for what the fans want.  While I would have liked hearing “Turbo Lover,” “Painkiller,” and “Metal Gods,” I think there is a good chance these will show up in the 50thanniversary tour slated for 2020 that one might reasonably assume will showcase the classics and hits along with a few lesser-played gems (“Secrets of The Dead,” please).  And I can accept a tradeoff for some of the songs we did hear such as “Out In The Cold,” “No Surrender,” and “All Guns Blazing.” When a band has this many records, it’s tough to make a setlist that all fans will find perfect. I guess that’s just another reason to see them again live. 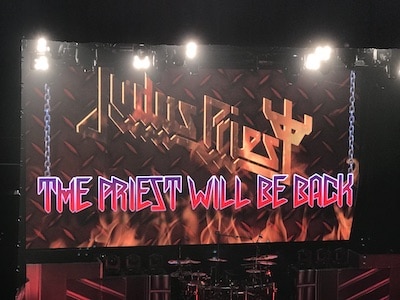 Judas Priest live @ the Warfield, 2nd Night. I was able to get a little over an hour of the show before my battery ran out. Killer setlist.