PORTLAND, THE PRIEST IS BACK! 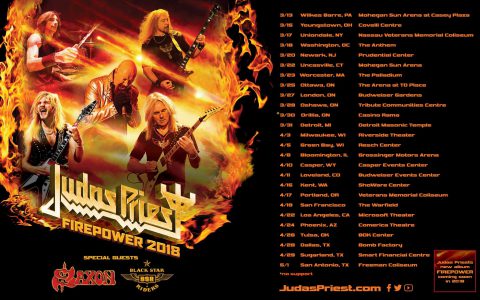 Judas Priest were snubbed by the Rock and Roll Hall of Fame in 2018, another epic fail by the voters. No matter, in 2018 Priest released one of their best records since Painkiller (1990). They’ve been working to get to this point with the reunion record Angel Of Retribution (2005) and Redeemer Of Souls (2014). Having discovered Priest in ‘86 when they issued Turbo, I was anxiously awaiting the tour dates only to find there would be no Portland, Oregon date. Bummer, but I would get my chance to see Priest in ‘88 when they performed at The Memorial Coliseum, in support of their album Ram It Down. The record was a mixed bag but the live show didn’t disappoint.

The last time Judas Priest were in this building was in 1991 on The Painkiller Tour. They had support acts Megadeth, which were riding high with their (then) latest effort Rust In Peace, and Testament who were promoting Souls Of Black. Not a bad line-up, right? Fast forward to the present time — Judas Priest performing in an arena in 2018? Yes, and they brought Black Star Riders and Saxon along with them this time around. One might have underestimated The Power of Priest (myself included). They had a strong showing in the 13,000 venue.

Black Star Riders hit the stage at about 6:55 pm, which was earlier than their 7:00 pm start time. You have to feel for them as they hit the stage before most fans were even in the arena. This evening, with a Blazers playoff game taking place next door, 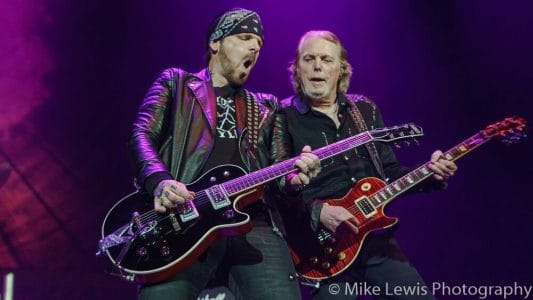 most fans were still circling around like sharks looking for parking. Black Star Riders opened with “All Hell Breaks Loose” which is the title track from their sophomore album. There were probably about 400-500 people in a 13,000 capacity building by the end of the song. The sound wasn’t mixed well. It could have been the acoustics were off because it’s an old building and it was nearly empty. There was zero energy from the audience. Even their second tune “Jailbreak” (Thin Lizzy) didn’t get much of a reaction. Perhaps they should have tackled “The Boys Are Back In Town?” It probably wouldn’t have mattered, either way. Black Star Riders put on a hell of a set with their limited allotment of time. Unfortunately, the lack of energy and reaction from the audience really sucked the life out of their set. It was really disappointing to know that people missed out on a great set from a band who made their Portland debut that night. Black Star Riders ended on a high note with the epic “Kingdom Of The Lost” and the stellar “Bound For Glory,” before disappearing from the stage about as quickly as they had emerged.

What can you say about Saxon? They’re not a household name in The United States. They are however a critically acclaimed cult band that has the respect of any heavy metal aficionado. Saxon are one of the founding fathers of The New Wave of British 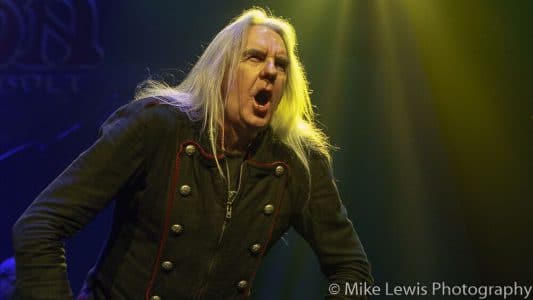 Heavy Metal, which has been instrumental in giving us Metallica, Megadeth, Anthrax, Slayer and the like. In a perfect world, Saxon would be as big in North America as Iron Maiden, but instead they are the cool underground metal band that kids discover and then share with their friends. Saxon have a new album released this winter titled Thunderbolt, which was preceded at the tail end of 2017 with a compilation of hits titled Decade Of The Eagle, which features a solid collection of Saxon hits all in one fantastic package. Saxon performed new tunes from their latest effort but it was hits like “Power And Glory,” “Motorcycle Man,” “Denim And Leather,” “Princess Of The Night,” and “Wheels Of Steel” that really hit the spot. The last time Saxon were in town, they performed at the now defunct Albrahma Theater to a jam packed crowd. This time around, they were in an arena and they really took advantage of the opportunity. Granted, it also helped that the arena was at ¾ capacity two songs deep into their set.

Unless you’ve been in a coma, as a metal fan, you’re aware that the news broke earlier in the year, that Judas Priest founding member Glenn Tipton has recently revealed that he was diagnosed with Parkinson’s roughly a decade ago. While Tipton 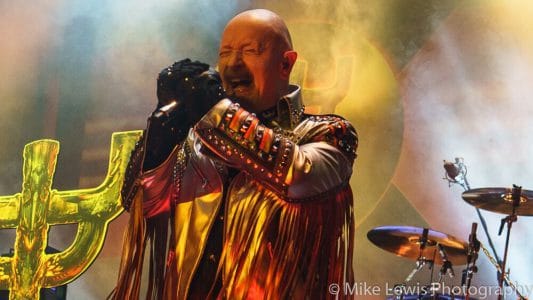 hasn’t left the band, his role has been limited. You also know that producer Andy Sneap (Arch Enemy, Exodus, Megadeth, Kreator) who is also an accomplished guitarist (Hell, Sabbat) was asked to fill in by Tipton himself. Sneap co-produced the latest album Firepower with long-time Priest producer Tom Allom (Loverboy, Def Leppard, Y&T).

One thing that has become clear over the course of the past couple of records and tours is how well guitarist Richie Faulkner has been revered by Judas Priest fans and how much of an integral part he is in the band. More so now that Tipton has been sidelined due to illness. While one can’t forget K.K. Downing as a Priest fan, Faulkner is doing the heavy lifting on this tour and the transition from K.K. to Faulkner was so seamless that they made it look incredibly easy. No question, Faulkner has rejuvenated Priest. He’s a showman, performer and he’s got chops. If you can imagine bassist Ian Hill on guitar, that would describe Andy Sneap. He mostly stands in place, plays the songs and is ‘stone faced.’ Sneap must be having the time life deep down inside or scared to death! We’d never know by looking at him, but he held down the fort in Tipton’s absence. 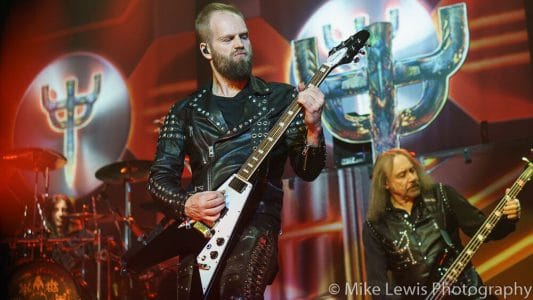 Rob Halford currently sounds the best he has sounded since the Angel of Retribution Tour. He struggled a little bit on “Painkiller” but you can forgive him for that. No 66 year old man could do what he can do vocally. There was a mix of new tunes — “Firepower,” “Evil Never Dies” and “Lightning Strikes” — classics like “Grinder,” “Turbo Lover,” “The Ripper,” “Bloodstone,” “Hellion/Electric Eye,” “Saints In Hell,” “Painkiller,” “You’ve Got Another Thing Comin’” and “Hell Bent For Leather.” The encore featured Glenn Tipton who appeared from behind a curtain stage right armed with his guitar, walking gingerly to his designated spot on stage vacacted by Sneap. With a couple chest pumps and a thank you to the audience, Priest launched into “Metal Gods” which got the audience into a frenzy. “Breaking The Law” and “Living After Midnight” closed out the show. Earlier in the show, Halford said “Portland, The Priest is back!” They most certainly are.