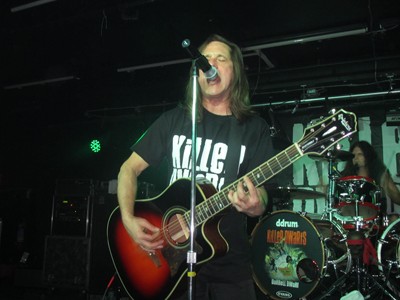 A BLIZZARD AND THE DWARFS

If ever Killer Dwarfs frontman Russ ‘Dwarf’ Graham‘s rock star career does not pan out, he has all of the necessary talent to be an excellent meteorologist. About four months ago, the Killer Dwarfs were headlining the sold out grand opening of the Rockpile East in Toronto. At some point during that show, Russ Dwarf announced that the band would return to the same venue on February 1, 2014. Probably half-jokingly, Russ Dwarf then pointed out that, as luck would have it for the Killer Dwarfs, there would likely be a snow storm on that day. Fast forward to February 1st, and lo and behold, that is exactly what was taking place on the day of the show — a full-on blizzard.

I arrived at the venue a little after 10 pm in the middle of the set of veteran Frank Soda — who I later learned was the only opening act for the evening. This seemed quite unusual for an event at the Rockpile, taking into account that on any given night there can be between three to four openers for an established headlining act — such as the last time the Killer Dwarfs played there. Some of the Facebook posters advertising the Killer Dwarfs and Frank Soda show indicated that they would be “blowing things up”. Given that I was not familiar with Soda, I did not know what that meant, but towards the tail end of his set he appeared with his guitar strapped to his shoulder and a television covering his head! A number of spectators then made their way close to the stage with cameras in hand. Obviously something was going to happen, but I did not know what I was in store for. Shortly after, there was a loud bang, orange colors, and smoke, as the television blew up while on Soda‘s face! I definitely had never seen anything like that before and I wonder whether the guitarist has any hearing left, given that I heard that his glory days, including presumably his television blowing gimmick, date back to the 1970s. 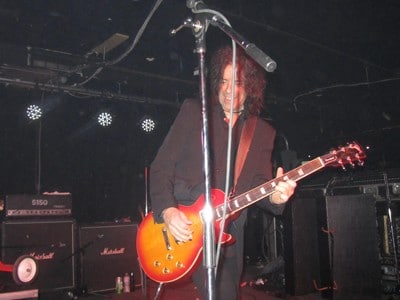 The Killer Dwarfs‘ show on this night felt very similar to their show at the Rockpile East less than four months ago. The set list was much the same, albeit in a different order and with three extra songs. There was probably a little more Russ Dwarf banter given the extra songs and definitely less crowd surfing from the frontman who might be described as diminutive in stature but big in charisma. After the circus like music intro, the Killer Dwarfs hit the stage with “Comin’ Through”, one of my favorites from their repertoire and one of the extra songs added to their set on this night. The crowd was into it right from the start and the Dwarfs kept the pedal to the metal before Russ Dwarf greeted the crowd. Just like any good meteorologist, the frontman was quick to point out that his snow storm prediction from a few months ago had come true and he revealed an obvious observation — “It snows in Canada”. 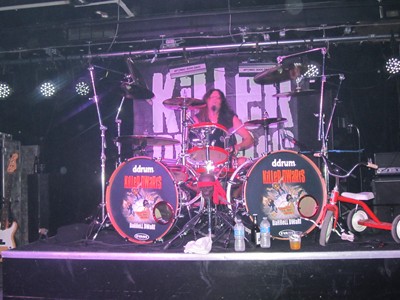 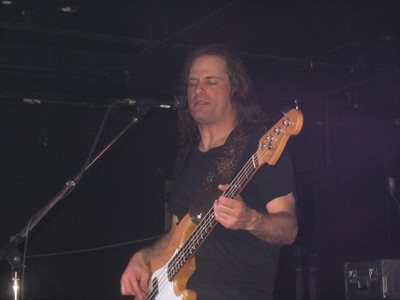 The rest of the Killer Dwarfs were in fine form with guitarist Gerry ‘Cod Dwarf’ Finn sporting a large grin for pretty much the entire show, drummer Darrell ‘Dwarf’ Millar pounding away on his new “pirate” drum kit, and newcomer Johnny ‘Dwarf’ Fenton being a rock on the bass. The one person who seemed semi-unhappy with his performance was vocalist Russ Dwarf himself, who on a number of occasions complained about how he sounded, even comparing his voice to Alfalfa. When handed a note, which he read word for word for the crowd and which went something like, “We are recording Toronto, let’s hear you!! Make some noize live CD!!”, the singer mentioned that his vocals for the night would be redone or at least tinkered with for any live release from this night. Whether Russ Dwarf was having a bad night according to his likely own high standards, his voice on this night sounded good to me. If this was an “off” night for him voice wise, I much prefer his “off” over many of his peers’ “best” nights. No need to mention names, but we all know of heavy metal vocalists from the ’80s era whose voices are simply shot some thirty years later. 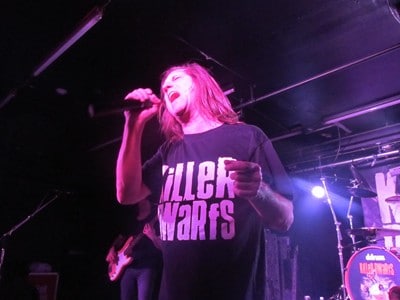 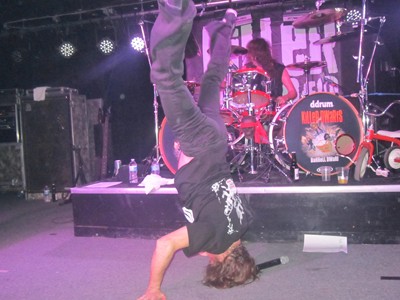 But back to the Killer Dwarfs show! Russ Dwarf announced that the band would be playing songs from all of their albums throughout the night. That was obviously great news as that pretty much guaranteed that one of my personal favorites, and the first Killer Dwarfs song that I have ever heard via its video, “Heavy Mental Breakdown” would be played sometime during the performance. As the show progressed, Russ Dwarf was, from time to time, checking the set list. At one point he jokingly blurted out something to the tune of, “Who came up with this set list. I did not approve this!” Newmarket’s (a town arguably in the greater Toronto area) own Russ Dwarf was truly in fine form giving a little shot to Toronto’s now world famous mayor Rob Ford, indicating that he knew half the people in the audience, and even pointing out two diehard Toronto rock fans — Jackie Lynn and a woman by the name of Cindy. The funny frontman even brought out the Killer Dwarfs‘ infamous child size tricycle which was parked next to the drum kit, and which he took for a little spin on stage. He then pointed out something to the likes of, “How many 53 year olds do you see riding a tricycle?” You are right Russ, likely very few and I know of only one — you! 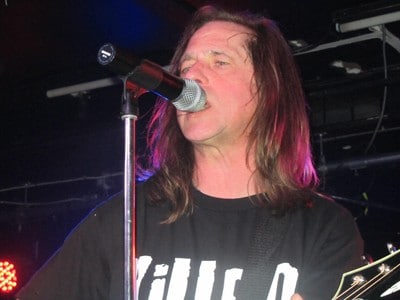 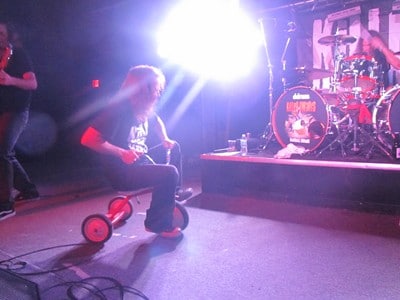 What more can I say about the Killer Dwarfs‘ show? Every song that they played was a good one and I was particularly pleased with the addition of the three extra songs, including one of Russ Dwarf‘s personal favorites — “All That We Dream”. The Killer Dwarfs closed out their set with the two sing along classics “Stand Tall” and “Keep The Spirit Alive” before playing two encores — “Dirty Weapons” and the best song of the evening, “Heavy Mental Breakdown”. The one surprising aspect of the show was the continued little love shown by the band to their solid and recently released ‘lost album’ ‘Start @ One’, since only one song was played from that CD. Perhaps this is because the band does not want to leave out any of their better known songs from the live set. Towards the end of the show, Russ Dwarf warned the crowd that the Killer Dwarfs only had one more Canadian date (in London, Ontario — two hours away from Toronto) to play in 2014, so although it is likely good news for all you Dwarfs fans in other countries, this means that I will have to wait a little bit before seeing the Killer Dwarfs live in concert again.