There comes a time in your life when you have to make tough choices. Got to choose which shows to go. Because there are too many to see. There’s a chance you might get it right. I knew that I made the right choice by electing to go see the Killer Dwarfs play their real hometown (i.e. Oshawa and not Toronto) show at the Oshawa Music Hall. The choices were aplenty with Lynch Mob, Girlschool with Crucified Barbara as support, Joe Perry (taking part in a jam to end his Toronto Rock ‘N’ Roll Fantasy Camp), Slaughter and Hellbros all playing in Toronto within a few days of the Killer Dwarfs‘ hometown gig. With so many choices and limited time on my part, the logical choice was to go see the Killer Dwarfs play since I knew that the group quite simply always delivers a great show live. I do note that I would have definitely gone to see Lynch Mob play had I not been away that weekend. The amount of shows in such a short amount of time is apparently one of the curses of living in a country where winters are considered “freezing” by many. During the last winter season, it seemed that there were hardly any gigs to attend but during this spring and upcoming summer, a hard rock concert goer in Toronto is simply flooded with way too many choices!

The Killer Dwarfs‘ hometown gig was going to be extra special because rumour had it that some original ex-Killer Dwarfs band members might be making an appearance onstage. Closer to the show, it was confirmed that original Dwarfs guitarist Bryce “Dwarf” Trewin would be taking the stage to play “Heavy Mental Breakdown” with the band, something which he had not done since the mid-80s! As has become a bad habit for me, I fell asleep again while putting my infant daughter to sleep and when I woke up just shortly before 10:00 pm, it was definitely time to go, especially since it would likely take me 45 minutes of driving with no traffic to get to the venue. I arrived at the Oshawa Music Hall shortly before 11:00 pm and the last opening band was taking its gear off the stage so this was perfect timing as far as I was concerned! The stage was actually quite high up so if you were next to the stage, your head — depending on your height of course — would be just about level with the band members’ lower part of their legs. Although I knew a few people that might be in the audience, I did not see them as I made my way through the venue towards the stage. Despite arriving quite late, I was able to make my way up front right next to where bassist Johnny “Dwarf” Fenton was likely to appear. There was a small stage “ramp” that allowed the performers to walk out a bit further into the audience while maintaining the same height over the audience, As it turned out, I had to turn around a bunch of times during the Killer Dwarfs‘ set whenever Russ “Dwarf” Graham ventured out onto that little “ramp”. Oddly enough, there was a guitar case right next to where I was standing nestled between the stage and the “ramp” that stayed there during the entire Killer Dwarfs‘ set. At first, I was a bit concerned that I might get pushed into that guitar case once the Dwarfs‘ set got underway but my concerns turned out to be unfounded. 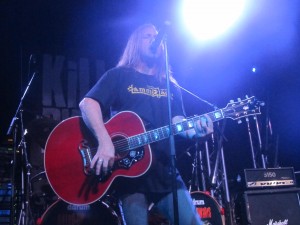 The Killer Dwarfs hit the stage with a double shot of “Comin’ Through” and “Hard Luck Town”, two songs that never get old to listen to live. It was awesome to have bassist Johnny Dwarf towering right over me head banging while playing his bass. Lead guitarist Gerry “Cod Dwarf” Finn was on the other side of the stage and all smiles as always. I don’t think that I have ever seen Gerry Dwarf not smile both on and off the stage. After the first two songs, frontman Russ Dwarf addressed the hometown audience by commenting that Oshawa was a “great place to start a fucking rock and roll band” which got roars of approval from the crowd. Next up was “Last Laugh” during which I received a punch — yes, a punch — between my chest and left shoulder and a wave of long hair from lead singer Russ Dwarf who was towering over me from the “ramp” stage. I guess this was Russ Dwarf‘s way of saying “hello”, which was fine with me! Russ Dwarf then brought out a big red acoustic guitar as the band launched into what is becoming one of my favorite Killer Dwarfs‘ song: “Driftin’ Back”. After that song, Russ Dwarf even gave me his guitar pick, the thrill of which never gets old! Unlike other frontmen, Russ Dwarf‘s stage banter seems to get tailored for the night in question. Russ Dwarf‘s dry wit was on full display as he asked the audience what they “had been up to in the last 35 years?” before the band launched into “Union Of Pride”. After that song, drummer Darrell “Dwarf” Miller — who reminds me of Motley Crue’s Tommy Lee in terms of height and body proportions, all around craziness and rather sociable personality — came out from behind his drum kit to address the audience. Darrell Dwarf pointed out that he and Russ Dwarf had started the band 35 years ago and that Gerry Dwarf had been in the band for 25 years. I guess the many years when the band had disbanded or on break count in that regard. At the end, Darrell Dwarf introduced the entire band to the audience before Russ Dwarf strapped on his big red acoustic guitar once again as the band launched into its sing along classic “Doesn’t Matter”. I was a little surprised when the Canadian rockers launched into “Stand Tall (Stick To Your Guns)” within the eight song of their set and even more surprised when the band played their anthem “Keep The Spirit Alive” as the ninth song of their set because that was clearly a signal that the group’s set was unfortunately already coming to a close. One scary moment came during I believe “Keep The Spirit Alive” when Russ Dwarf made his way to the end of the “ramp” portion of the stage to do his traditional crowd surfing while being held up over the heads of members of the audience. I turned around to look at the main stage very briefly and when I looked back at Russ Dwarf, he was on the ground but apparently still singing! The always great sounding Russ Dwarf then made his way into the audience hugging various people while seemingly never faltering while singing the band’s anthem. Towards the end of the evening, Russ Dwarf grabbed the infamous Killer Dwarfs‘ tricycle but instead of riding it smashed into the ground to the chagrin of the band’s manager Rob Zakojc who then got up on stage to push the tricycle to the side while quipping something to the effect about having just put it back together after Russ Dwarf had destroyed the tricycle about 45 days ago at the M3 Rock Festival in Columbia, Maryland. Speaking of the M3 Rock Festival, it was at that time that I first met fellow area Torontonian and new friend Marysia who came by during the Killer Dwarfs‘ show in Oshawa where I was stationed near the stage to say hello. Ironically, we had met along with our respective cohorts on day two of the M3 Rock Festival while waiting for the Killer Dwarfs to hit the stage. Funny, how you travel nine hours away from your city to meet someone who attends a lot of the same concerts as you in your own city. One thing that I had never noticed before was how guitarist Gerry Dwarf has tons of tattoos as I had always seen him with a jacket on but this time, he took it off to reveal a multitude of tattoos all over both of his arms, One cool feature on this night was when band manager Zakojc came up onstage to draw a name from the audience with the lucky raffle winner getting a rare vinyl copy of the Killer Dwarfs‘ Stand Tall record, which apparently sells for $500 on ebay and the opportunity to have all of the Killer Dwarfs‘ band members autograph the album. The highlight of the night was definitely when original Killer Dwarfs‘ guitarist Bryce Trewin got up onstage to join the band through a killer rendition of “Heavy Mental Breakdown”. The big smile on Trewin‘s face said it all as he was really rocking out to the song while it was being played. Check out the video courtesy of Drew Masters who is well known for his M.E.A.T magazine publication from ’89 to ’95. After the Killer Dwarfs — old and new — left the stage, the band quickly came back for one encore with “Dirty Weapons”. I would have liked to hear a few more songs from the Killer Dwarfs as eleven songs from any headlining act is definitely on the short side! Towards the end of the band’s set, I was able to take a glance at the setlist that was posted on stage and it seems that at least one song “Start @ One” was intended to be part of the set but not played. One thing I noticed as well after the fact while writing this review was that the Killer Dwarfs‘ setlist on this night was pretty much the same and in the same order minus a few songs as when they played Toronto back in February 2014. Nevertheless, the Killer Dwarfs put on a great show once again and I would go see them play again — even if it is more or less the same setlist — in a heartbeat!