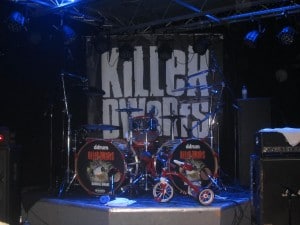 It’s always very cool to witness history in the making! It does not happen too often when I am attending concerts / gigs but during the last two Killer Dwarfs shows that I attended, history indeed was being made. About three months prior, I had witnessed the Killer Dwarfs bring back Bryce “Dwarf” Trewin on stage with them for a blistering rendition of the Canadian group’s classic “Heavy Mental Breakdown” at a venue about 45 minutes from downtown Toronto. It had been more than 30 years at that point since Trewin had played on a stage with the Killer Dwarfs. I got to say that Trewin looked like he was having soooo much fun up there that I thought that he might join the Dwarfs again on stage in the future.

Fast forward a couple of months later and the Killer Dwarfs’ next gig in the Toronto area was going to be at Toronto’s Rockpile which has to be considered the number one venue for heavy metal acts more or less around the Dwarfs’ popularity (in Toronto) to play at. Stryper, Red Dragon Cartel, Lynch Mob, John Corabi — the list goes on and on in terms of great artists / bands that have recently graced the Rockpile’s stage. I would venture to guess that at least one third of the shows that I attend are at the trustworthy Rockpile. But I digress – as the days got closer to the Killer Dwarfs’ gig at the Rockpile, drummer Darrell “Dwarf” Millar let the cat out of the bag and announced that the group’s original first album line-up would be getting together on stage for the first time in 32 years!

Having never seen the Dwarfs play live back in their glory days of the early ‘80s to the early ‘90s, there was no need to say that I was pumped to witness this reunion! Apparently, I was not the only one because as I drove my vehicle into the Rockpile’s parking lot about 30 minutes before the Dwarfs were likely to hit the stage, I could see a sea of vehicles inside the lot. Within a few minutes, I was inside the Rockpile and quickly made a beeline towards the stage since I knew that as soon as the last opening act – which turned out to be the Gene Pool — had finished playing, the crowd would surely bunch up and it would be difficult to get near the stage. As fate would have it, I was able to easily make my way through the general admission portion of the crowd and get to within one row of people from the stage. I was there met with many familiar faces. Gene Pool only had about two songs left to play and the turnover was pretty quick before not one, not two, but three different people were introducing the Killer Dwarfs before they hit the stage. Frankly, the band really needs no introduction and surely not in its own stomping grounds of Toronto. 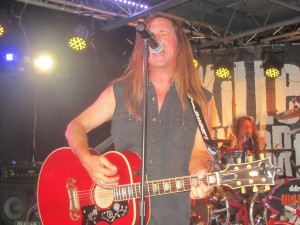 Nevertheless, first up was radio mogul Joe Cahill who got on stage to say a few words before being joined by former M.E.A.T. magazine editor Drew Masters who looked quite “happy” and admitted being both high and drunk. After the two men got through their intros, the lights dimmed again before Kate Campbell – a friend of the band – got up on stage to introduce the Killer Dwarfs again… Clearly, there was a bit of overkill with the introductions. Finally, the Killer Dwarfs hit the stage to the familiar sounds of “Comin’ Through.” Right from the start, the crowd seemed really into it as the Dwarfs stormed through their usual setlist playing “Hard Luck Town” and “Last Laugh” before slowing things down with one of my favorites “Driftin’ Back.” 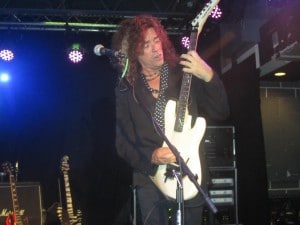 For those who are not familiar with the Killer Dwarfs – and if you’re not, you should really rectify that because you are missing out — the band’s diminutive frontman Russ “Dwarf” Graham has the tendency to crowd surf at least a few times each show. This time around, it seemed that every second song, Graham was out there on top of people’s heads. There is always the risk that Graham can fall onto the unforgiving general admission floor if people do not hold him up such as what happened three months ago so it is best for Graham to wisely pick his spots in the audience where he can safely do his crowd surfing. This time around, Graham essentially chose exactly where I was standing – along with one other spot – to do his crowd surfing so over and over again, I was lifting various body parts of his into the air. Many times, Graham would get back on stage with his sleeveless collar shirt totally unbuttoned from the sea of hands grabbing at him during his crowd surfing antics.

Being touched by various over zealous fans is certainly part of the gig for rock performers and definitely for ones such as Graham that voluntarily venture into the audience. That being said, I got to say that I found it a little odd when one guy standing next to me started slowly caressing – yes, caressing — Graham’s left arm while the frontman was on stage near the audience. Graham did not seem to notice or feel the caress, and that was that… 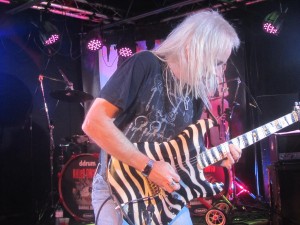 A little more than half way through the Killer Dwarfs’ set, history was about to be made. This time, a longstanding fan of the band – I forget his name – got up on stage to say a few words including that he had witnessed 80 to 90 Killer Dwarfs shows in the last 30 plus years. That was quite impressive considering that a lot of people likely do not attend 80 to 90 shows in their lifetime, let alone for one group only. Before long, the original first album line-up of the Killer Dwarfs was up on stage – Millar, Graham, Trewin and Ange “Dwarf” Fodero – the latter of which had apparently flown all the way up from Mexico for the occasion! Killer Dwarfs’ current guitarist Gerry “Dwarf” Finn and Johnny “Dwarf” Fenton then both left the stage to let the four original first album Dwarfs bring the house down with a very cool rendition of “Heavy Mental Breakdown.” 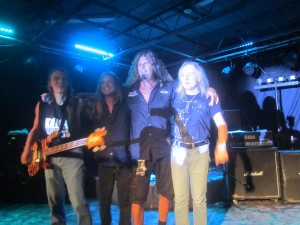 Prior to the band launching into their first album’s classic song, Graham spoke a little bit about the group’s beginnings when the band would play tons and tons of shows in these little shit holes and how they were literally starving while playing a number of gigs at one small joint for a series of days. I won’t repeat the story in case Graham uses it in future shows but let’s just say the pirate in the band (i.e. Millar) got quite resourceful to get a decent meal. In addition, before the song was to start, Trewin played the intro riff to another song to which funny frontman Graham quickly stated, “No. Don’t do that. Do the other one.” before turning to the crowd and humorously stating, “See. This is why we broke up.” To be fair to Trewin, the Killer Dwarfs had previously advertised that they would be playing two songs on stage with the original line-up but apparently that fell by the wayside because the original first album line-up only ended up playing “Heavy Mental Breakdown.” In any event, it was a lot of fun to see all four guys tear it up on the stage and the foursome took a well deserved bow at the end of the song. 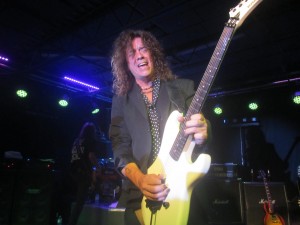 From then on, the Killer Dwarfs with Finn and Fenton replacing Trewin and Fodero finished their set with their big three of “Stand Tall (Stick To Your Guns),” “Keep The Spirit Alive” and the encore “Dirty Weapons.” Those three songs capped off an excellent performance from the Killer Dwarfs in front of a rabid packed crowd that seemed really into it. I would of course have liked if the Killer Dwarfs had altered their setlist somewhat, played more songs and threw in a few songs that they do not seemingly play anymore such as “Startin’ To Shine” and/or a few tracks from their last album Start @ One which was released back in 2013. In any case, I felt like I got more than my money’s worth despite the short setlist.