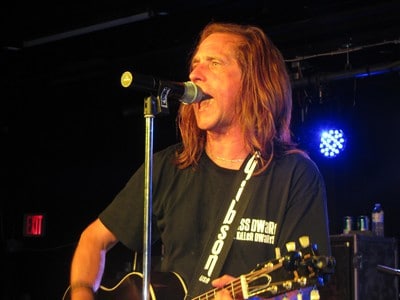 What is the best way to open a brand new rock concert hall in Toronto? Get the legendary and very entertaining Killer Dwarfs (who originate from Toronto) to headline and play their “reunion” show at the venue. Even better is to add red hot Toronto sleaze rock sensation Diemonds as the “official” opening band. The grand opening of the Rockpile East in Toronto had all of the makings of an incredible and memorable night so my expectations — as is almost always the case — were high.

The Killer Dwarfs show in Toronto was originally advertised as the band’s “reunion” show after their last live performance some eight years ago and no released material of any kind in about twelve years. However, in the interim, the Killer Dwarfs got quite busy starting a tour in late August and releasing ‘Start @ One’ — their “lost album” from twenty years ago — on September 6th. Accordingly, even though the Killer Dwarfs‘ show at the Rockpile East was not really a “reunion” show, it was still very special as it was the band’s homecoming concert in front of a sold out crowd of fans, family and friends.

I arrived at the venue a little later than the advertised start time partly to skip some of the opening bands that I had never heard of. A few weeks back, I noted that there were three additional bands — Mortal Fear, Flux 440 and Raised Emotionally Dead — scheduled to open for the Killer Dwarfs. The Rockpile East’s sister club in Toronto — Rockpile West — has made it a habit of lining up three to four opening acts before the headlining band makes its way to the stage usually by 11 pm, or even later. That is great news for local bands needing some exposure and presumably for the venue itself in terms of its revenue intake. I readily admit to having my first live experience with tons of great local bands including Last Bullet, J’Nai, Reverse Grip and Revolution at the Rockpile West. However, it can be tiring and long to have to sit and/or stand while several bands play and get their equipment on and off the stage before you can hear the band that you paid to see. In any case, if that is the “price” that I have to pay to see more rock concerts in Toronto, so be it. By the time I got to the Rockpile East at about 9:00 pm, the venue was already quite busy but it was still early enough for me to secure a great spot near the stage.

The Rockpile East venue was quite impressive — it seemed huge! The stage area was quite deep and long in a rectangle type shape with a very deep general admission area. I do not know the capacity for this new venue but it looked like 500 to 1,000 people could fit in semi-comfortably. My hat goes off to the Rockpile owner(s) for keeping rock alive almost singlehandedly in Toronto. 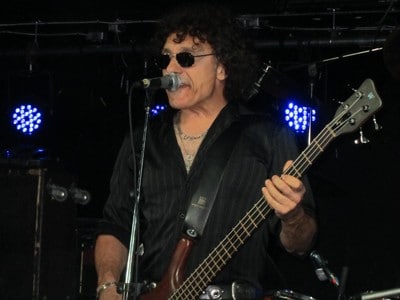 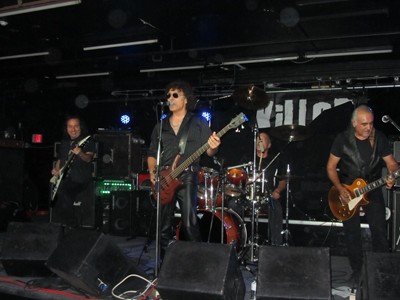 As it turns out, I should have arrived much later as I had to wait more than two hours and for two bands — unknown to me — to get through their respective sets before Diemonds would hit the stage a little after 11 pm. The first band that I saw was Flux 440. They played a straightforward set of hard rock songs and I liked all of the seven songs that they played. The best crowd reaction for Flux 440 was when they played a cover of UFO‘s “Lights Out”. 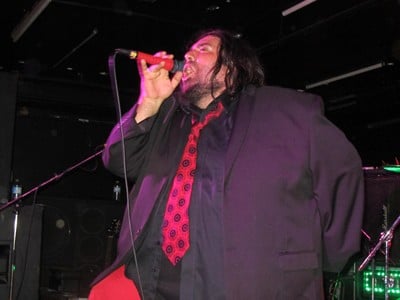 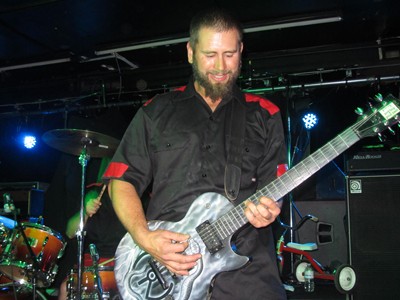 The next band was an eclectic alternative type group by the name of Raised Emotionally Dead. All five band members wore loud red pants or long shorts with varying black tops. The singer was a big looking guy who did not fit the usual profile of a band’s frontman. The group had varying ladies dressed up, sometimes in Gothic wear, on stage during certain songs. It is difficult to describe the band’s sound but I would put it as a heavy with some alternative twists to it. My favorite Raised Emotionally Dead songs played during the night were “Shed It” and “Selfish”. While I was excited to hear that the band would play a cover of KISS‘ disco “classic” “I Was Made For Loving You” as their fourth song of a nine song set, the band’s version of the song was quite heavy, different and unfortunately mostly not to my liking. While the band sounded pretty good on a first listen, I was happy when their set was done since I was here to see Diemonds and Killer Dwarfs. 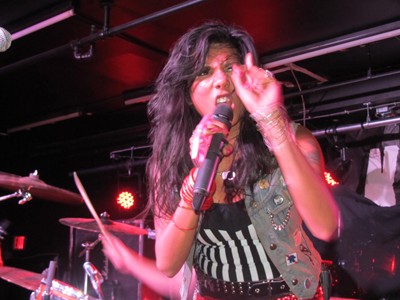 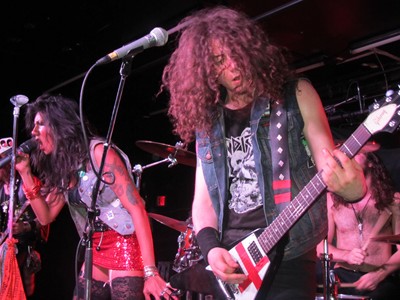 Diemonds took to the stage a little after 11 pm. The band had promised a “brand new set” and they certainly delivered. Five of the eight songs that they played — by my count — were brand new yet to be released songs. All five of the new songs sounded really good and I hope that Diemonds will be releasing a new CD in the near future. It’s hard to believe that the band has already been in existence for seven years, as lead vocalist Priya Panda pointed out. Unfortunately for Diemonds, their set was hindered by some sound issues including no sound emanating from Panda‘s brass knuckle microphone during most of the first song and a temporary lack of sound for guitarist Dan Dekay during a portion of another. Given that Diemonds played so much new unreleased material, whenever they did play some of their songs from their absolutely killer CD ‘The Bad Pack’, it was like getting to the icing portion when eating a cake — what a treat! Three songs were played from ‘The Bad Pack’ — “Get The Fuck Out”, “Trick Or Treat” and “Take On The Night” — and they all sounded great as I gladly and wholeheartedly sang along to them. Diemonds‘ set was too short, and I wonder why Raised Emotionally Dead got to play one more song than Diemonds when the latter was the “official” opening act. 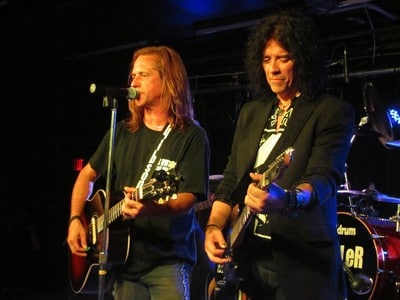 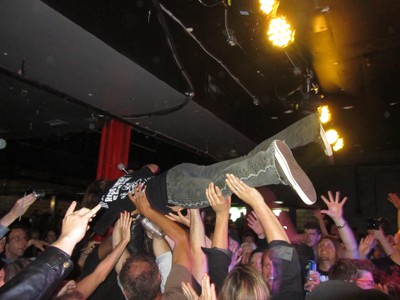 Shortly after midnight, in front of a packed crowd at the Rockpile East, the Killer Dwarfs finally hit the stage with their classic “Stand Tall”. The band sounded really tight! What struck me the most was how good diminutive frontman and lead vocalist Russ “Dwarf” Graham sounded. His voice did not seem to have suffered from any wear and tear, and unlike many singers who have been at it for thirty plus years, he can seemingly still hit all the notes (check out his recent ‘Wireless’ CD for just how good his voice remains to this day). While the rest of the Killer Dwarfs were no slouches on this night, Russ Dwarf clearly stole the show from start to finish. Funny banter to the crowd — check. Surfing on top of the audience — check (at least five times). Falling down and rolling all over the stage floor — check. Doing a headstand — check. Russ Dwarf‘s stage antics are a hallmark of any Killer Dwarfs‘ show and he did not disappoint! I did notice a small kids’ tricycle near the drum set which Russ Dwarf alluded to but he unfortunately did not end up using it, as far as I could see.

All of the Killer Dwarfs‘ hits, and most of their best songs, were played including “Last Laugh”, “Doesn’t Matter” and “Nothin’ Gets Nothin'”. At one point, Russ Dwarf shared some good news with the crowd that the Killer Dwarfs would be playing at the Rockpile East again on February 1st (presumably in 2014). He jokingly added that this would likely be the day when Toronto would be hit with a snowstorm. One thing that I was surprised at was that the Killer Dwarfs only played one song — the title track — from their new “lost album” ‘Start @ One’. This was disappointing given that the new album is a good one, the Killer Dwarfs‘ current tour is apparently called “Start @ One”, and the band only ended up playing 11 songs — by my count — in total. The group ended their show with the crowd pleaser “Keep The Spirit Alive”. Sadly, the encore only consisted of one (stellar) song — “Dirty Weapons”. 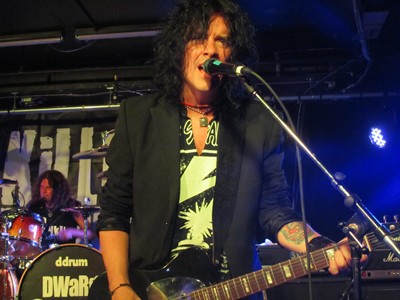 Since the Killer Dwarfs had only performed 11 songs and they still had tons of songs left that they could play, including “We Stand Alone”, “Comin’ Through” or something from their new CD, I was hoping that the band would come back for at least one more encore but instead it was announced that the band would be coming out in 20 minutes to sign stuff at their merchandise booth. I did not stick around for that as it was getting late (1:15 am or so) and I was not going to wait for the Killer Dwarfs to do their meet and greet with others before finding out if more songs would eventually be played. I hope that the Killer Dwarfs ended up going back onstage later on to play a few more songs for whichever crowd was still there given that I would have thought that the Killer Dwarfs‘ homecoming show in Toronto would have included more songs than what I heard from them.

At the end of the day, the Killer Dwarfs put on a great but short (get the pun?) show and I will most likely go see them again in February assuming I am available on that date. 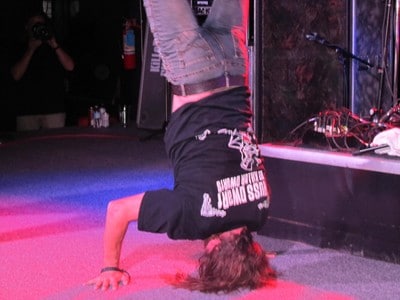 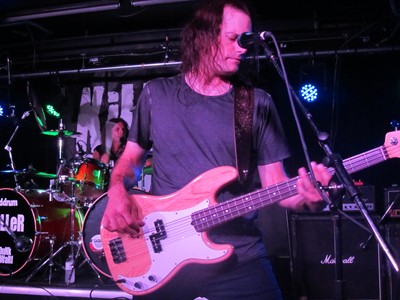