RINGING THE NEW YEAR WITH THE DWARFS 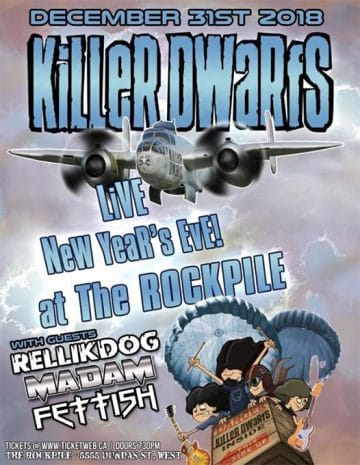 I wasn’t planning on attending the Killer Dwarfs‘ concert on New Year’s Eve at The Rockpile knowing that my wife had made plans for us and the kids to spend some fun and quality time with another family. However, I realized in the afternoon of December 31st that our New Year’s Eve plans might end early meaning that I would be the only one up at around Midnight to actually ring in the new year. My wife had to work the next morning so odds are that our guests would leave by 10:00 pm or so and my wife and kids would be in bed by 11:00 pm. I double-checked on Facebook to see if the Killer Dwarfs‘ New Year’s Eve show had already sold out and luckily, the Facebook page indicated that there would still be some tickets at the door. Accordingly, I kept the idea of seeing the Dwarfs play live that evening in my back pocket so to speak. Everything kind of fell into place as at about 10:23 pm, our guests had left our home and it was time to put the kids to the bed. Given that seeing the Killer Dwarfs playing live was now a real possibility, I checked the Facebook posting for the show to see if any set times had been posted. As usual for Rockpile shows, the set times were posted by someone and I was pleased to see that the Dwarfs were scheduled to go on at 11:15 pm.

With my wife needing to get some sleep prior to her early morning shift, I waited patiently for my youngest daughter to finally fall asleep. Alas, it was now 11:16 pm but I decided to head out in any case hoping that there might be a few delays before the Dwarfs hit the stage. Obviously, the roads were quite empty so I made it to The Rockpile in good time. As I parked my vehicle, I noticed that there was only one person standing in front of The Rockpile (where the smokers hang out since you can’t smoke inside the establishment) meaning that it was likely that the Dwarfs had already started playing. I was expecting to pay $35 to $40 to get in and was quite surprised to learn that the price was set at $60. I guess that prices got hiked for the New Year’s Celebration. I would have probably stayed home if I knew that I was shelling out $60 to see the Dwarfs play a little over an hour but since I was a few seconds from getting in, I forked out the cash.

I was pleased to find out that the Killer Dwarfs had just started their set so I might have missed the opening minute of their set and that’s about it. The familiar sounds of the song “Comin’ Through” were blasting from the stage area. I made my way past some of the tables nestled near the outskirts of the stage towards the standing general admission area. I was able to get within 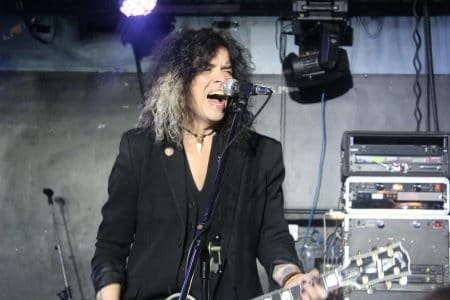 four of five rows of the stage. There were lots of familiar faces as it tends to be a lot of the same faithful people that attend concerts from the ’80s hard rock / heavy metal era at The Rockpile. Given that the Killer Dwarfs originate from the city of Oshawa, which is about 45 minutes from Toronto, they benefit from a loyal crowd who regularly attend their concerts. Not only were there quite a few familiar faces from past Killer Dwarfs concerts in the greater Toronto area, there were also many people that I “knew” (very loosely speaking) from their regular Facebook postings. I had experienced a similar situation when I last attended the M3 Rock Festival as all of a sudden, I was seeing all of these people that I “knew” from their Facebook postings. It’s really an odd feeling in some ways and part of the wonders of the internet and especially social media where you may know tons of things about someone but don’t really know them at all. But enough in that regard, back to the Killer Dwarfs concert.

I had last seen the Killer Dwarfs play in April 2018 — funny enough at The Rockpile — but I did not bother doing a review of that show as I left disappointed and especially after seeing The Lazys put on such a brilliant performance the night before. I 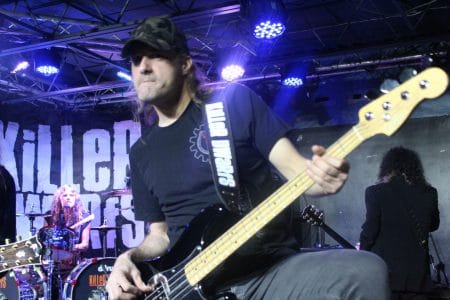 mentioned a little about that Dwarfs‘ concert in my review of the band’s new live album Live No Guff!. This time around, the Killer Dwarfs frontman Russ “Dwarf” Graham was more positive as there were no jokes about how old he was. Graham was able to get some chuckles from the fans on quite a few occasions. It did feel like Graham and even guitarist Gerry “Dwarf” Finn and drummer Darrell “Dwarf” Millar made too many references to specific people in the audience instead of talking to the crowd as a whole. I get that the Dwarfs would acknowledge specific people in the audience such as a gentleman by the name of Edward Lashua who apparently came all the way from the state of Massachusetts (USA) to attend the show but I would much rather hear fun stories from the group’s past rather than have various people in the audience acknowledged between songs.

I was impressed with the Killer Dwarfs band members’ enthusiasm while playing their show. All of them really looked like they were having a lot of fun up there. It was fun to see Graham and Finn joke around with bassist Johnny Fenton advising him that he should not address the audience until he had reached ten years in the band. Graham also took the time to thank the crowd on a number of occasions for all the support that had been given to the Killer Dwarfs over their 37 year history. While all 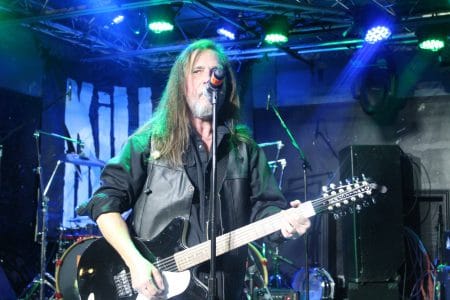 the songs played by the Killer Dwarfs were good, they unfortunately played seemingly the same set in the exact same order once again. In fact, if you look at the song order for the live record Live No Guff!, you’ll see that the Dwarfs played the exact same setlist in the same order at The Rockpile on this night except that they omitted “Start @ One” and “Burn It Down.” There was one song that I wasn’t overly familiar with but I am going to assume that the song played after the sing along classic “Doesn’t Matter” was the track “Can’t Lose” from the Dwarfs‘ debut self-titled album. I am puzzled why the Killer Dwarfs don’t use a trick from Helix‘s playbook and simply completely switch the order of the songs played from time to time. “Doesn’t Matter” would be great as one of the encore songs. Not every set has to start with the double of “Comin’ Through” and “Hard Luck Town.” In any case, as soon as “Driftin’ Back” was played, I could pretty much tell you which song would be played next.

The one obviously very different part of the night was that there was the countdown to the New Year at the show. This was my first time attending an actual concert on New Year’s Eve. The whole countdown and celebration afterwards was kind of curtailed given that it was in the middle of the Dwarfs‘ set. Although I didn’t recognize many people that I actually knew, I did see Diemonds / new Exciter guitarist Daniel Dekay (whom I have met on quite a few occasions) so I did say hello to him and congratulated him on getting the gig with Exciter. Another pet peeve for me is that the Dwarfs always play such short sets. Nine songs before the encores is a pretty short set! It’s not like the Dwarfs play long songs to start with so the band’s entire set probably lasted an hour and ten minutes or so when all was said and done, and that included the New Year’s celebration. Overall, 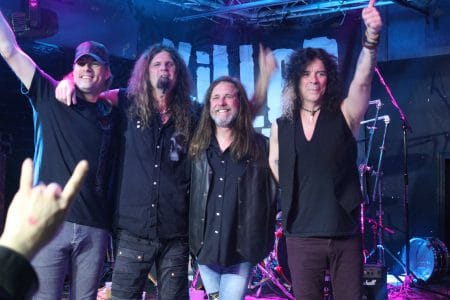 I definitely enjoyed the Dwarfs‘ set way more on this night compared to back in April 2018 but I wasn’t blown away either for the reasons outlined above.

The Killer Dwarfs at the Rockpile Dec. 31, 2018 in toronto ontario canada