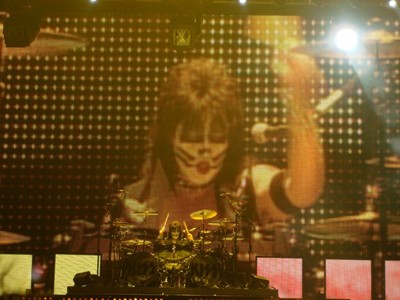 Woo! KISS time — and at the barn no less (a common name for the SECC), because nowhere else is big enough to hold the spectacle of KISS live. The last time they played in Glasgow, Scotland was at the Apollo Theatre (sadly knocked down) and that was a long, long time ago. For me, I’ve been waiting 20 years to see them again, the last time being at the Monsters of Rock Festival (Download can go and piss off as far as I’m concerned) at Donnington in 1988, where they had no make-up, and for a lack of a better word, they were shit. So my expectations were high for this due to the make-up and full on stage show… After all, I started listening to KISS when I was eleven and Deuce was my first song. 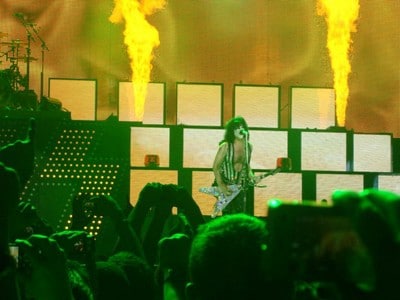 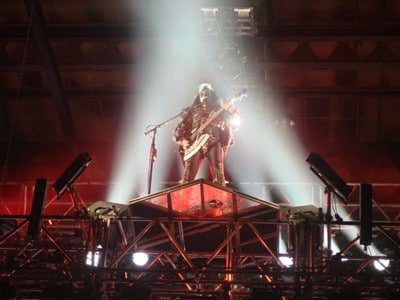 With me as usual, was my ‘Padawan learner’ in sleaze and rock n’ roll, Claire… who will eventually marry Paul Stanley. We get there 15 minutes before the doors were due to open and the usual ‘Motley Crue’ (get it?) were there — ticket scalpers, fans without, vendors and wanna be musicians. We ignored it all, got inside and I headed straight to one of the merchandise booths to get my Sonic Boom t-shirt, a beer and then into the venue — front and center, but not too close to the front as the usual idiots will pile forward, elbow you and block your view.

We wait for Taking Dawn to appear, this being the second time I have seen them as they opened for Airbourne at a previous show. This time they were better, no doubt about it, and apart from a few slips (the potty talk was gone, no doubt having been warned by KISS about their language), they got the crowd going just nicely. The place began to fill up and as Taking Dawn left and the mass of roadies rushed on to clear the stage and get the final checks done for KISS. 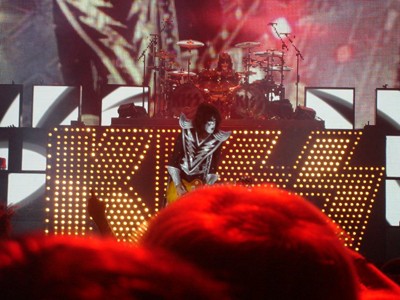 At 8:50PM the lights went off and the big screens started playing a video laced with clips from the Modern Day Delilah video. The curtain dropped, the pyros and lights went off, and Paul Stanley, Gene Simmons and Tommy Thayer were being lifted over Eric Singer‘s drum kit on a rotating platform as Modern Day Delilah got us going — the place erupted.

It wouldn’t do the gig justice to do a play by play, but between guitar solos, floating guitars, rising drum kits, fireworks, colored pyros, giant video screens, Gene Simmons spitting blood and flying into the rafters, Paul Stanley flying over and into the crowd and an encore that lasted 25 minutes, the entire show was spectacular. KISS were on stage for just over 2 hours, and for their age they never let their energy drop, nor did they disappoint. Paul Stanley and his stage-banter are the stuff of legend, and rightly so, as he had the audience in the palm of his hand.

I got a great set of photos, and video shot, of this concert which I uploaded onto Facebook — feel free to check it out.

If you have a chance to see KISS on this tour and haven’t seen them already, trust me, it’s worth every penny. 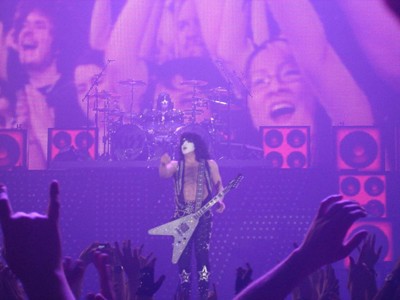 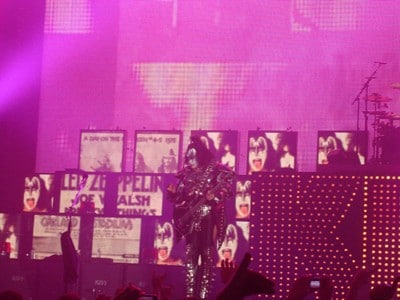