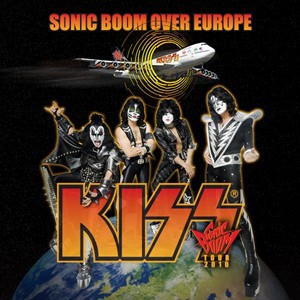 KISS ROCKS GLASGOW FOR THE FIRST TIME IN 18 YEARS

It had been 18 long years since KISS last visited Glasgow, Scotland. That was on the Revenge Tour, their last big outing before once again donning the face paint and stack heels on their reunion tour. Peter Criss and Ace Frehley have been and gone and three of the four members who played in 1992 were back. Guitarist Tommy Thayer being the only new boy in the ranks.

The SECC was packed to the rafters and it was great to see so many kids in the audience. The Kiss Army looks like it’s transcending into yet another generation of loyal followers.

Before KISS hit the stage, Taking Dawn had a chance to warm up a much larger crowd than their recent UK tour with Airbourne. Like on the Airbourne shows, their sound mix was terrible and all of their songs sounded much the same. I can’t believe that two headliners in a row tried to sabotage their sound — I think they need to shoot their sound man! You couldn’t fault the band for effort though. They covered every inch of the stage and frontman Chris Babbitt engaged well with the audience, but without any discernable songs it all seemed pretty pointless — sorry guys!

There were no such problems with KISS. We were treated to two and a half hours of pure entertainment in the way only KISS can deliver. There were explosions, ramps, blood spitting, fire breathing, flying to the rafters, flying over the crowd, rocket firing guitars and drummer Eric Singer even wielded a bazooka for Christ sake! The set list was irrelevant, all the classics were there and even Crazy, Crazy Nights got an airing for the first time in 20 odd years. There were also a smattering of songs from Sonic Boom — Modern Day Delilah, which opened the show, Say Yeah and I’m An Animal. Not the songs I would have chosen, but hey, it’s their album so they can play what they like from it right?

Gene Simmons and Paul Stanley continue to belay their advancing years and both still put 110% into the show. Paul‘s voice was a bit ragged early on but improved as the set wore on. Singer was as dependable as ever and it was great to see him let loose with his double bass drum kit again. Ex Black ‘N Blue man Tommy Thayer has the classic licks down pat but also breathes something new, vibrant and fresh into the songs. His interplay with Paul is particularly worthy of mention, as is his combined solo spot with Singer where he produced some surprisingly good bluesy fretwork — a nice change from the usual ‘widdlefest’ employed in most guitarist’s solo spots.

Who knows if KISS will make it back to Glasgow again, but one thing is for sure, they once again left a lasting impression as the SECC crowd filed out with the suitably over the top finale of Rock N Roll All Nite ringing in their ears. KISS came and KISS conquered — simple as that! No contest!