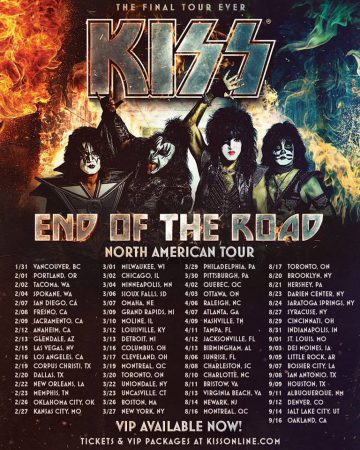 Round three! If someone would have told me that I would see KISS play live three times in the span of five months, I would have told them they were crazy but here I was going to see KISS for a third time in 2019 on their End of The Road World Tour. Interestingly enough, the only previous time that I had seen KISS multiple times on one of their tours was back in 2000 when the band was doing its “farewell” tour. That turned out to be a farewell tour only for the original KISS line-up of Paul Stanley, Gene Simmons, Ace Frehley and Peter Criss. Amazingly enough, Stanley and Simmons kept the KISS juggernaut going for an extra 20 years (in 2020) with two new studio albums — Sonic Boom (2009) and Monster (2012) — during that time span. Yes, it was a paltry number of studio albums in the last 20 years but at least KISS kept touring virtually year after year once they started up again in 2002. Having seen KISS already twice before on their End of The Road World Tour, I was excited to see them one more time (and one last final time) but definitely knew what to expect.

A few days prior to the concert, things weren’t looking good for my attendance since my babysitter was busy and my wife was working that evening. I even tried to sell my ticket (for less than the $160.50 Cdn that I had paid) but received no offers except one from my friend Chris who was willing to take it off my hands on a gratuitous basis. The night before the KISS concert, I followed up with my babysitter one more time only to find out that she was now available. Good times! Having seen the opening act / performance painter David Garibaldi “perform” in Sunrise, Florida the week before, I decided that once was enough so asked my babysitter to come for 8:00 pm which would give me plenty of time to get to the Scotiabank Arena for 9:00 pm when I expected KISS to go on. I was surprised to get a text from my friend Pierre who had accompanied me to see KISS in Sunrise, Florida inquiring if KISS were playing in Toronto on this night. Pierre, who was out of town, advised that if it had been any other night, he would have loved to go see KISS one more time. I hadn’t realized how much that Pierre enjoyed KISS‘ performance in Sunrise, Florida the week before but it certainly says something about KISS‘ concert that night that a mostly classic rock fan would want to see KISS perform a second time in two weeks and especially when that fan had not been to a concert in more than 20 years beforehand.

At 8:10 pm, with the babysitter still not there, I sent her a text only to find out that she was about half an hour away with a semi-decent excuse. Ugh. The estimate later turned to 8:55 pm, and I resigned myself to the fact that I would likely be missing the first few songs of the KISS concert. Only three times before had I missed any portion of an act that I was aiming to see. The first was in 2008 when I thought that AC/DC would start at 9:00 pm at the Rogers Centre in Toronto only to be horrified to see that they had actually started at around 8:30 pm. That was definitely disappointing. The next time was at the M3 Rock Festival in 2014 where my own directional issues resulted in me missing Winger‘s entire set and a portion of Lita Ford‘s set on Day One of the festival. The last time was in 2015 with Sleaze Roxx writer Eduardo when we stupidly thought that Halestorm would be headlining over Big Wreck and Three Days Grace at an outdoor concert in Toronto. We ended up missing the first act only to realize by the time that the real headliner (Three Days Grace) went on that Halestorm was that first act that we had missed! Now that was truly disappointing!

My babysitter ended up arriving at 8:40 pm and the race was on. Realistically, it could take me anywhere from 30 to 45 minutes to get to downtown Toronto, find parking and access the Scotiabank Arena. The key of course would be the traffic to get to the downtown area. Given that it was Saturday night, traffic going into downtown would likely be quite dense. I could have elected to take public transit with the fastest option being the GO Train but that would mean a ten minute drive to a GO Train station, a 13 minute ride and probably another 10 minutes to get off the train and make it to my seat inside the venue. Of course, the GO Train only passed every half an hour so who knows at what time that the next train would have been there. Accordingly, I ended up driving to downtown Toronto. Having worked in the downtown area for many years in the past, I at least knew which exit would have the least traffic and knew of a cheaper parking lot only a block and a half away from the venue and near the Gardiner Expressway. By the time that I arrived at the Scotiabank Arena, it seemed that I was walking into a ghost town. There were no line-ups to get in and the halls were virtually empty. I could hear some music blaring so assumed that the concert had already started. 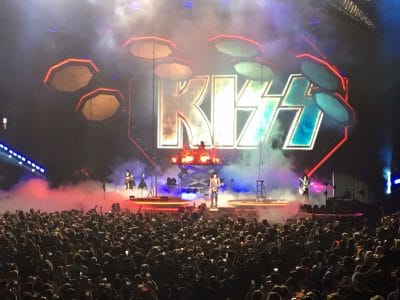 I eventually made my way into section 122. The place was absolutely packed with people. I was very pleased to see a large black curtain with the words “KISS” on them in front of the stage. I had somehow beat the clock and made it to the concert on time! Within seconds of getting to my seat, the familiar opening words, “You wanted the best. You got the best. The hottest band in the world — KISS” could be heard and the band made a spectacular entrance! Having previously seen KISS‘ End of the Road World Tour from the cheaper nose bleed sections the two previous times, it was really cool being in the lower section as I was really better able to appreciate the magnitude of KISS‘ stage show. Nikki Sixx‘s claim early on that KISS had somehow copied the stage set that Mötley Crüe utilized during their own last tour in 2015 was laughable. Sure, there were a few similarities like all of the band members hovering around a piano when each of the band’s “hit” ballad (“Beth” for KISS and “Home Sweet Home” for Mötley) was played but that was about it. I thought that the KISS stage looked a lot bigger, cleaner looking and more spectacular than the Mötley one.

Sadly, there were no changes in KISS‘ setlist from the week before and only one song change (the second encore “Do You Love Me” getting replaced by “Crazy Crazy Nights”) from the last time that they played in Toronto about five months prior. Given that KISS were playing the same venue in the same city five months later, I would have liked some additional changes to the setlist. Then again, it must be very difficult for KISS to change the setlist these days given that it highly seems that Paul Stanley is 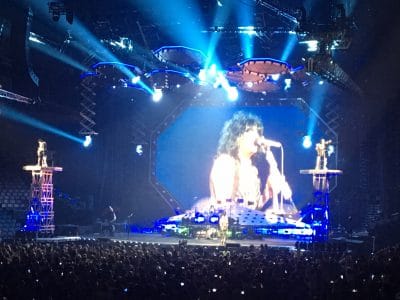 seemingly lip synching and using tracks for this last tour. Nothing in that regard has been confirmed and Stanley does appear to do an admirable job when it comes to lip synching. I suspect that Stanley‘s yells or “yodelling” between songs were real and his voice sounded quite a bit hoarse during those parts. His voice is definitely not what it was in his heyday. Like I have said in my prior reviews of the End of The Road World Tour, I don’t really care at this point. KISS have been playing live for over 45 years and if Stanley needs some tracks to get through the last tour, then so be it and he has earned it.

The atmosphere at the Scotiabank Arena was a good one and partly because part of my section was standing for the majority of the concert. There is nothing that I hate more than sitting at a concert. It just seems so anti-rock n’ roll. The week prior in Sunrise, Florida, everyone was sitting in my section (the cheaper seats) during the KISS concert so the atmosphere was definitely lacking somewhat. When I first saw KISS on their End of The Road World Tour in March, the entire audience was seemingly on its feet for the entire concert even though I was only one row from the very top. That was a great atmosphere and greatly contributed to 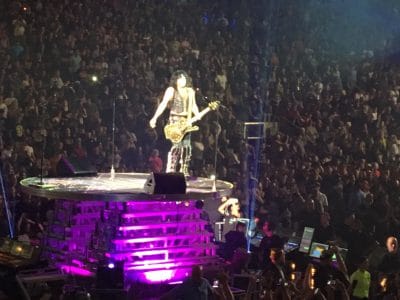 my enjoyment of that show despite my terrible and very far position from the stage. It seemed this time around that I was the middle man between the audience sitting and standing as the people in my section to my right were mostly standing during the concert while the people to my left were mostly sitting.

Given that this was my third time seeing KISS on their End of The Road World Tour, I felt a real sense of closure this time around. I think the two previous times, I was not ready to let them go (not seeing KISS perform live again) given that I knew that KISS would come around one more time to Toronto in August. This time, I knew that this would really be my last KISS show and I was alright with that. I enjoyed the trip down memory lane from seeing Gene Simmons breathe fire one more time in a live setting to seeing Paul Stanley fly over the audience one more time to a tiny stage in the back of the arena for “Love Gun” and “I Was Made For Loving You.” This would be my 13th and last time seeing KISS in concert, and I was at peace with myself in that regard. All I can say is thank you to KISS for putting on such great concerts and really revolutionizing what a concert experience should be like for a concert goer. When it comes to live shows from a visual perspective over the course of their music career, KISS truly have been the best. 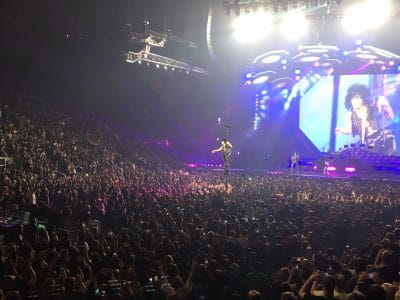 Highlights of KISS live at the Scotiabank Arena in Toronto, Ontario, Canada on August 17, 2019: