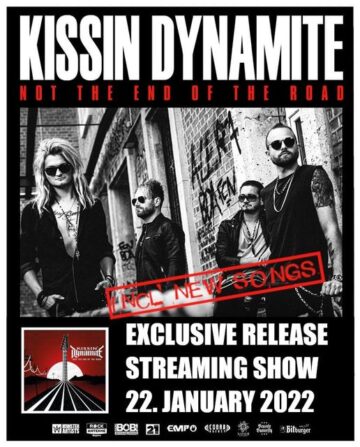 Talk about some bad luck. Kissin’ Dynamite‘s new album Not The End of The Road was first announced way back in mid-August 2021 with a release date of January 21, 2022. The German rockers were all set for their first release with Napalm Records. They had about five months to promote their new record and had lined up not one, not two, but three album release shows throughout Germany from January 20 to 22, 2022. The group had also released an impressive and whopping five videos / singles in advance of the release of Not The End of The Road. Everything seemed poised for an exciting lead up to release day with some obvious major touring plans in the works for after that day. Unfortunately, the Covid pandemic reared its ugly head again with its latest variant Omicron quickly spreading throughout the world in December 2021. Once again, large parts of the world started imposing further restrictions and Kissin’ Dynamite were forced to cancel their three album release shows.

Not to be denied, the German rockers elected to hold a live stream concert to celebrate the release of their new album Not The End of The Road. Having now not seen a live concert in almost two years and certainly getting tired of viewing “concerts” on a computer screen, at first, I wasn’t going to bother shelling out the 13 or 16 Euros or so to catch Kissin’ Dynamite‘s live stream show. My last paid live stream events dated back to KISS‘ New Year’s Eve in Dubai back on December 31, 2020 and Stephen Pearcy‘s live stream show at the Whisky A Go-Go in April 2021, where the Ratt frontman reunited briefly with drummer Bobby Blotzer. Actually, I shouldn’t say that because I did purchase a ticket to Stryper‘s live stream show where they were playing their album Soldiers Under Command in its entirety but truth be told, I 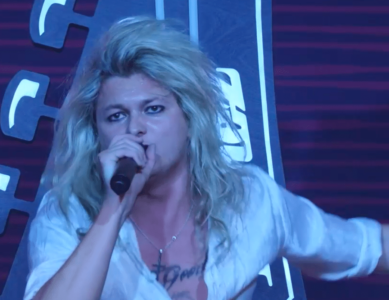 found the snippets that I saw pretty boring to watch and I have never viewed the whole thing yet. But the last live stream shows that I actually watched in its entirety dated back to Pearcy‘s in April of last year.

Although I had not planned on turning into Kissin’ Dynamite‘s live stream show when it was first announced, there is no question that their album Not The End of The Road was my most anticipated album release of 2022 on the strength of their sensational last studio album Ecstasy (which finished at #2 on the Sleaze Roxx’s Top Ten Albums of 2018) and the five good to excellent singles released in advance of the new record. In addition, one of my favorite live concerts to view is Kissin’ Dynamite‘s set at Summer Breeze Open Air festival in 2019. As seems to be the norm for live streams, there were some technical difficulties and the live stream was not working for at least one hour (through no fault of the band itself). I decided to do some other things for a few hours and by the time that I got back to checking out the live stream show, it was working just fine.

I was pleased to see that Kissin’ Dynamite‘s live stream was taking place on a fairly big stage with stairs leading to a higher level over where the drums were set up. As usual, four of the five band members — consisting of bassist Steffen Haile, guitarists Jim Müller and Ande Braun, and new drummer Sebastian Berg — were all dressed in black while frontman Hannes Braun wore a white shirt with black pants to set himself apart from the rest. The setlist was heavily favoured towards Kissin’ Dynamite‘s last two studio albums with five songs played from Ecstasy and five from Not The End of The Road. I had no complaints with that given that Ecstasy is such a great record and Not The End of The Road sounds very promising based on the first five videos / singles. Kissin’ Dynamite even played one song (“Only The Dead”) that had not been publicly released yet off Not The End of The Road and that track sounded fantastic on a first listen.

It really looked like the Kissin’ Dynamite band members were having a lot of fun playing their live stream show, which I think is important for the viewer at home. If the band members don’t seem into it, it’s hard to get excited watching such a show from a 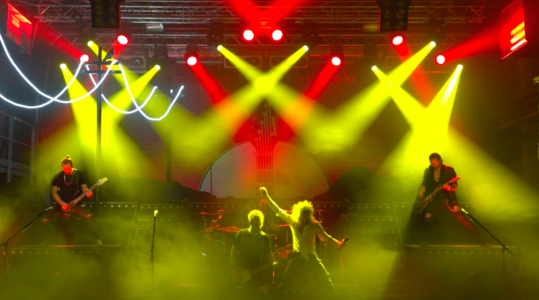 computer screen. Given the rather big production and stage set, there was a lot to look at and the band members made good use of the stage. Hannes Braun in particular always seemed to be in a new position or spot on the stage for each song. He donned a red cape and manipulated a sceptre for the track “I Will Be King”, and he waved a flag during the stellar song “Waging War.” Hannes addressed the crowd in both German and English as he noted that there were people from all around the world watching and not just from Germany, Switzerland and Austria.

As to be expected, Kissin’ Dynamite sounded great and Hannes Braun‘s vocals were right on point. The only thing that might have been a bit better were the backing vocals which seemed a bit low sounding. Nevertheless, overall, the sound was really good, the visuals were top notch and the songs themselves really rocked. I felt quite entertained while watching the live stream and actually viewed it a couple more times. Given the technical issues, the band apparently arranged with the live stream host Live 4 You to extend the viewing time for the live stream for a few more days. I think originally, the plan was that people could view the live stream show as many times as they wanted in a 24 hour time span but I can still view it on my computer at this time (I haven’t closed that window yet).

As I am writing this, my copy of Not The End of The Road has just arrived so the odds are good that this album will be monopolizing my CD player(s) for the foreseeable future. Overall, I thought that Kissin’ Dynamite‘s live stream show was money well spent and a great way to get pumped up for the band’s new album. I really hope to get the chance to see Kissin’ Dynamite live in person one day and I would say that at this point, they are #1 on my list of groups that I would like to see in a live setting. 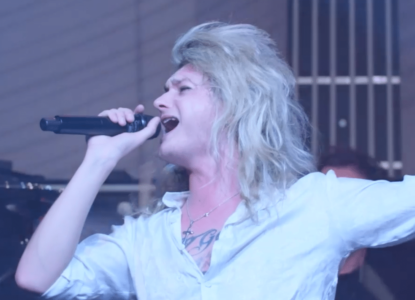