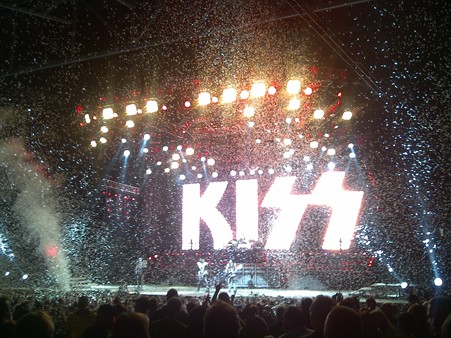 KISS VS MOTLEY CRUE: THE BATTLE OF HEAVYWEIGHTS

Some bands know who got them to where they are — KISS and Motley Crue are two of them. Setting aside their various egos, the two bands decided to “co-headline” THE TOUR of 2012 to give their fans the ultimate show, featuring two legitimate and viable headlining acts in one night.

Sure, the ticket prices were rather expensive, almost $150 for one ticket in the “200” section, but then again that ticket would have easily cost just under $100 if only one of these bands would have been there in concert. So technically, the $150 ticket price was a good deal for what I was getting!

By the time that I got to the concert venue at 7:15 pm or so, the place was packed which is no surprise since Motley Crue was likely going to be playing within 15 to 30 minutes. From what I understand, there was an opening act named The Treatment who will unfortunately receive no treatment in this review since I did not see any of that band’s show and I had never heard of them before until they landed the opening slot on this tour.

Motley Crue vs KISS. Which one is the better band? Which band would put up the best show? This debate raged among some fans, but everyone appeared to be happy just to see the two bands in one night. 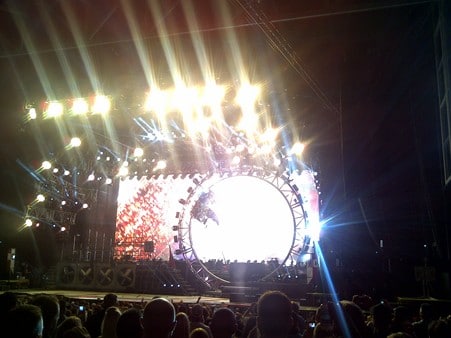 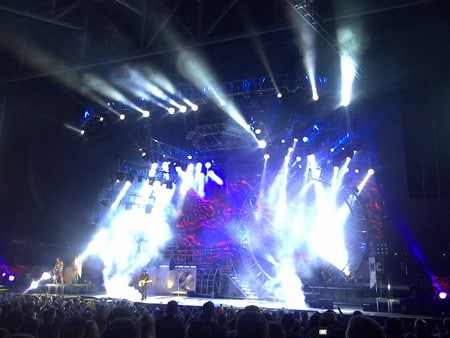 The evening started with frustration for some fans hoping to be in their seats in the “200” and “300” sections for the Motley Crue show. Motley Crue decided to make their entrance through the aisles between those seat sections which meant that pretty much no one was able to get into their seats until Motley Crue and their “entourage” or “cast members” (scantily clad women, various acrobats, etc.) made their way to the stage. This was made worse by having to hear some weird sound coming from the stage for about 10 minutes during which the audience got to see Motley Crue‘s stage show. It looked like something out of a carnival with four huge fans on one side, a big wheel (which would be used to spin Tommy Lee‘s drum kit around) on the other side, some “machine guns” on either side of the stage and generally no real cohesiveness whatsoever. The stage show looked chaotic. If that is what Motley Crue were after, they definitely achieved it. This was in sharp contrast to the ultra attractive and “professional” looking stage show offered by KISS later on.

I do admit that KISS has been one of my favorites, if not my favorite band of all time. The big difference between KISS and Motley Crue for me is that I will never miss a KISS show when they come to town while this was only my third time seeing Motley Crue after bypassing their concerts numerous times. One could say that I have actually never paid to see just Motley Crue in concert since I saw them with opening act Whitesnake back in 1987, got free tickets to their show in 2009 and this time, they were touring with one of my favorite bands. Nevertheless, I still love all of the early Motley Crue stuff up until ‘Dr. Feelgood’ and their ‘Saints Of Los Angeles’ CD is fantastic.

Opening with “Saints Of Los Angeles” and “Wild Side”, Motley Crue kicked off the evening (for me) in high gear. “Shout At The Devil” followed and kept the energy levels up with lead singer Vince Neil encouraging the packed crowd to sing along during each song’s chorus. But something was noticeably wrong with Vince Neil. Sure, he has packed on the weight since the Crue‘s earlier days but he was moving quite slowly like he had an anchor on one leg. Having seen the Crue play recently in 2009, I knew that Vince Neil could do a lot better than that. A closer look revealed that he was sporting some sort of cast which he later revealed was a KISS boot that was loaned to him. By the time Motley Crue‘s show was almost over, Vince Neil revealed that he had actually broken his foot! My hat goes off to him for performing with a broken foot. I can only imagine how sore his foot must have been after 90 minutes of hobbling rather rapidly about the stage. Hopefully, he was icing it or doing something for it during the many breaks that his bandmates were affording him between certain songs.

Hearing Motley Crue‘s newest song “Sex” for the first time was a real treat. That song rocks! However, at the end of the day, the fans would have likely been just as happy, if not happier, to hear one of the Crue‘s classics that were left off their set such as “Looks That Kill”. 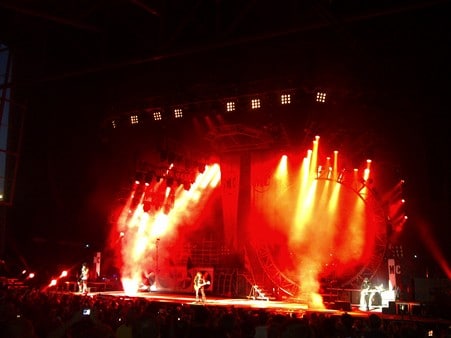 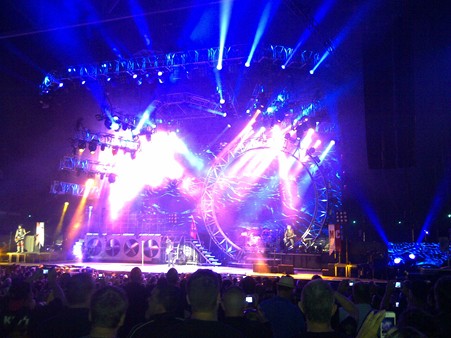 Motley Crue is one of the odd bands where the most charismatic band member is the drummer. By far, anything that drummer Tommy Lee had to say was lapped up by the audience. Tommy treated the fans to his ever changing, but always spectacular, drum solo where he and his drum kit took many spins inside a massive wheel. Even one lucky fan — I believe that her name was Charlene — got the ride of her life sitting next to Tommy while they went for a ride along the wheel. Hey Toronto — can I get a “Hell Yeah!” — can I get a “F**k Yeah!”. You bet Tommy!

Motley wrapped up the evening with the surprisingly always good in concert “Primal Scream”, the classic “Dr. Feelgood”, the made for the strip bars “Girls, Girls, Girls”, and show closer this time around “Kickstart My Heart”.

Shortly after, KISS made their entrance, luckily not from the aisles separating the seat sections, but from the rafters descending on a platform while playing the opening licks of the classic “Detroit Rock City”. KISS‘ stage show appeared much more simplistic than Motley Crue‘s stage set but also much more symmetrical and easy to look at. It was easy to focus on the band members, while during Motley Crue‘s set it seemed that there was no real focus on anyone given the multitude of dancers, water “machine gun” squirters, acrobats, etc. on the stage with the band. KISS had an impressive display of lights that worked well with each song. By the time that KISS got to their third song, the anthemic “I Love It Loud”, the fans were fully engaged singing along when prompted. One real treat for me was hearing the newest KISS song “Hell Or Hallelujah” (which has the same type of awesome riff as with “Modern Day Delilah”). It got even better when KISS tore into the classic “War Machine” from their very underrated and comeback to their heavy metal roots album ‘Creatures Of The Night’. Having previously only seen video footage of this song played while in makeup at the Rock In Rio festival back in the early 1980s, it was a real treat to hear and see “War Machine” live. Not surprisingly, a lot of the audience did not seem to know that song. 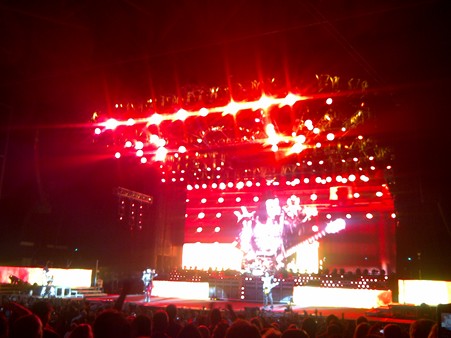 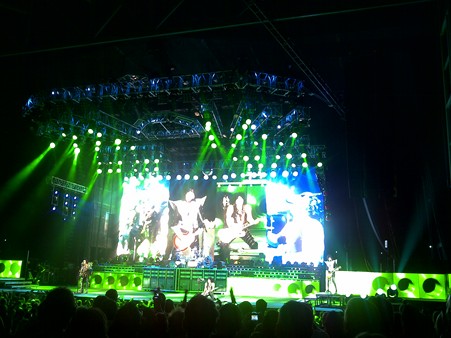 All or at least a good portion of the classics were played including “Shock Me” (which is still a little difficult to hear Tommy Thayer singing it instead of Ace Frehley), “God Of Thunder” (with Gene Simmons singing from up in the rafters), “Love Gun” (with Paul Stanley “flying” over the audience to a small platform for part of the song) and “Black Diamond” (amazing to think that this was off KISS‘ first album ever almost 40 years ago and it still rocks!). As expected, the fans were treated to all of KISS‘ stage tricks including Gene Simmons blowing fire and spitting blood, and Ace Frehley — I mean Tommy Thayer — firing “shots” from his guitar, only to be overshadowed later by Eric Singer with a bazooka!

The only thing that annoyed me from the KISS show was sometimes Paul Stanley‘s interaction with the audience which always seemed to start with “Good people…” There was a funny moment though when Paul was naming off some places that KISS had previously played at in Toronto including Maple Leaf Gardens. Apparently, either Tommy Thayer or Gene Simmons suggested mentioning “Varsity Stadium” or something like that, but that only brought a very meek response from the audience after being mentioned. Stanley then commented to Gene or Tommy something sarcastic along the lines “Thanks for that. That went over really well…”

KISS closed off their show with “Calling Dr. Love” and the classic “Rock And Roll All Nite”, complete with confetti and many fans dancing around in the audience.

Which was the better band? KISS or Motley Crue? To me, KISS provided the better show by far! That being said, many kudos have to go to Vince Neil for doing the Motley Crue show with a broken foot. 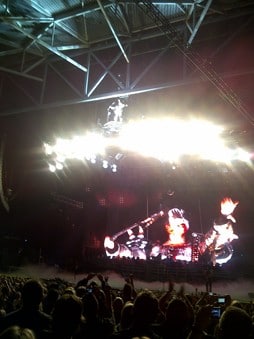