KIX ROCK THE FACE OFF ARIZONA FOR FIRST TIME IN YEARS

The older I get, the rarer it is that I see a band I’ve loved literally my whole life for the first time. A few years ago, I crossed Alice Cooper off my list on Mötley Crüe‘s The End tour. On Saturday night in Scottsdale, Arizona, I crossed off Kix from that very select list. 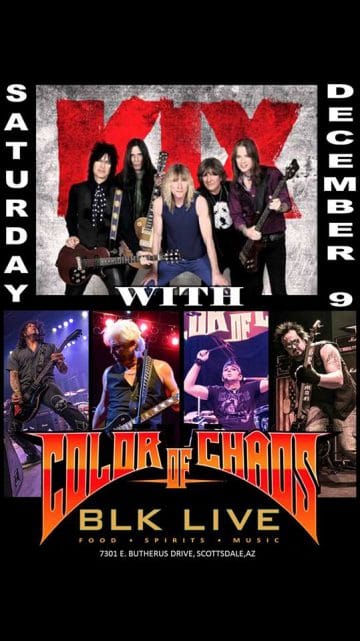 Speaking of Alice Cooper, it is very rare that there is anything worth going to see here in Arizona especially since the demise of KDKB, our long lasting rock station. That station was mismanaged so badly that it was tough to listen to but they still sponsored a lot of bands that would come to town. They’d never play their stuff on the radio, but still, they sponsored shows worth going to. So, they weren’t all bad. They’re dead now, though. And, for a good long while, there was virtually no shows worth going to. Yet, on December 9th, there were two! Alice Cooper‘s Christmas Pudding which returned after at least a year’s hiatus. That event took place at the Celebrity Theatre in Phoenix, Arizona with Slash, Rob Halford, and others making appearances. But, even with that stacked line-up, my money was on Kix. And, after the show, I’m convinced I made the right choice.

BLK Live is bucking the trend of having no good shows in town bringing in many great bands like Dokken fairly recently, Warrant last week, Kix this past Saturday, and a myriad of other bands upcoming including Stephen Pearcy and Bang Tango on New Year’s Eve. I have a feeling I will be spending quite a bit of time, and money, there in the near future. But, this was my first time at the venue and I had no idea what to expect.

I walked in during the set of Color of Chaos. This is a band that can be described as classic hard rock with obvious modern influences. I think it went over well with the Kix crowd. They closed with “Fortunate One” which sounded a lot like the version on the Dead Daisies album and a lot less like the original. Very powerful performance by a band with a lot of talent and a vocalist that has a little something unique about him. I hope they take this thing seriously because they might have something special here. I mean that. Very impressed with these guys.

So, BLK Live is a converted restaurant that happens to have a courtyard where the stage is. Inside there is a pool. Here is my luck. I look and see a still pool and think, “It is December, It must be covered over.” So, I end up knee deep in pool water when trying to walk around the crowd to get a better view of the pool. I am smart, people. I just can’t prove that with my actions. But, aside from a good laugh from those that saw it and my needing to ring out my socks after the show, no harm was done. I have to think that pool will come in handy if they are doing outdoor shows during the summer when it is a balmy 120 degrees outside.

Kix took the stage at about 9:15 and within a moment, I was already impressed. Steve Whiteman and the boys hit the stage with a vengeance. I don’t know what the guys eat or drink before hitting the stage, but whatever it is, especially whatever Steve has, I want some. I have ADHD and am often perpetually in motion. But, at my most energetic, I come nowhere close to the amount of infectious energy that radiates from this band as a whole. Unbelievable. I can’t express how impactful their energy is.

The band opened with “Hot Wire” followed by “Sex” and “Atomic Bombs.” After the third song, Steve said, “Thanks, goodnight!” He then started his performance on stage as one of the band members, I must admit I did not catch who, informed him that they “had problems” with the audio. Steve riffed about having problems while they worked on the fix. It was a genius fix and kept the crowd interested. And, yes, he did say that if you go in the pool in December, you have problems. Guilty!

As you can tell, the set list was very diverse. It included tracks from Rock Your Face Off as well as all the classic albums. One I was particualrly happy they performed, aside from “Wheels In Motion” as I think that is just such a heavy song for Kix and kicks so much ass, is “Get It While Its Hot.” I say that because it has not made it, that I recall, to recent live releases and I always include it in Kix compilations I put together for travel. Great song.

I really do not understand why this band is not a much bigger band than they are. They are INCREDIBLY tight and Steve has lost absolutely nothing on the vocals. And, if anything, became more of a performer as he’s aged. Just cannot express how good they really were on this night.

There was a little girl at the show who was there with her parents. The band took a shine to her and joked that the girl’s first concert was to see “The Kix Band with the Filthy Front Man.” They made the show extra special for those people and probably made a fan for life in doing so. As someone who had a like experience with my oldest at a Dokken show some eight years ago, I know what that is like. So, kudos to Steve, Brian, and the boys for giving back a little to their loyal fans.

I would have loved to have seen Kix‘s following night show at the Whiskey A Go Go in Hollywood. Steve calls it a “world famous dump.” I’ve been there. A dump it is. But, iconic, it also is. Won’t hear me insult the Whiskey. I love that place. All in all, I can cross a band off the list that I had never seen before live. But, I can assure you that if they come back to town, I will be there again. Unreal performance by a band that has always been a cut above even if they maybe haven’t always gotten credit for their contributions.