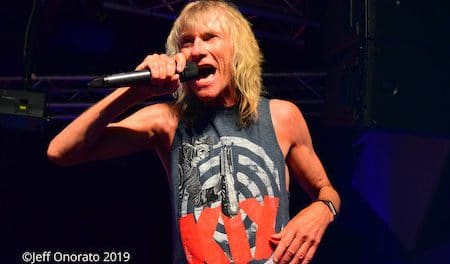 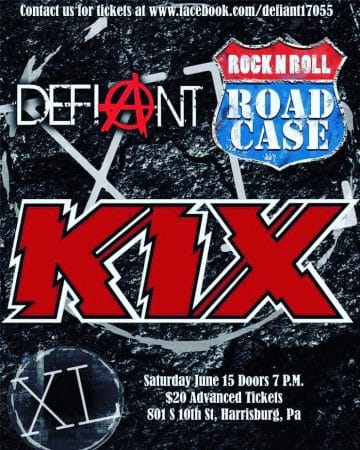 Seeing a rock n’ roll show in a small club is arguably the best place to catch a band. That of course depends on the artist, but for the most part I believe it to be true. This point was driven home for me when I caught Kix at XL Live on June 15th in Harrisburg, Pennsylvania. The veteran hard rock band has been a mainstay of the club circuit since its inception in the late seventies. Hailing from the Hagerstown, Maryland area, Kix were practically the house band at Baltimore’s legendary HammerJacks club for many years. That’s not to say Kix aren’t spectacular performing in front of larger crowds — they certainly are. This was evidenced by their electrifying M3 Rock Festival performance a little over a month ago. Their no-frills, explosive live show is a completely different animal when experienced in a compact, intimate setting though. Kix have seen a true resurgence in recent years, with repeat bookings at larger rock festivals and the Monsters of Rock Cruise. The band performs nationwide, but shows in the Maryland / Pennsylvania area are always huge draws and have a great turnout. Faithful fans show up in droves to catch their hometown boys anytime they play locally. The line to get into XL Live for this show formed very early, and when doors opened at 7:00 pm, it snaked around the building, towards the back of the club. Not the case with every band that comes to town. 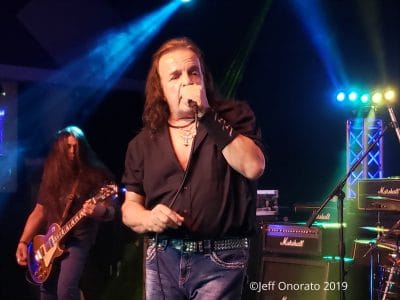 Openers Road Case were up to the plate first. Hailing from South-central Pennsylvania, the band pays tribute to the greats of the ’70s and ’80s — Aerosmith, Def Leppard, The Cult, Guns N’ Roses and The Black Crowes. This was my second time catching Road Case, and on both occasions they’ve been fantastic. Their passion for the music that they play really shines through, and they had the house fired-up from a dosing of classic rock. Ironically, Road Case covered Rhino Bucket’s “One More One Night Stand” in their set. I’m confident that their rendition of the song on this evening won the approval of Kix guitarist Brian “Damage” Forsythe, who was also a member of the now-defunct Rhino Bucket for many years. I don’t recall seeing anyone waiting idle in the wings after Road Case left the stage.

Mechanicsburg, Pennsylvania locals Defiant followed Road Case with a blistering set of punk-infused metal. I thought they sounded good, but their style of music was not an optimal pairing with the other bands on the bill. To their credit, they played very well and their set consisted entirely of original songs with the exception of one Misfits (Michael Graves era) cover. My favorite of those was “He’s Watching”, which opened with a crunchy guitar riff and had a Godsmack vibe. Defiant actually reminded me a lot of the band Nothingface. Their singer has that guttural growl vocal style in the vein of Coal Chamber’s Dez Fafara. I think that Defiant’s style of music, laced with double-bass drumming and down-tuned guitar work, would make them a perfect fit to open for a band like Sevendust or Devildriver down the line.

Like true champions, Kix came out of the gates strong with “Midnight Dynamite“ and “Lie Like a Rug” from their 1985 Midnight Dynamite album. It was all guns blazing as “No Ring Around Rosie” and “Get It While It’s Hot” followed suit. This pair were the 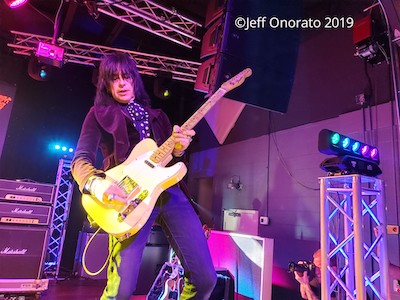 first of five songs that the band played from their landmark Blow My Fuse record. No complaints there. Perched high upon a riser at stage left (audience to the right), guitarist Brian “Damage” Forsythe towered above the audience as he broke into a bluesy guitar solo that was jaw-dropping before it eventually meandered into “The Itch.” Hearing the bass groove of that song live had me thinking. I really believe that Kix could not have found a better bassist with the addition of Mark Schenker to their ranks. He proved that theory for me with his brilliant playing on the song, which has such a prominent bass line. He also contributes background vocals, and his stage presence and songwriting style gel perfectly with the rest of the band. He co-wrote many of the songs on Rock Your Face Off.

One part Mick Jagger, another part Bon Scott, dynamo frontman Steve Whiteman is a master showman. He really is like the Dorian Gray of Rock and seemingly does not age. He still works the stage harder and faster than performers half his age all while holding the audience in the palm of his hand. This was apparent as he took time in between songs to jest and share anecdotes about the band’s history and music. Vocally, he’s still in top shape too, 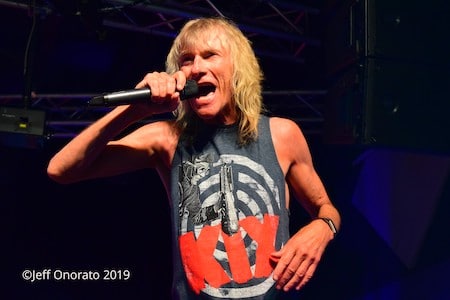 avoiding the common pitfall that many of his peers seem to be faced with. “Are you happy?” he asked of the audience before making that point loud and clear with his banshee-like wail on the opening of “Girl Money.” Whiteman recollected playing Harrisburg in years prior at the Metron and “the place across the bridge” (City Island) before breaking out his acoustic guitar for a song that they play exclusively in Harrisburg — “For Shame.” I confess that I did not know Steve Whiteman is also a guitarist, so this was a real treat to hear him play the song acoustically. Their Cool Kids album was also represented by “Mighty Mouth” and Steve joked that those two songs were “two too many”.

“Love Me With Your Top Down” was up next and was the only song that the band played from 2014’s Rock Your Face Off.  As the keyboard intro for “Don’t Close Your Eyes” started, Steve Whiteman donned his red sunglasses that he famously wore in the video for the anti-suicide track many years ago. It remains a fan-favorite to this day. It’s a signature song for them, so logically they almost always play it at their shows. It’s also just a nice change of pace to hear them switch gears in an otherwise rapid-fire set. I think it might be cool if they added “Tear Down the 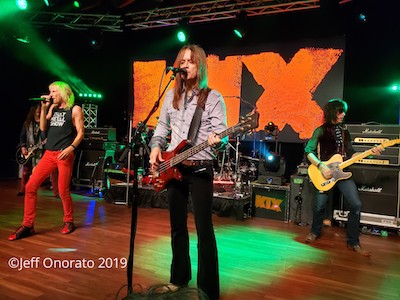 Walls” into their show at some point. I was thrilled to see Hotwire represented in the show again that evening via ““Same Jane.” I’ve always felt Hotwire was a great follow up to Blow My Fuse and didn’t get the recognition that it deserved.

The guitar duo of Ronnie “10/10” Younkins and Brian “Damage” Forsythe are an absolute force to be reckoned with. Trading off the spotlight throughout the show, their opposing styles align perfectly in what could be described as a blues-soaked electrical storm. They really are THAT good. Seeing Younkins and Forsythe bounce riffs off of one another is like watching a racquetball tournament. Just when you think it can’t get any more intense, they up the stakes and counter with fretwork that’s even more dizzying and urgent. Both guitarists had their moment in the spotlight that night, and Ronnie’s came next as he delivered a punishing guitar solo that eventually segued into “Cold Blood.”

Drummer Jimmy Chalfant may not be the flashiest player in the business, but he more than makes up for that with rock-solid performances. He has the chops of a true pro, as demonstrated in his drum solo that followed. He looked cool behind his red, neon-rimmed drum kit in dark sunglasses, a red shirt and black tie. I would liken his style more to Tesla’s Troy Luccketta or Joey Kramer of Aerosmith over some of the more over-the-top drummers on the scene today. He just drums at full velocity 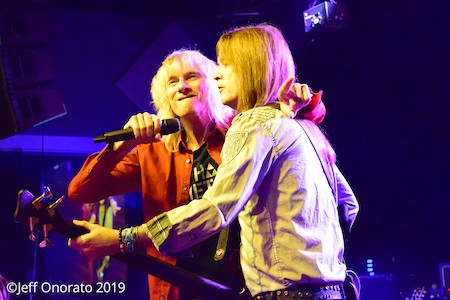 and keeps things rolling for the other players to work their magic off of. The teaming of Chalfant on drums and bassist Mark Schenker combine into a locomotive of a rhythm section. Chalfant’s drum solo led the way into “Blow My Fuse” before Steve playfully advised that they will only play “one encore.” Kix capped off their rollicking performance with “Yeah, Yeah, Yeah” before releasing a flurry of huge balloons into the club that resulted in an impromptu volleyball game between the band and the audience.

With seven studio albums to their credit, there are so many great songs in the Kix catalog that are regarded as “classics” and absolutely must be included in the set or the crowd will riot. Not necessarily “chart toppers” per say, but songs that have become near and dear to fans over the years. I’d personally like to see the band throw in a track from their 1995 Show Business album.  “911” would make a great addition and stand up well alongside their hits. It’s a lesser-known track, but I’ll keep my fingers crossed that Kix will add into their set at some point.  Kix are a top-shelf live band that always deliver. Don’t miss the guys if they come to your town! 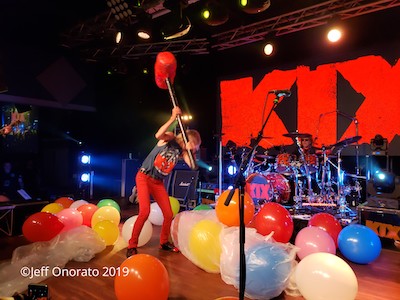 TRIVIA QUESTION: What band released their debut album on Atlantic Records in 1989 and featured a former member of Kix? Hint: The answer is NOT Rhino Bucket.