The scene opens as I take my first step up onto the tour bus….

Phil Lewis, legendary singer of L.A. Guns is standing inside, at the end of the bus, leaned back, one leg crossed over the other, wearing snake skin pants and a sleeveless shirt. He looks up, opens his arms smiles and says (like only Phil Lewis can, with his distinctive voice and accent), “Chrrrrrris Carrrrrrroll”! Just hearing him say it that way made me smile. He approached, arms extended. Phil must be one of the most gracious rock stars I’ve ever met. He is always super friendly and accommodating. After exchanging pleasantries, he pointed me to the right, just six inches away, and said, “I’d like you to meet Tracii Guns”. Tracii was seated on the sofa, leaning forward and had the same look on his face as a high school rock fan arriving at his first concert. Eager eyes and a big smile on his face, he greeted me, he talked a little then cracked a joke. Wow…. These two honestly seemed excited to be together. This wasn’t the show, onstage, where band members play the role. This was in private and both their faces were lit up with genuine smiles. I knew this was going to be a great show.

I later mentioned how I was impressed that they seemed so happy and Phil told me that Tracii describes the situation as “Comfortable as an old pair of shoes”. Phil then said, “Tracii has always inspired me to give my very best and I truly believe we are like many of the classic duo’s… Jagger/Richards, Townsend/Daltry, Tyler/Perry” and I agree with him 100%. The chemistry these two have onstage is hard to ignore. Phil went on to say, “We’ve got some serious black magic going on between us. It’s hard to explain but I’ve never felt it working with anyone else”. I have to agree with that as well! Phil let me listen to a couple of the songs off their upcoming album and there is no denying the synergy between them. The marriage of Tracii’s guitar and Phil’s voice just creates a blend that is incomparable. 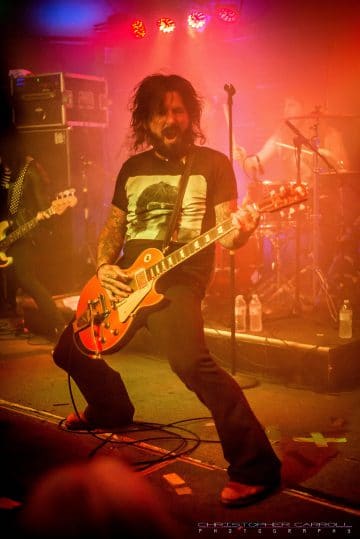 Inside the venue, the place was packed! They entered to a recording of “Diary Of A Madman.” Tracii came out, all smiles, and stomped right into “Hollywood Tease.” Phil, now dressed from head to toe in a brown and black snakeskin suit, ripped the mic off the stand and took charge of the vocals with a calm confidence that lets you know this was going to be a great performance. The entire band was extremely cohesive. There wasn’t a bit of rust on any of these guys. Phil and Tracii met at his mic for the first chorus and just laughed while they were singing it, face to face. It was these intricacies throughout the night that made the audience feel more like they were involved in the show as opposed to just there to watch it.

They spent the evening having a ball. They played great song after great song and the audience didn’t back down either. They seemed at the edge of their seats, ripe for whatever was coming next. In addition to the band playing their hits, they clearly put some time into planning changes and interludes. Tracii even whipped out a bow at one point. “Sex Action” ended with an interesting nod to the Rolling Stones. They found a way to make every song seem new and fresh.

Tracii Guns is a star. His guitar sound is distinct and it’s really the meat of the songs. He starts playing a riff and you know that song immediately. One might assume he wouldn’t be anxious to allow someone else to share that spotlight with him but, onstage, he was extremely welcoming to Michael Grant playing along with him in songs like “Over The Edge.” When the solo came up, he and Michael met in the middle of the stage, Tracii (still smiling), was slightly behind and leaning his head over Grant’s shoulder, talking in his ear and laughing while Michael leaned back resting his body onto Tracii…. as they both played the solo. 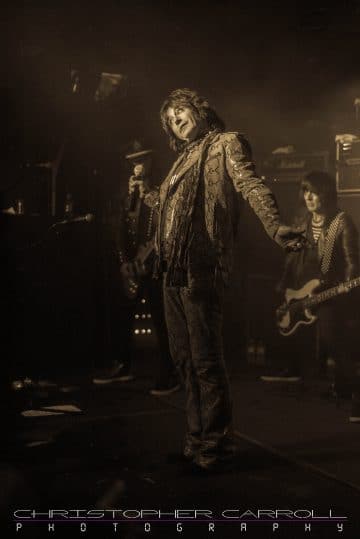 Michael Grant took his turn to shine during a Zeppelinesque prelude to the “The Ballad of Jayne.” He took the center stage, peeled off a beautiful 90 second solo then stepped aside while Tracii took his place and continued the instrumental, solo’d a bit, himself then finally broke into “The Ballad of Jayne.” This has always been a crowd favorite and tonight was no different. Phil didn’t have to persuade the crowd to join in. Everyone was already singing! He stopped a couple of times just to listen and shake his head in approval.

Phil has a purposely strained and raspy voice. The kind you are used to hearing on an album but not live. Most singers can’t handle singing that way for very long but Phil Lewis somehow does it. He never hides from a note! He belts it out full blast the entire night and sounds great the whole time.

These guys were having such a great time playing onstage I wondered if they forgot that this concert was for us and not just them! This kind of attitude is one that pulls the audience in. Twice, Phil plucked cell phones from the hands of fans who were recording “Rip And Tear” and proceeded to walk around, in ‘rock star cam’ mode, recording the band from a rock star’s point of view, ending one with a selfie and a finger in the cheek grin.

Both, bassist Johnny Martin and drummer Shane Fitzgibbon were working hard all night as well. They didn’t appear to slow down for a second, pounding out a booming foundation that energized the rest of the band. The show was intense and the sound was really good. Song after song, the band made sure the crowd stayed locked in with them every step of the way. Each song seemed like it was the hit single the crowd had been waiting for, with the audience getting excited all over again as soon as it started. 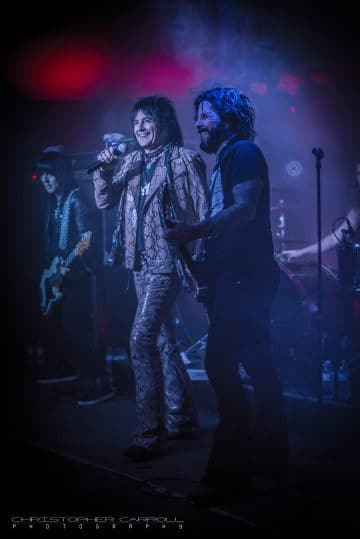 L.A. Guns have been, and are currently, on their Reloaded 2017 tour since January. Between now and May, they will hit Canada, Italy, Las Vegas, Japan and California… and they’re having such a good time, I wouldn’t be surprised if they added many more dates to the tour. You can get tour info on their Facebook page.

L.A. Guns playing “The Ballad Of Jayne” and “Rip And Tear” live at Fish Head Cantina in Halethorpe, Maryland, USA on April 21, 2017: