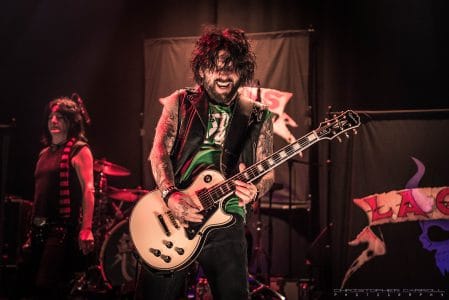 On this tour, L.A. Guns came back to the east coast. While Baltimore is closer to me and that’s where many of my friends would be seeing them, I chose to make the two hour drive to Hopewell, Virginia for the simple reason that the lighting at the Beacon is great and I’d finally get to shoot photos of L.A. Guns’ live show and get photos that I would be happy with! Of course, I went to the Baltimore show, as well, just for fun. 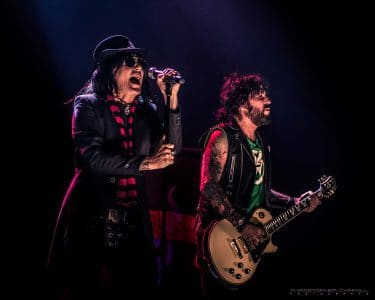 I said it last tour and the statement still stands. These guys are full of a new energy that radiates from the stage. Their first tour since their reuniting, Phil Lewis invited me onto the bus and introduced me to Tracii Guns who was smiling the entire time I was there. Phil was smiling and joking as well. The atmosphere was one of love, mutual respect for one another and excitement and that mood is still present to this day. These two are genuinely enjoying playing together, writing together and steering L.A. Guns on a course that they define and it has paid off. Since the reuniting of Phil and Tracii, they have released two impactful  albums (The Missing Peace and The Devil You Know) that nearly every critic agrees are fresh and exciting. Between those two  albums, they even took the time to put out a record that captures the live energy of the band — Made In Milan.

This is the opening song of the LA Guns show in Hopewell, VA at The Beacon Theater on April 18th 2019. 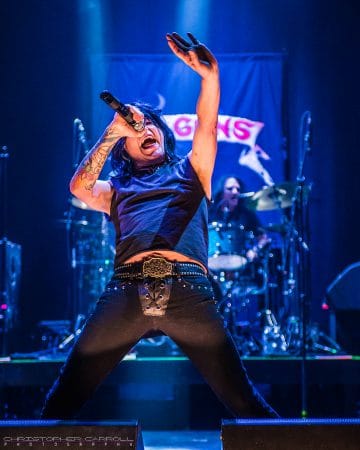 The second they take the stage, you can feel the energy of this band. You can see the confidence on Phil Lewis’ face and you can tell that each one of them is truly enjoying themselves. Phil’s voice actually sounds even better today than it ever has. He doesn’t shy away from the high notes. As a matter of fact, not only does the new record have him singing higher than he has before, live, he often takes liberties with some songs and belts out even higher notes. It’s a proven fact that, physically, a man’s vocal range decreases with age so I’m not quite sure how Phil Lewis is pulling this off but I am amazed that he is.

Tracii Guns is a true guitarist. When his pick hits the strings, everyone knows it’s Tracii. His definitive guitar sound, riffs and chord choices create a sound that is identifiable. It’s actually exciting for us, in the audience when he tears into things like the initial riff in “Electric Gypsy”! We experience that ‘stomach dropping’ feel that we get on a roller coaster. Watching him play, you know that Tracii actually feels these songs! They are so much a part of him that you don’t see him posing, you see him playing and those ‘poses’ just seem to take their shape around him. He and Phil end up sharing a mic quite often with Tracii singing a harmony or a background vocal between Phil’s lead vocal lines. It’s fun to watch the interaction between these two.

L.A. Guns performing “The Flood’s The Fault of The Rain” live at Beacon Theatre in Hopewell, Virginia, USA on April 18, 2019:

This is LA Guns playing The Flood Fault of the Rain in Hopewell, VA at The Beacon Theater on April 18th, 2019.

This is actually my favorite incarnation of L.A. Guns. I’m normally one who generally tends to appreciate the classic line-up of a band but for me, the current members add much more than that version of the band. They’re fun to watch as they’re all not only 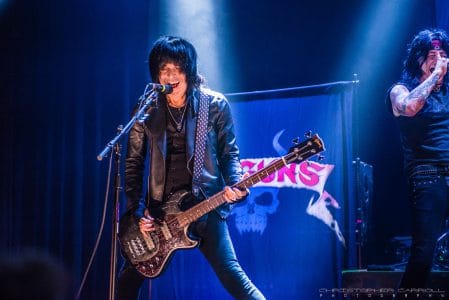 great players but have unique personalities that play perfectly into the band. One might think that when Phil Lewis and Tracii Guns, the two chief members of an iconic band, are in the spotlight, they would want members who would lay low or stay in the background but these guys picked musicians with big personalities! Johnny Martin just cracks me up when I’m watching him onstage. I know that he has an insane sense of humor and it seems to come across onstage as well. Always playing his parts perfectly, he never spends a boring second onstage. He’s hamming it up, singing background or striking cool poses.

Ace Von Johnson does as well. He has his own style, his own moves and he doesn’t hold back onstage. He and Tracii share a solo in the middle of the stage. During this, Ace doesn’t cower behind Tracii, he is right up there, doing his trademark backbend while he and Tracii are trading off guitar licks. Ace is identifiable and entertaining and it’s refreshing that names as big as Phil and Tracii would choose a great player who is so identifiable to be a part of the band, when the egos of most in their position

would prevent them from doing so! Scot Coogan, fresh from Ace Frehley’s band, is a great addition. Some may even know him from when Tracii played with him in Brides of Destruction. Of course, he’s a great drummer but has a great voice as well. In Ace Frehley’s band, Scot would handle the lead vocals on several songs! He has only been with the band for about three weeks but he is totally up to speed, not missing a move. Everyone in this band sings background vocals, which for L.A. Guns songs, is great as there are so many ‘sing along’ choruses.

If you haven’t seen these guys in years, it’s time to come back!  They sound amazing live and their latest album, The Devil You Know, is a must have record! Just the first two songs on the album, “Rage” and “Stay Away” are enough to convince you to buy the record. As a fan of bands in the ’80s era, it’s so refreshing to see that a band can come out with new music that is great and relevant. That’s pretty uncommon unfortunately but L.A. Guns seem to have it down.

L.A. Guns still have several shows left on this tour so visit the band’s website or Facebook page for dates near you. 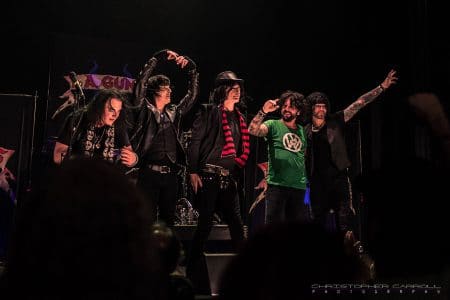 This is LA Guns playing Never Enough in Hopewell, VA at The Beacon Theater on April 18th, 2019.

This is the last song of LA Guns show in Hopewell, VA at The Beacon Theater on April 18th, 2019.