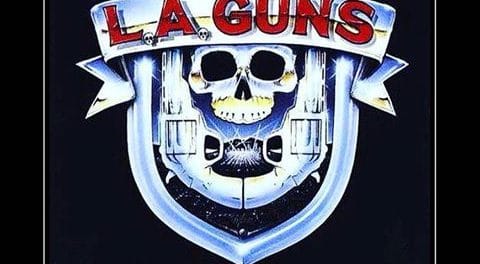 With a whole decade in the making, the partnership of Phil Lewis and Tracii Guns is once again together cocked and loaded to take the world, or the UK for now, by storm. Not only is this a big deal for the rekindling of the friendship of the duo, but it’s also been announced that a new record is in the making, the first since L.A. Guns’ last studio album Hollywood Forever (2012) and more importantly, the duo’s last L.A. Guns’ studio album together — Waking The Dead — which dates back to 2002. The string of UK dates highlight LA veterans L.A. Guns’ return to the stage in a big way as many of the venues on the tour have increased in capacity since their last visit to the UK shore back in 2016 and Tracii’s in 2015, with a slightly altered line-up in tow. 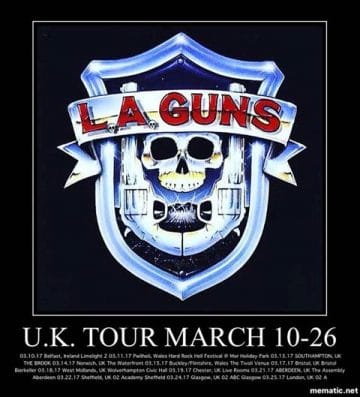 Appearing on stage in union, fully clad in black and leather clothing, this was visual reassurance that THIS is the L.A. Guns people have been waiting for. Wasting no tim,e the band unleashed into a couple of up tempo, adrenaline pumping, dirty rock n’ roll tracks, which became ingrained into their foundations for years to come. “No Mercy” certainly was a perfectly suited track to open the proceedings, given that inevitably there would be sceptics in attendance. The brash energetic performance of that track alone was evidence that the Hollywood Vampires were back!

The setlist, largely consisting of tracks paying homage to L.A. Guns‘ debut album, offered up some versatility with the inclusion of the “really fucking heavy” “Killing Machine” employing a sound more akin to thrash metal and a cut from 2002’s Waking The Dead album. One thing that was apparent throughout the night is that this was collectively a band in unison, all egos being absent, with everyone getting equal share of the spotlight. On many occasions, Tracii Guns and Phil Lewis shared the same mic and link arms, emphasising that maybe there is a future for the real L.A. Guns after all? Any doubts that the band was simply going through the motions with disinterest were abolished. Lewis — one of the poster boys who helped spearhead the glam metal movement in the 1980s proved exactly why L.A. Guns are still on the map. Lewis’ vocals have always been instrumental with his distinctive English accent setting him apart from his peers, coupled with the sheer rawness and elevating power behind it. “Never Enough” and ‘Kiss My Love Goodbye” — the two peaks of the set showed Lewis’ impressive vocal capabilities even decades after the hedonistic LA years.

Taking moments to engage and interact with the crowd, reaching out to high five audience members and between song small talk, L.A. Guns were certainly, performance-wise, at their peak and seemed grateful for the long time support. Rounded out by long standing guitarist Michael Grant alongside recent additions Shane Fitzgibbon and Johnny Martin, respectively on drums and bass, there’s a new lease of life for the band and it shows. After a near perfect rendition of “Malaria,” the band left the stage, to return with Tracii Guns teasing the audience with an instrumental medley of “Ain’t Talkin’ Bout Love” and “Balls To The Walls.”

In traditional fashion, the remaining culminating trio of tracks were the ones that really put the band on the map globally. “Never Enough” begins the means to an end; orchestrated by Guns’ opening riff packed with soaring guitars; wailing, coarse but pristine vocals; and thundering drums, leading onto a guitar solo duel between Grant and Guns, soon to be joined by a full band jam minus Lewis. L.A. Guns‘ highest chart 1990 hit ‘Ballad Of Jayne’, raised the roof. With a collaborative effort from both band and audience, proving this down n’ dirty band has more dimensions than meets the eye. Finishing the blindingly, remarkable set was “Rip And Tear” — a track that has all the ingredients for a fine broth, pulling out all the stops, ensuring the audience is left with nothing but a good time and great taste in their mouths.

“L.A. Guns! L.A. Guns!” resonated throughout the venue once the band joined arms and gave a farewell bow.