LADY BEAST ARE RAZOR SHARP WITH THEIR HEAVY METAL DELIVERY 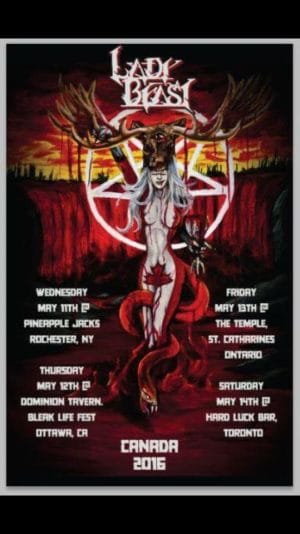 When my friend The Meister tipped me off that Lady Beast would be doing some tour dates in Canada including the city of Toronto in May 2016, I was very excited until I realized that none of the dates would work for me! I was unavailable during the first two nights of Lady Beast‘s three date tour of the province of Ontario in Canada and was scheduled to go camping on the third night. Luckily for me, my camping plans fell by the wayside and I was now available to catch Lady Beast play at the Hard Luck Bar in Toronto.

I can’t recall ever getting to a venue before the doors actually opened but this is what occurred on this night. Lady Beast were admittedly the only band that I really wanted to see and hear of the four band bill being offered by the Hard Luck Bar. No offence to Shotgun Cure, Flying Fortress and Mokomokai but unfortunately, I had never heard of one of them (although the name Shotgun Cure seemed to ring a bell — maybe due to their similar name to Shotgun Messiah) and being pressed for time, the chances were that I would not stay the entire evening at the Hard Luck Bar. In the days leading to the show, I learned from Lady Beast that they would be the first or second band on the bill. On the day of the gig, they advised they were first up so their start time was 9:00 pm. The doors at the Hard Luck Bar were scheduled to open at 9:00 pm so not wanting to miss one song from Lady Beast, I arrived about 10 to 15 minutes beforehand. To my surprise, there was no one manning the doors so I was able to walk into the Hard Luck Bar only to find the venue virtually empty aside from a few staff and band members.

I did spot Lady Beast‘s frontwoman Deborah Levine who greeted me with a big smile and hug. While I sometimes feel like I “know” a lot of the band members from seeing their photos all the time via the internet, the reality is that I had only met Levine once in person and certainly do not have the same public profile as a singer in a band. After a brief and friendly chat with Levine who jokingly pointed out that we were wearing the same Lady Beast t-shirt, and with the Hard Luck Bar still virtually empty, I started getting worried that hardly anyone would show up to watch Lady Beast who were the first band to open the festivities on this night. I texted my friend The Meister from “rival” website Decibel Geek (you can read his review of the show here) as I was surprised that he had yet to get to the venue considering what a big fan he is with respect to the band. The Meister did respond but advised that he was unable to get inside the venue. I replied that I had just walked in but The Meister clarified that the door man was not letting anyone inside since the doors had yet to open. I finally realized that in my haste to get to the venue early not to miss Lady Beast’s set, I had arrived so early that I beat the door man to the entrance! 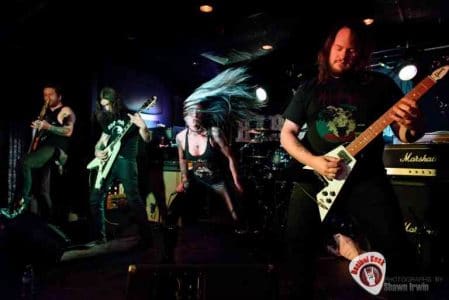 As it turns out, I was treated to Lady Beast performing a cool but brief soundcheck on this night. For a few seconds, I had wondered whether that was going to be the actual set but as soon as I saw Levine stationery while singing and having seen Lady Beast perform just a year ago at the M-Pre Party in Columbia, Maryland, USA, I realized that it was indeed the soundcheck. If I recall correctly, Lady Beast played a good chunk of “Heavy Metal Destiny” before asking for adjustments at least for Levine’s vocals, which were clearly getting overpowered by the instruments during soundcheck.

After Lady Beast’s soundcheck, The Meister and Decibel Geek photographer Shawn “Animalize” Irwin (don’t ask me how they come up with their names although it should be pretty easy to make an educated guess for Irwin‘s nickname) arrived inside the venue and we quickly chatted with Levine before chatting for a long time with the very tall Lady Beast bassist Greg Colaizzi. We had a fun chat about Irwin’s creative but expensive plan to get his wife to endorse him going to the Sweden Festival next month; Colaizzi’s participation as one of the organizers of the annual Skull Fest in Pennsylvania, USA; and, how the Lady Beast name was also apparently being used by a cohort of female bodybuilders. Before long, it was time for Lady Beast to start the festivities for the night. Although the venue was far from packed (to be expected for the first band of the night), I was glad to see quite a few people surrounding the stage once Lady Beast began playing with more making their way towards the stage as Lady Beast tore through their seven-song set in impressive fashion. 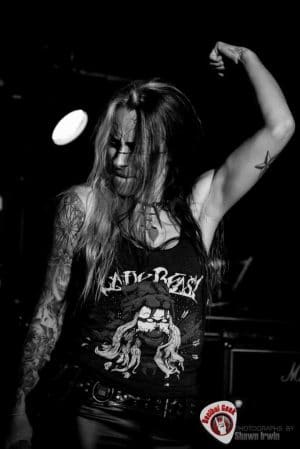 Starting off with the song bearing their name from their self-titled album released back in 2011, Lady Beast instantly meant business. It was impressive how tight that the band sounded from drummer Andy Ramage pounding on the drums to the Steve Harris like bass playing from Colaizzi to the twin guitar attack of Christopher Tritschler and newcomer Andy Ramage. Funny enough, when I had first seen Lady Beast play more than a year ago, Andy Ramage was playing the bass filling in for Colaizzi who was back home while his wife was expecting to deliver their first child at anytime. This time around, Andy Ramage was now a full-time member of the group but as its lead guitarist. Clearly, the man is quite talented as he sounded awesome tearing through the songs’ various guitar solos on this night.

Next up was the track “We Are Witches” from Lady Beast’s sophomore album Lady Beast II. If you haven’t heard the album yet and you like the classic era of New Wave Of British Heavy Metal music, you will and should simply love Lady Beast II. That album did land the number five spot on Sleaze Roxx’s Top Ten Albums of 2015 and I gave it a rave review back in July 2015.

Now, I am not a big fan of bands playing unreleased new songs at gigs, especially when I don’t get to see them play live very often and the group is limited to only seven songs such as Lady Beast on this night but I got to say that the trio of unreleased new songs played by Lady Beast has me very excited for the release of their four-song EP (hopefully sooner rather than later). I had heard “Devil’s Due” — the first of three new tracks – before when Lady Beast’s entire set from a past gig was posted on YouTube. It’s hard to remember at this point exactly how each of the three new songs – “The Ripper” (just a working title), “Devil’s Due” and “Lady Of The Battle” – sounded aside that they all rocked, had some awesome guitar parts and solos, and I can’t wait to hear the completed EP. Levine even told The Meister and I that she would forward the finished tracks to us (for review purposes) so both of us are definitely waiting impatiently for that to happen! 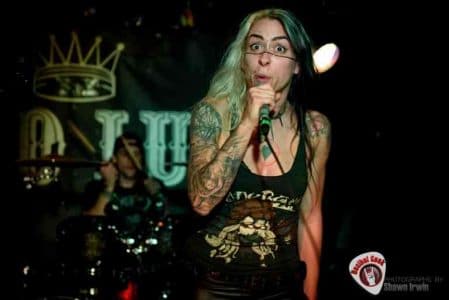 After the trio of new songs, “Caged Fury” from the Lady Beast II album was next and that track has tons of different tempos to it and absolutely rocks. Closing off a way too short but powerful set was the classic song “Heavy Metal Destiny” which I consider to be one of the great metal anthems written in the last five to ten years. I would be remiss if I did not mention Levine’s awesome performance. Her big smile, headbanging with all her colorful hair flying all over the place, panther like movements, and fantastic and powerful voice made her the focal point of Lady Beast’s performance and she simply killed it. While many people seem to think that heavy metal is not an uplifting form of music, it was nice to hear Levine dedicate the song “Caged Fury” to everyone in the audience on the basis that each individual can make a big difference if they choose to (or something like that).

Overall, Lady Beast put on a killer performance and I was very happy that they made the trek to Toronto. Perhaps I will return the favour in the future (I am sure that The Meister would be up for it) and do a road trip to Lady Beast’s hometown of Pittsburgh in the US (about five hours away from Toronto) because I don’t think that I can wait another year again to see one of my favorite bands play live again. I want to thank Irwin for bailing me out with three of his more than 400 photos taken of Lady Beast on this night. I had a laptop “crash” a few days after the show and although I recovered most of my photos (I am so happy that I back up my computer files on a regular basis), the ones that I took of Lady Beast were apparently not backed up in time. Accordingly, the photos for this review are courtesy of one of the “rival” website Decibel Geek‘s photographers. I also want to thank The Meister for his video of Lady Beast playing “Heavy Metal Destiny!”