FREE OUTDOOR SHOW CAN WARM YOU UP

Sometimes, the best decisions are last minute ones. After purchasing tickets quite a few months ago to see Steel Panther who were playing in Toronto on May 22nd, I was disappointed to hear that Last Bullet would be playing an outdoor show smack in downtown Toronto at the infamous Yonge-Dundas Square on the same night. As has become my custom, I inquired with Last Bullet‘s frontman Bryan Fontez — whom I had interviewed earlier this year — on exactly when Last Bullet would be playing and was told 8:05 pm. Fontez had proven in the past to be deadly accurate with his start times. Sadly, this seemed too tight to be able to catch Last Bullet and then get a good view/spot to see Steel Panther in the mostly general admission area at the Sound Academy.

Fast forward to the night in question and a bunch of us were hanging at fellow Sleaze Roxx’s writer Mark Hovarth’s place prior to the Steel Panther show. Hovarth and his friend Allan were scheduled to attend Steel Panther‘s “Meet and Greet” at the Sound Academy for 7:00 or 7:30 pm. Apparently, the “Meet and Greet” documentation advised that Steel Panther were only hitting the stage at around 10:15 pm which was much later than when Steel Panther had hit the stage the previous year at the Sound Academy. Once I got a hold of that information, the urge to go check out Last Bullet became just too strong not to give in to. After all, my friend Eduardo and I had already seen Last Bullet earlier in the year and they had put on one of the best shows that I had ever seen. Leaving two dissidents behind, Eduardo and I made our way to the Yonge-Dundas Square and got there a good half an hour prior to the start of Last Bullet‘s scheduled set. I had been worried that there might be a big crowd already since the Mississauga Pops — yes, the Mississauga Pops — were scheduled to open the festivities at Yonge-Dundas Square at 7:00 pm. As it would turn out, there was a sizeable crowd standing and listening to the Mississauga Pops — which was essentially a seated choir — but luckily, the Mississauga Pops had been placed away from the main stage, likely so that little time would be wasted between its set and the next act being Last Bullet. That was great news since Eduardo and I were able to secure very good front row standing spots prior to the crowd shifting from the area where the Mississauga Pops were playing to the main stage where Last Bullet were about to play.

If you are going to do some public speaking, my tip to you is not to read things off a cell phone. The lovely young lady that was in charge of announcing Last Bullet to the stage was unfortunately reading quite a bit from her cell phone while up on the stage. Considering that she got a good crowd reaction when she was not glued to her cell phone while addressing the audience, one has to think that perhaps rehearsing once or twice what she had to say prior to getting on stage would have gone a long way towards making her presentation way more dynamic and interactive. 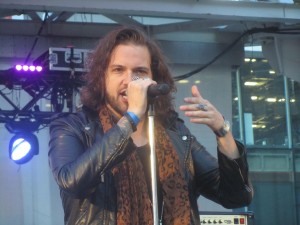 Given that I had planned on attending the Steel Panther concert on this night which was going to be held in an indoor venue, and since going to see Last Bullet was an impromptu decision, I was definitely not prepared for the chilly weather — they were announcing frost overnight — that I would have to endure to catch Last Bullet play live on this night. With both Eduardo and I having failed to bring a coat, there was no need to say that we were freezing or at least quite chilly while waiting for Last Bullet to get on stage. Once the Canadian rockers eventually made their way on stage, I temporarily forgot how cold I was. Last Bullet hit the stage while it was still daylight with their strong opening song “Runnin’ Out Of Time”. I think what sets Last Bullet apart from a lot of other bands is that their frontman Fontez is quite charismatic and able to command the attention of an audience. Little things like confidently pausing in silence (along with the rest of the band) when everyone expects him to sing such as during the second song “Jet” after the intro music to the song was played are classic moves of a poised and comfortable frontman. Fontez was not shy in addressing the crowd which was a good thing since it felt like the audience was pro-Last Bullet and ready to cheer after whatever that he had to say. In recent times, I have noticed that Last Bullet like to describe their music as “sexy” and “high energy rock n roll” and Fontez certainly used the sexy angle quite well to get some strong cheers from the crowd. 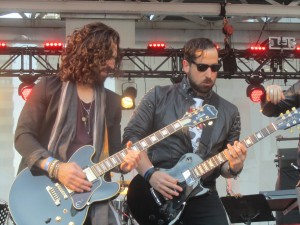 I felt bad for drummer Christopher Galaz who looked like a small caged lion with those plastic sound proofing walls surrounding his drum kit which was nestled deep into the stage away from the audience. The other Last Bullet band member that I temporarily felt bad for was bassist Will Shannon who at one point started one song with some bass grooves. Unfortunately, the sound emanating from the stage for his bass sounded simply awful as it seemed completely out of tune. Luckily for him and the rest of Last Bullet, the horrible bass guitar sound did not seem to impact Last Bullet‘s overall sound as I did not notice the bass sounds aside from that one time. For almost a year now, Last Bullet have been showcasing some of their new upcoming material when playing live and their performance at the Yonge-Dundas Square saw the band play a generous portion again of 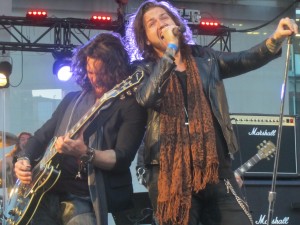 their yet to be released new material. Having heard some of their new songs now a couple of times, I have to say that I prefer the band’s songs from their Last Bullet and Love.Lust.Illusion. EPs more than the new material since I find that the group’s older songs seem to have a harder edge to them. Nevertheless, one new Last Bullet track that I really like is “Southern Lips” which the band played on this night. Given that I was more in tune with Last Bullet‘s “older” or released song material, I was a tad disappointed that only four songs were played from their two EPs and that lead guitarist Brenden Armstrong got an extended guitar solo during “Girl’s Gone Wild”. Surely, an extra song could have been squeezed into Last Bullet‘s set rather than Armstrong‘s guitar solo. 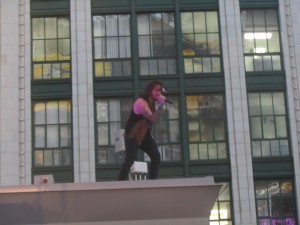 It seemed that as Last Bullet‘s set progressed, Fontez became even better and more bullish in terms of connecting with the audience. During the second last song “Forget The Rest”, Fontez was able to really get the crowd to sing along after him during the chorus portion of the song by getting the audience to scream “Forget The Rest” whenever he sang “Remember The Bad”. By the time that the band tore through their amazing and spirited cover of Elvis Presley‘s “Jailhouse Rock” — I thought that the band had previously announced about two years ago that they were retiring that song from their set but I am glad they didn’t — Fontez had jumped the barrier separating the stage from the audience to head bang and dance through the crowd. Fontez also took a bit of a risk climbing on a portion of the roof for the Yonge-Dundas Square structure. It seemed surreal to see Fontez high up above the 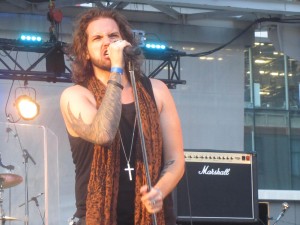 audience with various buildings in the background. As Fontez pointed out to the audience, he did not even know that he would be doing that on this night. Whatever the case, the extra theatrics created by Fontez taking some risks and doing the unexpected added a special element to the night.

Judging from the smiles and cheers from the audience after Last Bullet finished their set, it is obvious that the Canadian rockers put on a great live performance once again. While Last Bullet‘s set definitely warmed me up when the band played, as soon as the group’s set ended, the cold and chilly night engulfed both Eduardo and I’s thoughts as we made a bee line to my vehicle to catch Steel Panther play at the Sound Academy.