LAST BULLET TEAR IT UP AT THE BOVINE

In mid-afternoon on April 2nd, I received the following Facebook message from fellow Sleaze Roxx writer Mark Hovarth: “Hey we’re seeing Last Bullet tonight if you’re around.” The first thing I wondered is how Last Bullet‘s gig had fallen off my radar but then I remembered seeing an ad on Facebook (which seems to be THE easiest way to communicate these days — well done Mr. Zuckerberg) about the show which I must have dismissed due to Last Bullet‘s scheduled late start (1:30 am) and likely short set (the Bovine Sex Club often only allows the same set time per band). In any case, going to see Last Bullet play at 1:30 am seemed to make much more sense on this day.

And after all, it was Last Fuckin’ Bullet! I knew — and you should know — that this is a band that always delivers live. I recalled how I had attended prior Last Bullet gigs only to think afterwards how I had forgotten how good these guys are. Accordingly, I heartily agreed to meet Mark and his friends Rick and Chloe, which I had heard so much about. This would be the seventh time that I would see Last Bullet play live and each time, it has been at a different venue even though all their gigs that I have seen have been in the greater Toronto area. In a way, it seemed odd to see the now seven year old Last Bullet band play arguably the second smallest venue that I would see them play at. Prior venues that I had seen Last Bullet grace over the years are The Rockpile, The Opera House, Lee’s Palace, The Hub Bar & Grill (which gets the nod for smallest venue out of the seven), Yonge-Dundas Square and the Phoenix Concert Theatre.

As it turns out, Last Bullet‘s gig was part of the 4th annual Soundtrack of the City music festival on Queen Street West in Toronto hosted by Music North. Soundtrack of the City advertised itself as “A music festival focused on the heart of Toronto’s music scene, keeping patrons in one area allowing them time to spend watching the acts as opposed to traveling the city.” The 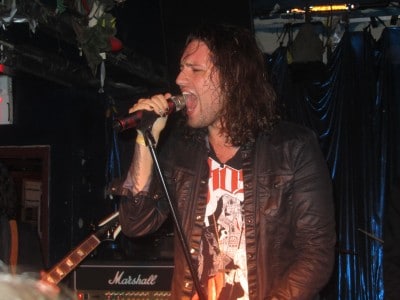 other bands that were on the bill on this night were Iconoclast, Break The Trend, The Reed Effect and Hexe. Unfortunately, I did not have time to make it to see any of these other bands on the bill having to finish something for my “day job.” I arrived at the Bovine Sex Club shortly after 1:00 am with Iconoplast sounding quite good as I made my way to the venue’s backroom where Mark, Rick and Chloe were located. I passed a person that seemed to look like Last Bullet‘s frontman Bryan Fontez but this lightly shaven tall and slim person did not seem to be the man. Funny enough, it was indeed Fontez as I later quickly realized when Last Bullet were putting the final touches on their stage gear. Upon touching base with Fontez after the show, he did confirm that he had indeed gone on a special diet and I got to say that the new look Fontez looks really good!

Once I made my way to the Bovine’s back room, I was greeted with a comment from Rick stating “I am freaking out.” Apparently, Rick is an Ottawa [Canada] native and was stoked to see me sporting a Shock t-shirt. We both agreed that Shock was the premier heavy metal band from Canada’s capital back in the mid to late ’80s. Rick recalled how now former Shock bassist Kevin Monette would wear a black leather jacket no matter what day of the season back in the day. Both of us agreed and joked that the Shock members were “dangerous” and seemingly not approachable back (i.e. metal Gods in our local area) in the ’80s to mere mortals and youngsters like Rick and I. Soon enough, it was time to make our way to the stage to secure a good spot close to the stage because the vantage points of the stage at the Bovine Sex Club are rather limited with the stage only being one foot or so above the general area standing area facing it. 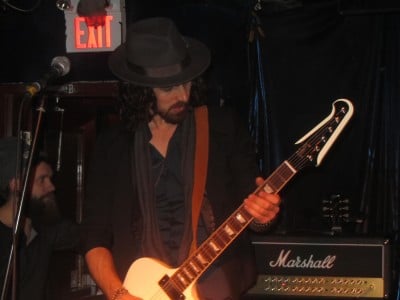 As is usually the case in small clubs, Last Bullet made their way onto the stage with little fanfare since they could be seen setting their gear up before the charismatic Fontez addressed the crowd by gaging the audience’s “cheering” levels. Last Bullet then simply proceeded to literally tear the place apart with a spirited set of sexy filthy rock n’ roll. The band sounded great and tight as they first tore through three songs (“State Of Confusion”, “Jet” and my personal Last Bullet favourite “Cowboy”) from their stellar last EP Love.Lust.Illusion. Since the third time that I have seen Last Bullet play live in July 2014, the group has been incorporating new songs into its live set. Although Last Bullet have officially only released one new single (“Sin”) since that time, I finally felt quite familiar with their new material, which fit very nicely alongside their older tunes. 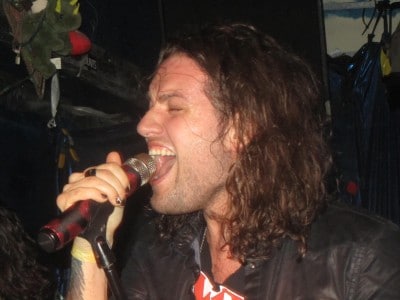 Fontez and rhythm guitarist Michael Silva were pretty funny together during portions of the evening. At one point, Fontez went on a rather long but enjoyable diatribe about the band liking to tackle serious subjects with their lyrics. That could only mean one song — “Southern Lips” — which Silva advised was about “pussy” after Fontez had finished talking and just before the group launched into the song. Last Bullet also took the time to acknowledge and recognize the band’s “number one fan” which was photographer Brystal Allan who has been singing the group’s praises and attends most of the band’s gigs for a number of years now.

Fontez announced that the band had made up a special t-shirt with “Last Fuckin’ Bullet” at the front. When Fontez was about to present Allan with the t-shirt, he noticed that he had the wrong t- 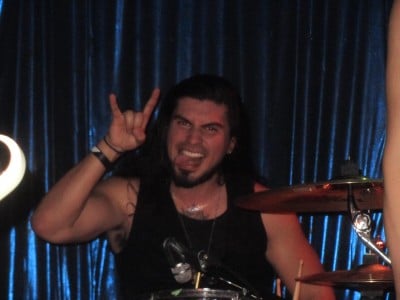 shirt since the one Allan was to receive was custom made to say “#1 Fan” at the back of the shirt. Silva then humorously quipped “Someone’s going to get fired” or something like that. After the next song was played, Fontez apologized to Allan given that he had forgotten to wish her happy birthday. Again, Silva quickly humorously quipped something along the lines of “Someone’s going to get fired.” Fontez more than made up for it though getting the audience to say “Happy birthday” in unison to Allan. Fontez also started to playfully and jokingly “embarrass” Allan by noticing that she was apparently crying as she was seemingly obviously touched at the kind gestures that the band was giving her. It was nice to see the camaraderie on stage between the band members as well as their fans.

Aside from the new song “Smoke And Ashes” which I am not crazy about due to being a little too slow paced and moody for my taste, the setlist from Last Bullet was fantastic with the five best songs from the Love.Lust.Illusion RP being played, 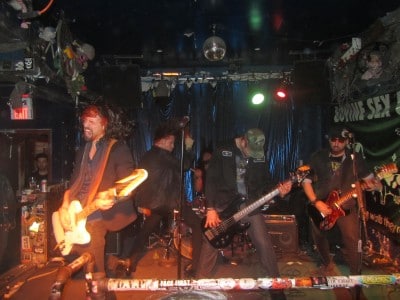 some great new songs (including “Little Miss Filthy”) and “Girl’s Gone Wild” from the band’s debut EP. Just when you thought things could not get better, Fontez started talking about the Guns N’ Roses reunion before Last Bullet finished off the Bovine with a rousing rendition of the classic “Mr. Brownstone.” It was also interesting to hear Fontez tackle the Axl Rose vocals and he did a great job! Last Bullet capped off the night with “Forget The Rest” which brought nice sing along moments for the audience. As usual, Last Bullet put on a fantastic performance cementing what I would think would be their reputation as one of the premier hard rock live acts in the greater Toronto area and beyond. 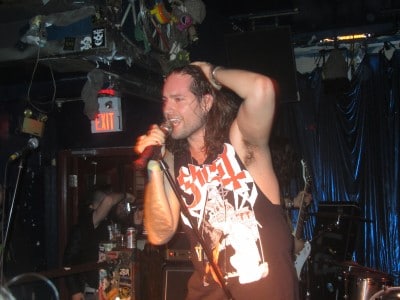