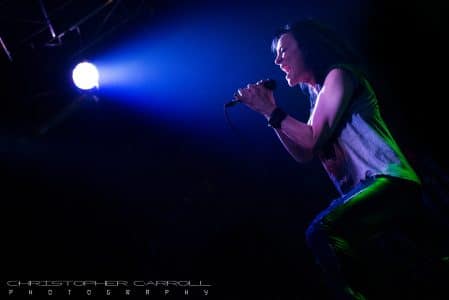 It’s been about 25 years since I’ve seen my favorite singer in the world — Leather Leone — sing live so when I heard she would be playing the Ragnarökkr festival in Chicago, I was excited! Then, when I found out that she and the band were playing a semi-secret ‘warm up’ show at the Foundry, a small bar in Cleveland Ohio, I was ecstatic! I drove the 6½ hours there with a grin on my face. Back in the day, I’d travel to see Chastain play any time they were within four hours of me and afterwards, I’d always hang out to chat with Leather. It always amazed me that she could get such a rich sound out of her voice. Hitting those notes always was astonishing but the best thing about Leather’s voice has always been the ‘color’ she added to those notes. 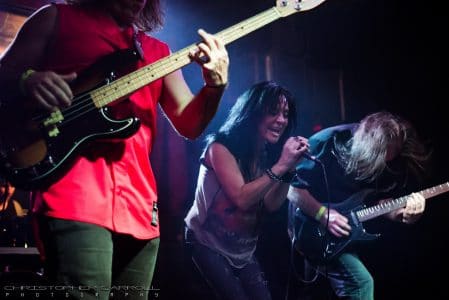 Leather virtually disappeared from the music business around 1991. She popped back in with the Sledge/Leather project in 2011 that proved that her vocals were still amazing. A couple of years later, she sang on another Chastain album (Surrender To No One) and they recently released a new Chastain album entitled We Bleed Metal. Since I loved the old Chastain albums so much, I had a hard time believing that 25 years later, they could put out another album that I would enjoy as much but We Bleed Metal is definitely that. On the album, Leather’s vocals are just as amazing as they were all those years ago. David Chastain sounds like he hasn’t missed a day’s practice in those 25 years but the difference between those classic albums and this one is the production. It’s bright, thick and heavy! It sounds as if you are right there with them in 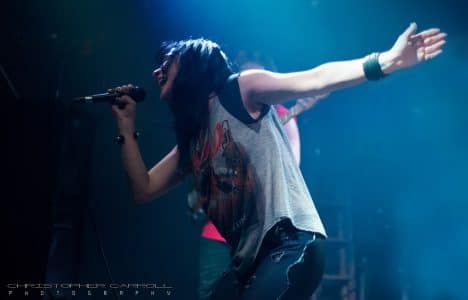 Sounding good after all these years is remarkable on an album. Pulling it off live, especially for a singer, is almost impossible, but the second they hit the stage, it was like Leather had stepped right out of 1991. Leather hasn’t lost a thing. She jumped into those songs with a sureness and precision that made my heart jump. The power, the confidence, the color, the attack.. it was all still there and on top of that, she had grabbed some of the best musicians in the business to take this ride with her. She started with longtime friend and bassist extraordinaire, Paul David Harbour (Chastain, King Diamond, and is currently working on his second solo CD that features not only his incredible bass mastery but also his jaw dropping piano skills). If you have not heard Paul David Harbour play, you are in for a treat. Look him up. The man is fascinating. His fingers fluttered so fast on the bass strings, I honestly found myself watching and trying to figure out which fingers hit the strings and when. He plays with such ease that he makes it look like he’s not even actually touching the strings. 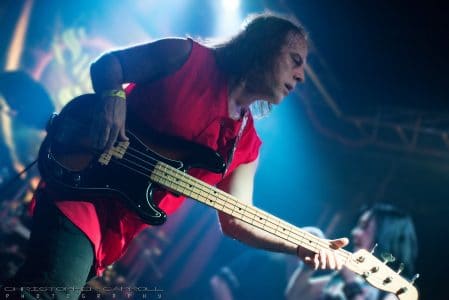 They then recruited Pennsylvania guitarist Jim Dofka who not only played David T. Chastain’s parts with incredible precision, he played them with a comfort and familiarity that would make you believe he’d written them himself. They rounded out the group with a phenomenal drummer by the name of Brian Harris (brother of guitarist Michael Harris who has a long standing professional relationship with David T. Chastain and with whom Paul David Harbour has collaborated). Brian handled intricate drum patterns written for Chastain songs by creative drummers such as Ken Mary and he did it comfortably and with intense power.

In speaking with Paul David Harbour after the show, I let him know how impressed I was with how tight the band 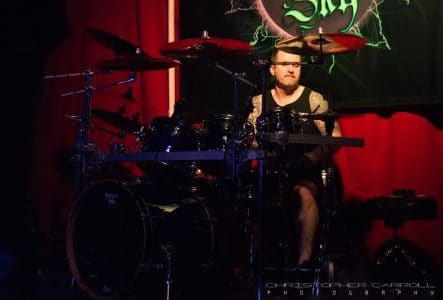 sounded and since I knew these shows hadn’t been planned for very long, I asked him how long they’d been rehearsing for the show. Knowing how complex some of these song parts are, how difficult they are to play and how little time there was between the time the show was announced and the date of the shows, I wondered how they had pulled this together so quickly, so well. I was shocked when his response was, “Four days. Well… three days with the band, one day with Leather!” He told me that considering the professionalism of the players, there would not be a problem and there certainly was not. It sounded like they had been playing together for decades.

They kicked off the show with the title track from the new album We Bleed Metal and played something off of every album Leather recorded with Chastain (except Mystery Of Illusion) and even played three song from Leather’s solo album Shock Waves. 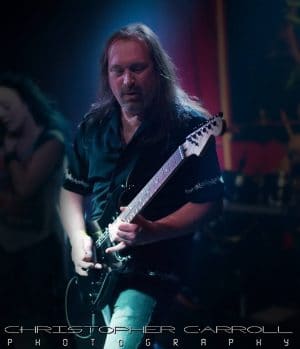 Leather has booked a South American tour starting in September and a festival show in Germany in April 2017. ‘Like’ her on Facebook and keep watching because there is always the chance that she will add another US show or two. If she does, you should not pass up the opportunity to see them! The video below is for Leather‘s show the next night at the Ragnarökkr festival in Chicago, Illinois given that I was unable to find any video footage on YouTube for her Cleveland show.