LIONSAULT GET MORE COMFORTABLE AS THEIR TOUR PROGRESSES 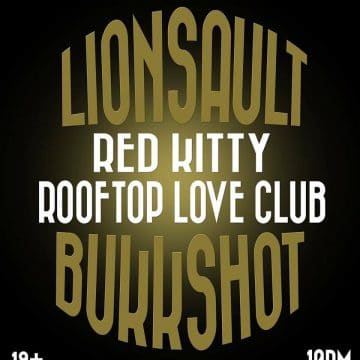 I know. You might be thinking “What gives?” Lionsault‘s gig dates back to July 5, 2016 yet this concert review is being posted almost three months later. The truth is that I started this concert review soon after the show but ended up forgetting to finish it until now… So here we go.

After catching Lionsault playing three nights earlier in a venue that was really a large old styled house that had a make shift stage in its large living room, I was looking forward to seeing Lionsault play in a proper venue with a soundman and existing PA. I was also looking forward to them playing a slightly longer set than the one I witnessed in Hamilton, which was really a little bit on the short side. My good friend and Decibel Geek editor The Meister had also made his way to the Hamilton show but got to hang out with the three Lionsault band members between their Hamilton and Toronto shows given that the band members ended up staying at his place (“Hotel de Meister”) for two nights (which were part of his Decibel Geek review for the two Lionsault gigs). 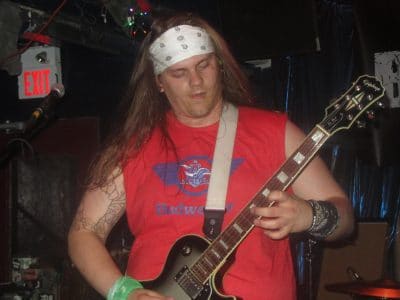 As I arrived to the Bovine Sex Club, The Meister was there to greet me but warned me off the bat that Lionsault were going to do the same set length as back in Hamilton due to time constraints. For those of you who do not know who Lionsault are, they are three young adults originating from the East coast of Canada (i.e. the “city” of Miramichi in the province of New Brunswick) who were on their first ever tour outside the Maritime provinces of Canada. The group’s debut album are you feeling lucky? was so impressive that it finished at #8 on Sleaze Roxx‘s Top Ten Albums of 2015. What made Lionsault‘s tour so special in my eyes was that the band’s guitarist Taylor Sheasgreen had pretty much set everything up from contacting and booking the venues, to getting a number of bands to play with them on each night, to monitoring each band’s set time, to collecting entry fees from the paying patrons on each gig night, to finding lodging for the band each night (which I believe included sleeping in the car on at least one occasion). For that reason, I dubbed Sheasgreen as the “public relations guru” in my concert review of Lionsault‘s Hamilton tour stop and funny enough, he ended up using that term to describe himself on his own Facebook page, which as of today he is still using! Maybe I can get a second career coming up with nifty job titles for musicians? 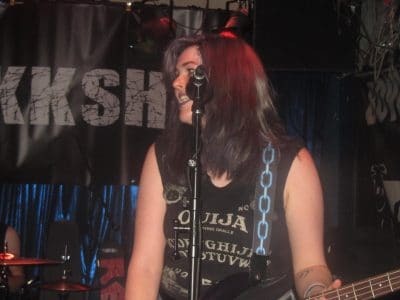 Lionsault‘s setlist was a mirror image of their set three nights earlier but their performance… Well, Lionsault‘s performance was much better this time around. It’s not that they did not put on a good show in Hamilton because I certainly enjoyed myself and even came back for more three nights later. Rather, this time around, Lionsault benefited from a much better sound system which translated into better sounding songs and vocals that you could actually hear. The band’s frontwoman Kortni Nicols seemed to have come out of her shell, so to speak, and just seemed much more comfortable on stage than when I had seen the group play three nights earlier. Lionsault‘s guitarist and “public relations guru” Taylor Sheasgreen was his usual self head banging furiously while playing his guitar riffs on his tiny guitar. Having seen many guitarists with their eyes glued to their strings which inevitably takes away from their stage performance (the 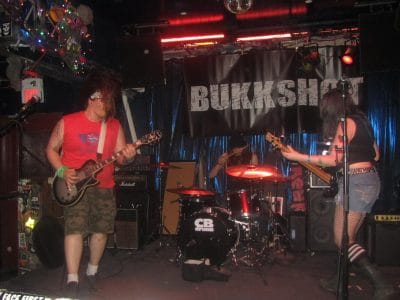 great Jake E. Lee comes to mind), I have to say that I was really impressed with Sheasgreen‘s ability to play while seemingly hardly looking at his guitar strings. Drummer Chase Nicols was his usual steady self. I unfortunately did not notice him that much on this night given that his drum kit was kind of in the back and the Bovine Sex Club‘s stage has what I can only describe as a a bit of a bike rack in front of it.

One unfortunate miscue on Lionsault‘s part was that they forgot to remove the banner from the band Bukkshot preceding them and replace it with their own. Accordingly, Lionsault played their entire set with a Bukkshot banner behind them. In any case, I doubt that anyone in the audience thought that they were Bukkshot so no harm done aside that my photos captured the Bukkshot banner at times. I got to hand it to Lionsault. They chose their best songs from their debut album are you feeling lucky? to play live. My favorites on this night were the opener “Shoot Em Up,” my favorite Lionsault track “Counting Down” (which later became the focus of the band’s next video) and the set closer “High Stakes.” No need to say that Lionsault‘s set which only consisted of seven songs felt too short. Nevertheless, I was happy to catch them live one more time before they headed back east towards their home in the much smaller Canadian province of New Brunswick. 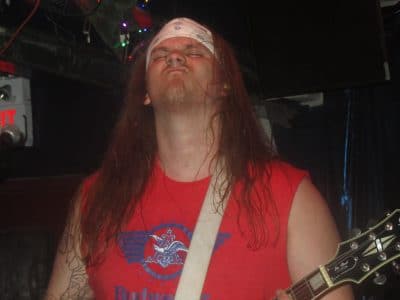 It takes guts, courage and a certain level of craziness to go through what Lionsault — and especially Sheasgreen — went through to complete their first real tour of Canada. I am just grateful that there are bands willing to bring their music to the people rather than wait for some opportunity that will never come to knock on their door.