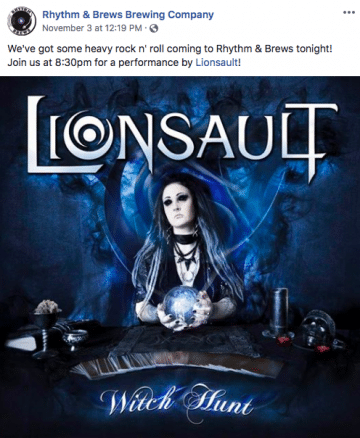 With Canadian maritime rockers Lionsault coming to play in the province of Ontario for the third time in the band’s history and three possible nearby shows (Barrie, Brantford and Toronto) to see them, there was no excuse for me not to attend one of their gigs this time around. The first time that Lionsault came to Ontario, I ended up catching two of their shows (in Hamilton and three nights later in Toronto). I can’t recall why I didn’t go see them play during their next foray to Ontario but I certainly wasn’t going to miss out this time around. After all, Lionsault were travelling quite a distance to play their shows in Ontario since lead vocalist and bassist Kortni Nicols and her younger brother and drummer Chase Nicols reside in Miramichi, New Brunswick which is about a 13 hour plus drive to Toronto. Lionsault‘s new guitarist Cody Ramsdale lives even further in Halifax, Nova Scotia, which is an almost 17 hour drive to Toronto.

Having done the drive from Ottawa or Toronto to Halifax every year from 1998 to 2005, I know how painful the drive can be! In fact, the drive can be quite perilous during the winter months. I’ll share a road war story quickly before getting back to my review of Lionsault‘s concert at the Rhythm & Brews Brewing Company in Cambridge, Ontario. After spending Christmas in Halifax almost 13 years ago, my wife and I along with one of her co-workers were driving back to Toronto in some rather horrible winter weather. The trek through the provinces of New Brunswick and Quebec were usually the worst stretches to go through and this time was no exception. I was driving in one of the two westbound lanes on a rather desolate highway in Quebec with snow squalls impairing my vision from time to time. The snow squalls were so bad that all I could do was drive straight for a few seconds with my vision completely hindered each time that the snow squalls reared their ugly head.

One time after the snow squalls dissipated, I drove under an overpass and to my dismay, there was a stopped car perpendicular to / across the road right after the overpass with people all around it. The car was blocking part of the two westbound lanes and the sides of the road were occupied by huge snowbanks. I knew at that time that due to the slippery and icy conditions, trying to stop my vehicle would guarantee a collision into the stopped car and possibly some of the people standing near it. My wife’s reaction was to scream and close her eyes while her co-worker who was seated in the backseat ducked behind the front seat. Clearly, I would have to shoulder the responsibility of what to do to extricate everyone from this potentially catastrophic situation. I elected to try to past the obstacles by directing my vehicle between the snow bank to my left and the stopped car. From my viewpoint, there was just enough space for my vehicle to squeeze by. By the grace of God, I was able to just miss the stopped car while some of the people around it jumped out of the way into the nearby snowbank. I suspect that the next vehicle behind me wasn’t so lucky because it was a big 18 wheeler, we didn’t see any vehicles coming behind us for a few hours and we later heard on the radio that that stretch of road that we had passed was now closed.

All this to say that I very much appreciated Lionsault making the trek from the Maritimes (which includes the provinces of New Brunswick and Nova Scotia) to Ontario to play a handful of shows. One day before Lionsault‘s scheduled concert in Toronto (on Sunday, November 4th), I was all set to see them play at the Bovine Sex Club when I received a Facebook message from my friend and “rival” website (Decibel Geek) Rich “The Meister” Dillon asking if I’d be interested in seeing Lionsault play in Cambridge later that evening. Indeed, a Facebook announcement from Rhythm & Brews Brewing Company had popped up a few hours before advertising that Lionsault would be playing the venue on Saturday, November 3rd. Given that I would not have to hire a babysitter to see Lionsault play in Cambridge (but would have to for their gig in Toronto), I quickly elected to make the one-hour drive to the venue in Cambridge with The Meister rather than see Lionsault play the next night in Toronto. If there is anything that I learned this summer from my eight concerts (L.A. Guns, Armored Saint, Sven Gali in London, Sven Gali in Hamilton, The Cult, Faster Pussycat, Buckcherry and The Lazys) in two and a half weeks, I don’t really enjoy seeing the same band play the same set two nights in a row. Accordingly, I planned on seeing Lionsault play only once during their latest tour of the province of Ontario.

The drive to Cambridge was uneventful. I knew that the Rhythm & Brews Brewing Company was a bit of an odd location for Lionsault to play since from what I could tell, the venue had only hosted acoustic or unplugged acts so far. Apparently, my friend The Meister‘s CGCM Podcast (Canadian Geeks with beers Chat Metal Podcast) is sponsored by Rhythm & Brews Brewing Company so The Meister was able to connect Lionsault with the venue to land the last minute gig in Cambridge once he found out that the band did not have a gig lined up for Saturday, November 3rd. I was wondering exactly where Rhythm & Brews Brewing Company would be located within Cambridge given that I expected the brewery to be nestled in some out of the way suburb somewhere. As we turned off the highway onto one of Cambridge’s busy streets filled with stores and restaurants, my GPS indicated that we were quite close to the venue. We eventually turned onto a smaller street and as soon as we did that, all the lights, stores and restaurants were in the distance. We drove a few hundred feet before locating the purple lights of the Rhythm & Brews Brewing Company. 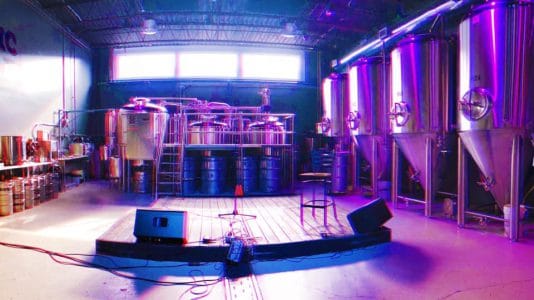 The inside of the venue looked more like what you would expect a brewery to look like. However, there were very high ceilings (I would say 20 feet high) inside the entire venue giving it a very cool grandiose feel. There was a bar and a few tables and chairs closer to the entrance with huge presumably stainless steel tanks towards the back on one side of the venue. Towards the back was also a little stage set with drums. Lionsault were ready to play and were seemingly going to be the only band playing that night. The Meister and I reacquainted ourselves with lead vocalist / bassist Kortni Nicols and drummer Chase Nicols and I met new guitarist Cody Ramsdale for the first time. The Meister knew the Nicols siblings a lot better than I did since they ended up crashing at his place for a few days the first time that they toured the province of Ontario. We all chatted informally seated at one of the tables while sipping some beers (I think one person ordered some type of fruity drink). I asked Kortni about guitarist Taylor Sheasgreen‘s departure and how the band was doing in that regard. I had been under the mistaken impression that Sheasgreen was the band leader given that when I first interviewed Lionsault back in early 2016 and saw them play two times in July 2016, Sheasgreen seemed to be the group’s spokesperson. As I found out, it was Kortni that started the band and it seems that I got the impression that Sheasgreen was leading the band since he was more outgoing than the rest at that time. 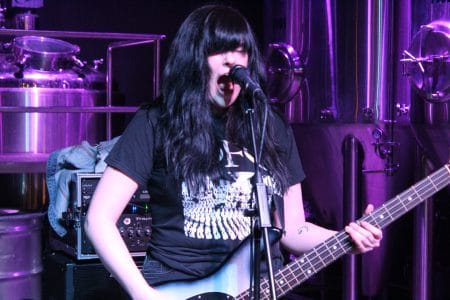 After chatting for a little bit, the Lionsault band members got up on stage with little fanfare. I would love to say that the last minute gig was well attended but it really felt like a private showcase for The Meister and I, along with some people seated at tables in the back. You can’t blame Lionsault for the sparse attendance as the gig literally was announced about eight hours beforehand, it was seemingly the first time that the venue hosted a “plugged” band and Lionsault turned out to be the only act for the night. Although the crowd on hand was a little thin, this did not deter Lionsault from putting on an energetic performance. Kortni addressed the crowd on numerous occasions and way more than when I had previously seen the group perform live more than two years ago. Given the venue’s high ceilings and possible echoing issues, drummer Chase Nicols had advised his bandmates that he wouldn’t be hitting his drums as hard on this night and it did look like he was taking it easy a little bit back there. Newcomer / guitarist Cody Ramsdale seemed to fit very well with the group and showed 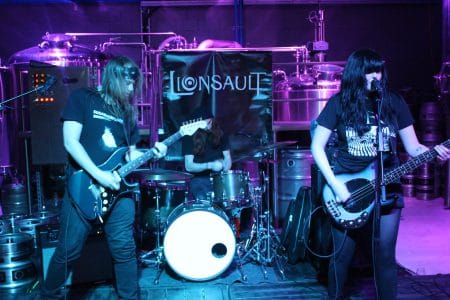 more interaction with Kortni on stage than his predecessor Taylor Sheasgreen had shown two years ago. It felt like Lionsault was more of a group this time around.

With only one album under their belt, Lionsault played a mix of songs from their debut are you feeling lucky? and some new songs including the song “Witch Hunt” for which they released a video for last year. I was surprised that Lionsault‘s song “In The Wild” was not included in the set given that the track served as the official goal song for the hockey team Moncton Wildcats from the Quebec Major Junior Hockey League. In any case, the new songs such as “Voodoo Killer,” “Death From Above” and the interestingly named “This Is Not A Radio Hit” — most of which I was hearing for the first time — sounded really good on a first listen. They seemed to have a bigger chorus section than the band’s songs from the debut album. I was also pleased that Lionsault were playing a longer set than when I previously seen them two years ago. Eleven songs 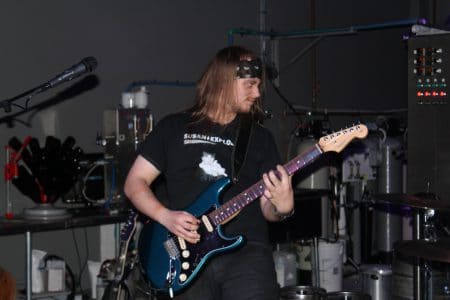 compared to seven makes a big difference! Perhaps Lionsault won some new fans because they did receive quite a bit of unexpected applause from the various patrons in the back whom I suspect were not expecting a live plugged band to be playing at Rhythm & Brews Brewing Company on this night.

After Lionsault‘s set, the band members convened back to the table where Rich and I had chatted with them pre-show. Although I had planned on bringing my mini audio recorder along, I ended up forgetting it so started to see if I could record them via my iPhone. After a bit of fiddling around, I proposed to the Lionsault band members that we do an impromptu interview and they all seemed keen to do it. Even the normally reserved Chase piped in a couple of times during the interview and he gave one of the most candid answers that I have ever heard in any interview that I have ever done. Hopefully, I’ll finish transcribing the interview soon. If you get the chance to see 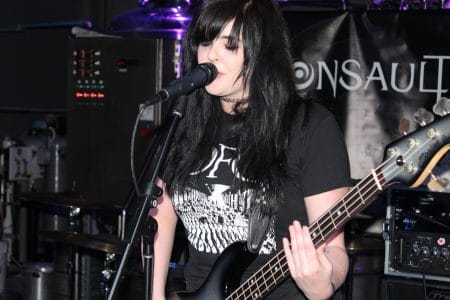 Lionsault live, make sure that you do. They have the potential to be the next big thing.