LIONSAULT IN THE COMFORT OF A LIVING ROOM 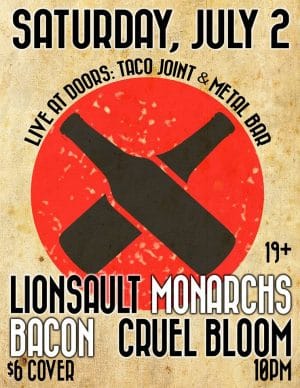 You might be wondering “Who the hell is Lionsault?” I was wondering the same thing myself when in the fall of 2015, I believe a radio broadcaster from the East coast of Canada e-mailed me a link to Lionsault‘s video “Living With The Devil.” I gave the video a quick “audition” and liked what I heard as it reminded me a little bit of some early Halestorm. A few weeks later, the group’s debut CD was in my hands and I was simply blown away. Monster guitar riffs, a bombastic drummer and a female vocalist — what more could a man ask for? I was quite smitten by Lionsault‘s debut album are you feeling lucky? because it ended up #8 on Sleaze Roxx’s Top Ten Albums of 2015. Shortly after, I interviewed two of the group’s members and remember distinctively asking Lionsault‘s guitarist Taylor Sheasgreen off record when the band was going to play in the Toronto area. The reason of course is that even though Lionsault are based in Canada, the “city” of Miramichi, New Brunswick — and I use the “city” term loosely given that the population was less than 20,000 people back in 2011 — where they hail from is just under a 14 hour drive from Toronto.

Having been to the province of New Brunswick many times before (usually just passing through to make it to Halifax, Nova Scotia), the chances of me getting to anywhere in that province to see Lionsault play live were slim to none. Accordingly, I was very pleased that Lionsault announced their first ever tour entitled the Sick As It Gets Summer Tour, which consisted of eight shows with five in the province of Ontario where I reside. Surely I could find one date that fit in my schedule even if I had to drive a few hours to get there. It turned out that the first gig that I could attend on Lionsault‘s summer tour was in Hamilton (only a 45 minute drive from Toronto). Back in December 2015, I had recommended to Lionsault that they send a CD to my friend The Meister (who unfortunately writes for a “rival” website) since we had for the most part pretty similar taste in music. It was no surprise when I inquired with The Meister to see if he was going to see Lionsault play live, his answer was a “resounding” yes and he even ended up hosting the band for two nights from what I understand.

Having never been to the Doors Pub: Taco Joint & Metal Bar, I really did not know what to expect. When I arrived near the vicinity of the “venue”, it seemed like I was back in university with young people walking the streets in bunches along what appeared to be a closed off street filled with many many bars. The Doors Pub: Taco Joint & Metal Bar reminded me of many fine establishments in Toronto that are located in these very big older houses. There were quite a few tables or perhaps picnic tables surrounding the older house with many young people seated, chatting and drinking. Clearly, Lionsault would not be playing outside given that there still was a substantial amount of residential homes and/or apartments near the venue. When I walked into the “venue”, all I could see were a few no frills tables, a small bar and a very narrow staircase with wooden steps — the kind that you might see in an older house and leading to some sort of creepy dusty attic.

I sent a quick Facebook message to The Meister whom I spotted coming down the narrow staircase and heading off to the character filled washroom downstairs. I made my way up the narrow staircase only to be greeted by Lionsault‘s guitarist and public relations guru Taylor Sheasgreen and drummer Chase Nichols. I scoped the area very quickly and liked the setting 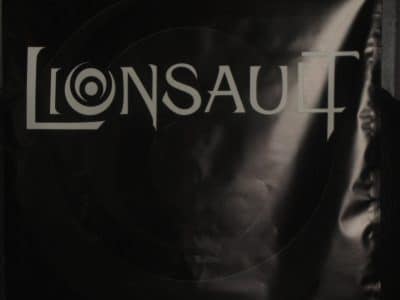 with the tall ceilings, the big windows and old styled house. However, I also wondered where in the hell was the band going to play. It turns out that Lionsault and the there other bands were going to play in what would have been the house’s beautiful living room, which had a grandiose fireplace and a spectacular chandelier. I had the opportunity to speak to Sheasgreen a little bit prior to Lionsault hitting the stage. Sheasgreen explained that he had set up most of the tour dates and found bands to play with at each town. Given that Lionsault were newcomers and likely not well known in the province of Ontario, Sheasgreen had elected to have Lionsault play second on the bill (which would be around 11:30 pm) to hopefully attract the most amount of people to see them play. 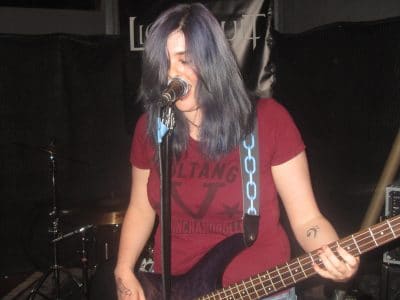 I must say that I was quite concerned about the view to see whichever band was playing. With the “stage” the same height as the “general admission” area, you would likely be able to see virtually nothing unless you were in the front row. My concerns were validated as when the first group Monarchs started to play, the “general admission” area filled up very quickly and my view of the “stage” was severely impeded. The Meister had it even worse with his shorter height and he eventually elected to stand on a bench to get a better vantage point. Monarchs‘ music wasn’t exactly my cup of tea but I will say that the crowd that was there for the band’s set seemed quite into them. Before long, it was Lionsault‘s turn to set up and I learned at that time that unfortunately, each band only had a half hour to play. 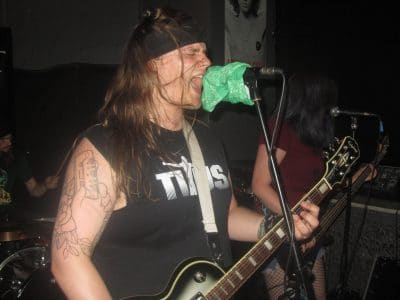 Nevertheless, I was excited to see and hear Lionsault play live because as I remarked to Sheasgreen, the band seems to have that perfect blend of more modern music (which I admittedly usually dislike) and older styled music (think ’70s and ’80s hard rock and metal). Lionsault didn’t disappoint. The band was super tight and sounded great right off the bat although singer / bassist Kortni Nicols‘ vocals were quite difficult to hear for the first few songs before some adjustments were made. This time around, The Meister and I made sure that we were standing in the front row of the “general admission” area. Sheasgreen was a ball of energy and I was thoroughly impressed on how he could head bang with his long hair flowing in the air while still flawlessly playing his guitar parts. I even saw him play a seemingly difficult guitar solo while doing some full on head banging. Very impressive! Drummer Chase Nicols, whose drumming on Lionsault‘s debut album, is nothing short of sensational sounded great and seemed to be enjoying himself. Lionsault‘s frontwoman Kortni Nicols was a bit more stationery during her performance but still rocking. 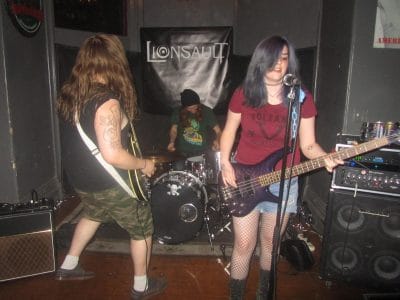 Lionsault opened their set with “Shoot Em Up” which is the first song off their debut album are you feeling lucky? and which has such a powerful guitar riff to kick off the song that I am sucked into listening to the entire album each time I hear the riff. It was a great song to start the band’s set as it set the tone right away. Next up was “Vixen” — a song that I only really discovered the title for the purposes of this review — but that I always enjoy when playing the group’s debut album. “Light It Up” followed and if you haven’t checked out the group’s humorous video for that song, make sure you do! Next up was one of my favorite Lionsault song — “Counting Down.” Although Lionsault only ended up playing seven songs, the seven tracks that they did play were all my favorites from their debut album. It was around this time that the levels for Kortni Nicols‘ vocals were adjusted and it really made a big difference starting with the song 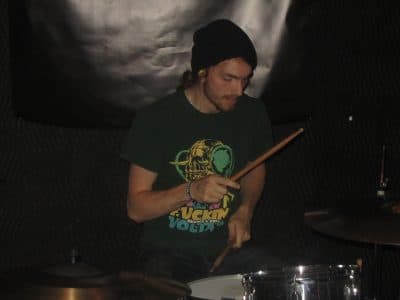 “Living With The Devil” given that even on the group’s album, her vocals can sometimes be a little overshadowed by the bombastic music emanating from the group’s trio.

Both singer / bassist Kortni Nicols and guitarist Taylor Sheasgreen took turns addressing the audience with the latter twice mentioning that this was his first time — or at least the group’s first time — in the city of Hamilton. The one thing that I would suggest to Lionsault and particularly to Sheasgreen is not to bother addressing the crowd when drummer Chase Nicols is playing because I could hardly hear anything that Sheasgreen was saying when that occurred and I was literally within a few feet of him when he was talking. Lionsault closed off their fantastic set with “Running Wild” and “High Stakes.” Obviously, Lionsault‘s set was way too short and Sheasgreen advised The Meister and I after the show that the group had a cover of a Mötley Crüe song (not sure 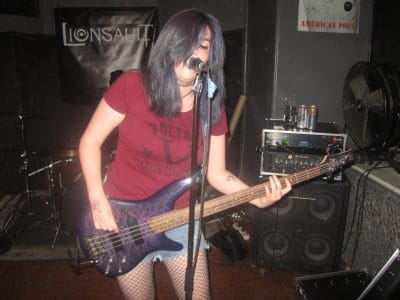 which one) had the group had a little more time to play. Perhaps I’ll just have to venture to the Bovine Sex Club in Toronto in 24 hours or so to catch Lionsault play a longer set. Overall, Lionsault put on a great performance and it was a real treat to hear them play their fantastic songs in a live setting.