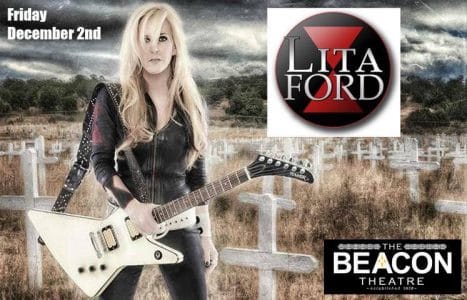 Lita Ford kicked off this leg of her tour in Hopewell, Virginia, just a few miles outside of Richmond. Now, I’ve seen Lita many times over the years but I still get excited when I hear she is coming to town. In all the times I’ve seen her, I’ve never photographed her show until now so this one would be different than all of the others. Shooting a show is a completely different experience than watching the show. Although you are looking through the lens and constantly making adjustments, lining up shots and trying to time the lights, you are also so close to them that it’s almost like standing on stage next to them. Often, you are close enough that you could reach out and touch them. You pay closer attention to the movement, the looks on their faces, the poses. You pay so close attention to some of the subtleties that it’s almost more entertaining than sitting back and watching the show. 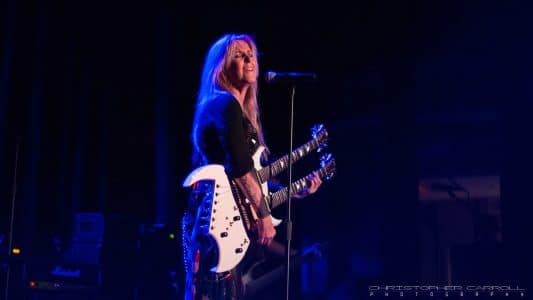 I was happy to finally have that experience with Lita. She did not disappoint. She doesn’t just stand still onstage. She has signature moves even as far as the position of her guitar. She’ll sling it down for a verse, pull it out for a chorus, lift it up for a bridge. Lita is extremely comfortable with a guitar in her hands. She barely payed attention to it, hardly looked at it but the whole time, she was playing runs while singing the songs. She would play a passage, then slap a toggle switch, then spin the volume knob down, all in a millisecond.

She played some very fun songs pulled from her first few albums and even her most recent studio album, mostly with one of my favorite guitars she owns — the yellow B.C. Rich Mockingbird! It sounded great and looked amazing. Her band sounded perfect with Bobby Rock (who played in Nitro, Nelson and Vinnie Vincent Invasion), guitarist Patrick Dennison (Union Underground and Heaven Below) who sang as well as he played, and finally, my favorite band member, Marty O’Brien. It may be easier to just list the stars Marty has NOT played with! This guy has toured with everyone from Tommy Lee to Disturbed and recorded with Kelly Clarkson, Mya, Celine Dion and Chris Cornell. 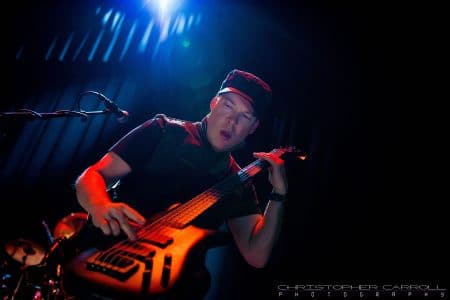 I met Marty in LA when he jumped up to play some songs at Chuck Wright‘s The Ultimate Jam Night. What sticks out in my mind and what we talked about when I met him was him playing songs with Extreme’s Nuno Bettencourt. Now keep in mind, this is a ‘jam night’ — not a rehearsed show — but Nuno played some very complex songs and Marty, being a truly amazing bassist, didn’t just ride a string. He was in there matching Nuno and keeping up the pace. It was truly impressive. On top of that, he still did all of his cool moves onstage! He did that at the Lita show as well. Marty is a photographer’s dream. Unfortunately, he and Patrick were practically in the dark with the lights at the Beacon Theatre in Hopewell so a clear photo was a rarity. He doesn’t dance around onstage, he plays…. And the music takes over and the next thing you know, his bass is upside down. He just seems to let the music move him and he’s a blast to watch! Lita said this of Marty: “Marty O’Brien is one of the finest bass players in rock. A true bassist to me is someone who plays with his or her fingers. No picks on a bass. It takes away from a true bass sound” and I agree with her 100%. 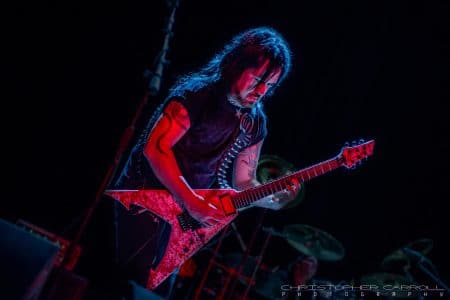 Knocking through songs, Lita seemed to be used to the pace and she didn’t slow down for a second… until her guitar tech brought out the infamous, white, double neck B.C. Rich prototype that, as all of her guitars, was custom made for her by Bernie Rico Sr. She explained how the standard double necked B.C. Rich was far too large for her. She said it would be like wearing a dress so she asked Bernie to scale it down. She also pointed out that he had inscribed his name. It has a flanger built into the 12-string and a power boost in the six-string. She said there was an inscription on the back of both necks. On one, it says something in regard to the guitar and Bernie Rico Sr. and on the other it says, “We love you Lita.” 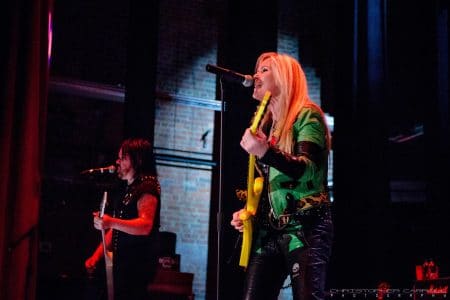 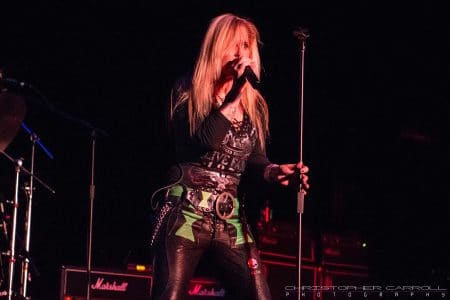 I believe she had a few more songs in there that aren’t listed. It was a fun show and the crowd really seemed to enjoy it. Lita is still on the road going from Amarillo to Ohio, then Maryland, Florida and others as dates are being added on a regular basis. Check out her website for up to date shows. She will also be making an appearance at the M3 Rock Festival in Columbia, Maryland on April 28th where she will play an acoustic set! She has new products out as well. Time Capsule, her latest CD is actually filled with tracks that were recorded back in the day when she would lay them down in the studio, as a glorified demo. You’ll hear a few familiar songs on there, albeit alternate versions. I just finished reading her book and it is highly entertaining! A ‘must read’ for ANY rock fan as it is full of insane stories! Lita is also writing for a new CD. Living Like A Runaway was so good, I’m interested to see what she comes up with for the next one.

Lita Ford playing “Larger Than Life” at the Beacon Theatre in Hopewell, Virginia, USA on Dec. 2, 2016:

Lita Ford at The Beacon Theatre VA Larger Than Life

Lita Ford playing “Kiss Me Deadly” at the Beacon Theatre in Hopewell, Virginia, USA on Dec. 2, 2016:

Lita Ford at The Beacon Theatre VA Kiss Me Deadly