LITA FORD ROCKS LIKE SHE IS TWENTY FIVE YEARS YOUNGER

It seems that it has been an eternity since I have been excited about seeing all of the bands on one bill. However, with the legendary Lita Ford coming to town and two stellar “local” opening bands, Diemonds and Fallen Heirs, all on one bill, this was one show that I was really looking forward to!

I arrived nice and early — about half an hour prior to the first band’s start time — at the Phoenix Concert Theatre and already there was about two rows of people lined up behind the stage waiting for the show to start. There were a few familiar faces in the audience including my friend The Meister (he does not seem to miss any Diemonds gigs) and a few new ones such as rival website photographer Brian. The Phoenix Concert Theatre’s stage is pretty high up so that the concert goers near the stage would be at about neck height of the stage — depending on how tall you are of course. I had seen Fallen Heirs play last year at Lee’s Palace and although I really did not know much about them at that time, I was impressed enough to buy their self-titled EP which has received a regular rotation among the records I like to play ever since then. 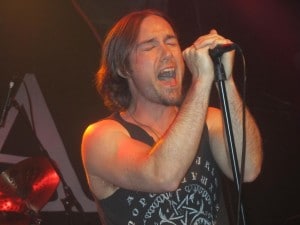 The Fallen Heirs line-up that hit the stage this time around was different than when I had seen them last year since there were only four members with one of the guitarists from last year not present. This time around, lead vocalist Tim Shaw was sporting a different more rock star like look with longer hair and some facial stubble, which was quite different from his short hair clean cut look from last year. Lead guitarist Jay Sayne on the other hand had not changed much and certainly already had the rock star part down pat with his long hair, tank top and bulging muscles. Sayne was quite difficult to photograph — at least for me — given his constant moving around.

As soon as I heard Shaw sing, all I could think was how much I love this guy’s voice. I am not sure why but to my ears, it does not get much 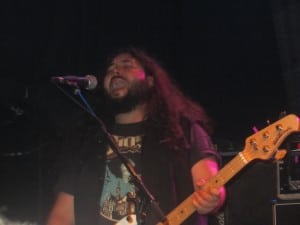 better than hearing Shaw sing. Unfortunately for Fallen Heirs, the sound emanating from Philly Dee‘s bass sounded a tad off and/or too loud which kind of hurt the overall sound of the band. Fallen Heirs mostly tore through songs that I was not familiar with (Sayne was kind enough to provide the band’s setlist after the show) but the two that they played from their self-titled EP — “Lead Us To Water” and “Wake Up” — I really enjoyed. I also really liked their last song  “Burn” that closed off their unfortunately too short set. The good news is that the band announced that they were putting the finishing touches on their next album but I can’t remember at this point whether the band was planning on releasing it in late 2015 or early 2016. Whatever the case, Fallen Heirs are proof that winning fans over the old fashioned way — i.e. through a band’s live performance — is an art that I suspect that they are very good at. 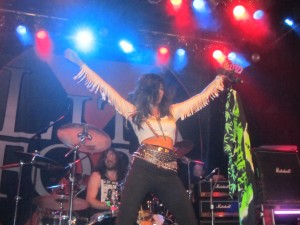 One of the perks of living in Toronto is having one of the best sleaze rock bands originating from the same city meaning that Diemonds are hands down the group that I have seen the most live in the last three years. The Canadian sleaze rockers seem to be the last opening band on every bill involving a semi-big group — i.e. semi recently Danko Jones, Sebastian Bach and now Lita Ford — plus they play headlining shows in and around the Toronto area throughout the year meaning that there are ample opportunities to see the band play live if you live in or are willing to travel to Toronto. Throw in that Diemonds have released what I consider to be one of my favorite all-time records in The Bad Pack and you can surely understand that I was really pumped to see them play. 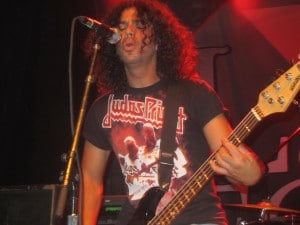 This was also going to be the first time that I would see new bassist Adam Zlotnik in action given that he took over — with little fanfare — the bass duties from now former bassist Tommy Carvalho almost four months ago. You can read more about it in my upcoming interview with Diemonds‘ sexy female frontwoman Priya Panda.  Although The Bad Pack is clearly the album that put Diemonds on my map, the band has been playing tracks from their now recently released new album Never Wanna Die for more than two years and in the last eight months or so, mainly tracks from that new record. As seems customary whenever Diemonds hit the stage, the whole band minus their frontwoman are on stage for the opening chords of the first song before Panda hits the stage. The attractive female lead vocalist always comes out wearing some sort of sexy outfit and this time it was some tight black pants with a white silky type tight top with long sleeves showing a bit of her mid section. 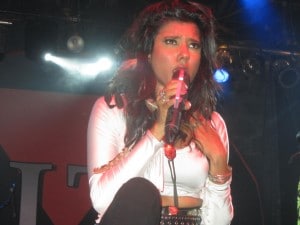 Diemonds kicked off their set with my favorite new song of theirs — “Meet Your Maker” — that I had heard up to that point. From then on, it was one new song after another from their Never Wanna Die record. Given that the album had yet to be released in Canada at the time of the band’s show, I was only able to recognize a handful of the new songs (Panda was kind enough to provide the band’s setlist after the show) but I identified “Ain’t That Kinda Girl” as the song that I thought that I really liked when the band opened for Bach back in late December 2014 and of course the first single “Over It” for which a lyric video had already been released. Panda was more interactive with the audience this time around — perhaps because the band may have had more time — describing and introducing some of the songs prior to the band playing them. 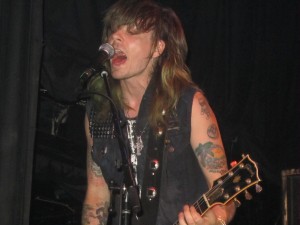 Just like Fallen Heirs, Diemonds‘ bass sound was a little off and/or too loud which hurt to some degree the band’s overall sound. This became even more obvious once Lita Ford hit the stage with what seemed like perfect, crisp and well balanced sound among all of her bandmates’ instruments. Diemonds closed off their set by including a few goodies from their past: “Get The Fuck Outta Here” from The Bad Pack and their punk meets metal anthem “Highway” from their In The Rough EP. Another great performance by Diemonds that solidified why this band deserves way more local, national and international recognition. 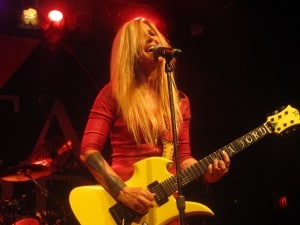 looking at her with her well put together frame, full body bright red leather suit and flowing blond hair. Her positive and what seemed like genuine enthusiasm to be playing in front of the Toronto crowd was fun to see. As previously mentioned, the sound emanating from Ford and her band was impeccable and crystal clear, especially when compared to openers Fallen Heirs and Diemonds. Ford opened her set with “Larger Than Life” from her Dangerous Curves album before launching into two songs “Relentless” and the Elton John cover “The Bitch Is Back” from her latest record Living Like A Runaway — which no doubt has gone a long way to establish her comeback and erase the memories from her horrible Wicked Wonderland album with her ex-husband Jim Gillette. 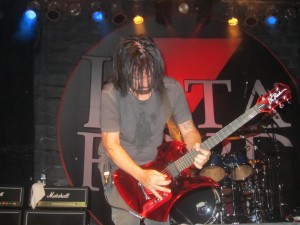 From then on, Ford started “name dropping” before introducing some of her songs including the ballad “Falling In And Out Of Loe” which she co-wrote with Motley Crue‘s — or should I now say Sixx:A.M.‘s — Nikki Sixx, the fast paced “Can’t Catch Me” co-written with Motorhead‘s Lemmy Kilmister and her best ballad and hit Close My Eyes Forever co-written with Ozzy Osbourne. Ford also announced that she was nominated for a Grammy for her song “Shot Of Poison” — a fact that I was not aware of. For me, Lita Ford was at her pinnacle with her Dancin’ On The Edge and Lita albums. Although Lita was well represented during the show with four songs played from that record, only predictably playing one track — “Gotta Let Go — from Dancin’ On The Edge was a real pity. 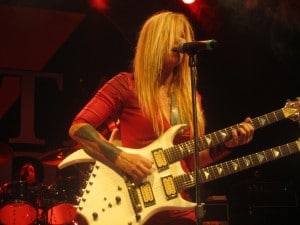 Not being that familiar with Ford‘s time in The Runaways nor the Sex Pistols, there was one song — “Black Leather” — that I did not recognize late in her set. Predictably, Ford closed off her show with what has to be considered her two biggest hits — “Close My Eyes Forever” (with guitarist Patrick Kennison admirably handling Ozzy‘s vocal parts for that song) and “Kiss Me Deadly”. I would remiss if I did not mention Ford‘s all-star cast of musicians that form her band because they all kicked ass from drummer Bobby Rock (whom I have been aware of since his days with Vinnie Vincent Invasion) who delivered a cool drum solo which included a part that mostly included cymbals, talented guitarist Kennison and the unorthodox moving and bass playing Marty O’Brien. Speaking of O’Brien, he was flicking picks into the audience throughout the show and one ended up literally in one of my armpits.

Lita Ford proved on this night that she still has plenty of rock and roll left in her and I for one can’t wait to read her upcoming book Living Like A Runway: A Memoir.