LÖVE RAZËR TEAR DOWN THE HOUSE! 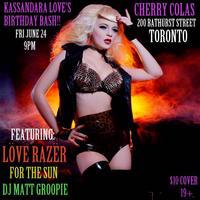 Some bands just impress you immediately. You just know it from the first song. I keep saying rock n’ roll is a tough business these days as bands often need to be their own managers, promoters and image consultants, and that’s on top of learning how to play instruments and writing good songs that resonate with people.

Based on what I saw last night, Löve Razër in my opinion have nailed all of these categories. The sheer energy and passion they bring to their songs and stage performance is remarkable.

The venue was downtown Toronto’s Cherry Cola’s Rock ‘n’ Rolla Cabaret on Bathurst Street. Anyone who’s been around for awhile has seen this area morph from punk and metal to gothic kids in the ’90s and 2000s, and now most all of that cool stuff has disappeared and been replaced with hipsters. So the crowd last night was somewhat eclectic and diverse. Four young musicians walking around the bar prior to their set wearing long hair, tights and eyeliner certainly stuck out like a sore thumb but in a good way. Rock n’ roll is still show business and when Löve Razër hit the stage, they effortlessly commanded everyone’s attention with their look and sound.

As the band tore through their set, the crowd moving to the front of the stage continued to grow as you could see the looks on people’s faces thinking ‘Wow! Who ARE these guys?” 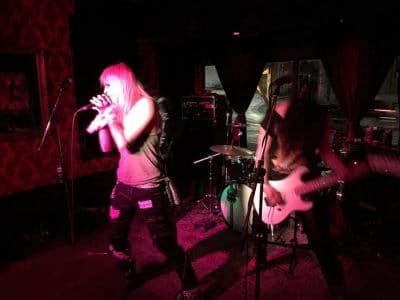 Having only a handful of original tracks Löve Razër included several cover songs consisting of Mötley Crüe‘s “Live Wire” and “Shout At The Devil”, Bob Seger’s “Her Strut”, Quiet Riot‘s “Bang Your Head (Metal Health)” and Guns N’ Roses‘ “Welcome to the Jungle.” Löve Razër‘s original songs blended in perfectly with the genre they took their influences from and I can confidently say their original tracks are written just as well as the ’80s hits that launched other bands to super stardom.

The soaring melodies and focused solos of Löve Razër‘s original songs including the ones from their EP Rock ‘N’ Roll Addiction, namely “Turn It Up,” “All Time Sleaze” and “First Class Bitch” enthralled the crowd every bit as much as the cover songs that everyone knew. Lead singer Syndey Snow regularly engaged with the audience by actually jumping into it and singing among the crowd while the rest of the band stomped and scorched through their songs. Lead guitarist Mickey Bonez also has learned his craft well spitting out every intricate solo perfectly, usually standing in a Slash-esque pose but also no stranger to delivering the guitar goods on the floor either kneeling or flat on his back at one point. Metal Mike played his bass guitar slung low and looking cool, and we even got a drum solo from Crissy Stixx who told me before the show that his drummer idol was Tommy Lee. And it showed as he pounded into his kit mercilessly.

Nearing the end of their set with “Welcome To The Jungle”, the crowd grew louder in their support for Löve Razër. Heck, even the bearded hipsters were won over by the band. After their last song “All Time Sleaze”, the crowd demanded an encore shouting ‘One more song!’ over and over until the request was granted as Löve Razër launched into yet another Mötley Crüe cover, this time being “Girls Girls Girls.” 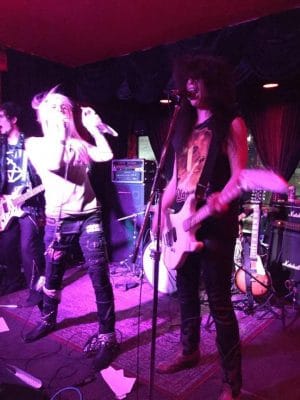 Overall, it was a very successful show for the band, and this reviewer is looking for bigger things to come from Löve Razër!