WITNESSING GREATNESS IN THE MAKING

There is something to be said for creating your own opportunities and making a name for yourself through your relentless hard work. The new Sunset Strip like sleaze rockers, Löve Razër, are a prime example booking their own headlining gigs throughout the province of Ontario (in Canada) and beyond, and essentially making things happen for themselves rather than waiting to open for the next big band that comes their way. For that reason alone, the group has my respect. 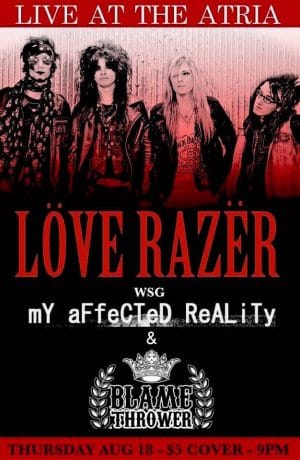 This time around, Löve Razër had booked themselves at The Atria in Oshawa, Ontario, which is really more of a diner with a pretty big stage in a portion of the restaurant. By the time I arrived at the entrance of the venue at around 10:40 pm or so, I received a really nice reception from all the Löve Razër band members and entourage since they were all seemingly milling around the entrance area. I also had the chance to speak to the group’s affable bassist Metal Mike who advised that the band was trying to book gigs from Thursdays to Saturdays and around the band members’ work schedules. Taking into account that Löve Razër are based out of Windsor, Ontario, which is just across the border from Detroit, Michigan for all you Americans out there, the amount of driving that Löve Razër have to do for most of their gigs is impressive. Oshawa would have been at least a five-hour drive and especially since the group would have had to go through the always busy Toronto highways. The group is already booked to play at the Brass Monkey in Ottawa, Ontario on September 23, 2016 (check out their upcoming tour dates), which would likely be about a nine-hour drive from Windsor. Clearly, this is a group intent on making things happen for themselves. One other thing I really like about Löve Razër is the apparent camaraderie between band members, which at least to an outsider as myself, gives the impression that the group is a solid happy unit.

After being greeted by the Löve Razër band members, I made my way to a portion of the restaurant / bar occupied by many writers for rival website Decibel Geek. Indeed, The Meister, Shawn “Animalize” Irwin (who happens to be Löve Razër bassist Metal Mike‘s cousin) and Laura Suchan were all on hand to witness the upstart group’s gig on this night. The good news is that Sleaze Roxx will likely have a better representation than Decibel Geek tonight as Löve Razër are scheduled to play at Cherry Cola’s in Toronto this evening. Unfortunately, I missed the first opening band my AfFecTed ReALiTy (I wonder if the KiLLeR DWaRfS should get credit for how the former write their name) but did make it for the second group Blamethrower. Knowing nothing about them, I was curious to hear what they would sound like. 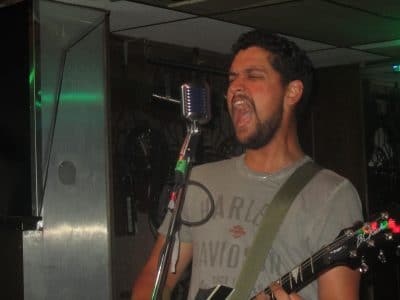 As it turns out, Blamethrower play a particular brand of rock n’ roll that I really like. The band’s guitarist CJ Keys (I assume that is his name) was laying down some killer guitar riffs from which you know a song will have to be at least half decent just from that. Lead vocalist and guitarist Johnny Paty was a good frontman chatting to the crowd and introducing some of the songs. He was pretty funny at one point advising how he wanted to get out of his hometown (Oshawa) since everything about it sucked before being right back where he started, the reason of which escapes me. Since I don’t know the names to any of Blamethrower‘s songs, I’ll just say that the first two really rocked and were very good. The slower third (I think) tune kind of lost my interest a little bit but the rest of the tunes played were quite good. Although I knew the first cover (which was a hit song) that Blamethrower played, it’s not the usual type of music that I would listen to so I simply cannot pinpoint the name of the song or group that they covered. In any case, I was impressed enough about Blamethrower to seek out some of the band members after their set to hopefully secure one of their albums. Blamethrower drummer Brandon E.M. Savage, who was the only band member sporting long hair and any kind of rock star look, was very friendly and advised that the group had a few tracks online but more importantly was in the midst of finishing recording an album so I am definitely looking forward to picking it up whenever it’s available. 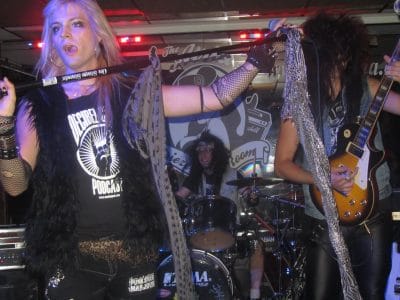 Next up was the main course which was Löve Razër. As the group was about to start, The Meister correctly pointed out to me that it felt like when we had seen Diemonds play at The Foxx Lounge Rock Bar and Hotdoggery in Barrie, Ontario almost a year ago (how time flies). I have to give credit to those guys. You could not tell if there was one person, 20 people, 200 or 2,000 in the audience because the band members put on a spirited energy filled set as if there were thousands attending. Having missed the glory days of the actual Sunset Strip days back in the ’80s, it seems that Löve Razër are the closest that I will get to experiencing that vibe, at least in Canada that is! The band members are intent on bringing back the glory days of the Sunset Strip and certainly looked the part attired in vintage sleaze type Guns N’ Roses / Mötley Crüe wear. Having only been around for just over a year, it is understandable that Löve Razër might not have 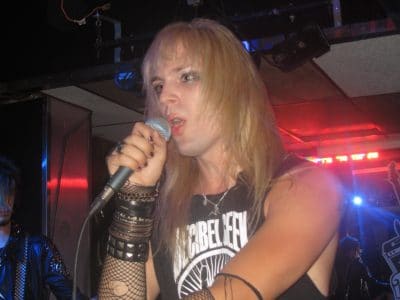 enough original material to fill out a 90 minute set so the audience was treated to a few very good covers as well. Löve Razër hit the ground running with “Turn It Up” from their very good debut EP Rock ‘N’ Roll Addiction. The group followed up that with a cover of Quiet Riot‘s classic “Bang Your Head (Metal Health).” For the first couple of songs, it seemed that Löve Razër frontman Sydney Snow had not quite found his vocal range yet but by the time the band launched into its cover of Bob Seger‘s “The Strut”, he seemed to nail most of his vocals.

I actually enjoyed hearing Löve Razër‘s original songs over their covers and I got to tell you, some of their unreleased songs such as “Wrong Way,” “Partied Out Freak” and “Venom” sound really good. I can’t wait for Löve Razër to release an album with hopefully those tracks on it. In some ways, it is a bit frustrating seeing Löve Razër play because they have some much really good original songs 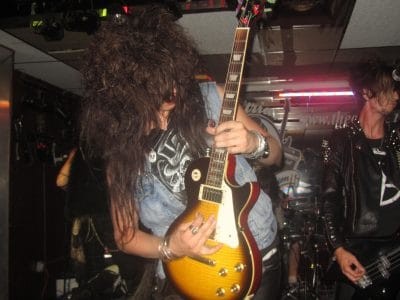 but I’m not familiar with them. Accordingly, although I like what I am hearing, I would have an even better time if I was more familiar with their material ahead of time. I experienced the same type of “frustration” hearing Diemonds play new unreleased originals live for two years prior to the release of their absolutely stellar Never Wanna Die album. In any case, I know that eventually, all of Löve Razër‘s great original songs will get recorded and made available to everyone outside hearing them at their live gigs. I also liked all of their other original unreleased songs that they played which included “Toast To The Night,” “Toxic Tears” and a yet to be titled song, the latter of which Snow advised the group was only playing for the second time in a live setting. 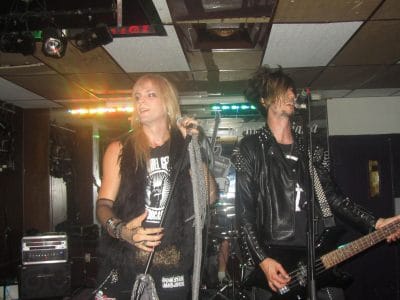 year old guitarist Micky Bonez. When I first caught part of Löve Razër‘s set at their inaugural gig in Toronto (at the Linsmore Tavern about two months ago), Bonez was rather stoic and stationery compared to Snow and Metal Mike but on this night, he was really entertaining to watch and moving around including twirling while playing his guitar, doing a few choreographed moves with Metal Mike and Snow, taking center stage for his guitar solos and even falling on his knees for one guitar solo. Perhaps it was the very small stage at the Linsmore Tavern that made Bonez feel constrained on that night but this time around, he was the entertainer that I was hoping that he would be. But more importantly, this guy can really play!!! I absolutely love his guitar tone. He just seems to have captured the 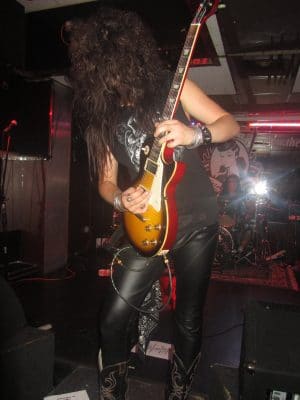 perfect ’80s like guitar sound and I could really listen to him play and solo away all night.

Far in the distance due to The Atria’s stage being somewhat deep was drummer Crissy Stixx who along with Metal Mike provided the solid musical foundation all night from which Bonez and Snow can each shine. Stixx did get a mini-drum solo during the group’s first single “First Class Bitch” which was recently included in Sleaze Roxx’s Ten Great Songs of 2016 (thus far). Löve Razër ended their spirited set with a cover of Guns N’ Roses‘ “Welcome To The Jungle” and their own anthem “All Time Sleaze” from their Rock ‘N’ Roll Addiction EP. While the turnout for Löve Razër‘s gig in sleepy Oshawa could have definitely been better, it was a lot of fun seeing a very good band in a rather quaint and small venue given that I suspect that the group will likely be making a lot of noise in the future. The best part about this in that in less than 12 hours, I will get to see Löve Razër delivering their enthusiastic sleaze filled rock n’ roll once again but this time at Cherry Cola’s in Toronto. If you get the opportunity to catch Löve Razër play live, make sure to grab it! 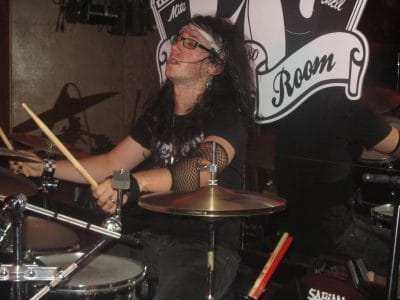