I have created a concert bucket list, and tonight I was able to cross another name off that list. Tonight, I got to see George Lynch play his guitar live. Ever since I saw him on MTV with his skull guitar in the video “Kiss Of Death” from Dokken’s Back For The Attack, I became a fan. I instantly started buying his discography and enjoyed most of what I heard. When he decided to leave the group and start Lynch Mob, I knew I had to buy the album as soon as I heard the song “Wicked Sensation.” Man, did that song kick ass! Ever since then, Lynch has been busy putting out Lynch Mob albums, solo albums, rejoining Dokken, more Lynch Mob albums, and other projects with well-known artists.

On Friday, August 14th, Lynch Mob invaded Pickle Park in Fridley, Miinesota. The opening bands consisted of local artists from the Minneapolis/St. Paul area. Metal Ships opened the show but I was running late and missed most of their set. They are a female fronted group that got together in 2013. They consist of local talent from cover bands who were ready to start creating their own music. 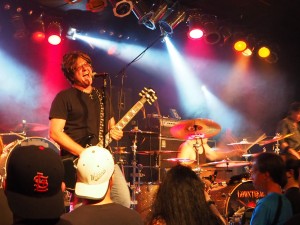 Pickle Park does not have the biggest stage, so when it came time for Downtread to start, the drum kit was front right on the stage since Lynch Mob’s set was already set up ready for the night. With the drums taking up a lot of room, I was a little worried how Downtread‘s stage show was going to be. Were they just going to stand there and play their music, or were they going to make the most of it? They made the most of it. When Downtread took the stage, they started off testing the levels and sound and proceeded with the first song. They started the show off with “Silent Location.” Drummer Eric Domagall started yelling in his mic “This shit isn’t working! It’s not fucking working!” The band kept on playing while Domagall kept yelling “fuck” about ten times. Right then and there, I knew this was going to be a great show! When the drummer is that full of energy and hitting those drumheads that hard, the rest of the band will feel and provide the same energy. 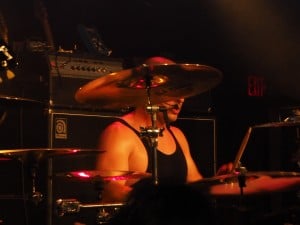 Vocalist/lead guitarist Brett Petrusek did a great job owning the stage with the rest of the band: bassist Robert Berg, guitarist Marc Paradise, and Domagall. It wasn’t until the third song “Next Victim” that the crowd of 300 started to get into it. I was a little surprised that it took that long since the band was ripping it up on stage. The first three songs were filled with great riffs, guitar solos, and Domagall spinning, flipping, and breaking his sticks because he was hitting them so hard. Domagall reminded me of Sevendust‘s Morgan Rose with the way he was playing and filling in with vocals. “Lost My Way” had Berg’s bass thumping through speakers showing off his talents. After the song, Domagall announced that they have copies of their brand new, unreleased album The War Behind The Wolf. It is “for sale” or “for whatever price you want to pay, take it for free if you want!” Then Petrusek chimed in and said, “Whatever you want to pay for the album, but a little donation would be nice. Pay what you want.”

At this time, it was getting very hot in the venue. So hot that Petrusek and Domagall mentioned it quite a bit during their set. It got so bad that they asked for the main spotlights to be turned off because of the heat coming from them. They proceeded to finish their show without them. Despite the almost unbearable heat, Downtread kept the show and crowd alive. They filled their set with songs from their two previous albums (144 and Stand Your Ground) and a few from their soon to be released album. All songs were hard hitting rock songs with some great guitar work by Petrusek along with his clean and raspy voice. With all of the shows that I have seen in Minnesota, I am surprised this was the first time I have seen them and with the new album to be released soon, I will not want to miss their next show. 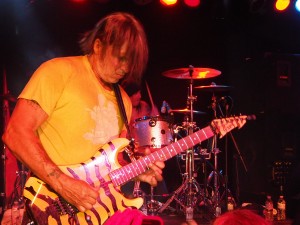 Now that Downtread got the crowd going, it was time for Lynch Mob. This time, more people started getting closer to the stage, and the crowd started to fill up on the left side of the stage where Lynch would be playing. As soon as Lynch walked up on stage, the crowd started to scream. The band went right into “She’s Evil But She’s Mine.” Singer Oni Logan was sounding great with his powerful voice that was spot on that night. Not only was Logan sounding great, Lynch’s guitar playing was sounding great as well! The next song, “River of Love” really got the crowd going. They did not have any stage props, but Lynch had a couple small amps, while the bass player Sean McNabb had three tall stacks. After the second song, Lynch got the mic and told the crowd he felt sorry for them because it was so hot and that he hopes it doesn’t get any worse. Meanwhile, he had a fan blowing on him the whole show, blowing his hair away from his eyes to see what he was doing with the guitar. 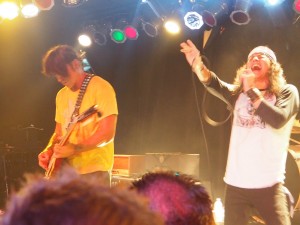 Logan was doing a great job taking charge of the show. He did spend most of the show in front of the mic stand, but he was moving his arms with the music. He did take the mic off the stand a few times to walk across the stage, but it wasn’t for long periods of time. “We are going to jam on some blues for a little bit. Is that ok with you?” asked Logan. The crowd cheered with approval. After a little blues intro, they went right into “All I Want,” a bluesy song off their first album. Next was another track off the first album, “Hell Child.” I overheard someone in the crowd wonder if they were going to play the whole album? His question was answered with the next song “Subliminal Dream,” a song off of their 2014 album Sun Red Sun. It wasn’t until after that song that Logan introduced the rest of the band. Drummer Jimmy D’Anda was nicknamed “BulletBoy” because he was the drummer for the BulletBoys for their first three albums. Bass duties were played by Sean McNabb who has been with many artists and was even part of the TV show Sons of Anarchy.

Lynch then grabbed his classic, tiger stripped guitar. He ripped into the opening riff of “Believers of the Day,” another track off Sun Red Sun. Anyone who knows of Lynch knows he has had that guitar for a long time. Long enough to save his life, he said after the song. He went on to tell the crowd that the guitar stopped a bullet, from his ex-wife and he joked that this was probably his fault. 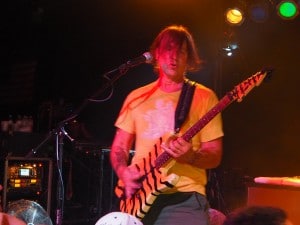 “Let the Music Be Your Master” was the only song played off the Smoke And Mirrors album. Logan then asked the crowd if they knew of Lynch’s personal past. Lynch proceeded to do gestures that consisted of tapping his arm (reference for doing heroin), pretending to snorting coke, thrusting his hips, and drinking alcohol. That got some chuckles from the crowd. Everyone knew Lynch used to be in Dokken and Logan asked if we wanted to hear some Dokken songs. The crowd was more than ready to hear some classics from Lynch’s past. The next three songs were Dokken tracks: “Into The Fire,” “The Hunter,” and “Mr. Scary.” It was a great experience watching Lynch shred his guitar during “Mr. Scary.” I have always wanted to hear that song live and enjoyed every moment of it. I always wondered how the Dokken songs would sound with Logan‘s voice and was pleasantly surprised. He did a fantastic job handling the vocals for those classic songs.

After the trio of Dokken tunes, Logan said it was time for the song that started it all for Lynch Mob: “Wicked Sensation.” Fans were loving every minute of this track. After the song was over, the band took a bow and left the stage. With the lights off, we were hoping for one more song. It was so hot in there, no one knew if they would come out and play an encore. D’Anda had to take a few breaks during the set to just recover from the heat. After a few more minutes, the band came back on stage and tore into the Dokken classic “Tooth and Nail.” The crowd went crazy, singing every word of the song with Logan. Once the song was over, both Lynch and Logan thanked the crowd for ‘hanging in there’ during the extreme heat and we later found out the air conditioner broke down.

This line-up of Lynch Mob sounded great live and had great chemistry on stage. I just hope they can keep this line-up together for years to come. Next on my bucket list is Eddie Van Halen and I get to cross that off in a few weeks when I get to see Van Halen live for the first time.

Had to use my other camera for the last 2 songs (lesser quality). *Most of the stage lights were off due to the 90*F heat and no A/C. *At GB Leighton’s Pick…