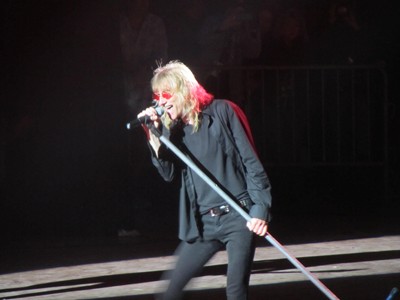 M3 ROCKS DESPITE RAIN AND TRAGEDY

To say that I was excited heading to my first “rock festival” would be an understatement. I was completely pumped as I took my flight (with a stopover) from Toronto to Baltimore. As a first timer I made the rookie mistake of banking that the M3 Rock Festival would start at 7pm, so my flight into Baltimore was only scheduled to arrive at 5:47 (my buddy had booked a flight for the day before). Once the M3 schedule came out, I realized that there would be no way that I would make Winger‘s set, which was scheduled to start at 6pm, and certainly not opening band Bad Seed Rising, who were slated to start 50 minutes beforehand. Nevertheless, I was hoping to still make it in time for Lita Ford‘s set, which was scheduled to start at 7pm. 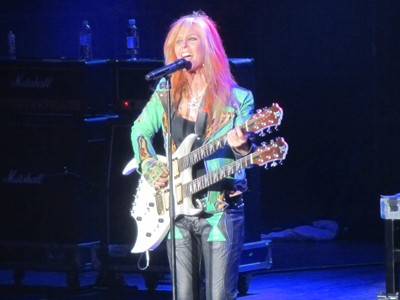 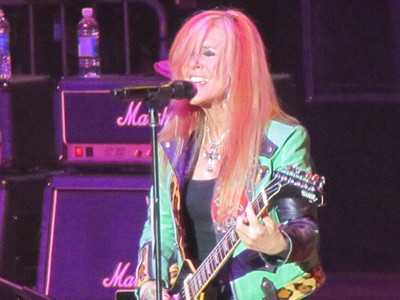 I arrived at the Baltimore airport whopping 25 minutes earlier than expected, unfortunately the heavy rain, congested traffic on certain highways, and my general poor directional skills resulted in my missing three of Lita Ford‘s songs, which I later learned were “The Bitch Is Back”, “Hungry” and “Relentless”. I arrived mid-way through one of my favorite Ford tracks — “Gotta Let Go”. Lita Ford looked simply fabulous and it is hard to believe that this beautiful woman has already reached the age of 55. Not only did she look really good, but she sounded pretty good as well as I thought her vocals were, for the most part, spot on with perhaps a tinge of a hoarse voice. Before you know it, former Runaways bandmate Cherie Currie showed up on stage dressed stunningly, in what seemed like black leather from head to toe. I can’t remember if Currie was onstage for “Living Like A Runaway”, but she definitely sang on the three next Runaways tracks dug up for the occasion — which were “Queens Of Noise”, “American Nights” and the easy sing along classic “Cherry Bomb”. 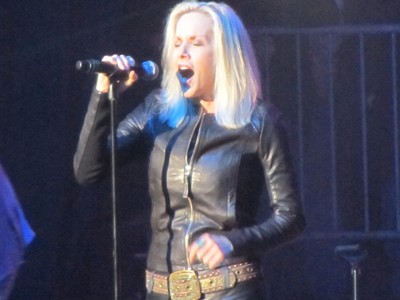 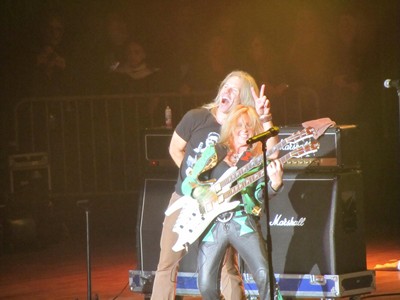 Once I saw Cherie Currie come onstage I was hoping that we might also see Joan Jett join in to make the evening extra special and a Runaways reunion one step closer to reality. The reason for that was the recently posted photo of Jett, Ford and Currie at the Revolver Magazine Golden Gods Awards Show from the night before. Alas, Jett did not appear, and I doubt a Runaways reunion with her will ever happen. Nevertheless, it was simply awesome to have Ford and Currie playing together once again. Once Currie left the stage, Lita pointed out that the next guest should be Ozzy Osbourne as she launched into the gorgeous ballad “Close My Eyes Forever”, which had the crowd singing along. Ford closed off her set with a spirited version of “Kiss Me Deadly”, which once again spurred lots of singing from the crowd. During that last song Warrant vocalist Robert Mason made a surprise appearance — I’m not sure whether this was a “planned” surprise, as Mason seemed a little lost at times on the stage. Overall, I thought that Lita Ford put on an awesome performance!

Next up was a band that apparently hadn’t played a show on American soil in more than five years! Extreme took the stage after Lita Ford with their funk-grooved hard rock sound, and the first thing that popped into my mind was how fit lead vocalist Gary Cherone and guitar wizard Nuno Bettencourt both looked. The second thing that struck me was how good of a guitarist that Bettencourt is — that guy can play! Although Bettencourt is known for his guitar virtuosity, I still think that he is one of the great underrated guitarists out there. Cherone meanwhile was a bundle of energy out there as he was constantly moving around making it difficult to get a good photo of him throughout the band’s set. 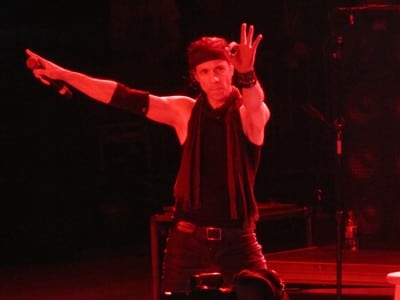 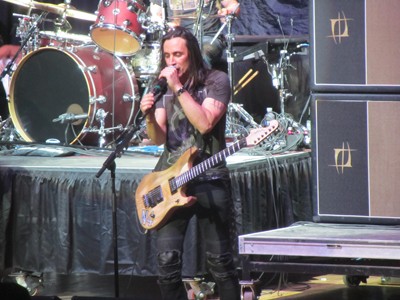 I have never been a big Extreme fan and only own their most popular album ‘Extreme II: Pornograffitti’. Given that I feel that Extreme‘s songs — aside from their monster hits “More Than Words” and “Hole Hearted” — need a few listens before you can truly appreciate them, I was not that keen on anything played by the band that was not from ‘Extreme II: Pornograffitti’. Not surprisingly, my favorite Extreme songs of the night were “Decadence Dance”, “It’s A Monster” and “Get The Funk Out” — along with the band’s two biggest hits.

There were some funny moments during Extreme‘s set such as when Bettencourt started the U2-like riff for, I believe, “Play With Me” and his sound was cut off. The guitarist went on to state that this was the second time he played that guitar riff and his sound was cut off. Later on, he stated that his guitar tech had just advised him that the sound disappeared due to an inadvertent pulled plug. At times throughout the show you could actually see Bettencourt‘s breath given that it was so cold outside. 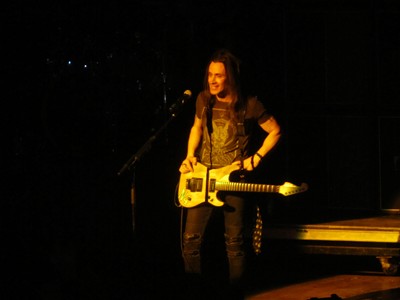 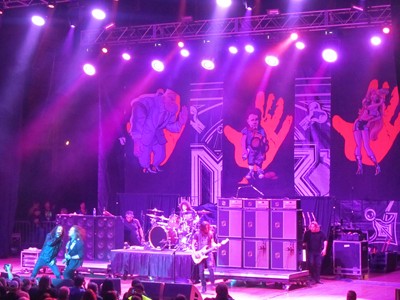 Extreme is always one of those bands that will receive a strong reception from any crowd because they have two monster hits in their repertoire that have audiences singing along to every word — including the M3 crowd on this night. It was a smart move on Extreme‘s part to play their top five Billboard hit “More Than Words” as their seventh song and a few songs prior to their show closer, and other top five hit, “Hole Hearted” — spread those hits around! Although I think that Extreme put on a great show, I won’t be in any hurry to discover the rest of their discography.

Next up was Baltimore’s finest Kix. If there is one band that receives great local support, it has to be Kix. After the first two songs played — blistering renditions of a new song called “Can’t Stop The Show” (to be released this July) and “No Ring Around Rose” — frontman Steve Whiteman gave the honest assessment that the band does not get to play on such big stages all the time, and that if Kix were the last band to play on M3’s stage on this night it was clearly due to the Baltimore fans who raised a small raucous when they did not get to do so last year. Whiteman also pointed out that there were no headliners on this night — but that is really not true! Kix was clearly the headliner for day one of the M3 Rock Festival. Judging from the crowd’s reaction, most of the people were quite into Kix — not surprising given that Baltimore, Maryland is the band’s home turf. 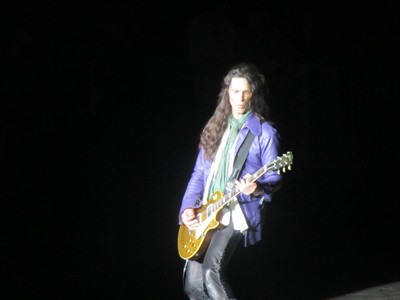 I, for one, had heard of Kix a long time ago but could not remember any of their songs when I decided to go to M3. Accordingly, I bought a copy of the ‘Live In Baltimore’ CD/DVD beforehand to get familiar with M3’s Friday night headliner. As Gary Cherone pointed out during Extreme‘s set, Kix is one of the all-time underrated metal bands out there and I could not agree with him more upon having the pleasure of seeing them play live. Whiteman has to be the equivalent of metal’s Mick Jagger — as the former is constantly dancing, prancing and moving around in his own quirky ways. He also has the same rail thin profile as Jagger and that can likely only be from all of the energy and cardio that he expands on stage. There are not many singers out there that can move around while singing as much as Whiteman and still be spot on with their vocals. 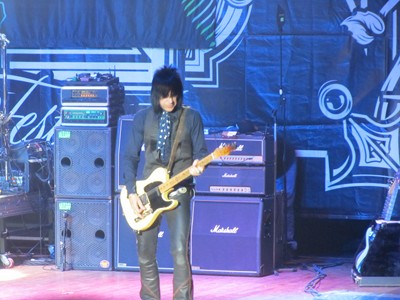 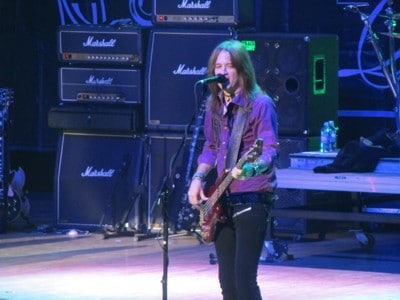 Kix played two new songs from their forthcoming studio album — their first in 19 years. Whiteman joked that he hoped the new CD would “not suck”, but he has nothing to worry about based on the tracks that were delivered at M3. The band benefited from playing on one big stage, and given Whiteman‘s propensity to move around, Kix (or rather, the singer himself) made good use of the extra space. Whiteman has to be one of the great rock frontmen out there as he commands the audience and at one point got the crowd to answer, “You’re welcome”, every time he said, “Thank you” — which was quite often. The energetic frontman eventually explained that this started at a show in North Carolina where they are very polite — apparently one North Carolina fan responded with, “You’re welcome”, after one of Whiteman‘s, “Thank yous”, and ever since he has been getting entire audiences to do the same. 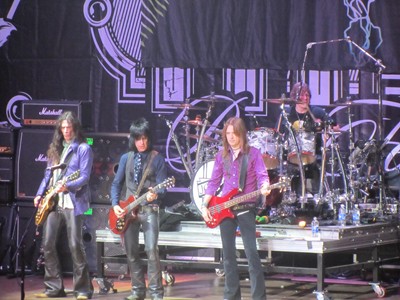 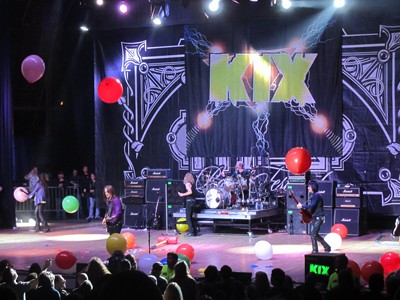 Kix put on a clinic on how to deliver a great show and it seemed like just about everybody in the audience knew all the words to the songs. Highlights for me included the rarely played “Body Talk”, perennial classic “No Ring Around Rosie”, “Girl Money”, and of course “Blow My Fuse”. The most surprising song of the night for me was “Don’t Close Your Eyes”, which sounded great live — for whatever reason I usually skip the song when listening to it from a CD. The one thing that I thought could have been improved upon was the ending. I know that for Kix fans Whiteman‘s ramblings during “Yeah, Yeah, Yeah” are quite enjoyable, but I found that it took away from the band’s momentum during their show closer in which the singer brought out a couple of huge white plastic bags filled with oversized balloons. He then proceeded to break the bags with a big “hammer”, however it took him a while to do so and some of the balloons stayed in the plastic bag when he was kicking them into the audience.

At the end of the day, Kix put on a kick ass performance and will likely be closing day one of the M3 Rock Festival in 2015!

Once finally back at the hotel, I found out that what seemed like an excessive amount of big police vehicles in one particular area at the festival parking lot — which was free to park in, thank you Merriweather! — was because a pedestrian (likely a concert attendee) had sadly been fatally struck by a vehicle — a sad and sobering ending to one hell of a great evening of ’80s metal music! I know that the music and atmosphere will be electric for Saturday’s show, but sincerely hope that there are no more tragedies to read about with respect to the M3 Rock festival!