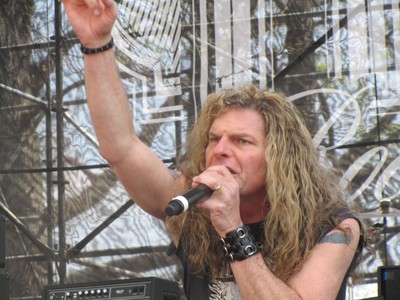 EVERY BAND IS BRINGING IT (PART 1)

After what felt like torrential downpours during the first night, day two of the M3 Rock Festival was blessed with blue skies and sunshine — at least for most of the day. My buddy (The Meister) and I arrived at the Merriweather Rock Festival around 10:45am and enjoyed the venue’s free parking once again — if we were in Toronto, parking would have cost at least $20, if not more! We walked around for a little bit before heading to the Side Stage to catch the first of 14 bands that were scheduled to play that day. The Side Stage was located on the bottom end of the other side of the hill and consisted of a no-frills general admission area on grass along with some tall and large trees. The Merriweather Rock Pavilion is designed like many amphitheatres, such as Toronto’s Molson Amphitheatre, with a small general admission/seated area on the floor, a large seating area that expands in width and height the further out you go, and finally a lawn section at the top. The top section would be the ‘top of the hill’ so you should be able to picture where the Side Stage was located. 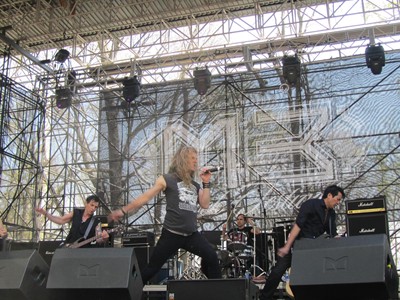 The first band of the day was Heaven’s Edge with a start time of 11:40am. I was not familiar with the band aside from watching, apparently, their only video (“Skin To Skin”) a few days prior and knowing that they had released one album in the late ’80s. Nevertheless, there were lots of people waiting for them to perform, including two fans that flew in from Brazil to catch the M3 Rock Festival! From the video that I had viewed a few days prior, I noticed that the Heaven’s Edge members were very energetic and the lead vocalist, bassist and two guitarists performed many energy filled choreographed moves. Surely, they would not perform these tricks more than twenty years later — I was mistaken. Heaven’s Edge kicked off day two of the M3 Rock Festival with “Play Dirty” followed by “Skin To Skin” and “Rock Steady”. Just like back in their golden — or younger — days, frontman Mark Evans, bassist George Guidotti and guitarists Reggie Wu and Steve Parry were jumping around and landing on the ground in unison — Evans also did many leg kicks a la David Lee Roth. 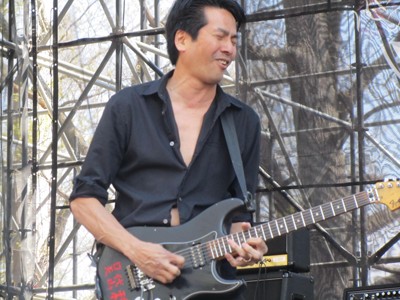 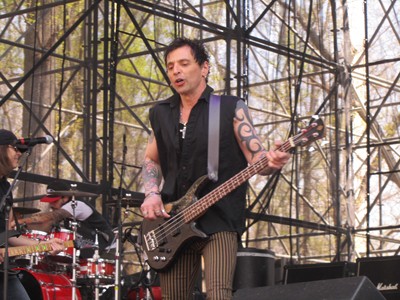 Unfortunately I was only able to stay for three songs of Heaven’s Edge‘s set since the one band that I did not want to miss — Keel — was scheduled to play at noon on the main Pavilion Stage. The M3 Rock Festival had advertised that there would be no overlapping stages, and although the situation was for the most part rectified later on in the day, I missed a large part of the first three bands on the Side Stage due to overlapping issues and having to choose one band over the other. When the timing of the two stages worked well together, concert attendees had about five minutes from the end of a band’s set at one stage to make it to the other to catch the start of another group. From the little that I saw from Heaven’s Edge I was quite impressed and I will definitely have to locate a copy of that band’s debut record once back on Canadian soil.

Growing up, I had always been a massive Keel fan although it seems that I never physically owned any of their albums until purchasing the 25th anniversary edition of the ‘The Right To Rock’ and the band’s latest release ‘Streets Of Rock N’ Roll’ in the last few years. Nevertheless, Keel is one of those bands for which I know — or at least, I think that I know — most of the words whenever listening to the group’s mid to late ’80s albums — even if I have not heard them in a number of years. Unfortunately for Keel, there were not a lot of people in the audience to see them at the beginning of their set as most of the seats in the Pavilion stage were bare. I blame it on the early start and the fact that there was already a pretty large crowd for Heaven’s Edge. It did feel weird leaving the opener’s set only three songs in, but both The Meister and I did not want to miss Ron Keel and company. 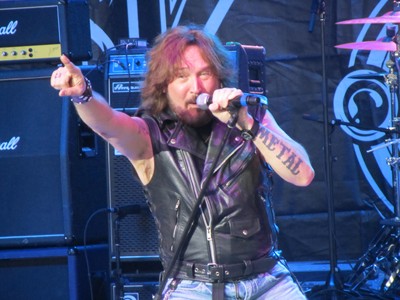 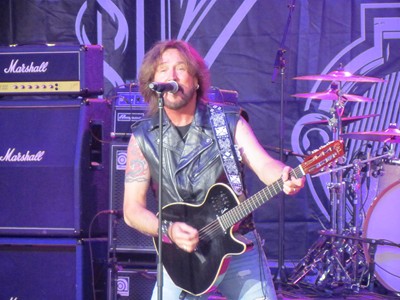 Keel opened their set with “Come Hell Or High Water” from their latest CD ‘Streets Of Rock N’ Roll’. Vocalist Ron Keel sounded great right from the start, and emphasized to the crowd that this was the band’s 30th year anniversary. Although Keel only performed a seven song set, their various albums were well represented with just about one song from each record — including “Speed Demon” from ‘Lay Down The Law’, the title track from ‘The Right To Rock’, “Because The Night” and “Tears Of Fire” from ‘The Final Frontier’, “Somebody’s Waiting” from ‘Keel’ and the soundtrack song “Rock ‘N Roll Outlaw” (a live version can be found on ‘Larger Than Life’). It was cool to see Stryper guitarist Oz Fox at the bottom of the stage taking most of Keel‘s set in. As Ron Keel belted out the intro scream to Keel‘s show closer “The Right To Rock” — which he pulled off magnificently — I could not help but think that had he known that he would be singing that song 30 years later, he would have held back on that intro scream when he first recorded it. “The Right To Rock” is one great metal anthem, and the strong M3 crowd sing-along during the song’s chorus and fist pumping in the air were testaments to that fact. 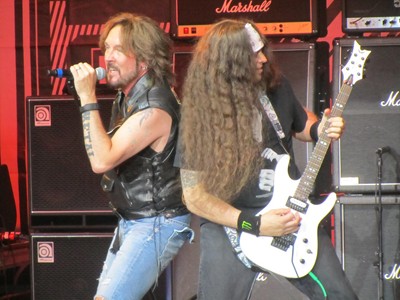 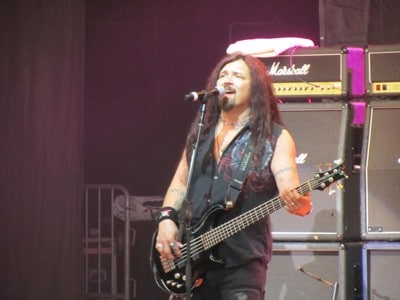 What became quite evident to me early on during day two was that unless some band screwed up the songs or did not play well, it was likely that the groups that I would enjoy the most would be the ones I was most familiar with. Given that, it was my first time seeing Keel — one of my favorite bands from my childhood — and since I knew all the songs they played quite well, and given that the band sounded great, it goes without saying that I thought Keel put on a fantastic performance. One thing that also became evident was that all of the M3 concert attendees had different bands that they wanted to see, and the one that put on my least favorite performance (Slaughter in my case) could be someone else’s favorite.

Once again, due to overlapping issues, I only caught the three last songs from John Corabi‘s set. It was really ‘Corabi and the kids’ playing, since the rest of the band members looked to be in their early 20s at most. Corabi certainly does not have the “look” of any of his other ’80s contemporaries — instead he looks more like someone from the ’60s Flower Power/hippie movement. His brand of rock ‘n’ roll is also one that I have not really gotten into that much. Although I was familiar with two out of three songs that I heard from Corabi — given that “Uncle Jack” and “Hooligan’s Holiday” originate from the one Motley Crue album he sang on — it had been so long since I heard those songs that they essentially felt like new ones to me. Since it was Corabi‘s birthday, he was treated to a “Happy Birthday” song from the crowd. 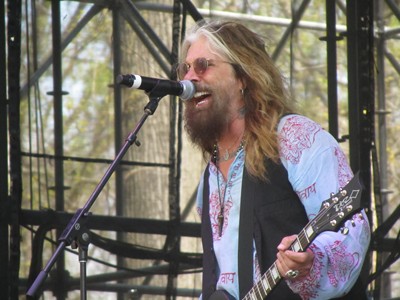 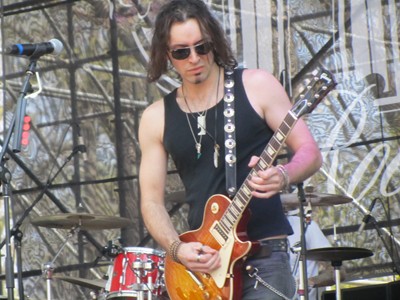 John Corabi and his band sounded good, but again, his brand of songs is not what I usually listen to so I can’t say that I was heartbroken in missing a good portion of his set. If anything, that is the beauty of the M3 Rock Festival, given that there were a number of bands on the bill that three months ago I would not have considered seeing play live — such as Kix, John Corabi, Autograph, Femme Fatale, Heaven’s Edge and Night Ranger. However, due to being at the festival with no other performer to see and hear at the time, I ended up checking out all of those bands and there are a few that I will now be going to see live on a regular basis whenever they come to town.

It was now back to the main Pavilion Stage to see Jack Russell’s Great White. I had seen Russell‘s version of Great White play back in June of 2012 but it seems that half of his backing band had been replaced. The band opened with “All Over Now” followed by “Desert Moon”. Russell still possesses his great blues filled pipes but he continues to look a little beat up from his various health problems and battles with addiction. It must have been quite a different experience for the band to play for so many people after having to go through the presumably humiliating experience of playing in front of about 10 people in an 8,500 capacity stadium in New Jersey less than two weeks ago. To be fair, that disastrous gig does not appear to be the band’s fault, although I wonder why they would have agreed to play in an arena right after a football game had taken place. 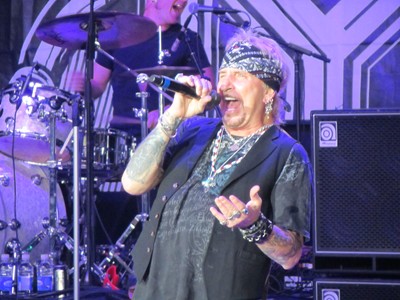 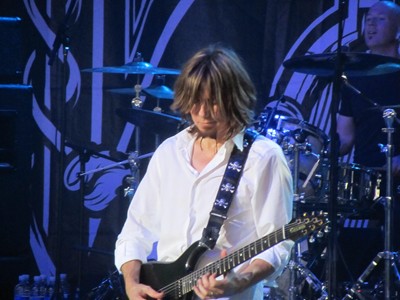 One good thing about the set played by Jack Russell’s Great White was all the “hits” that were played including “Save Your Love”, “Lady Red Light” and “Rock Me” from the coming out album ‘Once Bitten’ — the only song that I wished that Russell and company had played was “Face The Day”. The band closed out their spirited set with the sing along classic “Once Bitten Twice Shy” which was slightly hampered at times by poor sound emanating from the keyboards. Jack Russell’s Great White was not one of the bands that I really wanted to see at M3, but obviously others felt otherwise as I was told by one Torontonian that Russell was the main reason that he was attending the festival.

Next up was Femme Fatale. Again, due to the overlapping issues, I missed a few of the songs from the all-female band’s set. Although some of the Femme Fatale band members are, presumably, in their 40s they almost all looked quite “hot”. In particular, vocalist Lorraine Lewis has apparently done a good job over the years of taking care of herself as she looked sexy and ravishing while walking in an almost panther like fashion on the outdoor stage. Lewis pointed out that this was Femme Fatale‘s first gig on the east coast of the United States in about 25 years! 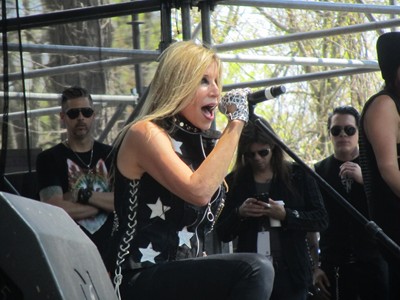 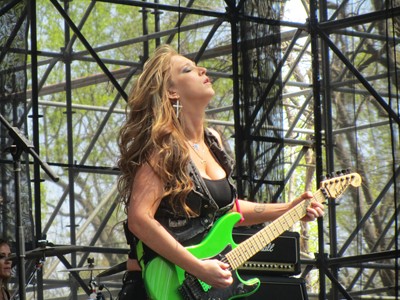 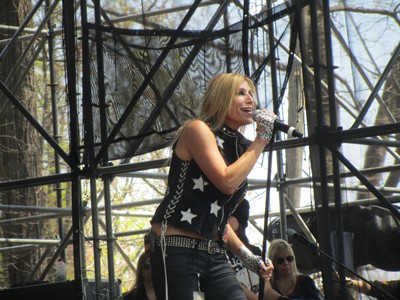 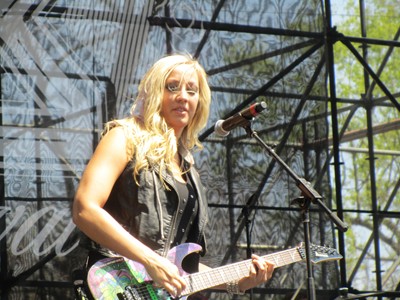 Femme Fatale was another artist that I was, for the most part, not familiar with aside from a few YouTube videos I saw from their recent Monsters of Rock performances and knowing that they only released one album. Unfortunately, the group’s brand of music is “poppier” sounding and more keyboard laced than what I usually like to listen to so none of the first three songs I heard were really enticing to me. However, Lewis announced at one point that Femme Fatale had recorded an entire second album back in the day that was never released and that they were going to perform one of the songs from that now forthcoming CD for the first time ever. “Lady In Waiting” was a pleasant surprise and I will likely purchase their long lost album through FnA Records whenever it comes out. Given that their set was starting to come close to Stryper‘s 2:35pm start time on the Pavilion Stage, and needing a little extra time to purchase lunch, I left Femme Fatale‘s performance before it was finished.