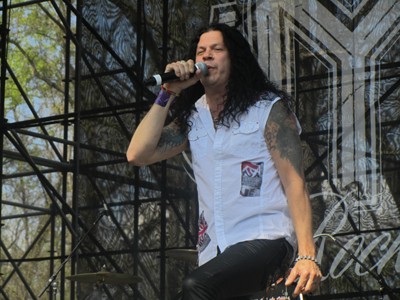 When I saw the M3 Rock Festival schedule for day two, I noticed right away that I would have to make some hard choices in the mid-portion of the day given that Stryper, Jake E. Lee’s Red Dragon Cartel and Queensryche were playing back to back — albeit one of them on the Side Stage. Throw in Sebastian Bach and the afternoon of day two was, for me, the ‘can’t miss’ part of the day. Given that I thought that there would be some overlapping based on the performance times, I was not looking forward to having to pick which band’s show to cut short in order to see another group’s complete set. 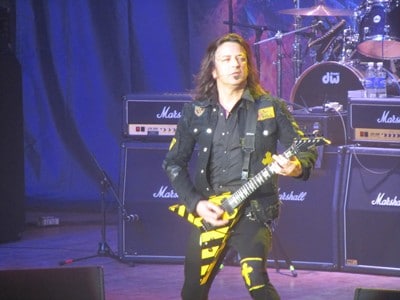 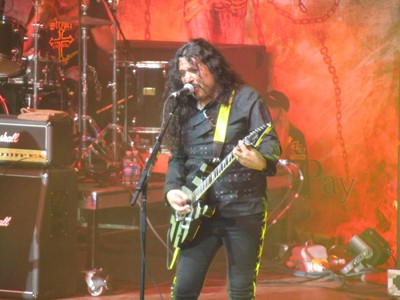 Stryper have become one of the bands that I really look forward to seeing play live after I witnessed their absolute killer show back in Toronto last July (read the review of that show here) and given the positive Christian based message that their songs provide. Lead vocalist Michael Sweet and company did not disappoint at the M3 Rock Festival as the band began their set by cranking out a number of hits from their ’80s glory days including “To Hell With The Devil”, “Calling On You” and “Free”. Just like the band’s show in Toronto, frontman Michael Sweet made reference to the ’80s, but thankfully had some somewhat different stories to tell including that back in that time you could request for a video to be played by MTV simply by calling them, and that guys had bigger hair than women! As usual, Sweet sounded amazing — aging has apparently not affected his vocal pipes in any way. 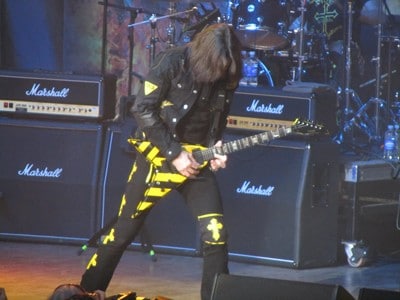 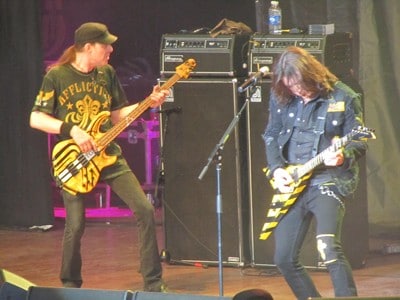 Although I am a big KISS fan, I am not that fond of their song “Shout It Out Loud” — having grown bored of it after hearing it a million times. However I found myself singing along loudly while the Christian rockers played their excellent and spirited version of the song. One thing about Stryper is that the band seems to have gotten heavier since reforming more than ten years ago. That was certainly evident in their choice of songs and the two new songs played at M3 — one of my favorites, “Legacy”, and the title track to their latest record ‘No More Hell To Pay’. Frankly, I am pleased with the band’s heavier direction having never been that much of a fan of their more pop-oriented ’80s version. Stryper appears to not play their biggest hit — the ballad “Honestly” — anymore but I thought that it would have been a good move for the band to perform it at M3, not because I wanted to hear it, but given that not all of the festival attendees were there to see Stryper (or any other band for that matter). This was evident when the sing-along portions of the songs that Michael Sweet might have an audience sing at regular shows didn’t go over that well at M3. It seems that at M3, the best way for a band to get a strong reception is simply to play their biggest hits. In any case, I was pleased with Stryper‘s choice of songs and can’t wait to see them in Toronto in early June!

Given that I stayed for Stryper‘s entire set, I was slightly worried about missing the start of Red Dragon Cartel. If you were at the M3 Rock Festival on day two and saw someone walking very fast from the Pavilion Stage to the Side Stage around that time, it was likely me! I had the pleasure of seeing Red Dragon Cartel play just sixteen days prior in Toronto (read the review of that show here) and was very much looking forward to seeing them live once again and I was able to get a fairly decent spot near the right of the Side Stage despite sticking around to see Stryper‘s entire show.

Red Dragon Cartel was even better at M3 than they were in Toronto! The band opened their set with “The Ultimate Sin”, a cover from legendary guitarist Jake E. Lee‘s days with Ozzy Osbourne, and you could feel the energy and electricity in the crowd right from the start. The band then launched into “Deceived” and “War Machine”, two songs from their self-titled debut album. Vocalist Darren James Smith seemed more comfortable on the big M3 stage than he did in Toronto — I suspect he was a tad nervous in Toronto, playing his first hometown show with his new band. Smith was joking around and always had a big smile while performing on the Side Stage and at one point he jokingly pointed out that the band was heading to Europe but that the rest of the tour would likely suck after experiencing this gig — well Darren, the same goes for anyone who attended the M3 Rock Festival. After getting to see 14 bands in one day, what a downer it will likely be to only see one band of that caliber at a concert. 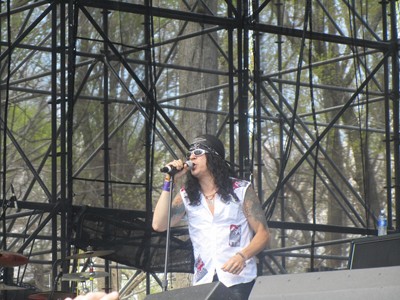 Just like in Toronto, Smith paid tribute to Lee‘s former partner in crime, deceased Badlands frontman Ray Gillen. Red Dragon Cartel then launched into “High Wire” and it seemed that the crowd simply went nuts — I know I did, or at least it seemed that I did. The crowd’s enthusiasm for “High Wire” was well summed up and graphically described by one fan that I was standing next to when he stated with a big smile, “I got a boner on my boner”. Red Dragon Cartel closed out their set with two of their own songs — “Shout It Out” and “Feeder”. I was surprised that the band did not end with a cover of Ozzy Osbourne‘s “Bark At The Moon”, but perhaps the group had to adhere to the tight time schedule imposed by the M3 Rock Festival. For instance, you could see a huge clock on the right side of the Pavilion Stage which likely served as a reminder of when to wrap up a set for whichever bands were on that stage. Although Red Dragon Cartel only played six songs, they were all good ones and I was actually pleased that they played four of their originals — showing that they are much more than a cover band playing songs from Lee‘s storied past. Overall, I think that Red Dragon Cartel put on one of the best performances at M3.

With Red Dragon Cartel‘s performance coming to a close, it was time to rush back towards the Pavilion Stage to see the Todd LaTorre led version of Queensryche. I arrived halfway through the opening song “Nightrider”, which I admittedly was not that familiar with since I have never been the biggest Queensryche fan on the planet. The band then launched into “Breaking The Silence” and I was simply blown away by how good “new” vocalist LaTorre sounded. When Stryper played I had thought Michael Sweet had the best set of pipes at M3, but LaTorre was even better — handling the tough early Geoff Tate led material with ease. All of the songs played by Queensryche sounded awesome and I found myself singing along to most of them. Back in June of last year, I had seen Geoff Tate‘s version of Queensryche play at Casino Rama, which is located about an hour’s drive north of Toronto. Despite not having heard LaTorre live by that point, I declared that Queensryche without the voice behind it was not ‘Queensryche’ (read the review of that show here). I am man enough to admit my mistakes! Clearly, the LaTorre fronted version — also consisting of guitarists Parker Lundgren and Michael Wilton, bassist Eddie Jackson and drummer Scott Rockenfield — is indeed the real version of Queensryche. Having the band lose their main face and original voice in Tate does not mean that this version of the band is not Queensryche. 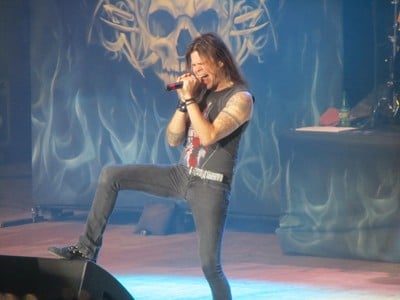 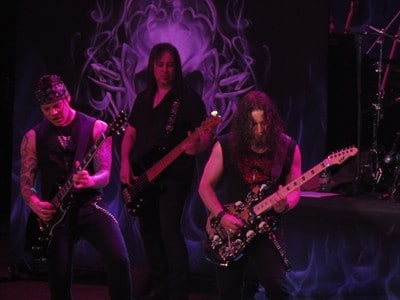 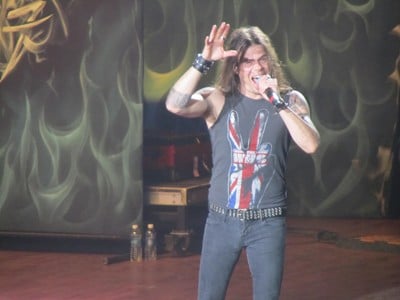 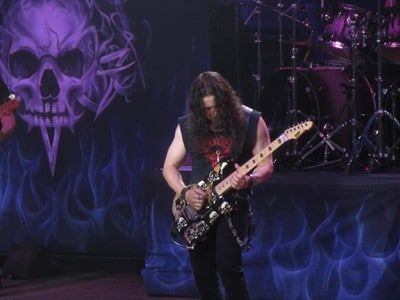 Queensryche‘s choice of material was also excellent, with a wide range of songs played from their golden years including “Empire” (one of my personal favorites), “Eyes Of A Stranger” (which was still stuck in my head days later), oldie but goodie “Warning”, and show closer “Take Hold Of The Flame”. The one new track that was played — “Where Dreams Go To Die” — was also a good one. Although I had previously purchased Queensryche‘s self-titled CD with LaTorre at the helm, I had never been able to really get into it, but I will definitely have to give it another chance. Early polls on one M3 FaceBook site seem to indicate that Queensryche was the band who will likely garner the most votes for favorite performance in 2014. Although there were a few other bands’ performances that I liked better, I completely understand why many people would feel that Queensryche indeed put forth the festival’s best performance.

For the last few months, my buddy The Meister had been raving on and on about Autograph. I never got into the band back in their heyday although I was quite familiar with, and enjoyed, their video hits “Turn Up The Radio” and “Blondes In Black Cars”. I ended up purchasing Autograph‘s ‘Sign In Please’ and ‘Loud And Clear’ records in advance of the M3 Rock Festival so I was actually familiar with all of the songs played during their set. What I like about the Simon Daniels‘ fronted version of Autograph is that the new singer and guitarist provides a harder edge and heavier feel to the songs. Autograph were the biggest surprise for me at M3 — I really enjoyed their set, so much so that I ended up staying for their entire show and risked missing the opening of Sebastian Bach‘s appearance on the Pavilion Stage. 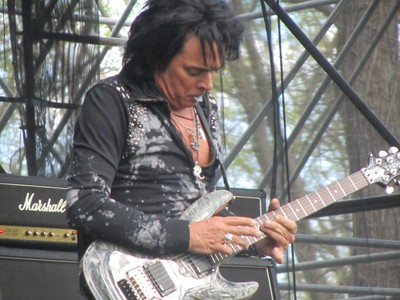 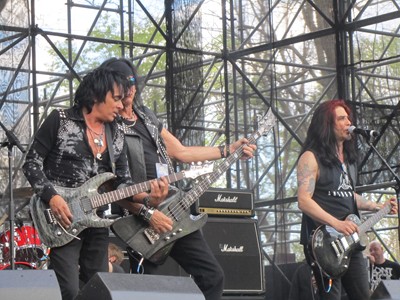 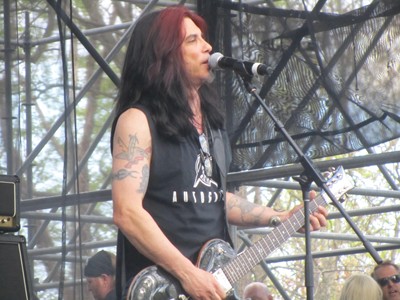 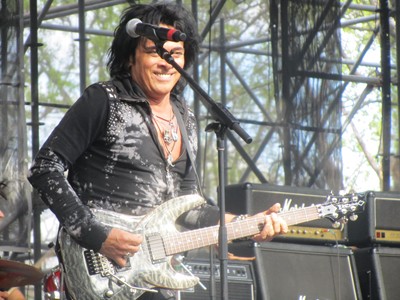 Every song that Autograph played was a good one, with my favorites being “Dance All Night”, “Send Her To Me”, and the band’s two biggest hits, “Blondes In Black Cars” — which I had not heard in over 15 years yet knew most of the words to — and the only possible show closer “Turn Up The Radio”. Autograph were so good and such a pleasant surprise that I will go see them play live again when they come to Toronto in May rather than the Metal On Ice concert that I was originally planning to see.