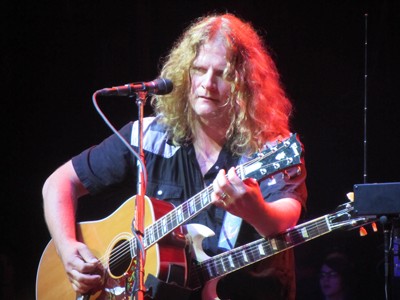 At the tail end of Autograph‘s excellent set, and after taking more than 250 photos during day two of the M3 Rock Festival up to this point, my camera’s battery life was suddenly almost at empty. I knew that I had to pace myself, photo wise, to make it through five more bands during the rest of the evening. Given that Autograph‘s set was so good, I elected to take the risk of missing the opening songs from Sebastian Bach — even though he was one of the performers that I had really looked forward to see, given his excellent CD/DVD package entitled ‘Abachalypse Now’. I had previously seen Bach play live, but my memory of that show is pretty sketchy since it dates back to his 1989 Skid Row days. This means that it had been about a quarter century since I last saw the singer live — how time flies!

As my friend ‘The Meister’ and I made our way to the Pavilion Stage, we could hear a sped up version of the Skid Row classic “Slave To The Grind” being played. While I enjoyed the faster paced version on ‘Abachalypse Now’, it just seemed to be played too fast at M3. By the time that ‘The Meister’ and I got to our seats, the first thing I noticed was that Bach‘s sound was noticeably louder than any other performer that had played that stage up to now — it took one or two songs to get used to the louder volume. Oddly, the giant backdrop for Bach‘s stage was the ‘Angel Down’ album cover, which was released back in 2007 — I figured he would have brought a backdrop to promote his latest, just released, CD ‘Give ‘Em Hell’. Bach definitely performed the “heaviest” set of songs out of any performer at M3, however it felt at times like he was trying too hard to play his songs at lightning speed and as heavy as possible. 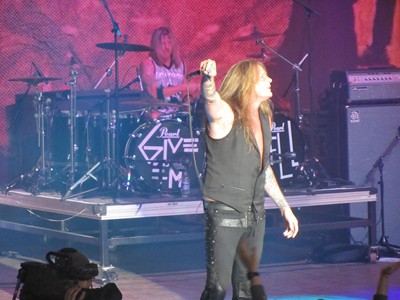 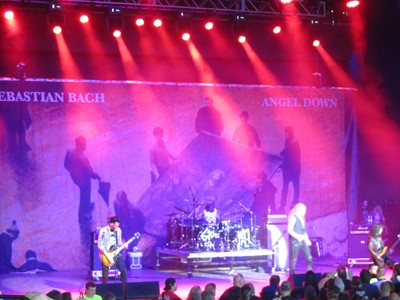 Bach‘s second song for the night was “Temptation”, from his new album ‘Give ‘Em Hell’. This was disappointing, since there are several better songs he could have played from his new release, and I would rate that song the weakest one by far during Bach‘s M3 set. Luckily, the next song delivered was a Skid Row classic. After getting the crowd to chant after him, and doing his intro scream, Bach suddenly stopped the song — pushing the crowd to cheer loudly given that he blurted something in the line of, “Are you fucking alive out there? This is the first song off the first side of the first Skid Row record! This is what you fucking want, right?” Shortly after, Bach and company launched into a fired up version of “Big Guns”. One of my favorites was played next — “18 And Life” — which I thoroughly enjoyed singing along to. 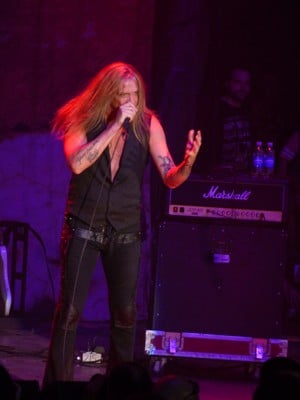 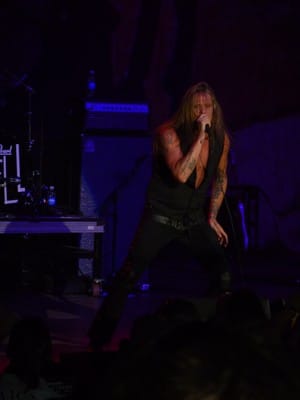 Bach displayed a lot of attitude, which was entertaining to see, and made me laugh at times — but it sometimes bordered on arrogance. For instance, he advised that he had been interviewed by “some guy” who asked him what was the difference between the state of metal in general between now and back in metal’s ’80s heyday. Bach‘s response was that they had sold out the Merriweather in 1989 and did it again in 2014, implying that there was essentially no difference between the eras. Do you really believe that Sebastian? If he truly did, he most likely would not have told the M3 audience that, “It is OK to like a new song!” after receiving a not overly enthusiastic response at the end of playing his new song “All My Friends Are Dead”. I’m pretty sure Bach did not have to say such a thing to an audience during the time that Skid Row released their first two records and performed new songs. I was not in the audience at that point, after having elected to make my way back to the Side Stage to catch L.A. Guns, but I could hear Bach‘s comments. Bach ended up playing most of the Skid Row classics, including “I Remember You”, “Monkey Business” and “Youth Gone Wild” — the latter of which I saw and heard from a big screen at the Side Stage (which was also referred to as the Festival Stage).

Next up was another highly anticipated band for me, sleaze rock pioneers L.A. Guns, and they came out firing on all cylinders. It seemed like an eternity — really almost a quarter century — since I had last seen the Phil Lewis led version of L.A. Guns live. The first, and only, time was when I was a youngster and my buddy and I won free tickets from a radio station to see the band play in Canada’s capital (Ottawa) in support of their ‘Cocked & Loaded’ album. I did end up seeing the Tracii Guns‘ version of the band in late 2011 with Dilana as the short-lived vocalist (you can read my review here), but there is no doubt which was the real and better version of L.A. Guns — Phil Lewis‘ of course, if you are wondering! 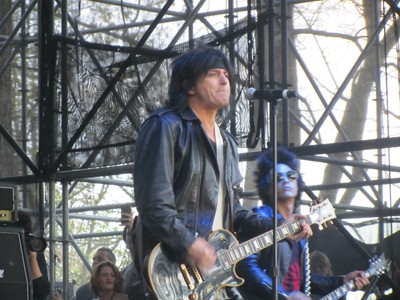 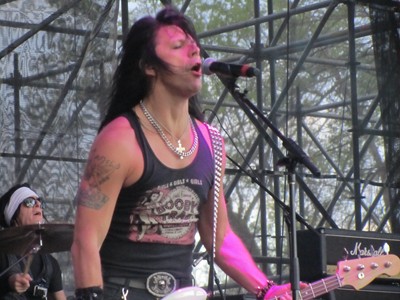 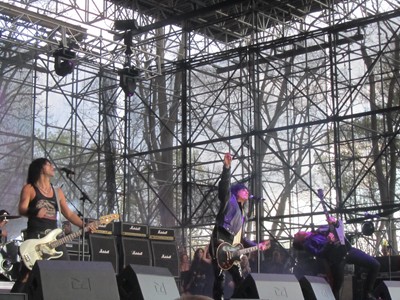 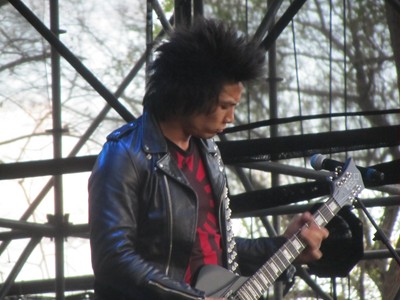 L.A. Guns opened with “No Mercy” and “Sex Action”, and the energy of the crowd was undeniable. This was my first time seeing bassist Scott Griffin and guitarist Michael Grant, and both fit in quite well. The Lewis fronted version of L.A. Guns is known for always putting on a good show and their M3 performance was no exception. I really enjoyed all the songs the band played and luckily for me, they played a fair number of them. Although it had been sunny all day, a dark cloud loomed over the Side Stage and before you know it, it was raining — the L.A. Guns band members got wet, but they soldiered on with a great attitude. Lewis noted that they would not be deterred by a “drop of rain” while Grant mentioned that by London, England standards this was like a summer day, to which Lewis smilingly agreed. L.A. Guns ended the spirited set with three of their most famous songs — “Electric Gypsy”, “The Ballad Of Jayne” and “Rip And Tear”. I thought that L.A. Guns put on one great performance — they really are a very underrated band and I look forward to seeing them the next time that they come to Toronto.

By this time, fatigue had started to set in for me as Friday was a late night and I was not used to standing around outside for already 10 hours. Rather than rush to see Night Ranger — whom I have never got into despite their very good and popular ballad “Sister Christian” — I took the opportunity to go for a washroom break, take a look at the merchandise being offered (not much) and buy supper at one of the concession stands. I only sat during three to four songs at M3 and the bulk of that time came during Night Ranger‘s set. Not that Night Ranger performed poorly in any way, because they certainly put on a spirited and fun performance, but my lack of familiarity with the band and Damn Yankees, coupled with fatigue, meant that I was happy to rest by sitting down for a few songs. 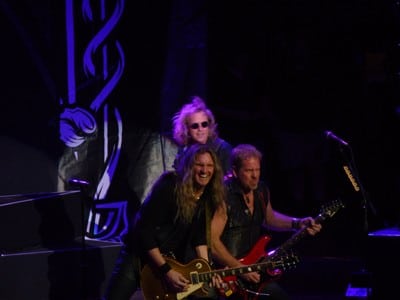 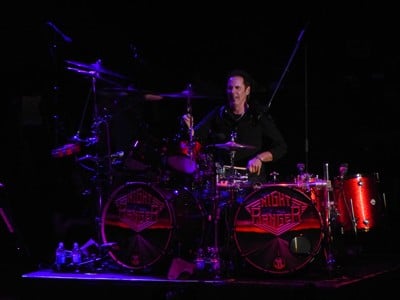 It was only during “Sister Christian” that I was back standing and singing along with what seemed like the entire audience. One thing that I noticed right away was the humbleness displayed by frontman Jack Blades when he addressed the crowd, compared to Bach‘s borderline arrogant attitude. Being a class act, Blades even complimented Bach by saying there was no way he could scream as high as the former Skid Row frontman did during his set. In any case, Night Ranger put on a good show and they certainly had their share of fans that enjoyed their brand of music.

Next up was Slaughter — a band that has not bothered releasing any new material in a long time. Frontman Mark Slaughter was in good spirits and likely holds the record that night for most guitar picks thrown into audience. Even before the singer had sung one word he had thrown at least 10 guitar picks into the audience. The one main issue that I have with Slaughter is that the band tends to jam and seemingly add parts to well known songs, turning a short three minute song into an epic six minutes. Just as I was thinking of going back to the Pavilion Stage to ensure that I did not miss anything from headliner Tesla, Mark Slaughter disappeared from the stage and was walking slowly through the M3 crowd. He even got to where I was standing and had I been a little more bullish and closer to his microphone I could have sang/shouted into it. 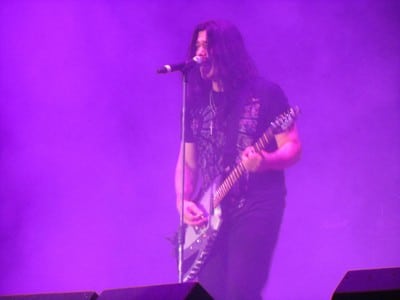 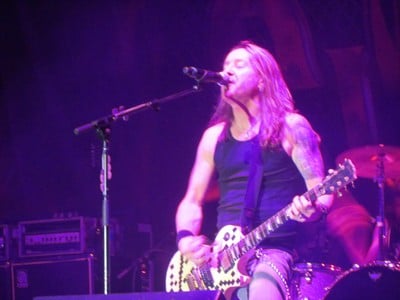 Slaughter played their usual hits including “Burnin’ Bridges”, “Spend My Life”, “Mad About You”, “Fly To The Angels” and “Up All Night”. Had Mark Slaughter not walked into the audience during “Mad About You”, I would have left towards the main stage. However, I elected to stay for the rest of their rather short set. Overall, Slaughter was my least favorite act of the day, but this does not mean that they did not play a good set — because they put on a decent performance.

By the way, the funniest moment for me during Slaughter‘s set was when Mark Slaughter threw a guitar pick towards where I was standing. One Brazilian fan that I met earlier in the day started looking frantically on the ground for the pick. Eventually, someone pointed out that it had landed in the bottom of someone’s half filled beverage cup! In case that you are thinking that I am simply not a Slaughter fan because I ranked their set the worst of the day, the first CD that I ever bought was Vinnie Vincent Invasion‘s ‘All Systems Go’ — and the song “Dirty Rhythm” with Slaughter on vocals is still one of my favorites.

The final band to play was headliner Tesla — another band that I had not seen play in more than a quarter century! To illustrate how long that it had been, I think the last time I saw them was when they opened for Def Leppard on the ‘Hysteria’ tour back in 1988! Although it had been a long, but very fun day, as soon as Tesla started playing their opening track “I Wanna Live”, I felt a surge of energy as I ended up singing along with Jeff Keith for the next 75 minutes. It had been a long time since I heard some of the tracks Tesla performed, but it didn’t matter as it seemed that I knew all of the lyrics — except of course for the new track “MP3”, from their forthcoming album ‘Simplicity’, which is scheduled to be released in June. 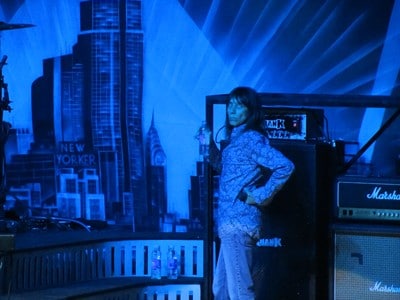 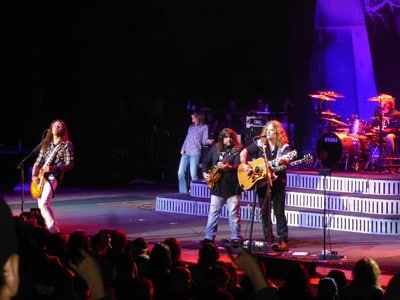 Tesla‘s stage area seemed a lot smaller than the one used by Kix when they headlined the night before. I also forgot just how many great songs Tesla had to offer — and even though they only played two songs from their fantastic debut album ‘Mechanical Resonance’, every song played was a good one. Meanwhile, ‘The Great Radio Controversy’ was well represented on this night with “Hang Tough”, “Heaven’s Trail (No Way Out)”, “The Way It Is” and “Love Song” being played. As Tesla‘s set came to a close, and they quickly played “Little Suzi” before the clock struck 11pm, I simply did not want to leave since I felt that I had experienced one of the most enjoyable days that I have ever had. 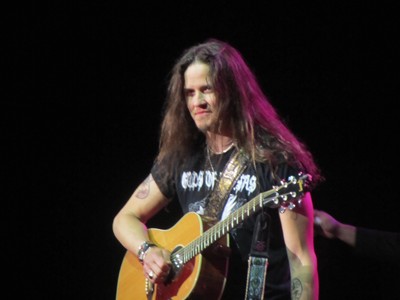 Thank you very much to ‘The Meister’ for providing some of the photographs for Part 3 of my review, and for putting the bug in my ear to attend the M3 Rock Festival. I like to think that it did not take that much to get me there, but I would not have attended the M3 Rock Festival if it wasn’t for Meister’s great stories about his Monsters Of Rock Cruise experiences.