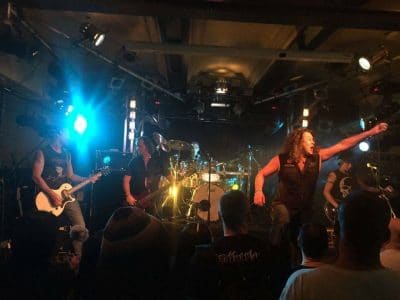 I’ll have to commence part 2 of this review with an apology to Teargas for having missed their set. My brother and I got a little too carried away at the Chapel St markets earlier that day. However, I am pleased I was there to see Serpentine Sky! A pure hard rock band hailing from Melbourne, these guys formed in 1989. To the best of my understanding, they have released the one self-titled album and have been compared by locals to a mix between Skid Row and Van Halen. One thing is for sure; these guys love playing loud and I loved every minute of their set. One of the things that stood out to me was how well vocalist Patrick Creamer was able to effectively change tempo within a song. This was best demonstrated with “Strong is the 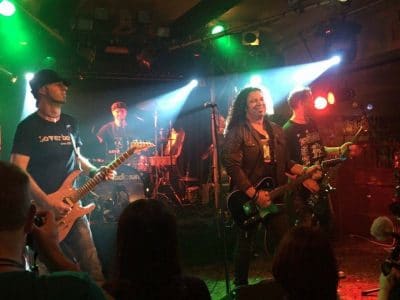 Love.” Other highlights of their set included “Whole Lot Of Love” and “Midnight.” Cannot wait for their next release!

The Radio Sun then returned for their ‘plugged in’ set and from the opening riff of “Caught Between Heaven And A Heartbreak”, you knew you were going to be for a different show to the unplugged set the day before. Guitarist Steve Janevski is fast becoming one of my favourite guitarists to watch with the energy he puts into his craft. Another very enjoyable set from these guys who will be releasing their third record in September 2016. 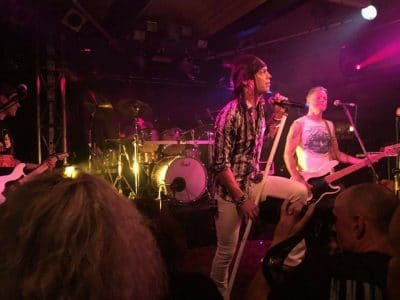 Next to grace the stage was yet another band from Melbourne, White Widdow. Formed in 2008, classic AOR best describes their sound. I was really looking forward to this set and they did not disappoint! Tracks like “Cross To Bear,” “Reckless Nights,” “Broken Hearts Won’t Last Forever” and “Caught In The Crossfire” sounded amazing live and I really enjoyed watching guitarist Enzo Almanzi go about it. This was the first act to feature a keyboardist which is a clearly a major component of their sound. They absolutely nailed their set and I’m looking forward to seeing them again!

The last of the Australian acts was BB Steal. A little back story here. 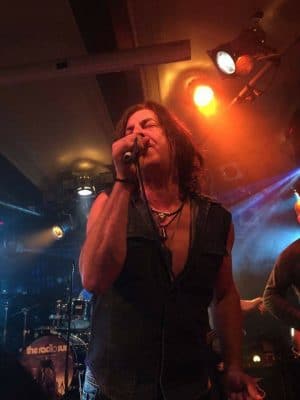 Before BB Steal, vocalist Craig Csongrady was the frontman for Aussie band Boss, who in 1984 released their only album Step On It. If you have never heard of Boss, check out the tracks “Dancing Queen” (not an ABBA cover) and “Kick-Ass Rock N Roll.” After Boss disbanded, BB Steal was formed some years later with a change in sound, a more melodic rock approach in the vein of Def Leppard. In fact, their first album On the Edge in 1990 was produced by Phil Collen of Def Leppard. Anyway, back to the gig! This was another set I was keenly anticipating as On The Edge is one of my favourite melodic rock albums. Much to my satisfaction, they played the entire album but only one track from Step On It — which was not “Dancing Queen” nor “Kick-Ass” which disappointed some of the die-hards. Furthermore, I don’t think the sound engineering pitched Csongrady’s vocals at the right level for the first couple of tracks and on further reflection, I also recall when Serpentine Sky played, the same problem occurred with the guitarist Zakk Zedras’ backing vocals at first. However, I still got to see BB Steal for the first time and meet the band post set. 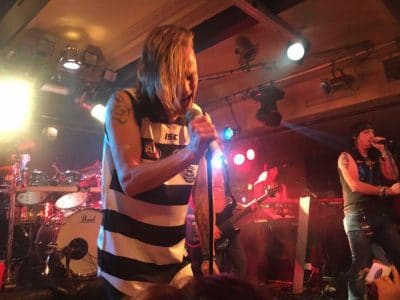 After BB Steal, it was time for the three international acts — the first of which was Erik Gronwall and Jona Tee from H.E.A.T. These guys were joined on the stage by members of White Widdow. I was lucky enough to speak with Erik the day before the show and he mentioned they did one rehearsal on the Thursday. You would not have known. Hearing “Mannequin Show,” “Living On The Run,” “Tearing Down The Walls,” “Inferno”… had me constantly reminding myself that it was two members of H.E.A.T on stage and not the band. Also, the energy that Erik brings across in his performance is huge and on no less than three occasions, he jumped into the crowd mid-way through tracks to sing with the fans! Given that it was billed as Erik Gronwall from H.E.A.T., he also performed renditions of old classics. I enjoyed Mitch Malloy’s “Anything At All” but was eager 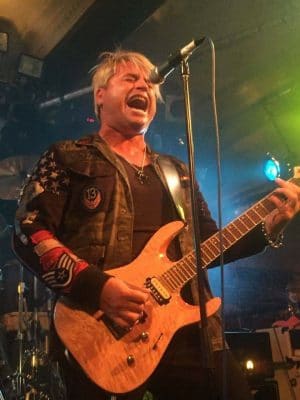 for more of his own amazing work instead of Guns N’ Roses‘ “Paradise City” and Skid Row‘s “18 & Life.” White Widdow bassist Ben Webster could not take the smile off his face and I guess who could blame him? A brilliant show!

After that set, I kept asking people, ‘How much better can this weekend get?’ It wasn’t over yet! Paul Laine then returned with The Radio Sun (Steve Janevski’s fifth appearance on stage over the course of the weekend) and expectations were high after listening to his faultless performance the night before. All the Danger Danger classics came out, “Don’t Walk Away,” “Bang Bang,” “I Still Think About You” as well as “Dorianna” from his solo debut. He even threw in two tracks from his recent works with new band The Defiants. Again, his voice was just ridiculously perfect and even now writing this review after almost two weeks, it is probably the biggest discovery for me over the entire weekend. Please come back to Australia, Paul! 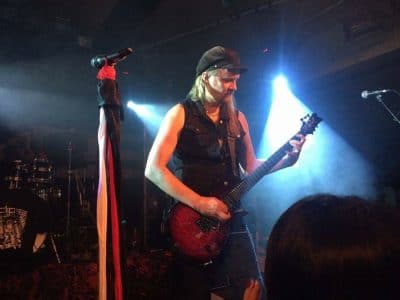 At approximately ten minutes to midnight, Paul Laine and The Radio Sun left the stage to rapturous applause from the now capacity crowd eagerly awaiting the final act of the evening — Eclipse. Even though it was a good forty minutes before Eclipse would start playing, the energy in the crowd seemed to increase the later it got. Standing front and centre to the stage, I wasn’t going to move anytime soon. I never thought I would see Eclipse live but here I was only minutes away. And then it started with “I Don’t Want To Say I’m Sorry” and they simply delivered hit after hit from their last three albums for the entire set. New drummer Philip Crusner produced a crushing performance which included an awesome drum solo and once again, the energy that these guys played with was something to behold. What a way to end two days of melodic rock madness!

What a performance by the Swedish singer, it’s a shame about the Geelong footy jumper though!!!

Erik Gronwall, after seeing him perform for the first time, he is one of the best frontmen going around in the music business at the moment.