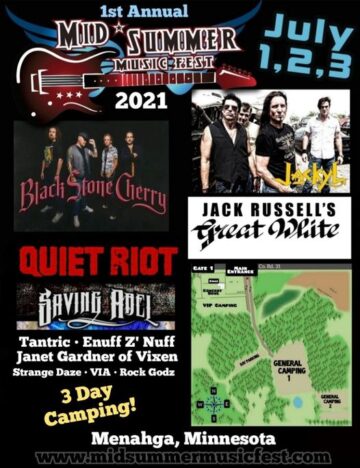 I can’t believe it has been twenty months since my last concert and the best way to get back into the swing of things was to go to Minnesota’s newest music festival. The first annual Mid-Summer Music Fest was supposed to happen last summer, but we all know how that story goes. This three-day festival advertised eleven bands over the three days leading up to the 4th of July. They had VIP camping up close to the concert grounds as well as general camping a short walk away with showers on the grounds.

The festival kicked off with a great ’80s tribute band out of Minneapolis, Minnesota named the Rock Godz. This versatile group of performers entertained the crowd with great covers from Bon Jovi and Journey to Ozzy and Iron Maiden. This band has the total package of great musicians and a dynamite singer that can do it all. Check them out if they play anywhere near you. 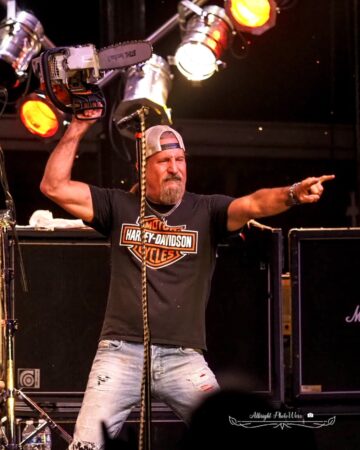 Up next was a well known band that got a late start in the ’80s. As expected, Enuff Z’Nuff closed out their set with “Fly High Michelle” and “New Thing”, but I found the rest of the set more enjoyable than their hits. This was my first time seeing them and was surprised by them opening with a killer cover of The Beatles‘ “Magical Mystery Tour.” “The World Is A Gutter”, “Metalheart” and “Kiss The Clown” are even better live than on the albums. Chip Z’Nuff‘s voice got a little rough towards the end of the set, but they were able to squeeze out a great 60 minutes of rock to feed a music hungry crowd.

Jackyl closed out the first night and brought a new level of energy to the audience. These guys always come to play hard and bring non-stop entertainment. It was total mayhem from Jesse James Dupree‘s countdown to “Blast Off” to the last roar of the chainsaw in “The Lumberjack.” Most of the night consisted of songs off their first album, but they did manage to bring out the fast pace “My Moonshine Kicks Your Cocaine’s Ass”, slowed it down with “Just Because I’m Drunk” and showed off their roots with a little Hank Williams Jr. Watching them perform, you could tell they missed the live interaction as much as we did.

Friday morning we found out the sad news that Black Stone Cherry‘s frontman Chris Robertson‘s father had passed away and they would not be performing Saturday night. Everyone I spoke to couldn’t wait to see them play, but we understood the circumstances and our thoughts and prayers were with the band. 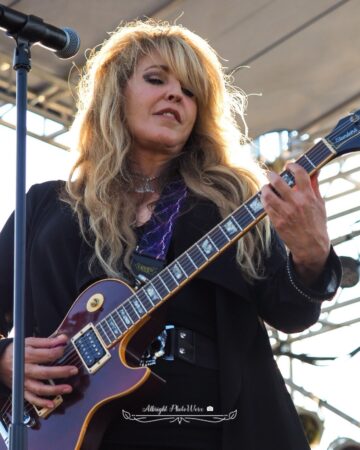 Day Two heated up to 92 degrees Fahrenheit as former Vixen singer Janet Gardner hit the stage with her band. They played a great mix of Vixen hits as well as songs off of her three solo efforts. “Flamethrower” off of her latest album stood out along with “Your Place In The Sun.” Both songs were laced with heavy guitar riffs and melodic vocals and were a great lead into Sammy Hagar‘s “There’s Only One Way to Rock.” Another solo effort song was “A Way To Your Heart” that definitely showed where Vixen got their defining sound from. “Edge of A Broken Heart” got the fans singing along before bringing the house down with their heaviest song of the day, “Rat Hole.” Check it out!

Jack Russell’s Great White rocked the festival with all our favorites. “Call It Rock ‘N’ Roll”, “Heart The Hunter” and “Lady Red Light” kicked things off. Jack‘s voice sounded great throughout the set and the band was tight as they tore through “Mista Bone” mixed with The Beatles‘ “Helter Skelter”, “On Your Knees” and “All Over Now.” The crowd helped out with “Rock Me” and Janet Gardner and her band joined in the fun on “Once Bitten Twice Shy.” It was a great mix of songs off their first three classic albums. 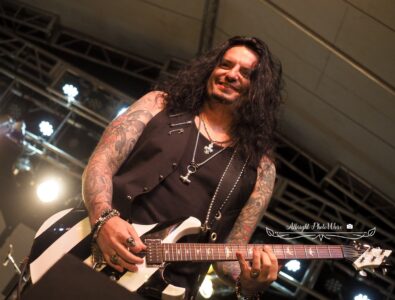 name Quiet Riot. I decided to watch them and decide for myself. “Run For Cover”, “Slick Black Cadillac” and “Mama We’re All Crazee Now” sounded as good as I have ever heard them play. It was great to see Jizzy Pearl back on vocals. I believe he is the best choice to fill Kevin DuBrow‘s shoes as the frontman. Alex Grossi has handled the riffs and solos admirably for years.  Everything was held together by long-time bassist Chuck Wright and new drummer Johnny Kelly. Kelly has played with the likes of Type O Negative, Kill Devil Hill and Danzig. After cruising through “Love’s A Bitch”, “Conditional Critical” and “Party All Night”, Jizzy announced they were going to play a song from his all time favorite band. To my surprise, they busted out “Blackout In The Red Room” from Jizzy‘s own band Love/Hate. I really hoped to hear a couple more but this is a Quiet Riot show and there were more tunes to play. As the band closed out the night with “Cum On Feel The Noize” and “Metal Health (Bang Your Head)”, I finally came to my own conclusion about the band.  As long as they got the blessing from past members to keep the music alive, I believe this group of musicians represents the name Quiet Riot to the fullest and they will have my support.

Day Three was the hottest day yet. I believe it was 95 degrees Fahrenheit and I have no doubt the heat index was close to 100. We spent most of the morning seeking shade, hydrating and visiting with new friends we met at the festival. After two days of music from the ’80s, Day Three was filled with the sounds of post-grunge hard rock. 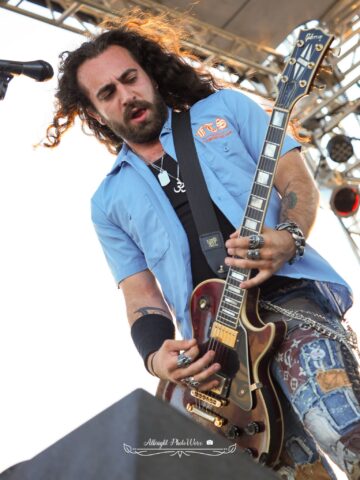 VIA out of Minneapolis started off the day. They had a mix of original songs and covers from Tool, Alice in Chains and Radiohead, which definitely showed how they shaped their own sound. If you are into this style of music, you must check out their song “Shroomates” and their video for “Get Control.”

Strange Daze rocked the stage next with their hard rocking sound. They are a staple in the Minnesota music scene and can be seen this summer opening for Buckcherry, Hinder and Steel Panther.

Tantric broke onto the music scene in 2001 with their self-titled album and has put out seven more with one more on the way.  Singer Hugo Ferreira is the only remaining member from the early years, but he has gathered a great group of musicians to keep the music alive. They had a great mix of songs that covered their entire catalog. During their set, I noticed a new mix of younger faces I had not seen the previous nights. They were definitely there to see the newer breed of rock music. Tantric did manage to tie themselves in with the ’80s bands with a great rendition of “Is This Love” by Whitesnake. Even though I’m not too familiar with Tantric‘s music outside of what has been on the radio, I thoroughly enjoyed their live performance.

With Black Stone Cherry unable to perform, Saving Abel was asked to headline. They definitely had the energy and stage presence to handle the task. “New Tattoo” was the perfect song to start off their set and to get the audience energized. They had to 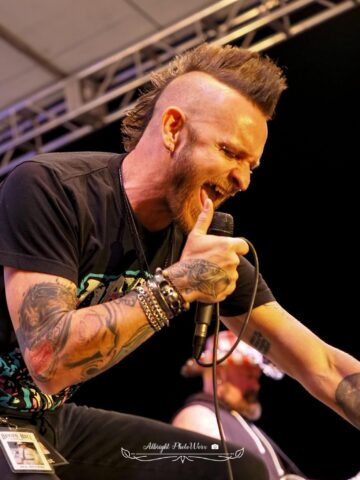 dig a little deeper into their albums to pull off the headliner set, but they made sure to keep their most popular songs in the mix.  Singer Scotty Austin got the crowd involved during “The Sex Is Good” before breaking the news that he will be leaving the band in a few weeks to pursue a solo career. He made sure to let everyone know that he and his bandmates will always be family and there are no hard feelings toward one another. A heartfelt dedication to American veterans led into “18 Days.” Scotty asked everyone to light up the night sky with their phones and lighters as they sang along in unison. “Addicted” brought the overzealous frontman off the stage and face to face with their fans and led them in one last singalong to close out the night.  For Saving Abel fans, this is not the end. Scotty‘s tremendous stage presence will definitely be missed, but it has been announced that original lead singer, Jared Weeks, will be making a return to the band.

If you are looking for a new festival to check out next year, I highly recommend the Mid-Summer Music Fest. It will only become bigger and better as long as it gets the fan support it needs. Trinity June has put his heart and soul into making his festival vision come to life. This event has friendly staff and security, food trucks serving delicious food, and plenty of beer and cocktails to choose from. I really like the idea of having a mix of old school rock mixed with the newer generation to help keep things fresh. Next year’s festival will be moved to July 21st through the 23rd and tickets are already on sale. Go buy your tickets and let’s help make this the next great music festival in Minnesota.