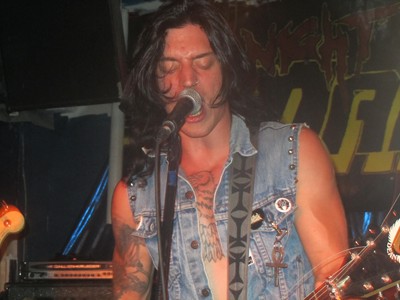 MIDNIGHT MALICE POWERS THROUGH AS TRIO

For the first time ever, and perhaps last time, Midnight Malice were going to perform as a trio rather than a quartet. Back in May 2014 when I interviewed lead vocalist and guitarist Caleb Beal and drummer Hunter Raymond (click here to read the interview) the band was looking for a full-time bassist to replace Jared Verlage whom they had recently parted ways with. Since that time the bassist position has been filled, but on a temporary basis — with former Anvil member Glenn Five and current Old James guitarist Brian Stephenson taking turns.

By the time that Midnight Malice were poised to play at the aptly named and infamous Bovine Sex Club — the venue where most up and coming Toronto based hard rock and heavy metal bands cut their teeth and hone their craft — the band had now parted ways with guitarist Chris Nascimben. This time around, Midnight Malice turned to The Rough Boys vocalist/bassist Tom Gervais to fill in on the bass for the show. Of course, there was still the issue of missing one of the band’s guitarists but they elected to proceed as a trio for the first time ever. 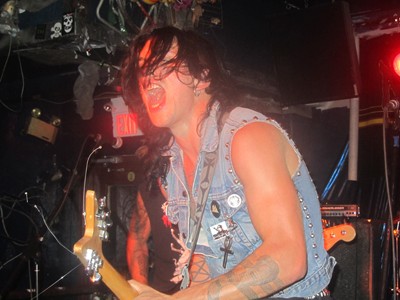 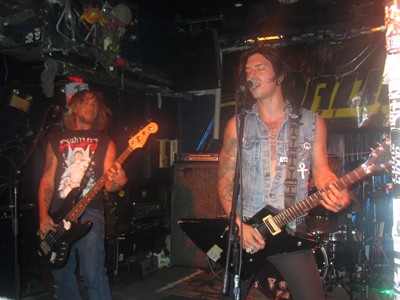 These are the type of issues that Beal and Raymond are willing to forge through in order to find like-minded and driven individuals in their quest to bring Midnight Malice metal to the masses. Given that the band will be playing their next scheduled shows with both Gervais on bass and Stephenson now on guitar, I give a lot of credit to Midnight Malice for not cancelling their appearance at the Bovine Sex Club and preparing simply as a three-piece for this one gig. That is what dedication and commitment is all about!

At 9:40 pm, I walked into the Bovine Sex Club twenty minutes prior to Midnight Malice‘s scheduled set which was to open the festivities for the night. Two other bands that I was not familiar with — Chainbreaker and Bat — were scheduled to play after. Alas, the venue was virtually empty when I walked in and I was secretly hoping that the Midnight Malice guys would not have to play to an empty venue. My concerns ended up being for naught as by the time Midnight Malice hit the stage about 30 minutes later the place was brimming with lots of people. Unlike what plagues many opening bands at smaller clubs that I have seen in the last few years, there was no empty awkward space between the stage and the crowd for Midnight Malice‘s set due to the audience hanging back in the venue. The crowd was close to the stage pretty much right from the start. 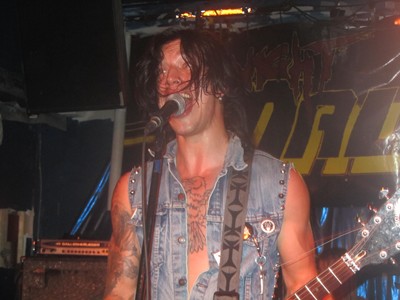 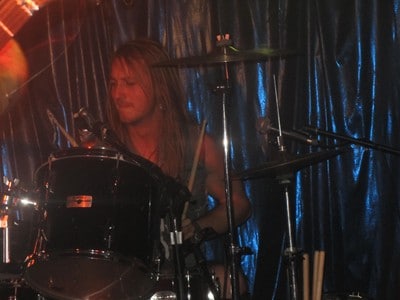 The Bovine Sex Club’s stage is pretty small so the fact that the band was playing as a three piece allowed them a little more room to maneuver. Nestled in the back, over what looked like curtains covering the front windows of the venue, was a big Midnight Malice banner. The band opened the night with a song that I was unable to identify but it sure sounded good! Next up was “Dead Of Night” which is one of my favorites from their debut CD ‘Proving Grounds’ (click here to read my review of the album). Funny enough, even though I have listened to the band’s debut countless times — and I found out after the band’s set that they only played songs from that album — I was not able to name at least half of the songs played, although they all sounded quite familiar. I chalk that up to the songs not always having an obvious chorus “identifying” their title. Couple that with the fact that I usually play the band’s album without looking at the song titles, identifying which songs were actually played during the evening proved to be challenging.

Midnight Malice delivered what I felt was an old school performance, letting the music do the talking — and they really had to, given the limited set times offered to each band on this night. Beal did address the crowd a number of times, including introducing Tommy G — aka Tom Gervais — as the bass player for the night. In addition to quickly introducing a few of the songs, Beal also thanked the crowd for coming out in such good numbers so early and “raging” with the band. One thing that I noticed throughout the show was that all three band members were quite accomplished musicians. Raymond was a monster bashing the drums in the back and you could really hear his drumming throughout the songs. Beal‘s voice sounded spot on like on the band’s debut CD and he handled all the guitar solos really well. It was cool seeing Gervais‘ hands plucking his bass strings at what seemed like 100 miles an hour — and due to his look and demeanor while playing he reminded me of a young Geezer Butler. 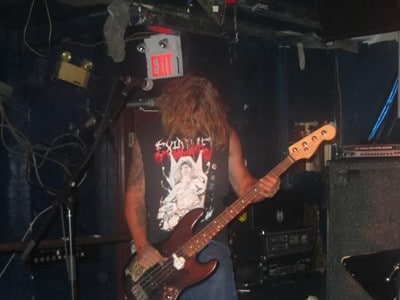 Given that Midnight Malice were performing as a three piece for the first time and their debut was recorded as a four piece, I wondered how the band would sound live on this night. I had expressed my thoughts in that regard to Beal in the minutes leading up to the show but he assured me that due to Gervais‘ bass playing style there would not be much difference. He was right, as the band’s songs sounded very close to what you hear on the CD. The only time I thought that the extra guitarist’s presence could be felt was when Beal was playing guitar solos, but the band did not seem to skip a beat as a three piece. Midnight Malice ended their short set with blistering renditions of “Never Say Die” and “Lady Killer”.

Although I knew that there were two more bands scheduled to play, I did not have the chance to familiarize myself with them in the days leading to the concert and my most precious commodity these days is time. Accordingly, given that I had gotten to see the band that I wanted to see perform, that was good enough for me on this evening! Midnight Malice seem to be moving up in their climb for success as the band is scheduled to play the Japanese Assault Fest 14 in Tokyo, Japan on November 1st. If you like old school metal in the New Wave Of British Heavy Metal style, make sure to catch Midnight Malice live whenever you can! 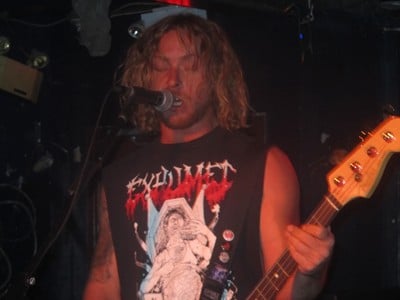 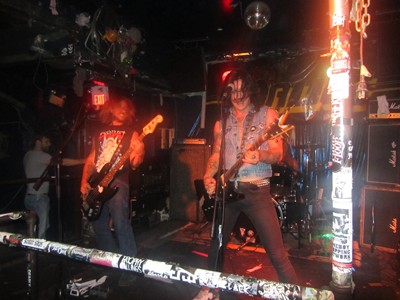