There is something redeeming and gutsy about going out and playing a gig acoustically. With only an acoustic guitar (or acoustic guitars) and vocals, there really is nowhere to hide for the performer. If the singer can’t hit certain notes, it will be more than readily apparent. Even though I had a couple of White Lion‘s albums back in the day (which I lost along the way). I have never been a big fan of the band. I knew that the group’s lead singer Mike Tramp had released a couple of solo records in the last few years. I also knew that there was no chance of White Lion reforming due to guitarist Vito Bratta being out of the music scene but I had no idea what led to the band’s break up, nor the moral high road that Tramp would take while still in White Lion and in his subsequent years after that band’s demise.

Accordingly, it was with a sense of curiosity that I had purchased a ticket many months ago to see Tramp play an acoustic set at the Rockpile West in Toronto. For the occasion, I dusted off my copy of The Best of White Lion which I had not played in many years. I have to admit that I was very pleased to read an announcement later on that the Killer Dwarfs‘ frontman Russ Dwarf was going to be opening for Tramp since I was way more familiar with the Killer Dwarfs‘ material and Dwarf had released an absolutely stellar acoustic CD entitled Wireless a couple of years ago.

I arrived at the Rockpile West at around 9:30 pm and went to say hello to the Killer Dwarfs‘ always friendly manager Rob Zakojc who confirmed that he would be playing onstage with Dwarf and that this was their first acoustic set of the year. I arrived probably during the middle portion of the set of a Toronto based band called The Outliars. Unfortunately for the band, there was no one listening to them in the general standing area in front of the stage and everyone seemed to be either seated at tables or standing near the bars further away from the stage. That is definitely a tough atmosphere to play in. The Outliars definitely play a more subdued kind of rock than what I would listen to. I believe that they ended their set with two covers but I can only remember one of them which was Tragically Hip‘s “New Orleans Is Sinking” and which could have definitely used a second guitar to beef up the song just like the original. The Outliars played a good set but I would have liked them to pretend that the audience floor was packed and see them more into their performance. 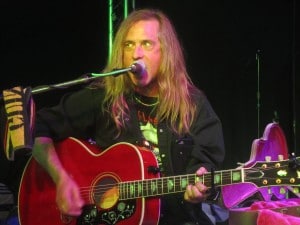 Next up was Russ Dwarf who was accompanied by Zakojc on bass acoustic guitar and Bob Frenette on lead acoustic guitar and who were referred to as “Robby” and “Bobby” by the diminutive but powerful sounding frontman. I must say that I was surprised that most of the crowd did not seemingly move from their positions when Dwarf got up on stage and seated himself in between Zakojc and Frenette for what I considered was a very good set of acoustic songs. Considering that I know that there were some big Killer Dwarfs fans in the audience, I felt at times a little bit alone standing near the front of the stage with most people seemingly further back. Prior to starting or just after the set opener “Stand Tall (Stick To Your Guns)”, Dwarf reminded the crowd that they could come up near the stage. Despite the rather “tough crowd” — and anyone that has been to quite a few Toronto hard rock / metal gigs can likely attest to that happening sometimes — which Dwarf repeatedly stated in between song banter, I thought that the threesome put in a really good performance. 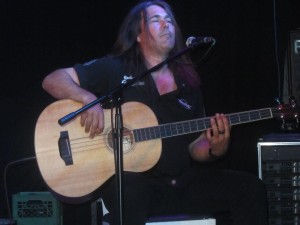 There is no question that Dwarf still has an amazing voice after 30 plus years of singing and his voice carried all the songs. After “Stand Tall (Stick To Your Guns)” was the very good and moody “Four Seasons” from the very underrated Killer Dwarfs‘ record Method To The Madness. A nice surprise was hearing a cover of The Beatles‘ “Norwegian Wood (This Bird Has Flown)”. Next up was “Driftin’ Back” and a surprise cover of Bob Dylan‘s “Knockin’ On Heaven’s Door”. About halfway through and for the remainder of his set, Dwarf started hinting that “he did not have it today” presumably in terms of being funny and getting a strong reaction from the crowd. Frankly, I thought that he was funny thinking that he was not funny and poking fun at himself in that regard. Dwarf did share some rather unique facts during his in between song banter including that he wears size six shoes, which are apparently a bitch to obtain. 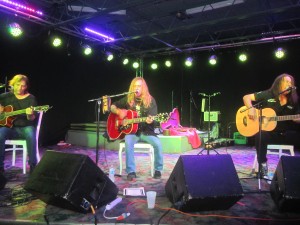 Dwarf and his two cohorts closed off their rather short set with the fabulous threesome of “Dirty Weapons”, the ultimate anthem “Keep The Spirit Alive” which Dwarf dedicated to all the Canadians that were following and appearing at Killer Dwarfs‘ shows in the States, and the goose bump variety ballad “It Doesn’t Matter”. After the set was over, I went to take a quick photo of the setlist that had previously been posted on the stage and Frenette was nice enough to give it to me. To my surprise (again), the setlist contained thirteen songs rather than the only eight that the trio played! Sadly, a number of songs were not played including the Killer Dwarfs‘ classics “Starting To Shine” and “I’m Alive”, and covers of presumably the Rolling Stones‘ “You Can’t Always Get What You Want” and AC/DC‘s “Highway To Hell”. Perhaps it was the sometimes lackadaisical crowd responses that pushed Dwarf to shorten his set on this night. Whatever the case, it was a real pity that not more songs were played from Dwarf and company because they sounded really good and I would go see them perform again in a heartbeat! 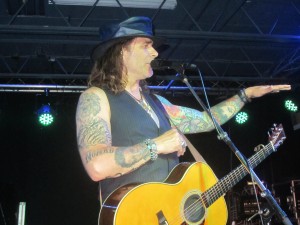 A little after 11 pm, former White Lion frontman Tramp made his way on stage and to my surprise (again), a large part of the crowd shifted close to the stage before Tramp played a single note. Apparently, there were a lot of people that came to the Rockpile West to see Tramp play. The one thing that struck me upon seeing Tramp was how he resembled WWE wrestler Shawn “Heartbreak Kid” Michaels. About the only distinctive feature differentiating Tramp from Michaels is the amount of tattoos on both of Tramp‘s arms. If I did not know better, I would have thought that it was the Heartbreak Kid up on stage. It felt a little strange to only see Tramp up on stage alone with his acoustic guitar. This was only the second acoustic gig that I was attending after catching Jack Russell play an acoustic set to open the M3 Rock Festival earlier that month. This was also really the first show where I was only expecting acoustic performances since I did not know which bands were opening for Dwarf and Tramp heading into the Rockpile.

Although I had been worried that there might be many songs that I would not recognize since I had only recently heard The Best Of White Lion, my concerns turned out to be for naught since ten out of the fifteen songs that Tramp played could be found on that greatest hits collection. Tramp opened his acoustic set with the White Lion track “Hungry”, which admittedly took me a while to figure out which song this was. Tramp‘s voice sounded quite good although I thought that Dwarf‘s voice sounded better earlier on in the evening. 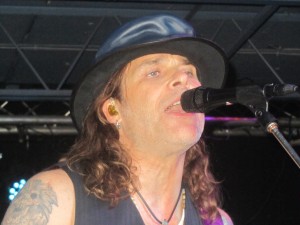 What became obvious early on — and it had been advertised as such — was that Tramp was going to regale the audience with some fun war stories from the past. I won’t bother repeating most of what Tramp had to say to the crowd since I assume that his stories stay the same for most of his gigs on this tour but suffice to say that it was a lot of fun hearing what he had to say. The one story that I will share was the one that struck me the most and which seemed to have altered the course of White Lion going forward and certainly impacted Tramp as a performer and person. Hopefully, I’ll do justice to Tramp‘s story as I will likely botch some of the facts since this is based strictly from what I remember hearing. At the height of White Lion‘s success, Tramp had a dream one night where he was a grandfather with his grandkids asking him to play the music that he had done with White Lion. Tramp was embarrassed about what he was singing about in those songs and from that point on, he decided to stop singing about the usual hair band topics such as partying and women, and focus on more serious topics. 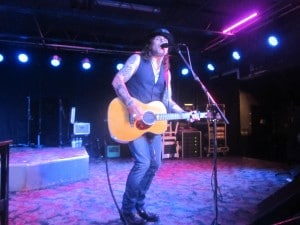 It felt weird hearing all of the White Lion tracks being played acoustically. I think that some worked better than others. Two of White Lion‘s most popular tracks, “Wait” and “Radar Love”, were fun to hear acoustically but paled in comparison to the original White Lion versions of those songs. Just before the guitar solo portion of “Wait” and while still playing that song, Tramp even warned the audience that he could not replicate the solo from White Lion‘s guitarist Vito Bratta so we just had to imagine it or something like that! My favorite tracks played by Tramp were therefore not the ones that I thought they would be. Out of the White Lion tracks, I really enjoyed “Little Fighter”, “Cry Freedom” and “Lady Of the Valley”. I also really enjoyed two tracks that I had never heard before which were the aptly named “Hymn For Ronnie” — Tramp‘s tribute song to the late Ronnie James Dio — and the Freak Of Nature track “What Am I”.

Mike Tramp frontman from the rock band White Lion performing his band hit ‘Wiat” from his solo acoustic show in Toronto May 31, 2015.at Rockpile West.Awesome… 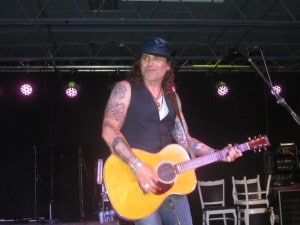 Merchandise sales is definitely a big way for an artist to stay afloat in these days’ music climate with record sales simply being a fraction of what they were back in the 80s for hard rock and heavy metal acts. I am always impressed when artists recognize that and show a business side to them. On multiple occasions throughout his I believe almost two hour set, Tramp told the audience that right after his set, he would be going to his merchandise table to meet everyone and that he would sign whatever people wanted and take photos with anyone. True to his word, right after his set, Tramp put his guitar down and seemingly was on his way to his merchandise table. I did not stick around for the informal meet and greet session at Tramp‘s merchandise table but you got to hand it to Tramp as what he apparently does after each one of his gigs is a fantastic way to move a lot of merchandise and a nice treat for all of his fans who want to meet him in person.

Overall, I was glad that I got to see Tramp perform acoustically although I clearly would have preferred a plugged in electric performance from the man. In conclusion, I must say that I found it quite honourable that the now rather nomadic Tramp would recognize in the height of White Lion‘s success that what had brought the band to that point in terms of lyrics and subject matters could not continue anymore even if this might jeopardize the band’s future going forward. If you are not down with that, I’ve got two words for you: too bad.