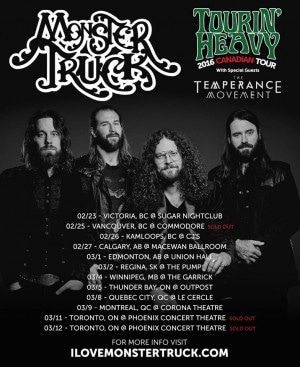 Monster Truck along with opener The Temperance Movement rolled into Thunder Bay and delivered a good old fashioned high energy rock show that turned back the clock in time sonically yet with an eye towards the future.

The Temperance Movement hailing from the U.K were a band I was not familiar with but as soon as the boys hit the stage shortly after 8pm, my best friend of many years Tbone and I were enthralled at the show lead singer Phil Campbell was putting on. As soon as the boys launched into “Three Bulleits”, Campbell worked the stage flaying his arms — at times with a tambourine and even a harmonica — to the beat of drummer Damon Wilson‘s beat. Put it this way, Campbell had the stage moves down. Think Iggy Pop flinging around in body with the voice of the Black Crowes‘ Chris Robinson mixed with a tinge of Rod Stewart whereas Paul Sayer and Matt White made an excellent one two guitar punch. Bassist Nick Fyffe held down the bottom end on the bass. 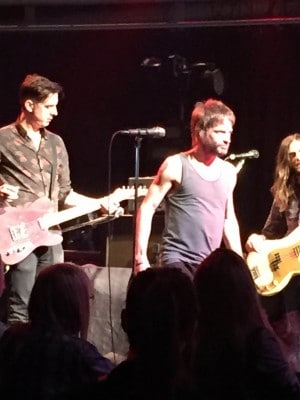 The Temperance Movement played tracks from their two releases: 2013’s Temperance Act and the recently released White Bear. The band put on such a rocking show with good time tunes and stage presence that I bought three of their CDs at the merch booth consisting of two copies of White Bear (one for Tbone) and also a copy of the debut. It must be noted that after The Temperance Movement were finished, there was their guitarist Paul Sayer at the merch booth selling t-shirts, signing CDs and shaking hands with people. I asked him how the driving across Canada was going as the distances between shows can be long. Sayer answered that it wasn’t too bad as they have a bus now but he added that last year, they criss crossed the United States for four months in a van and it almost killed them! Sayer was a nice all around guy. Also, Campbell cruised about the crowd shaking hands and being a real cool chap when we talked to him. Great way to make fans and in mine and Tbone’s case, it worked! 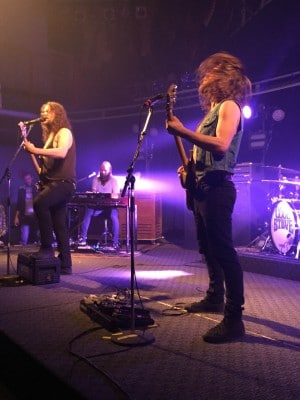 A short while later to the familiar sounds of Rainbow‘s “Man On A Silver Mountain” and “Long Live Rock N’ Roll”, Monster Truck hit the stage launching right into “Don’t Tell Me How To Live” and just like on the record, Jon Harvey and his voice just rock with a smoothness and style of his own while holding down the bass. From there, the boys headed right into “Old Train” from the Furiosity album. Guitarist Jeremy Widerman channeled through his Gibson SG Angus Young as he tore around the stage of the Outpost all night dropping down to his knees soloing and just giving er all night! The dude is a machine and an awesome guitarist as well. The third song “Why Are You Not Rocking?” was kicked off by drummer Steve Keily.

Monster Truck just kept it going all night and if my memory serves me correctly, they played at various points of the show the first eight songs from their current release Sittin Heavy. All the songs came across awesome live. The group’s harmonies were spot on. “She’s A Witch” and “Black Forest” displayed some nice keyboard work by Brandon Bliss. “The Enforcer” just blitzed at a pace of a runaway truck. One of the cool spots of the show was when The 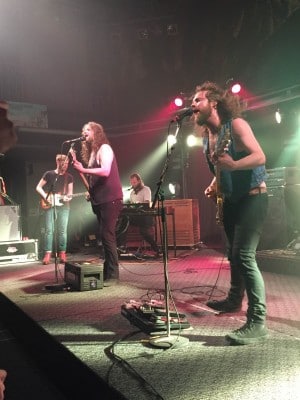 Temperance Movement‘s Paul Sayer jumped on stage and played the solo to “For The People.”

Monster Truck wrapped up with “Righteous Smoke” and — one of my favorites — “The Lion” which featured some awesome drumming from Keily. Before they left the stage, Harvey thanked the crowd for coming out and advised they would be back soon. After about two minutes away, Monster Truck came back out to the stage at which point Harvey stated, “See? I told you we would be back!” Harvey had a real  good stage rapport with the crowd all night. Monster Truck played a couple more tunes and ended the show with “Sweet Mountain River” before splitting the stage for good. The entire band really showed up and put on a great concert!

Actually, both bands put on real good show and more of a bonus, it was on a Saturday night! Catch this tour or at least catch The Temperance Movement or Monster Truck whenever they’re around your neighbourhood. You won’t be disappointed!